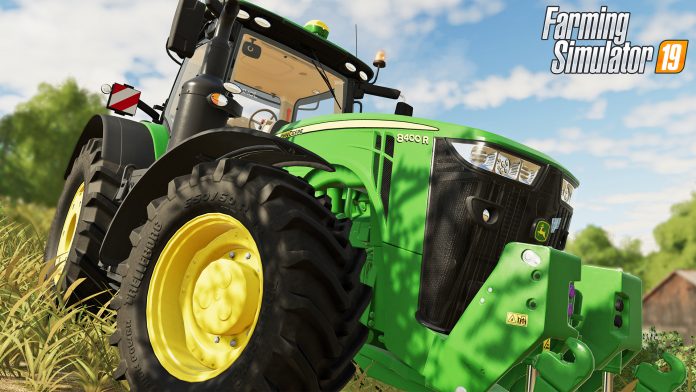 In the wee hours of the morning in Los Angeles (where the Electronic Entertainment Expo, or E3, is taking place) – or at 12 o’clock noon in its native Central European Time – GIANTS Software released its E3 trailer for Farming Simulator 19. The trailer is made up of computer generated imagery (CGI) and doesn’t feature real gameplay, however it contained several enormous announcements within it.

Firstly (and most importantly), the trailer confirmed what fans of the series of agricultural simulation games have been requesting since its inception: the inclusion of John Deere equipment. John Deere has been, unequivocally, the most highly requested brand for the game over the years, and I have no doubts that this news will excite seasoned armchair farmers and newcomers alike. The tractor shown in the trailer is the John Deere 8400R, from the 8R line of row crop tractors that are described on John Deere’s website as “world-class machines designed to provide the hydraulic capacity and horsepower to handle large planters and implements.” I would imagine that John Deere wouldn’t enter the series quietly, and so if I had to guess, I think it’s safe to assume we’ll see a number of John Deere tractors and implements as the equipment list is slowly revealed in the lead-up to Farming Simulator 19’s release. A press release from GIANTS reiterates that Farming Simulator 19 “takes the biggest step forward yet with the franchise’s most extensive vehicle roster ever” and brands such as Case IH, New Holland, Challenger, Fendt, Massey Ferguson, Valtra, Deutz-Fahr, Krone and more will remain in the game as well.

While the addition of John Deere to the series is incredibly exciting, GIANTS didn’t stop there. The trailer also shows a group of farmers using Case IH Module Express 635 cotton pickers to make quick work of a field of cotton, confirming it as a new crop for the upcoming game. This has also been a very highly demanded addition, particularly by many players in North America where cotton is a popular crop. While it wasn’t featured in the trailer, GIANTS has confirmed via its press release that oats will also be added to Farming Simulator 19, providing yet another option for players in what to grow and harvest.

With the addition of the Big Bud equipment via DLC for Farming Simulator 17, and now with the revelation that John Deere and cotton will be added to Farming Simulator 19, it appears that GIANTS is taking significant steps in broadening the reach of the games to wider audiences, and that the developer hopes to attract more players from areas such as North America and Australia. Having typically been most popular in Europe, the recent success of the series has clearly afforded GIANTS the opportunity to secure more big brands, and further enhance the game in significant ways.

The trailer also appears to drop several other hints and confirm previous knowledge – it had previously been confirmed that dogs and horses would be in Farming Simulator 19, and they’re shown more prominently in the trailer. The press release provides additional detail, stating that players can “Tend to your livestock of pigs, cows, sheep, and chickens – or ride your horses for the first time, letting you explore in a brand-new way the vast land around your farm.” This seems to indicate that players may not be able to tend to horses in the same way as the other livestock (e.g., breeding them to sell for profit), however it remains unclear.

At another point in the trailer, there is a distinct pause on a “For Sale” sign (with a “Sold” sticker across it), which may be hinting towards the ability for players to purchase farms and/or upgrade their facilities. Further to this, a time-lapse segment of the trailer shows doors being open and closed, ladders going to a barn roof, and a pulley system at the top of the barn moving around. It’s hard to put much stock in this, but it could be providing additional hints on the potential for players to modify their farm (or at least go into buildings).

Overall, the trailer showed off some enormous news for the Farming Simulator series, and I’m incredibly excited by what was shown. I’m looking forward to providing more coverage as more information is released!