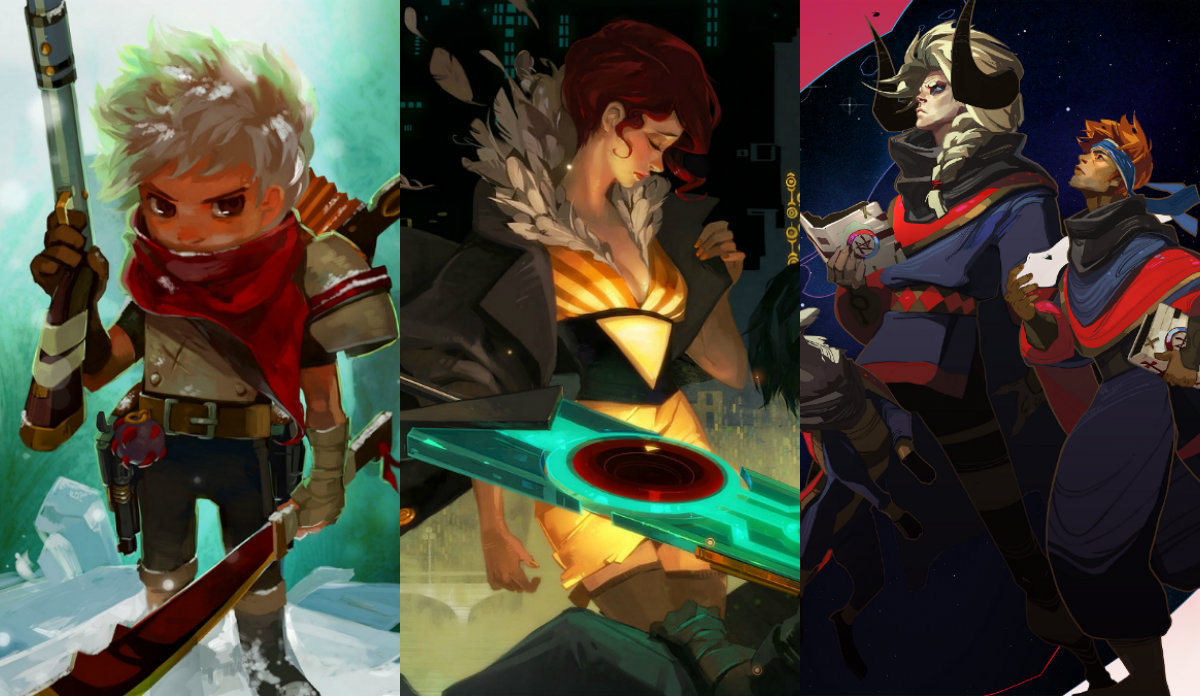 I’d wager that not many had heard of the developer prior to this point, but as he shared his and the studio’s history and the heart that they had poured into their first title, I couldn’t help but feel hopeful for them. A small group of talented people who’d worked their way through the bigger side of the industry, but wanted the chance to make something personal, even at the risk that they’d go broke doing so.

It was a tremendous relief, then, that Bastion proved to be a phenomenal experience.

The piece of art that this handful of people had managed to create was something that struck a chord with me, deep down. Its art was outstanding, and painted every person and environment in its world with immeasurable color and character. Its story was emotional and intriguing without getting in the way of the fast-paced gameplay. And the music? That soundtrack on more than one occasion caused me to stop playing the game so that I could simply sit and enjoy it. It didn’t just paint the scene, it felt at times like it was a part of the story and your journey through it, rather than just ambiance.

Much of the story’s weight came thanks to the phenomenal voice acting of one Logan Cunningham, who took the role of Bastion‘s narrator, Rucks. Throughout your journey, his delightfully gravely voice and southern drawl recounted the tale of The Kid as you were playing it, both sharing background on the world and its former civilization as well as commenting on the actions you took. The awards this small title won were well earned, and Bastion‘s success spurred its creator on to greater things.

Two years later we found out what form those greater things would take. On March 19, 2013, Supergiant Games released a trailer for its next adventure, Transistor. Composer Darren Korb’s music took center stage in the reveal, held aloft by the breathtaking vocals of Ashley Barrett. The beautiful art that immediately grabbed everyone’s attention with Bastion returned as well, but in a much more futuristic and cyberpunk style this time around. In just a minute and 17 seconds, Supergiant Games had won us all over again. Many like myself shot across the internet to share our excitement and search for more of the song that would stay with us for a full year as we eagerly awaited the release.

Once again, an emotional masterpiece awaited us. Transistor showed that the team at Supergiant Games knew their strengths, but refused to simply repeat what they already knew they could do. The writing, art, and music were all as superb as before, but the gameplay was something new. Unlike the frantic, fast-paced combat of its predecessor, Transistor brought a more thoughtful and strategic approach to the table.

The soundtrack this time around featured many more vocal tracks, as the story itself revolved around a singer. Again the tracks felt like a true part of the experience. Ashley Barrett’s vocals brought the protagonist to life, despite her never really speaking a word within the game, as her story and emotions were told well enough through the music and her companion, the Transistor itself. The Transistor, by the way, was voiced by returning talent Logan Cunningham, though you’d be forgiven for not recognizing him given how different he sounded in this role.

Despite a totally different setting and gameplay, Transistor was still unequivocally Supergiant. Though different experiences overall, they shared the same heart and soul. The debate over which of them stood above the other was one I opted out of, but let it be said that both currently sit neck and neck at about 95% on Steam right now.

After another heartbreaking, but utterly enjoyable experience, we were left with yet another two year wait for the next announcement, this one in the form of the recently released Pyre. Despite my utter love for Supergiant Games, I’ll admit to having been a tad unsure at the prospect this time around. While both previous titles stood apart from one another, they shared a similar perspective and sense of control, one that was moved away from a bit with Pyre.

You’ll likely be unsurprised to hear that, once again, Supergiant Games nailed it.

Pyre sees a group of exiles come together in a dangerous realm called the Downside, where rites are held that separate the worthy and enlightened from those who more deserve their sentence, granting a chosen few freedom to return to their home in the Commonwealth. The gameplay this time involves 3v3 contests, where you control one character at a time — swapping between them at will — to hurl a celestial orb into your adversary’s pyre. In addition to keeping control over your team’s placements and the orb itself, you must carefully manage each person’s aura — a sort of sphere of influence around them which KO’s any who come into contact with it and can be cast forward as a weapon, though it disappears while holding the orb.

It has drawn comparisons to sports games, and it’s not hard to see why. Despite how different and strange it might seem at the outset, I can’t deny that I was immediately drawn into the tense, exhilarating competition. What’s more intriguing, however, is that this is only half of the game. Between rites, your party of exiles must traverse the Downside, learning its history as you choose which paths to take along the way, which may bring reward or ruin.

This world is brought to life thanks in large part to the gorgeous art that we’ve come to expect from Supergiant, though the writing deserves equal credit here, as it’s filled to the brim with fascinating lore that spells out the history of the land you traverse and the people who started the rites. The characters you meet along the way are numerous — especially compared to the small rosters you’re no doubt used to from Bastion and Transistor — and each has a reason for living in exile and a unique drive to win back their freedom in the rites. This is a game that, on more than one occasion, genuinely made me consider losing on purpose out of pity for those I faced. One that made me recognize that I was as much the villain in my adversary’s story as I was the hero in mine.

Yet again the music beautifully paints each scene, sometimes taking part directly in the story, and yet again we experience the talented voice work of Logan Cunningham who, more than ever, is near-unrecognizable, but still absolutely knocks it out of the park. I’ve rarely so looked forward to being taunted by someone as I was here.

Pyre proves once more that the small team at Supergiant Games are not to be held back by what they know they can accomplish. As I understand it, they numbered just 7 when making Bastion, and with Pyre they’ve only increased their roster to 12, and yet they still manage to have more ambition than many much larger studios around today. This team isn’t satisfied with simply repeating what you already love about them, they want to push themselves to create new experiences for us all. That’s something that I have tremendous respect for in an industry that all too often sees familiar releases back to back. The drive to make something new is to be lauded, and laud is exactly what I’ll continue to do in regards to Supergiant Games, because they most definitely deserve it.