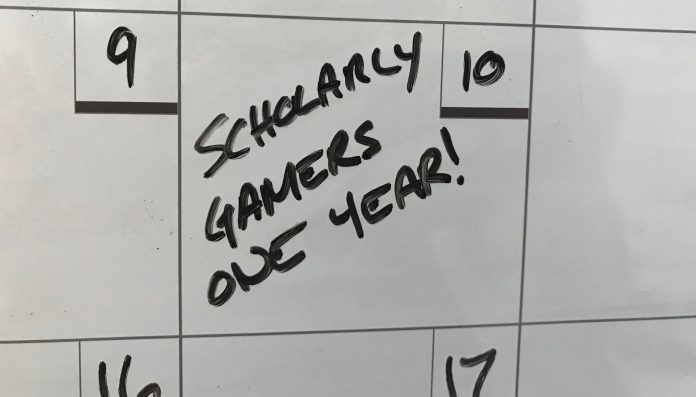 To get a solid understanding of the ground we tread today, it’s often quite helpful to look back to the road we’ve been travelling. After a year of operation, we have a great many things to be thankful for (and proud of) within the Scholarly Gamers community that I’d like to share with you all.

Allow me first to introduce myself to those who don’t know me; my name is Markus, and I head up the IT side of Scholarly Gamers, writing what I can when the time permits.

It was a little under 18 months ago that Scholarly Gamers first got wheels under it; in October of 2016 a few of us friends put together some plans and a general vision for what we wanted to build – a gaming community that set itself apart from the slipping standards we saw on many gaming-related sites. We’d been oversaturated by friends sharing half-baked ‘prediction’ posts or clickbait headlines urging us to find out exactly why I won’t believe my eyes about some given ‘news’ that tells of a slow day in someone’s office. As fellow academics from varied backgrounds, we sought to build up our ranks with like-minded gamers that held a respect for delving into why some given topic held weight in the world.

That’s really what Scholarly Gamers boils down to – we try to ask why, whenever possible, and report on those findings. If one of our enterprising Contributors pitches us an article about, say, the decline of ‘adoptable’ games such as Neopets, it’s important to us as site Admins that our writers have thoroughly researched both the cause(s) and effect(s) before moving forward. Having a solid and well-founded basis for every piece of content is what sets us apart, and instills a sense of pride in what we’re publishing each and every day. To the authors of Scholarly Gamers posts reading this now – I thank you for everything that you do to build us up.

In building out our content offering and expanding the scope that Scholarly Gamers began covering a year ago, every day we find ourselves a bigger fish than the night before, and our reach is growing steadily. We’ve built sturdy relationships with developers and publishers that have allowed us to try out games prior to release, and we’ve done so without compromising our integrity. Scholarly Gamers is still without a single paid-promotional piece of content on our site, and not for lack of offers. When individuals reach out to us and request that we write (favourably) about some given product in exchange for some compensation, we’ve obligated ourselves to decline the offer. Though monetizing is something every site owner has to contemplate, we’ve committed to writing about our own opinions and findings, and not those of others who would invest some of their marketing budget in us. We hope that these virtues of ours continue us down the path of securing your trust in what you find on the homepage.

In a prior celebratory article about Scholarly Gamers’ mounting successes after six months in operation, I threw a lot of raw data at you, the readers, which I believe may be best to avoid this time around – at least in long-form infographics and boastful claims. The reality is that Scholarly Gamers has surpassed every expectation I held for it at this time last year, and continues growing in a positive manner week-over-week. What I’d like to focus on are the successes we’ve attained under this banner, using them as points of pride to reflect on as ‘the little guys’ who had next to no experience in this twelve short months ago.

April 10, 2017 – Scholarly Gamers launched with a handful of writers and streamers

May 22, 2017 – Matt Ferguson penned his Midboss review, the first code sent to us by a publisher. Later, this review would also be our first referenced by a developer or publisher on the game’s Steam page

June 30, 2017 – We issued our first press badge for one of our Contributors to formally represent the site at GuardianCon 2017, followed closely by another press badge issued for our first European convention attendance at Insomnia X Resonate in Scotland only three weeks later

August 20, 2017 – Three Streamers promoted to Community Leaders due to massive expansion of our stream team

September 1, 2017 – We broke our first major news that GameStop would be offering a new tier in their PowerUp Rewards program. For months, Google ranked this article higher than GameStop’s product page itself

December 11, 2017 – Our review on Euro Truck Simulator 2‘s Italia DLC was shared by the developer, driving thousands of visitors to the site and accounting for one of our single busiest days

December 31, 2017 – We named Zelda: Breath of the Wild our first Game of the Year after voting amongst the staff and hundreds of games played between us

March 26, 2018 – Since publication, our Far Cry 5 review has been the #1 spoiler-free review found under many search terms.

My hand in Scholarly Gamers is heavily rooted in the cold, calculating, world of website development / maintenance and content coordination, but we still have a whole other side of our operation that delves heavily into the interpersonal blend of art and science that is video game streaming.

For a full directory of our three-dozen streamers, click here or visit our Twitch Community page to see what members of our team is playing (there’s probably somebody online right now – go take a look, I don’t mind!). Comprising some 65% of our staff, there’s no doubt that they bring a lot to the table and extend the Scholarly moniker beyond the confines of our website and into the community that we’ve been building all along.

Beyond promoting the name, our streamers have been making a solid name for themselves  and gainful progress towards Twitch Affiliate status. Six months ago I’d reported that *nearly* everybody who was on the road to Affiliate had made it to their goal; I’m honoured to proclaim that shortly after that point, everyone on staff that wanted to be an Affiliate had indeed been offered a position within the program. In fact, our streamers have been enjoying such progress on their individual channels that there are some that don’t wish to be Affiliate and have an invitation sitting in their inbox.

It’s that last note that bestows a sense of pride in me regarding the community that’s been so engaged in Twitch’s dynamic platform. We (Royal We, as I am no streamer) have been bringing viewers in droves; in the last 30 days, Scholarly Gamers’ streamers have broadcast to an estimated 20,000+ viewers, where in the first six months we’d accumulated 70,000 views in total. This works out to some 70% growth in monthly streaming figures, and is a solid indicator that things will continue on the rise as the community becomes more and more established.

The most common advice I hear with respect to small business management (which this sort of is) and hobbyist ventures (which this certainly is) is to set goals and make sure that everything you do takes you at least one step closer to attaining them. Many often retort that this is often easier said than done, because so many little things pop up left, right, and centre that serve as distractors; bumps in the road that need an instant reaction but don’t necessarily guide you further into your travels.

I beg to differ from the dissenters; manoeuvring around (and past) all of the little bumps and potholes does get you further down the road, because you didn’t let the obstacles stop you in your tracks or steal your momentum. Scholarly Gamers’ management is committed to taking this community and platform as far as we can, and we thank you, our returning visitors and community members from sharing all that we work so tirelessly to provide.