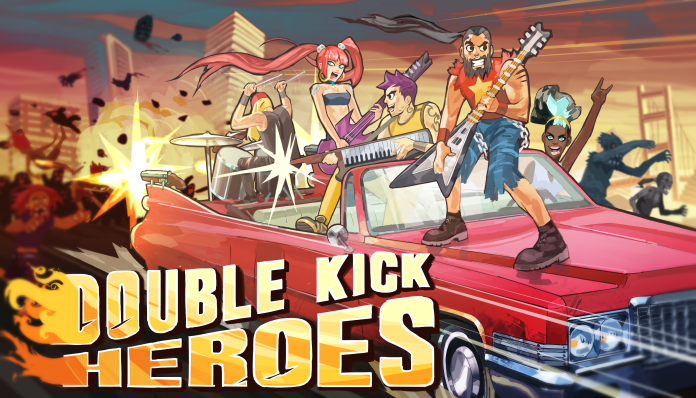 Double Kick Heroes is a combination I could have never imagined; a game that combines the look of 90s LucasArts adventure games with the world of Robert Kirkman’s Walking Dead and the gameplay of Harmonix’s Rock Band.

And at this early stage, it feels promising.

In the game releasing last week (April 11th) on Steam Early Access, you take on the role of the Double Kick Heroes, a five-piece metal band stranded in a zombie apocalypse. The genre fusion exemplified by the game is refreshing. Randie, Derek, James, Lincoln and Snake guide you through each of the game’s 15 levels in Early Access (the final game promises 30 levels) and each level has its own track composed by French music composer Elmobo.

As a man who loaded the Gitaroo Man and Katamari Damacy soundtracks onto his iPod in the PS2 era, I was blown away by the music. The tracks available in the game right now are stellar. Even as a non-metal fan, I found myself bobbing along as I shredded through waves of zombies. 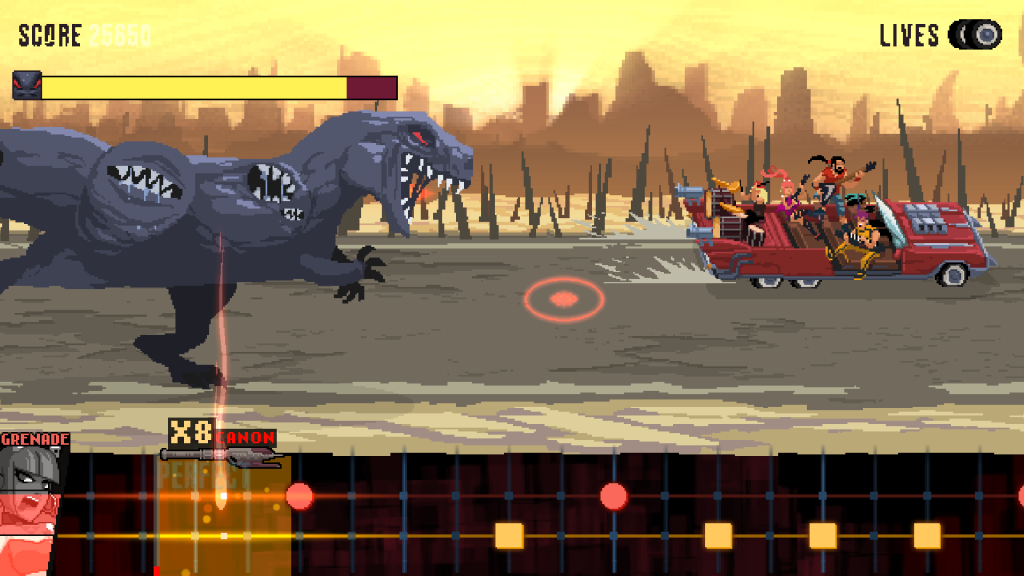 The game’s main game screen is separated into two sections: the track and the road.  Depending on the difficulty of the game and the particular stage, you may need to take control of two main guns (mapped to the left and right arrow keys by default), grenades (the Control Key by default) and a sniper (Shift by default). However, unlike basement shred-fests with plastic instruments a la Guitar Hero, you also have to pay attention to the enemies charging at your car on the road.

If you play well, you build a multiplier that improves the gun you use. If you begin missing a string of notes, enemies may approach your vehicle. Get hit by an enemy three times and you’ll be forced to start over. In some levels, you also gain vertical movement of your vehicle, adding to the madness on screen. It’s sometimes hard to focus on both parts of the screen at once, but the side-scrolling gun battles on wheels against zombies, humans and other creatures adds a whole other level to the typical dynamic of a music game.

The game is separated into two main game modes: Arcade and Story. If you just want to play, you can jump into each song and compete for high scores. But the game’s single-player bread and butter is the Story Mode. In a format popularized by Guitar Hero, you have five difficulty levels to choose from before you enter into the apocalypse. You move the story forward by jumping into your Gundillac (gun-filled Cadillac) and choosing stages/rest stops using a Super Mario World style over-world map. Between stages, you’ll enter into a casino, garage and prison to meet other survivors while you figure out what the heck is going on. Apart from feeling like the best parts of Flash-y brilliance from the Golden Age of Newgrounds in the 2000s, the game pays homages to several other major game franchises, musicians and actors (see if you can find all of the easter eggs). 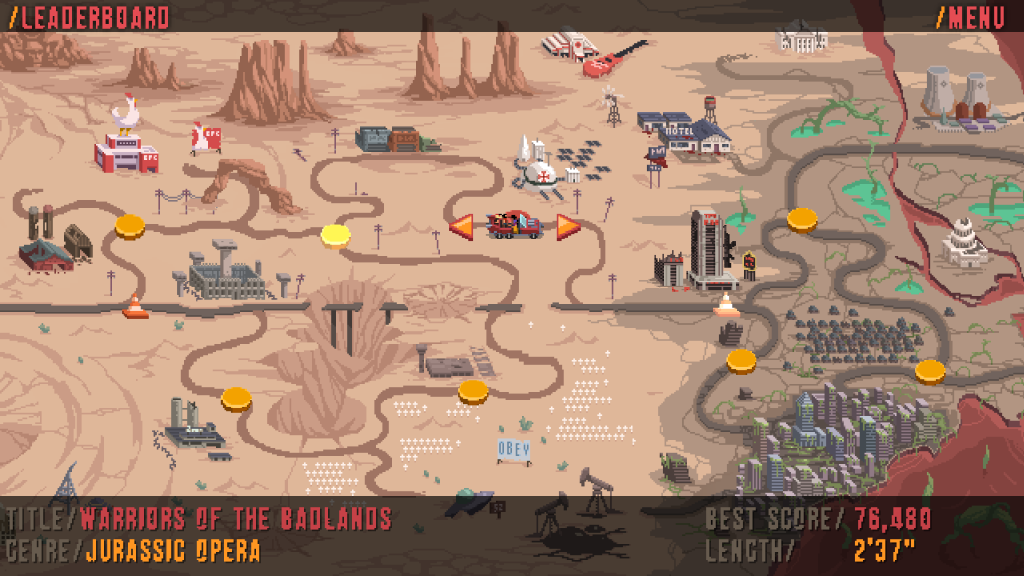 The game also has a full level editor. Drop in your favorite legally purchased MP3 and you can create your own level for yourself (and others) to play through. It was fairly straightforward to create your own stage – after adding City and Colour’s Sam Malone to the game, I began to edit my Double Kick masterpiece. 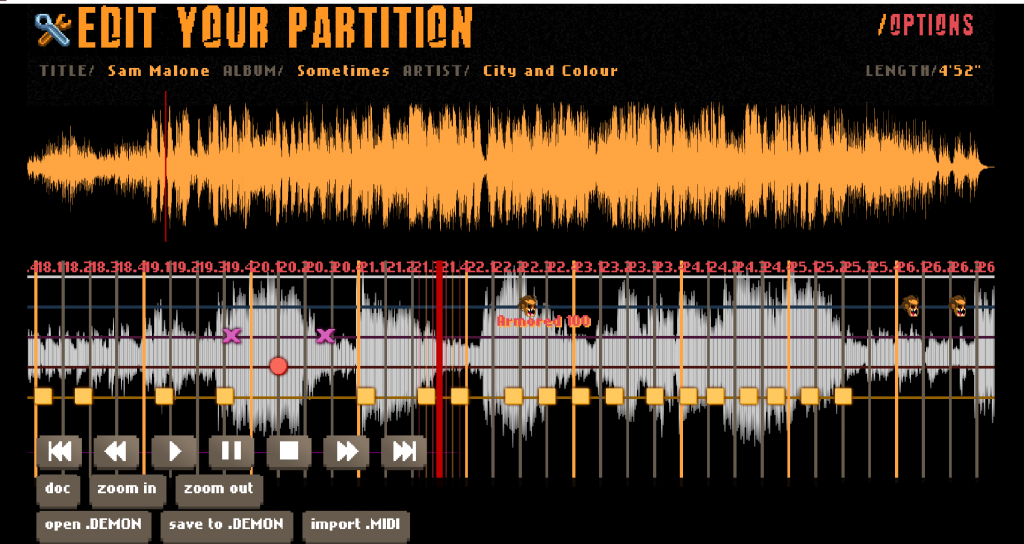 The game is pretty well put together so far in its Early Access form. However, I’m a little concerned about developer Headbang Club nailing the tone in the game. In one of the game’s levels, your band is confronted with a cult. With no other mention of cultism throughout the rest of the game, you are suddenly confronted with a huge group of KKK enemies to kill. Beyond a single tweet from the developer, this strange non-sequitur seems completely out of place, unneeded and unwanted. Drawing inspiration from Tarantino and Rodriguez by nature will make the material pulpy, but I hope that the game nails a fun tone without resorting to cheap attention grabbing tactics.

Which is how we ended up with this scene:

Followed not long after by:

As a big fan of offbeat rhythm games like Gitaroo Man, Parappa the Rapper and Elite Beat Agents, rockin’ game soundtracks and great world-building in zombie apocalypses (like the underrated and not-quite-game Zombies, Run! from Six to Start & Naomi Alderman), I am curious for the full release of Double Kick Heroes. I just hope they stick the tonal landing.

A digital preview copy of this game was provided by the game’s developer.