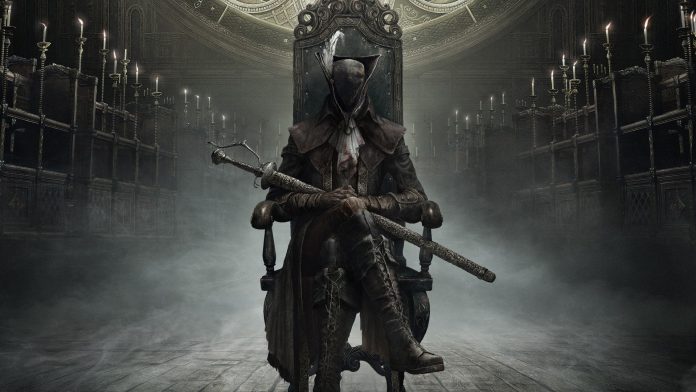 Enough has been said of Bloodborne’s inspiration from the works of H.P. Lovecraft, however not nearly enough discussion is given to what Bloodborne takes from the gothic literary tradition. In developing his unique brand of existential, cosmic horror, Howard Phillips Lovecraft sought to improve upon the traditional gothic story which he viewed as “tedious, artificial and melodramatic…impaired by a brisk and prosaic style whose urbane sprightliness nowhere permits the creation of a truly weird atmosphere”1. Lovecraft detested the cliché-ridden traditional gothic ghost story and has forgone the expectations of the genre to develop a brand of horror personified by a ” pervasive cosmic evil that lurks just behind visible reality and always threatens to burst forth into the prosaic, mundane world”2. Bloodborne too seeks to assault the nerves of even the most hardened player on a psychological level. As much as Bloodborne draws from Lovecraft, its gothic influences go beyond merely its aesthetic and lays dormant in a sublimely intimate manner. 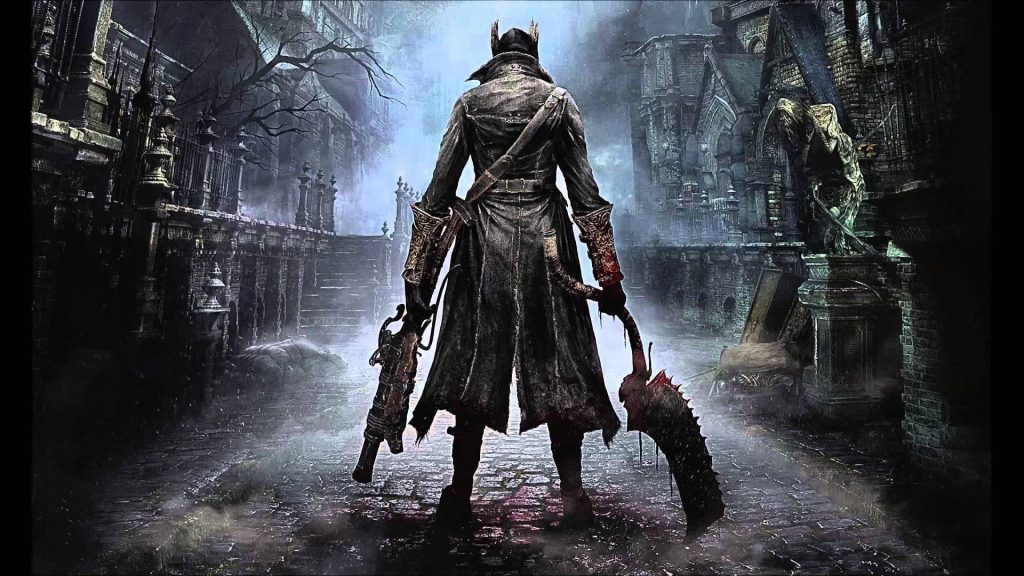 Blood, is a common symbol in gothic literature classically used as “a metaphor for vampirism, carrying within it both monstrosity and traces of its opposite, humanity”3. Bloodborne evolves this symbolic understanding to encompass the maternal/menstrual blood associated with birth. As said best by Master Willem, “We are born of the blood, made men by the blood, undone by the blood”. Which is to say that the blood through which we were born carries an immense power that can deliver a new horror to our world. Harkening back to Mary Shelley’s Frankenstein, Bloodborne too reminds us of the sublime nature of childbirth, how it can both awe with its beauty and terrify with its implications. Exploring the sublime nature of childbirth is just one of many ways Bloodborne evolves from the classic gothic ghost stories and contributes to the fertile discourse surrounding the female gothic.

Ellen Moers first used the term — female gothic — in 1976 and expanded on it to broadly encompass “a coded expression of women’s fears of entrapment within the domestic and within the female body, most terrifyingly experienced in childbirth”4. After all, What could be more horrific than the cage of Victorian domesticity which kept women sexually repressed, submissive and nothing more than a procreative tool5. The deep, occult mythos of Bloodborne, is bathed in blood and forgoes a traditional gothic ghost story in favor of exploring the psychological and corporeal horror of childbirth. Through its exploration of blood, procreation and trauma, Bloodborne provides some insight into the psychological burden taken on from childbirth while innovating on the classical archetype of a gothic story.

“Seek the old blood. But beware the frailty of men. Their wills are weak, minds young”

The cobblestone streets of Yharnum are lined with the blood of both man and beast, but there is another type of blood of prime interest; the blood that we are born in. Bloodborne is rife with references to the sanguine, sublime nature of birth. Blood ministration, the process by which Yharmanites cure disease and ailment by ingesting blood of a Great One, is not too dissimilar from the sharing of blood between mother and child. Blood ministration not only cured ailments, but also provided superior agility and strength to those who partook. Yharmanites became dependent on the blood, needing it to survive just as a baby in the womb also requires its mothers’ blood.

In Bloodborne, not even the player is spared from a bloody birth; they are brought into the game via a blood transfusion signifying their parturition into Yharnum’s streets. Through Bloodborne’s repeated references to menses and to the moon, a body used to track passage of months, we can start to see that this powerful blood is meant to represent menstrual blood and the metaphor is extended to include maternal blood in general. For example, the progress of the game is based around phases of the moon, climaxing at the unveiling of the blood moon. The blood-stained moon not only represents the monthly rhythm of menstruation but also, according to a note found in Byrgenwerth, a period in which the cosmic Great Ones descend to bless a womb with child.

The blood which has imbued us with life also holds the power to enhance us as well as the power to create unspeakable horrors. Following the discovery of the healing power of the Old Blood, there was debate among Byrgenwerth scholars over how the blood should be utilized. Concerns over whether the blood “Makes us more than human” reveals the still unknown nature of the power of blood. Keeping in mind the blood of the Great Ones flows through the mothers carrying their children, we see that the true power in Yharnum lies not with the healing church, or even the hunters of the dream but through the givers of life whom provide the means to transcend to a higher power. It is through the dual symbolism of blood that Bloodborne expertly manages to juxtapose the drive to create life with the drive to destroy it.

In examining the complex dichotomy between birth and death, one can look no further than the queen of gothic literature herself, Mary Shelley. In her seminal work Frankenstein, Victor aims to “bestow animation upon lifeless matter”6 and does so by raiding graves and morgues to gain enough necrotic material to create life from death. Like her most famous literary creation, Mary Shelley’s experiences with childbirth are also shrouded by spectres of death. Shelley’s journal entry following the loss of her first unborn child lays bare her postpartum trauma and a yearning for power over death. “Dream that my little baby came to life again… that it had been cold, and that we rubbed it before the fire, and it lived”7. The deep psychological wounds compounded during a later pregnancy unleashed a torrent of anxieties and fears of a mother awaiting her child. ”What if my child is born deformed… Could I still love it, or would I wish it had never been born? What will happen if I cannot love it?”8. This deep-rooted maternal fear is explored and exploited by Bloodborne, producing a truly unnerving nightmare.

A Nightmare is Born

“Every Great One loses its child, and then yearns for a surrogate, and Oedon, the formless Great One, is no different. To think, it was corrupted blood that began this eldritch liaison.”

The people of Yharnum have gone beyond merely communicating with the Great Ones. “When the red moon hangs low, the line between man and beast is blurred. And when the Great Ones descend, a womb will be blessed with child”9. The presence of the red moon carries a hefty weight as it not only alludes to the Moon Presence, the true final boss who ‘s defeat truly ends the nightmare of Bloodborne, but also to the menstrual and pregnancy cycles afflicting certain women. Women who have communed with the Great Ones intimately and borne them children. These defiled offspring are the source of the nightmare and must be silenced ”lest the night carry on forever”. The nightmare plaguing Yharnum was born, not of an eternal Great One, but of a woman. Bloodborne is quick to remind us of the ”revulsion against newborn life, and the drama of guilt, dread, and flight surrounding birth and its consequences”10.

Said consequences of a traumatic birth to an unholy creature is best exemplified by Arianna after she gives birth to a creature of her own. Despaired by the bulbous, tentacled monstrosity which sprung from her womb, Arianna can do nothing but hide her head in her hands and lament “it can’t be…this is a nightmare”. Eighteenth-century infant mortality rates occurred in numbers as high as 300 per 1,000 births11; beating those odds only for your child to be an abomination of flesh and blood would bring any mother to the brink of madness. Bloodborne allows this subconscious maternal madness to breed and fester endlessly until manifesting itself into a literal ”Nightmare of Mensis”.

The boundless horrors of a typical Lovecraftian tale stem from our “oldest and strongest kind of fear” that of the unknown12. Nothing could be more cryptic, more terrifying, than the possibility of giving birth to a monster. Fictional or real, every monster, whether it be Grendel or Jeffrey Dahmer, had to have been born to a mother. Any possibility to bring a new life into this world is also a possibility to introduce a new evil to the world. That is the true horror that Bloodborne draws from as these subconscious familial fears are materialized in Bloodborne through the suckling source of the Yharnum‘s nightmare. Only upon silencing the cries of infantile Great One Mergo, is the player met with the message ”Nightmare Slain” instead of the usual post-boss battle message of ”Prey Slaughtered. Implying that the true source of horror in Yharnum stemmed from this neonatal nightmare. 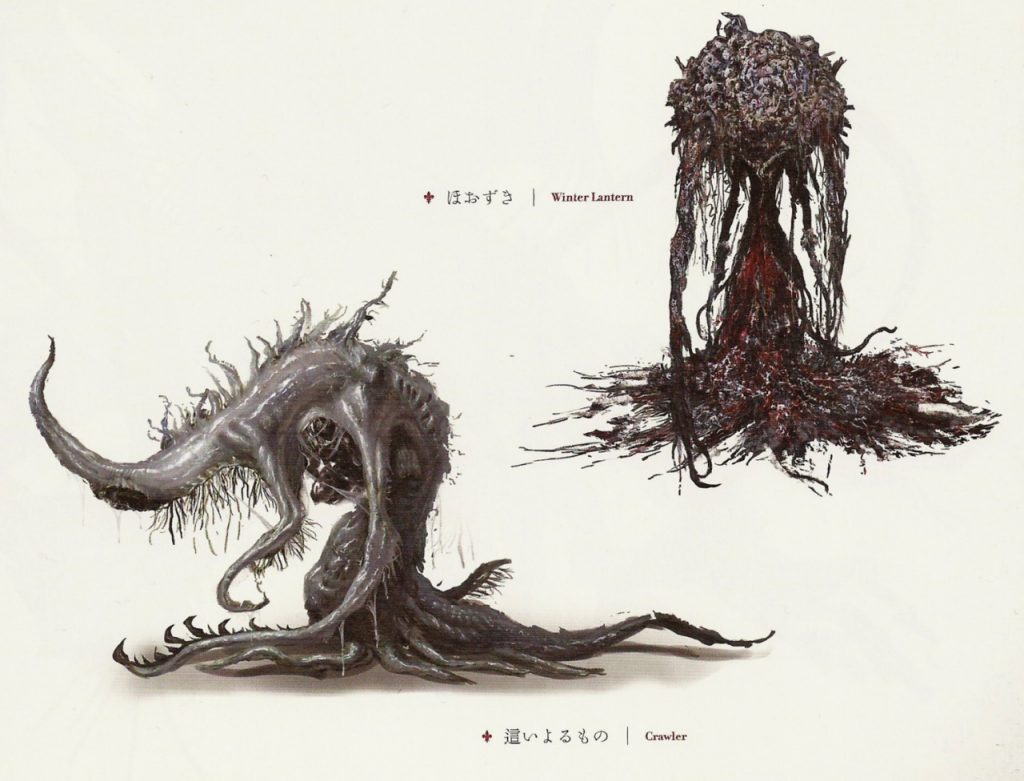 The true cosmic horror found in Bloodborne is less about what unknown horrors can be found in the cosmos, but what unknown horrors can be birthed from your own body. The inspired creature design embraces body horror and viscerally metamorphosizes the human form into grotesque monstrosities. The design of many of the beast-like enemies invokes the “inner clash…the urge to transform into a beast”13; Bloodborne takes our fear of the unknown and turns it inward on our own body to devastating effect.

Lest the Night Carry On Forever

“Fear the old blood…By the gods fear it”

Bloodborne is undoubtedly an excellent game internalizing what made Lovecraft’s writing so memorable, but not for the reason you might be thinking. Yes, its insight mechanic is an interesting way for the player to subtly peel back the veil on their reality and the player needs to be just as wary of psychological damage as they are with physical damage taken. However, what separates Bloodborne from the litter of Lovecraftian media is how it reveals the deeper fears and cosmic uncertainties in our own banal lives.

As much as we have a natural desire to demystify our universe, we carry an innate drive to also demystify the miracle of childbirth here on Earth. New parents consume books on what to expect, and how to raise their children in hopes that their little angels will grow up to change the world.

Bloodborne is a sobering reminder, that sometimes our children change the world for the worse. 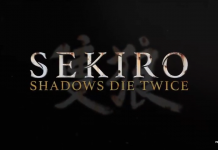