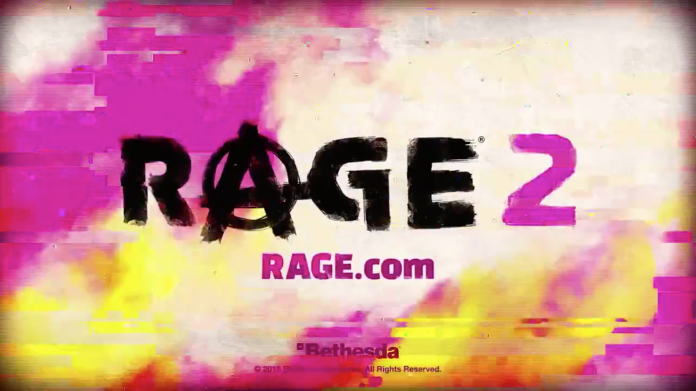 Today, Bethesda’s Twitter account released the recently-yet-highly-anticipated trailer for RAGE 2, ahead of its June 10th E3 press conference. After a leak on Walmart’s website revealed many large developers’ presumed soon-to-be-announced titles (including RAGE 2, a rumored sequel to 2011’s RAGE by id Software), publisher Bethesda appears to now be leaning into the punch and leveraging the viral nature of social media.

Since the reports of the Walmart leak began circulating more widely on May 11th, Bethesda has released a series of images that appeared to have been teasing something slated for “5.14”, or May 14th. Each of these images showed some graffiti and/or grungy post-apocalyptic survivors meshed into real-world (‘present day’) imagery, with scrawls embedded about counting down the days until 5.14. Today, the full announcement trailer released, as embedded below.

The first RAGE game was fully released in October of 2011 on Xbox 360, PS3, and PC, nearly a full year after arriving on iOS first as a guided ‘gallery’ shooting experience that demonstrated exceedingly impressive visual quality on mobile devices. From the press cycles leading up to (and coming after) RAGE‘s release, id Software founder John Carmack would talk about the wealth of visual fidelity present in the game as powered by the id Tech 5 engine used in its development, and has been widely quoted advertising that the ‘uncompressed version of the game is over a terabyte in size’.

If the vision for RAGE 2 holds true now as it did between 2007 and 2011 (from the game’s announcement as a tech demo to its full console and PC release), fans of the franchise can likely expect to hear more of the technical details regarding the inner workings of the game, its engine, and how extensive the graphical assets library has grown during the development of this sequel. A curious departure from the original, however, is the omnipresent bright pink and yellow; a stark departure from the original game’s dusty and earthtone palette.

Bethesda has also promised a gameplay trailer for release tomorrow (May 15 2018).