GIANTS Software has released another developer blog , this time providing details on the revamped mission system for Farming Simulator 19. The ability to do work for other farmers has been present in the series for quite some time, but it has continued to evolve. In Farming Simulator 15, players used a “job board” placed at several locations around the map to accept missions such as mowing grass or transporting items from one place to another. Farming Simulator 17 took a different direction, with players completing work for neighbouring farmers who owned the other fields around the map, gaining loyalty (and reducing the price to buy those fields) along the way. The activities in these missions included fieldwork at every stage of crop growth, depending on how far along the crop was on the field the player chose to do a mission on. Players could be asked to plough, cultivate, seed, spray, or harvest. According to the developer that GIANTS has published, it appears as though the systems from the past two versions of Farming Simulator have been combined and enhanced to create the system for Farming Simulator 19.

Rather than forcing the player to travel to a certain field – or find a job board – somewhere on the map, Farming Simulator 19 introduces a contracts menu, which will list all currently available jobs. Job types will include those seen in Farming Simulator 17, with the added inclusion of transport missions (returning from Farming Simulator 15) and a brand new mission type: hay and silage baling. These missions will require the player to perform all parts of the process, from cutting the grass to baling it to delivering it to a designated spot on the map. The screenshot provided also shows that the missions may entail more work than before – in this case, it indicates that after harvesting the crop, the player is also required to deliver the product to a certain location. This is a tweak to the system seen in Farming Simulator 17, where the work was done once the harvesting was completed. 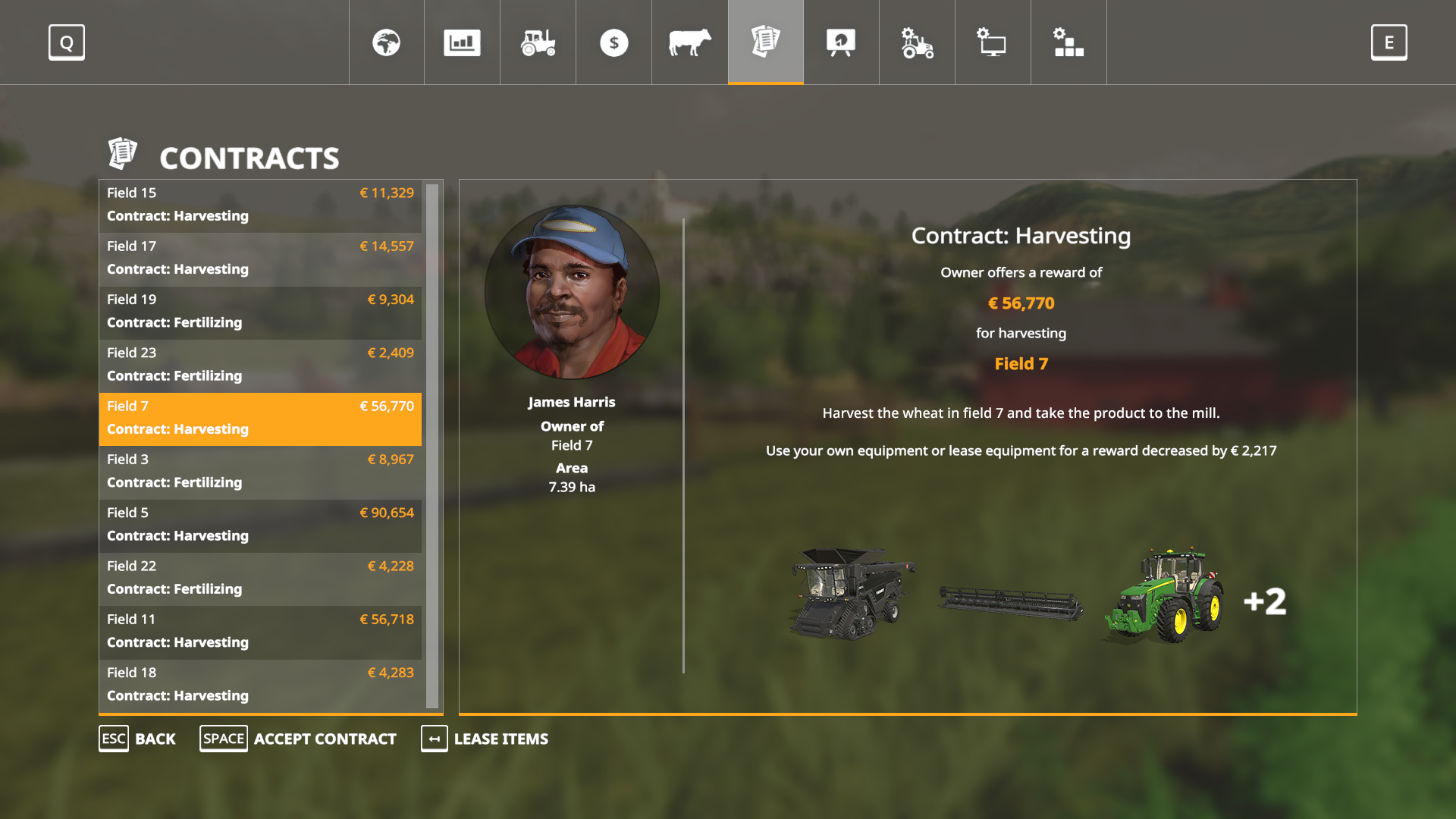 Another change from Farming Simulator 17‘s system is related to the use of equipment – previously players were required to use the equipment given to them for each mission, but Farming Simulator 19 will allow players to choose between leasing the necessary equipment or using their own. Using your own equipment will allow you to keep more of the payment in your pocket, since you won’t be paying for the leasing of the necessary equipment. This will also allow players to develop a “specialty” if they so choose, as (for example) they may decide to invest in large harvesting equipment and act as a harvest contractor for various farmers around the map.

GIANTS has also removed the time limits on missions, as well as added the ability to save while a mission is in progress, so you can rest assured that your work won’t go unrewarded if you need to leave halfway through a job. Players will also be able to cancel missions they have accepted, adding even greater freedom to the system.

The blog also confirmed that missions will be available in multiplayer, adding a whole new dynamic to the already-changing mode. Overall, it appears as though the game’s multiplayer mode will benefit from a number of significant changes. 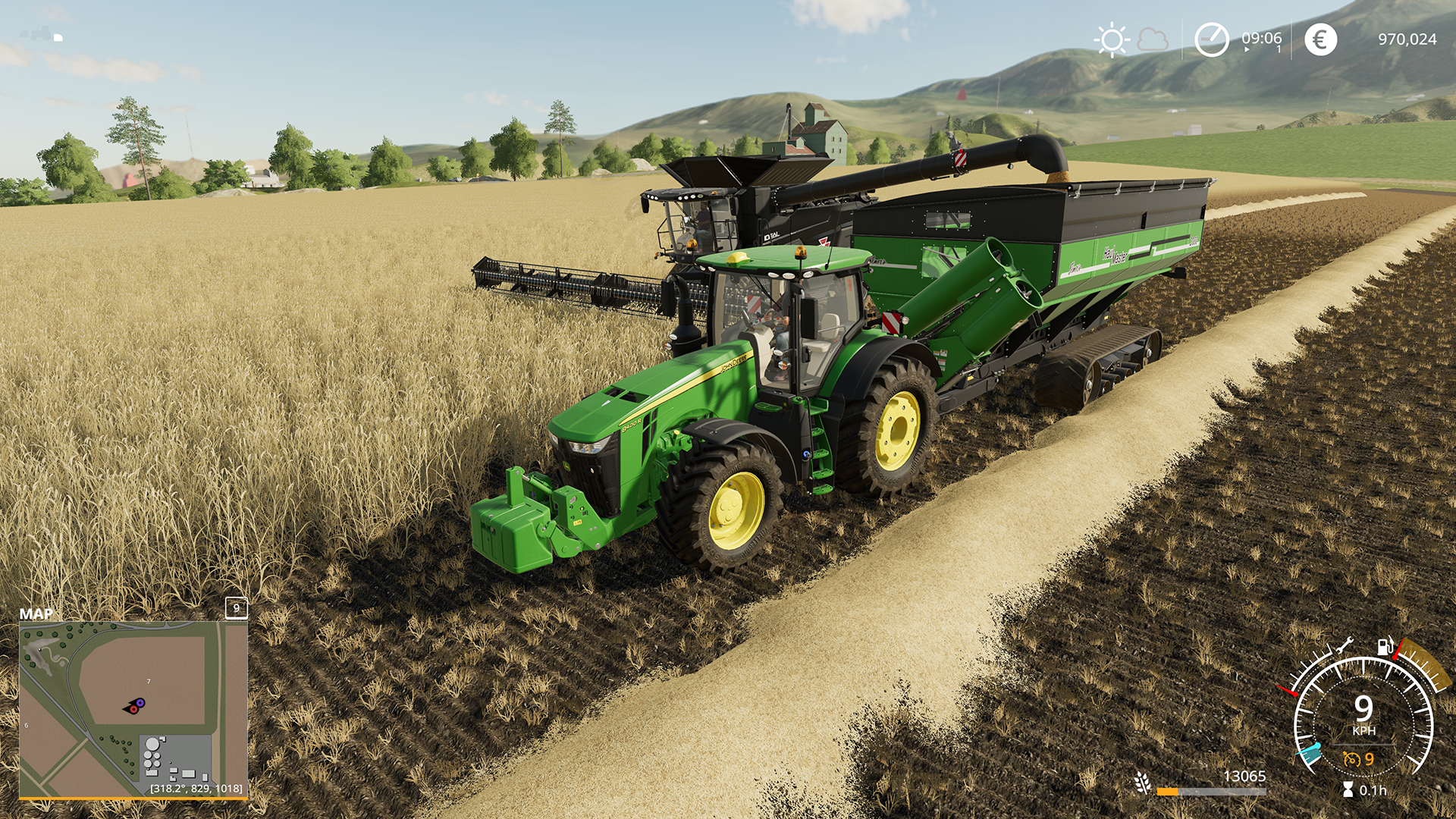 Perhaps most exciting to me about the new developer blog was the appearance of the first in-game screenshot showing the game’s redesigned heads-up display (HUD). The HUD has been streamlined and made more transparent, giving a sense of the player having more visible area on the screen and overall complementing the graphical upgrades to the game very well (who doesn’t want to see more when the game looks this good?). The HUD shows all of the information one would expect (speed, cruise control setting, fuel level, fill level of the attached tool (or in the case of the screenshot, tipper) as well as a new bar with a wrench beside it, which likely indicates the way in which players will be able to see the level of wear and tear on their equipment (previously announced during FarmCon).

The screenshot looks fantastic, and the overhaul of GIANTS’ graphics engine is readily apparent. Everything seems more vibrant and realistic than in Farming Simulator 17, with the lighting and shadows really standing out. The level of detail that is visible is also immaculate, right down to the rivets on the recently confirmed Elmers HaulMaster chaser bin (which will be available in multiple capacities and colours in-game). 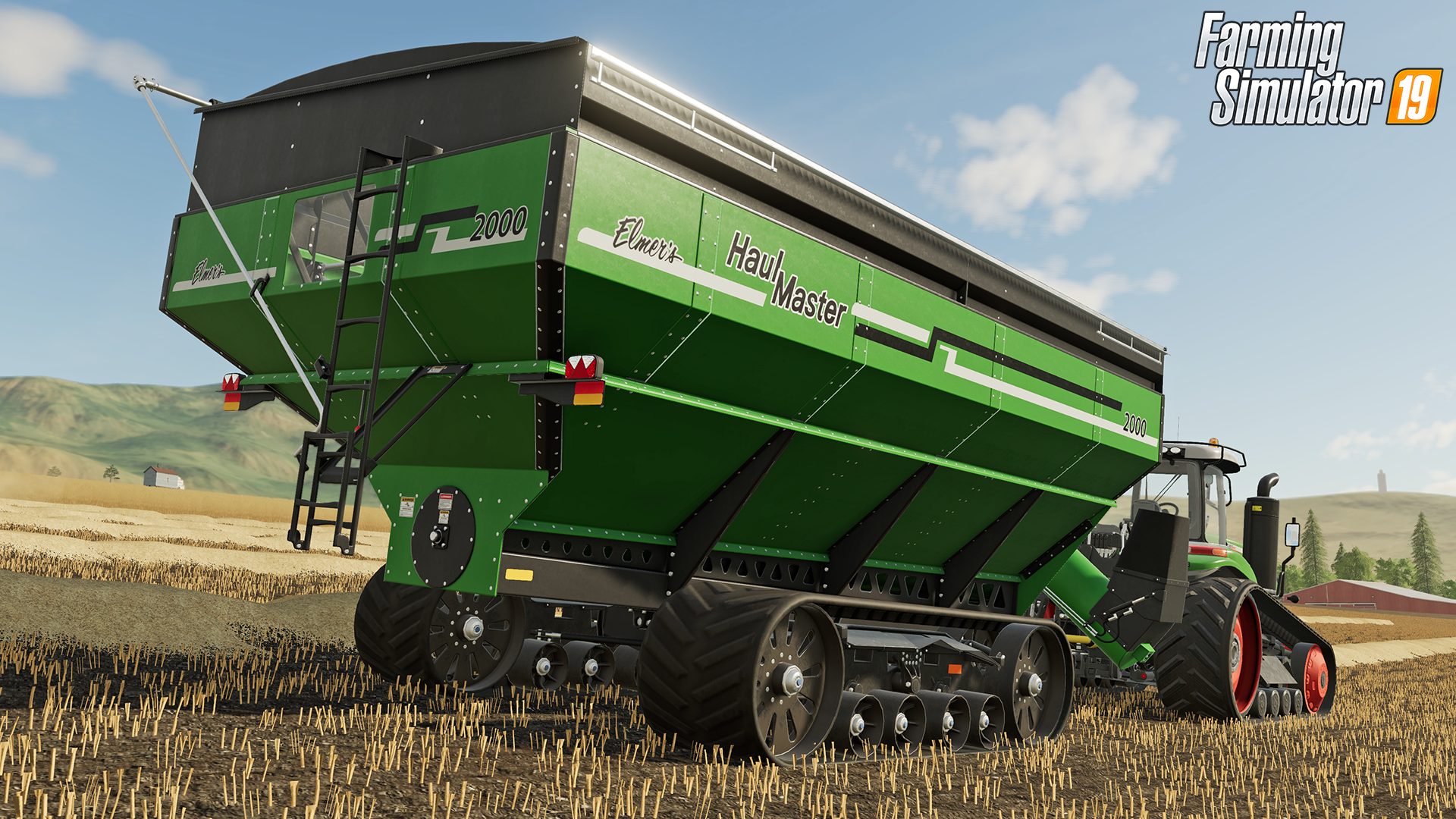 This developer blog has given players even more to be excited about when it comes to Farming Simulator 19. GIANTS’ Community Manager Lars Malcharek has indicated that this will be the last blog to be published before GamesCom (which takes place August 21-25, 2018 in Cologne, Germany). Despite having released two blogs in the span of just over a week, Malcharek says  players shouldn’t expect a developer blog every week, as the developers need time to, well, work on the game’s development.