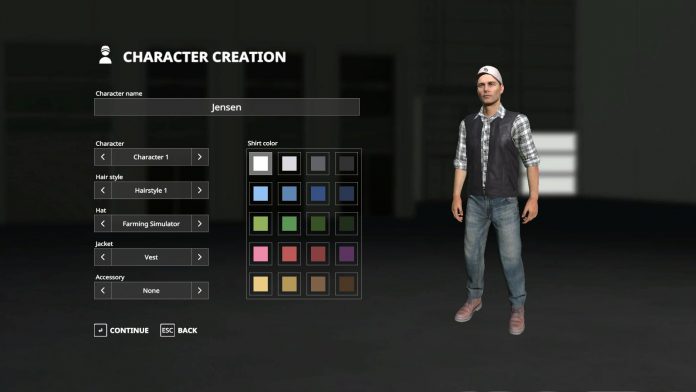 GIANTS Software has released another developer blog providing details on an aspect of Farming Simulator 19, this time choosing to focus on the enhanced character customization options that will be available. Previous blogs have given us a deep look at the upcoming game’s improved farm creation mechanisms, mission system, and new crops and weed system. While this blog may not excite the hardcore “simmers” among us, it still provides some insight into an improved feature in the game that will allow players to show off their own personal flair.

The blog outlines a number of things that have been changed from the character customization in Farming Simulator 17. Fans of the series will recall that 17 introduced a female playable character for the first time, and allowed players to choose the colour of shirt that their farmer was wearing. FS19 takes this to the next level, offering a choice between 4 male and 4 female character models, along with a number of hairstyles, clothing colours, and the option of wearing brand-specific hats to demonstrate your dedication to a particular line of equipment. If you’d like, you can also outfit your character with sunglasses. One additional thing players can do is add a jacket to their character, but only for the male character models, which is a somewhat odd choice for GIANTS to have made. The male and female models don’t appear as though they differ significantly enough for one to offer clothing that the other can’t use, however this is what was indicated in the blog.

GIANTS provided some screenshots that give a taste of the options available in the character editor, and it’s evident that there are many more choices than there were in Farming Simulator 17:

Many people complain that character customization in Farming Simulator games doesn’t matter, since the player’s character model is typically obscured by the cab of a tractor – not to mention that when on foot, you control your character from a for perspective. However, Farming Simulator 19 will offer even more opportunities for players to see their character in action, since horse riding will offer a third-person view of the character model riding the horse. And of course it goes without saying that other players will see your model if you choose to join any multiplayer games, and who doesn’t want to show off a little bit of their personal style and taste in machinery with their outfit when playing with their friends?

Farming Simulator 19 arrives on PC, Mac, PlayStation 4, and Xbox One on November 20. Check back for more details on the game leading up to its release!