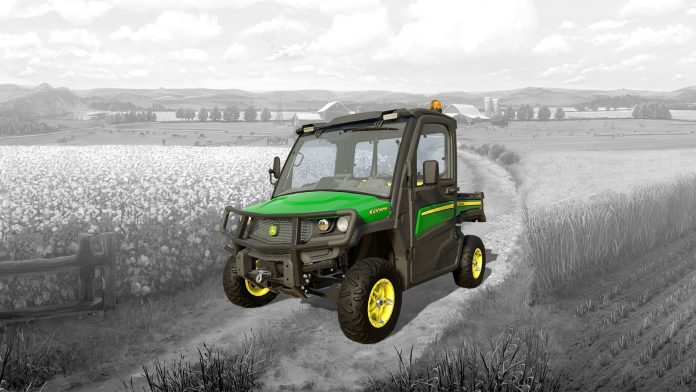 Farming Simulator 19 releases on November 20, 2018 for PC, Mac, Playstation 4 and Xbox One. You may already know which platform you’re planning to buy the game for, but there are multiple versions available on each platform. Which do you choose? What types of pre-order bonuses are out there? Here’s a handy list to help you figure out how to get the most bang for your buck.

The various editions and bonuses are listed by platform, then sorted into either physical or digital versions. Most versions of the game, if pre-ordered, will come with the Mahindra Retriever utility vehicle downloadable content (DLC), however not all versions will, so check carefully when purchasing if you want that extra vehicle! Please also note that the game may be available for pre-order or purchase at other retailers and this is not an exhaustive list – this is simply a list of several common retailers who are offering pre-order bonuses. 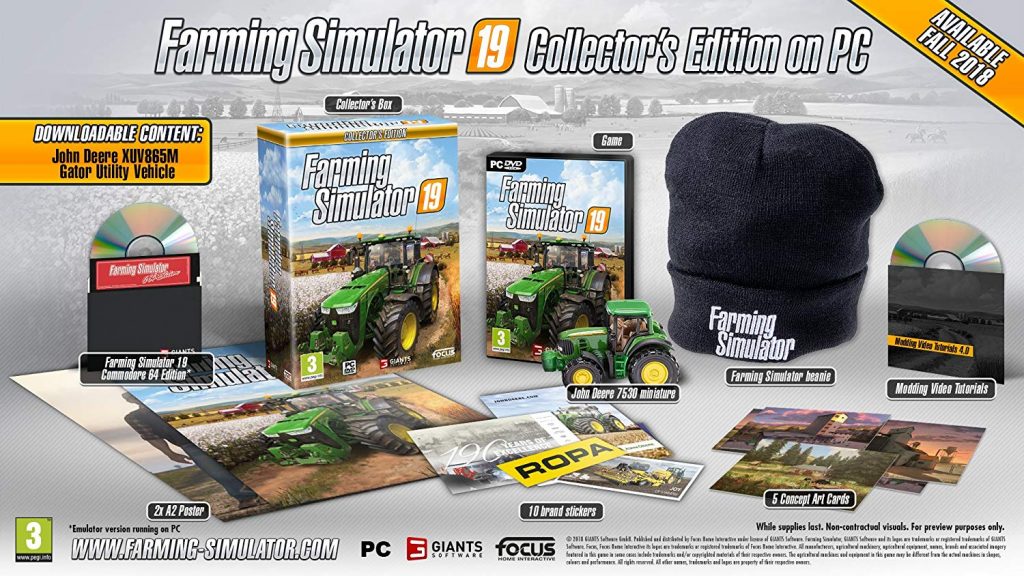 This edition is only available in Europe through Amazon. A representative from Maximum Games – the North American distributor for physical editions of Farming Simulator 19 – indicated that they did not receive the rights to distribute the PC CE. Focus Home Interactive, the game’s publisher (and in charge of distribution in most parts of the world) was unable to be reached for comment. This is likely to be a source of disappointment for North American PC players who had hoped for the CE and/or access to the Gator DLC. 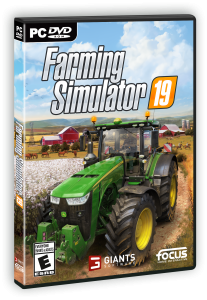 The standard physical edition of Farming Simulator 19 is available for PC either physically or digitally, and only available for Mac digitally. Here are the different places to pre-order the game, and which pre-order bonus you’ll get with it (if any).

Correction: This article previously stated that there was no pre-order bonus if bought through the Farming Simulator website – GIANTS has clarified that though it isn’t communicated on the website, pre-orders through their website also come with the Mahindra Retriever DLC. 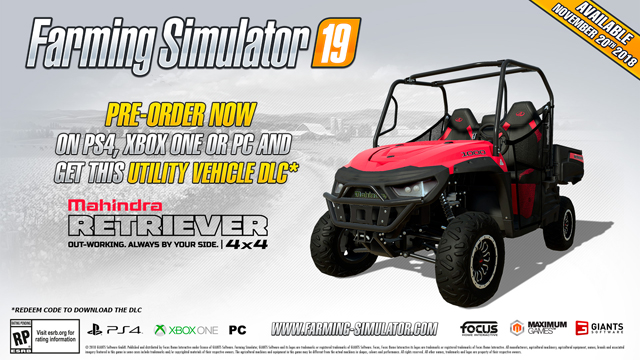 There are several different retailers for the standard edition of Farming Simulator 19 for consoles. Depending on which one you choose to buy from, there are a couple different pre-order bonuses. Please note that digital pre-orders on PlayStation Network for North American users will not be available until October 23, 2018. 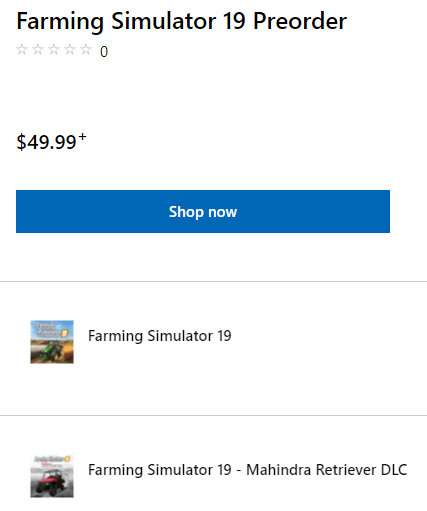 If you want access to future DLC packs, then there are two options available. For those who purchase a physical copy of Farming Simulator 19 on console, they may purchase the Season Pass, which historically has provided access to all DLC produced by GIANTS for the game in question. For Farming Simulator 15 and 17, this included several DLC packs containing new equipment as well as a “Platinum Edition”, a large DLC pack that added more equipment plus a new map. The Season Pass can also be purchased later at any time through each console’s respective digital store, and historically it has provided access to all DLC packs, even if they were released prior to that person purchasing the Season Pass (and access is provided to all future DLC packs as well). 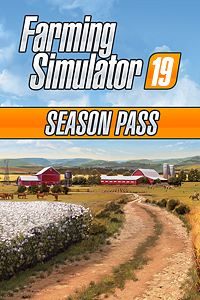 For those looking to purchase the digital version of Farming Simulator 19 on console, they have the option to pre-order the Premium Edition instead of the Standard Edition. The Premium Edition on Xbox One includes:

The PlayStation Store listing does not mention the John Deere Gator DLC, so it’s unclear if pre-ordering the digital premium edition on PS4 will get you that vehicle. If PS4 players are going to get the Gator, it will likely only be through pre-ordering the premium edition, but it’s strange that it isn’t shown. However, the PS4 digital version also comes with the New Holland T6 Blue Power tractor DLC and a Farming Simulator 19 theme for your PS4. 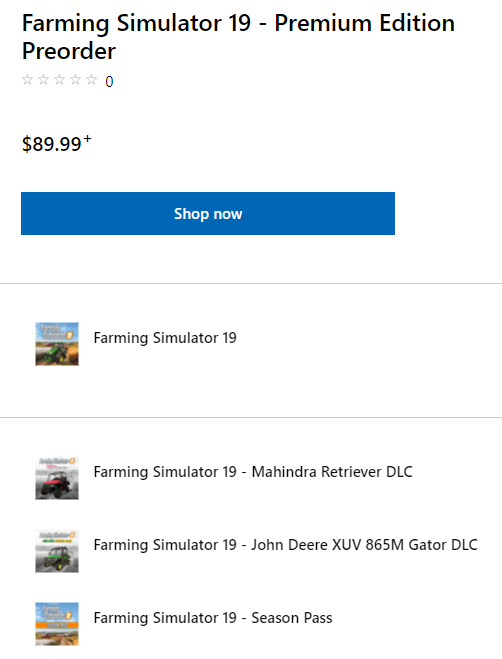 It’s worth noting that at this point, it appears as though the only way for console players to get access to the John Deere Gator DLC is by purchasing the Premium Edition on their digital store. Physical versions and the standard edition do not appear to come with this DLC. As mentioned, while the PlayStation Store doesn’t mention the John Deere Gator, if PS4 players are going to get it, the premium edition will likely be the only way.

I hope this list comes in handy for those looking to pre-order Farming Simulator 19 and unsure of what’s out there. Stay tuned to Scholarly Gamers for more news on the game as we lead up to its release!