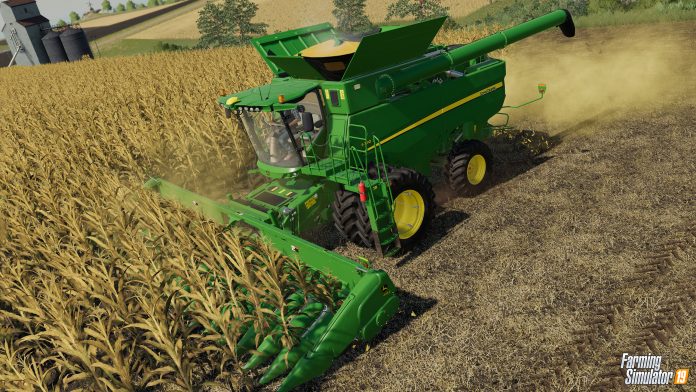 Farming Simulator 19‘s Fact Sheet Friday is back in a big way this week, with developer GIANTS Software releasing 4 new fact sheets (across 5 separate images) – and showing off some monster equipment to boot! In case you’ve missed any of the previous fact sheets, you can find them all here:

The hardcore fans who were paying attention this week likely knew what was coming. GIANTS released a video showing off the Fendt 1000 Series earlier this week, as well as another video that showed a John Deere spokesperson teasing there would be more green and yellow than what we’d seen so far. I wasn’t sure what we’d get – GIANTS had previously clearly stated that there wouldn’t be any additional John Deere combine harvesters in Farming Simulator 19‘s base game, so would it be a seeder? A forage harvester? In fact, GIANTS themselves accidentally leaked the big news in a posting on Steam a day prior to the release of these fact sheets. Today, we get to see it in all its glory. But first, a piece of John Deere equipment we already knew about – as much as I want to, I can’t bring myself to take them out of order! 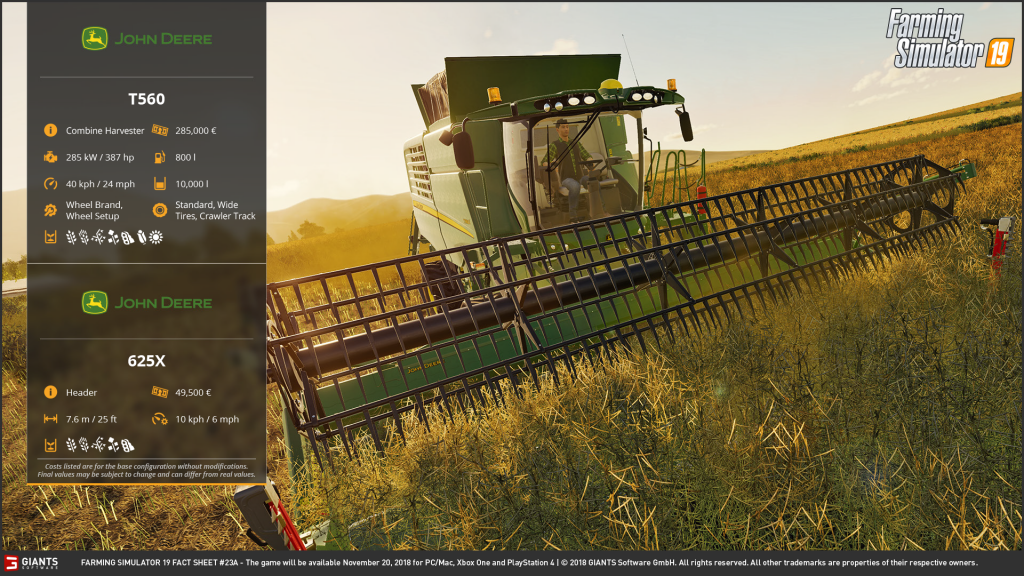 The T560 has been shown many times already. It was featured heavily in the Gamescom gameplay trailer and the demo that was captured by many popular YouTubers, as well as in numerous trailers since. It looks to be an excellent mid-range combine, with a moderate capacity of 10,000 litres – happily between the New Holland TX 32’s 5,600 litre capacity and the AGCO Ideal’s 17,100 litre tank. It’s fantastic to see the option for both wide tires and a crawler track on a smaller combine like this, and I’m hopeful that we’ll see a variety of wheel options on other combines as well (as appropriate considering their real-life counterparts, of course).

The John Deere 625X header runs at 7.6 metres (25 feet) wide, again clearly situating this combine as a middle-of-the-pack option between the TX 32’s 13 foot header and the 40 to 45 foot headers we typically see on the largest combines. And if it’s larger combines you’re looking for… 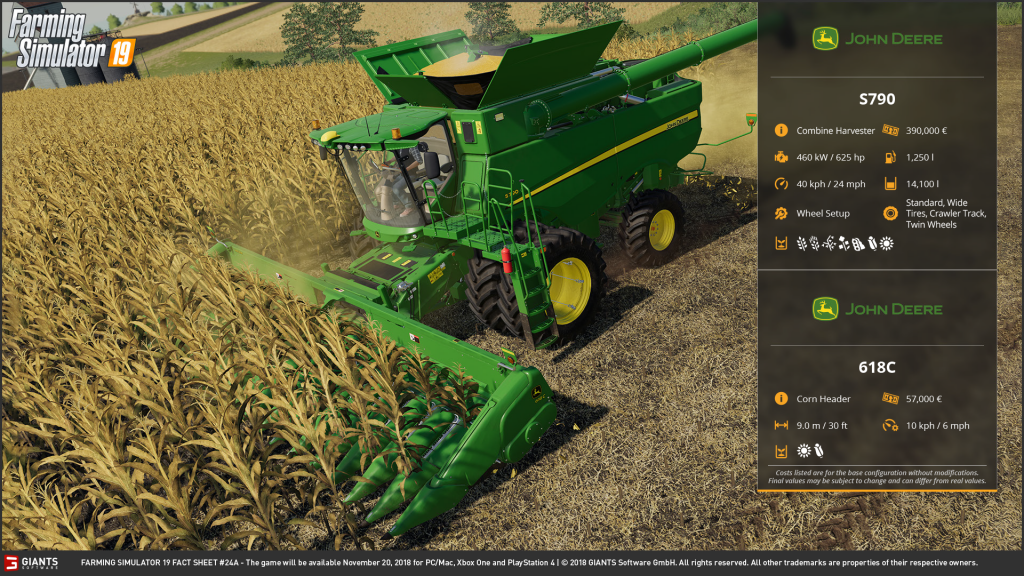 Well well, isn’t this a surprise! Given how firmly Lars “Lisertan” Malcharek (GIANTS’ Community Manager) had assured us that there wouldn’t be any additional John Deere combine harvesters in the game, I had put absolute faith in the fact that it was true. However, it looks like GIANTS was holding an ace up their sleeve and just wanted to see the most hardcore of John Deere fans squirm a bit before they let this one slip. And there you have it, the John Deere S Series combine.

With a whopping 625 horsepower and a 14,100 litre tank capacity, this green beast rivals the New Holland CR10.90, which has been the largest combine in the base game for quite some time now (653 horsepower/14,500 litre tank capacity). While slightly smaller than the CR10.90, the S790 isn’t far off, and looks as though it will serve as an excellent option for players looking for a large, high-end combine. It also provides several options for its wheel setup, with standard, wide tires, twin wheels, and a crawler track to suit each player’s individual tastes.

The 618C corn header is 30 feet wide, making it a 12 row corn header (though I suppose number of rows in the game isn’t quite as relevant as the total width). As is standard for corn headers in the game, it’s capable of harvesting both corn and sunflowers, and will operate at the regular 10 km/h (6 mph). I’m sure some players will be longing for a wider corn/sunflower header, so we’ll have to see if GIANTS has another surprise, or if we’ll have to rely on a mod to fulfill that need.

In any case, it’s fantastic to see the S Series make its entry to the Farming Simulator series, as I – among many others – felt that John Deere’s lineup in the game would be far from complete if it didn’t make it in for some reason. 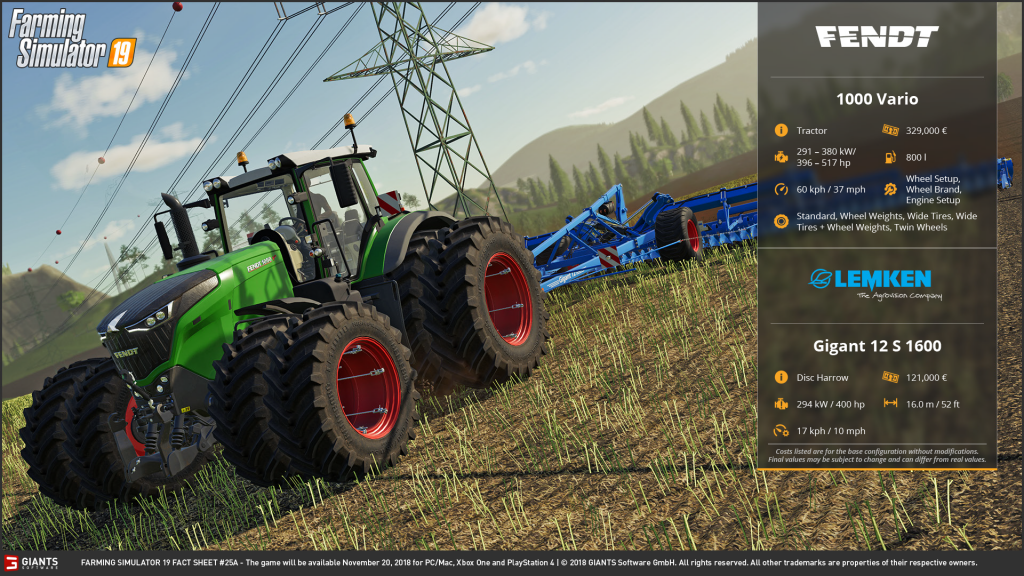 As previously mentioned, those who watched the “Fendt sound recording” video earlier this week will have noticed that the staff were recording sound for the 1000 Vario series and the 900 MT series of Fendt tractors. While the 1050 was a very popular mod for Farming Simulator 17, this fact sheet provides us with our first look at this beastly tractor fully modeled by GIANTS – and it’s beautiful. Ranging from 396 to 517 horsepower, and offering several different wheel choices, this tractor will be a true workhorse for many different field tasks.

The Fendt 1050 in the fact sheet is shown pulling a Lemken Gigant 12 S 1600 disc harrow, which was not present in Farming Simulator 17‘s base game. The name “gigant” suits it well, as this is a massive piece of tillage equipment. Requiring 400 horsepower to pull its 16.0 metre (51 foot) width, this blue monster will certainly till your fields quickly. And you’ll want to do just that in order to plant seeds and make way for the beasts in the next fact sheet… 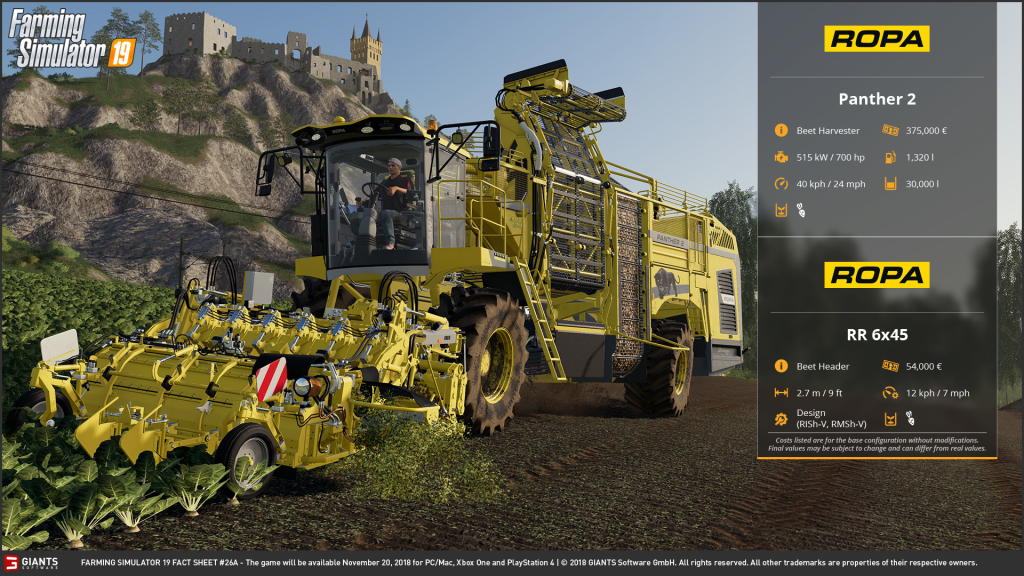 ROPA was first introduced to the series in Farming Simulator 17 as a downloadable content (DLC) pack. However, that pack didn’t include the equipment shown in this fact sheet. The Panther 2 beet harvester – as is the case with all self-propelled beet harvesters – is rather expensive. Costing a total of $429,000 for the harvester and header, this machine will cost you a pretty penny. That being said, sugar beets are generally quite profitable in Farming Simulator games, and you should be able to recoup that investment in no time.

It’s great to see a beet harvester with a relatively large holding capacity, since they tend to fill up quite quickly. With 30,000 litres of space, the Panther 2 should be able to run consistently without needing the frequent unloading of some of the smaller harvesters we usually see. The RR 6×45 header is fairly small, though this is par for the course for sugar beet harvesters – you won’t see any 40+ foot headers on these machines. I’m not very familiar with sugar beet equipment, so I’m not sure what the design option for the header means: will it serve a functional or cosmetic purpose? I guess we’ll have to see (or you can let me know on Twitter if you know the answer!).

Regardless, if you thought the Panther 2 was big, wait until you see its big brother… 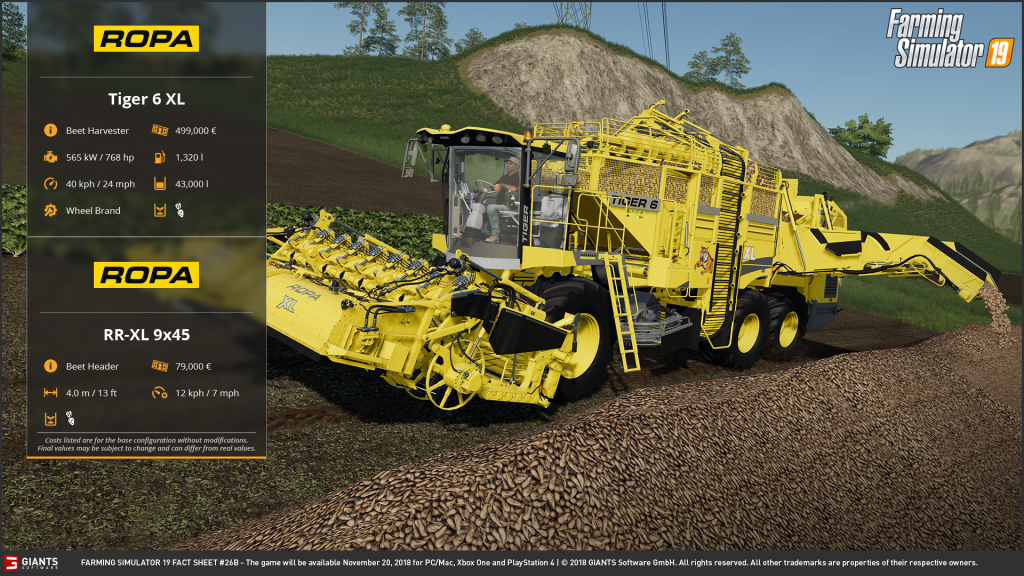 I’ve seen a lot of fans start to wonder about the sugar beet side of the game, seeing as we haven’t been shown any beet harvesters until now. But now we’ve got not one, but two in one set of fact sheets! The ROPA Tiger 6 XL is an absolute monster, boasting a massive 768 horsepower and an even more impressive 43,000 litre holding capacity. That kind of size will cost you though, as you’ll need upwards of $578,000 to buy this harvester and the accompanying header. The Tiger 6 XL, unlike the Panther 2 above, was part of the ROPA DLC for Farming Simulator 17, and I’m certain that many players will be happy to see it return.

The RR-XL 9×45 header is still small by comparison to regular combine headers, but it’s almost 50% larger than the 6×45 employed by the Panther 2. When you consider the header’s 4.0 metre (13 foot) width and the Tiger 6 XL’s huge capacity, this beet harvester will definitely help you get the job done without feeling like you’re constantly carting for it. In the fact sheet, the harvester is shown unloading into a pile on the side of the field, and so I’m sure we’ll see the return of equipment that will allow for easy loading of those beets into semi-trailers or tippers.

And there you have it, another week of fact sheets in the books. I was genuinely surprised by the reveal of the S790, and it makes me wonder what else GIANTS might be withholding until right before release. With only a couple weeks to go until the November 20 release date, we don’t have long to wait now! Make sure to check back with Scholarly Gamers for any additional news on Farming Simulator 19 in the coming days before it releases.