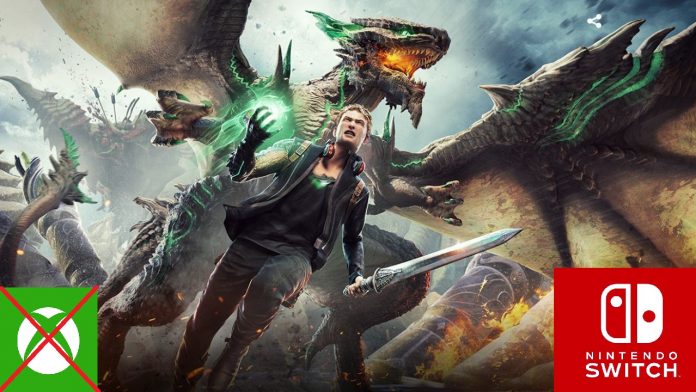 Emphasis on the word “allegedly.”

According to a report recently published by Nintendo Insider, the previously grounded Scalebound is being resurrected as a Nintendo Switch exclusive. It’s important to note that at this time, we only have confirmation of unnamed sources cited by Nintendo Insider as evidence of this decision.

Many people — especially Xbox One owners such as myself — will vividly remember the news of Scalebound‘s cancellation back in January 2017, after an already rocky development path after its initial announcement at E3 in 2014. It was a heart-wrenching cancellation for many, as creator Hideki Kamiya had been personally substantially invested in the project, and its abandonment left him feeling like he had let down fans who had been supporting the project.

I’ll work extra hard to never have to let you down like this again, so I hope you will keep watching over us in the future too.

It’s potentially exciting news for both fans and Kamiya himself that his vision may still grace players hands in the future, albeit on a new platform. That is, if the news is actually confirmed. For Scalebound to make a transition to the Nintendo Switch it would require a substantial restructuring from its initially ambitious plans as a 4K Xbox One exclusive, quite possibly necessitating a complete rebuild.

The Nintendo Insider article itself speculates quite broadly based off what they were informed by their source. This includes connecting the news to a comment made by Game Informer senior editor Imran Khan during an appearance on Kinda Funny Games this past week about a dead game that Nintendo was planning to revive.

Speculation aside, we actually don’t have any concrete facts that would lead us to believe Scalebound has been revived. As the Insider report notes, the trademark for the game was abandoned in December 2017 and has yet to be picked up by another company. Typically one of the first moves that companies make when advancing a project is to ensure necessary trademarks are in place, but we may still see a filing in the future.

On the flipside of the coin, it is well known that Nintendo and PlatinumGames have been building a strong relationship for years, with the developer releasing their first game, Madworld, exclusively for Nintendo Wii in 2009.

PlatinumGames have always been heralded as leaders in their field, with industry champions such as Hideo Kojima singing their praises after the close work they did with Capcom on franchises like Resident Evil and Devil May Cry. When Kojima Productions was looking for a developer to work with on Metal Gear Rising, he said they were the only company that could work on that style of action game.

Their relationship with Nintendo has grown in the past decade, with the team leading on games like Bayonetta 2 and Star Fox Guard, as well as being slotted to lead development on the upcoming Astral Chain and Bayonetta 3 for Nintendo Switch.

But Scalebound? The skeptic and the historian in me are loudly yelling to wait for more conclusive information before I’ll be convinced that Nintendo is tipping the scales in that direction.

If the new does happen to be true though? Nintendo breathing life back into a game that Microsoft had to shelve would be quite the accomplishment, and we will be avidly waiting for more news from PlatinumGames themselves, confirming or denying this report.