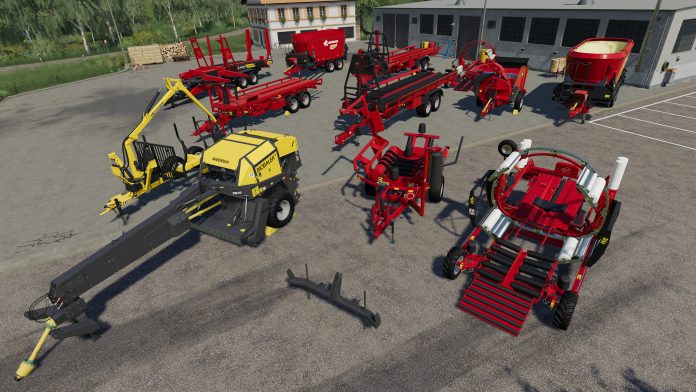 GIANTS Software has announced the first set of downloadable content (DLC) for Farming Simulator 19, which released late last year. Players have been anxiously anticipating the announcement of a DLC pack, as GIANTS often follows a similar schedule for announcing & releasing the game’s DLC. According to an email sent by GIANTS’ Community Manager, Lars “Lisertan” Malcharek, the upcoming DLC will feature equipment from the Anderson Group, and focus on both bales and forestry.

Farming Simulator typically sees a number of DLC packs released over the course of the life of each iteration (GIANTS has historically produced a new version of the game every two years). For the more recent versions of the game (e.g., Farming Simulator 15 and 17), the first DLC pack has focused on a single brand, showcasing the variety and utility of that brand’s equipment lineup. The Anderson Group DLC follows suit and will include the following equipment:

This range of equipment will give players new tools to use when taking care of their animals, including several new ways of handling bales (wrappers & auto-loading trailers) and mixing feed. The DLC will feature an in-line bale wrapper, allowing players to create a long white string of silage bales if they so choose. The pack also looks to include a new log loading trailer, similar to the Stepa trailer that is already in the game.

Of particular interest to me though, is the BioBaler WB-55. The Anderson Group’s website indicates that the BioBaler “cuts and compacts biomass into dense round bales” in a single pass, and can make bales of willow or poplar. This seems to present an alternative method – rather than using a forage harvester to chip the wood into trailers – for players who want to make use of the game’s poplar crop. I’ll be very curious to see this machine in action, as poplar is not a crop I’m overly familiar with, and I’ve certainly never seen a piece of equipment like the BioBaler!

Some players may be disappointed to see that the DLC does not include CLAAS, following an announcement that GIANTS had entered a partnership with them. However, a CLAAS DLC has not yet been confirmed, and it’s unclear exactly what that partnership includes. We’ll just have to wait for more details to be revealed!

The Anderson Group DLC for Farming Simulator 19 will release on PC/Mac, PS4 and Xbox One on March 26, 2019 at a price of $9.99 USD/9,99€. Those who have purchased the Season Pass (console-only) will receive the DLC for free. PC/Mac users may pre-order the DLC through GIANTS’ website, or purchase the DLC through Steam once it releases, while console players will have to wait to purchase the DLC through their respective online stores at release.

Be sure to follow Scholarly Gamers for more Farming Simulator 19 news!