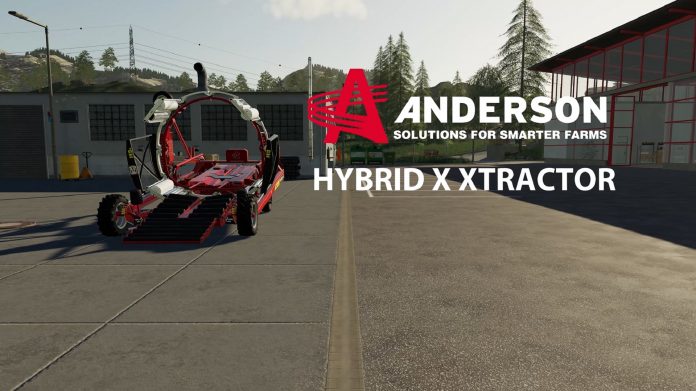 GIANTS Software has released a tutorial video showing off a key piece of Farming Simulator 19’s upcoming Anderson Group DLC that will be arriving on all platforms on March 26, 2019. The video gives players a closer look at the HYBRID X XTRACTOR, an inline bale wrapper that can handle both round and square bales. Though there are already bale wrapping machines in the game, the HYBRID X XTRACTOR is a unique addition to the existing equipment lineup, as it offers the ability to create a long row of wrapped bales by feeding them into the machine one by one.

The HYBRID X XTRACTOR is a standalone machine that can be towed by a tractor to a particular location (e.g., a field where you’ve amassed a number of grass bales), then adjusted manually by “entering” the machine and moving it around to ensure you get it in the best orientation to feed in the bales. Then, players will need to use a front loader, skidsteer or telehandler to place bales in the machine one by one, and it will wrap them in plastic wrap. The machine cannot combine a string of round bales with a string of square bales, so you’ll have to be consistent in what you’re putting in – however, I don’t imagine this will be a problem for most players, since typically one tends to stick with one type of bale or the other.

The HYBRID X XTRACTOR model is very well made, right down to the warning labels and plastic wrap. The video doesn’t definitively indicate whether you’ll be able to choose the colour of wrap that the machine uses, but it looks as though there are some bales wrapped in a light green colour in the background (whereas the bales being wrapped in the demonstration are clearly white). Once the machine has created a long tube of bales, it can be “unloaded” and the tube will be sealed – players will then be able to “cut open” each individual bale, so that they can take as many or as few as they need.

The purpose of wrapping the bales is to make the bales ferment, as once they’re wrapped they will instantly turn from grass into silage, which can then be used to feed to cows in the game. The best use for silage bales is “total mixed ration” (TMR), which is a mixture of hay, straw, and silage that will ensure the greatest milk production from the cows. The Anderson Group DLC will also provide two additional mixing wagons with relatively large capacities; the largest of the two – the Anderson A950 – can hold up to 29,353 litres of TMR. This will make players’ lives much easier when caring for large numbers of cows, as the largest TMR mixer available in the base game (the Strautmann VM 1702 Double SF) only holds 17,000 litres.

I’m very much looking forward to using the Anderson HYBRID X XTRACTOR, as I think it will provide new ways to store bales and care for animals. On the dairy farm I grew up on, we often used inline wrappers very similar to the HYBRID X XTRACTOR – as do many other farmers I’m sure – and so I think this machine in particular will help bring yet another taste of realism to the game.