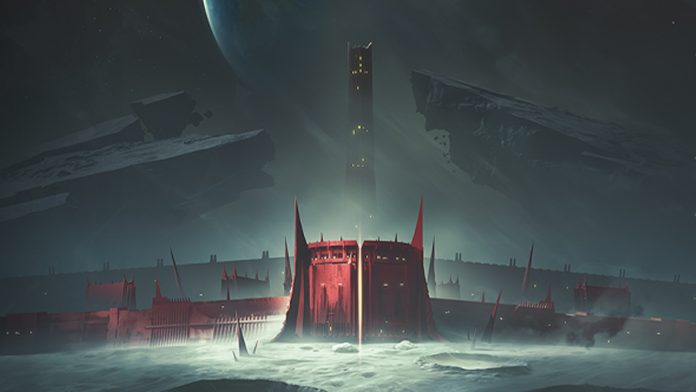 UPDATE: Shortly before publishing, website Engadget reportedly broke embargo and posted information regarding the expansion early this morning. It appears that we can now confirm that cross-save will be coming to Destiny 2, but exclusively between Xbox and PC.

In addition to this, Destiny will also be making its way towards the Steam sales platform and Year One content will be free-to-play.

Bungie’s reveal stream depicting its upcoming expansion and future for Destiny 2 is set to go live at 1 p.m. ET Thursday, but we’ve already been treated to leaks datamined from its Tuesday update, 2.5.0.1, launching the Season of Opulence.

We now have a name for the upcoming expansion, Shadowkeep, as well as some solid hints that we’re at least getting some much-demanded cross-play features to the magic-space-wizard shooter.

That Shadowkeep came from the moon

One of the first things data-mined from the Destiny 2 update was an unreleased banner advertising the pre-order for the next big expansion to the franchise: Shadowkeep. As the banner states, this expansion is going to return Guardians to the moon, which was the second planet you explored in the first game, but hasn’t seen any player’s light in the sequel yet.

The banner image shows a giant Hive-like spire with red citadel gates in front of it, hinting that we’re probably going yet again blast away at the game’s magic-gothic-space-bug Hive race. There was speculation that year three of Destiny 2 was going to see us fight the Darkness, a race seen traveling in Pyramid-style ships through space which was advertised before the first game came out, and a split-second glimpse showed it in the epilogue cinematic of season one of Destiny 2, but we have not yet seen their appearance as of yet.

Traditionally, Bungie releases these new year expansions in September, and they generally offer new planets to explore, a new storyline, and fix some of the game balancing and mechanics. We can likely expect the same from this expansion.

A data-mined image from earlier this week pointed out that cross-saves are most likely coming to Destiny 2, meaning you won’t have to keep calling in sick to grind out a separate Hunter, Wizard, and Titan on PC, Xbox, and PlayStation simultaneously. This might mean you’ll still have to buy the game on multiple systems, but at least you’ll be able to play with your friends on any device and still have all the same gear.

Another leak points that the game will be coming to Google’s upcoming Stadia, which further prompts questions about if cross-save will function across those systems.

A tweet from Bungie’s spokesperson David “DeeJ” Dague indicated that the reveal stream is going to be on several platforms, “And that’s not the only signal that Bungie will be doing things differently from here on out.”

It seems likely that he’s hinting at cross-saves or cross-play; something that would bring Destiny to the forefront of its competition. Will Stadia be stuck with Stadia or PC, or can you play with anyone? Games like Fortnite, Rocket League, and Dauntless have successfully been able to implement crossplay that works between PC, Xbox, and PlayStation systems, however, the road for those games to get there has been long and difficult.

With Activision-Blizzard stating cross-play is coming to a long-running franchise, this announcement by Bungie might have been just in the nick of time to secure Destiny 2as the first major first-person shooter to offer the service.

Bungie and Destiny 2 after Activision

Bungie is also likely to detail how the company is going to be moving forward after separating from their publisher, Activision-Blizzard. Bungie announced back in January that they were moving from the Call of Duty publisher and going to handle marketing on their own, but have not yet announced what that means.

Currently, Destiny 2 is sold on PC through the Battle.net, the traditional store for Blizzard games. It has now been revealed through the Engadget leak though that Destiny 2 will be making its way to Steam, likely to the delight of many PC gamers

Engadget reportedly broke embargo and posted information about the expansion early on Thursday morning. According to the article, Destiny 2 is coming to Steam, and year-one content will be free-to-play. As well, cross-save between PC and Xbox will be a thing. Sorry, PlayStation fellers, looks like Sony struck again. Bungie will reportedly also not release exclusive PlayStation content anymore.

The article still shows up on Google with a meta description, but returns a 404 error when accessed.

A pre-order page was also briefly on the Microsoft Store earlier Thursday, listing a September 17th release for the game.

GuardianCon 2017: The Conspicuous Absence of Bungie