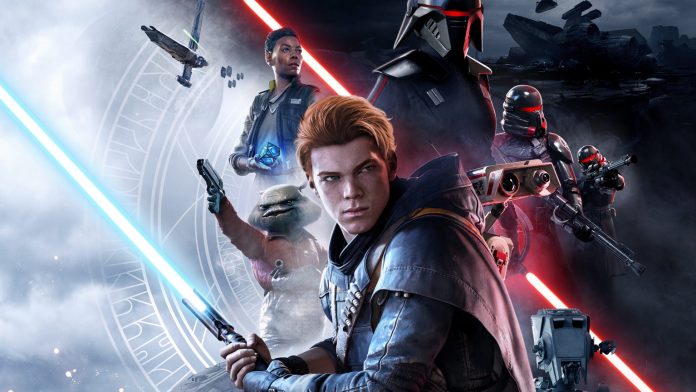 EA has kicked off E3 this year with their EA Play stream. And they came out swinging with 15 minutes of gameplay for the new Star Wars game, Star Wars Jedi: Fallen Order, developed by Respawn Entertainment of Titanfall and Apex Legends fame.

Jedi: Fallen Order takes place following the execution of Order 66 at the end of Revenge of the Sith, an order meant to wipe out all known Jedi in the galaxy. Some, like the protagonist Cal Kestis, were able to escape being killed during this time. According to the developers present during the live stream, the events of the gameplay demo take place about 3 hours into the game. The gameplay demo takes place on Kashyyyk, the home planet of the Wookiees, with Saw Gerrara (with Forest Whitaker reprising his role from Rogue One) tasking Cal with freeing the Wookiees. Within seconds of the gameplay starting we see Cal use Force abilities as well as something Respawn is well known for: wall running.

From wall running to climbing, there appears to be a variety of gameplay elements at play in Jedi: Fallen Order. And, as with seemingly every other new protagonist they have introduced to Star Wars with the new canon, Cal comes equipped with a lovable little droid companion, BD-1.

BD-1 adds a variety of little gameplay gimmicks, like hacking into a terminal to open a door, or providing Cal with a stim-pack to heal himself. However, the devs did state during the stream that Cal is exposed and unable to perform any actions while receiving this stim-pack and you only have a limited number of them.

There appears to be a variety of different Force powers available to the player. From your basic Force push and pull abilities, and lightsaber throwing, Respawn demonstrated one very similar to something we have only seen Kylo Ren in Force Awakens do thus far: stop projectiles and objects in mid-air. This allowed the person who played the gameplay demo to chain some cool Force power combos involving stopping the blaster bolt, pulling a Stormtrooper towards himself and throwing him into his own blaster bolt.

Speaking of Stormtroopers, while there appears to be a lot of them to mow through as Cal with your trusty lightsaber, they are not the only enemy you will face on your journey. They showed off a number of large spider aliens (gross), one of which Cal dispatched quite easily with a powerful counter-attack. Then finally, we saw the Jedi killer Inquisitors, who had a unique move set specifically designed around fighting Jedi. The end of the gameplay showed a KX security droid similar to K-2SO from Rogue One engaging Cal in what looks to be a boss fight.

While the game does appear to be a linear experience, it does appear to offer a variety of ways to approach certain scenarios. When the Stormtroopers were fighting off the spiders, it almost looked as if the player could either hop right down into the fray, wait it out, or, as demonstrated, hop up along the higher ledge and take out the Stormtrooper up top before hopping down. It also showed a side area where the player gathered a voice comm collectible, hinting at areas being a bit more explorable than may seem at first glance.

So far, EA’s attempts at Star Wars games within the new canon have been met with a…mixed reception. DICE’s Battlefront games have been a bit of a mixed bag depending on who you ask, and Galaxy of Heroes is the epitome of mobile game greediness. However, this is their first attempt at a single-player story driven game, from a studio that released a top-notch single-player campaign in Titanfall 2. And, speaking as a gigantic Star Wars fan, this definitely looks like it could be a fun ride, with a lot of fun Force combos to play with. There are lots of little Easter eggs throughout the gameplay, from droid bodies lying around, to a passing quip from a Stormtrooper about having the high ground which is sure to appeal to the hardcore fans.

There’s a lot more to discuss about the game in general, but the gameplay demo gave us a bit of a taste of what’s to come. Jedi: Fallen Order is going to be a third-person action adventure game, which releases on November 15, 2019.