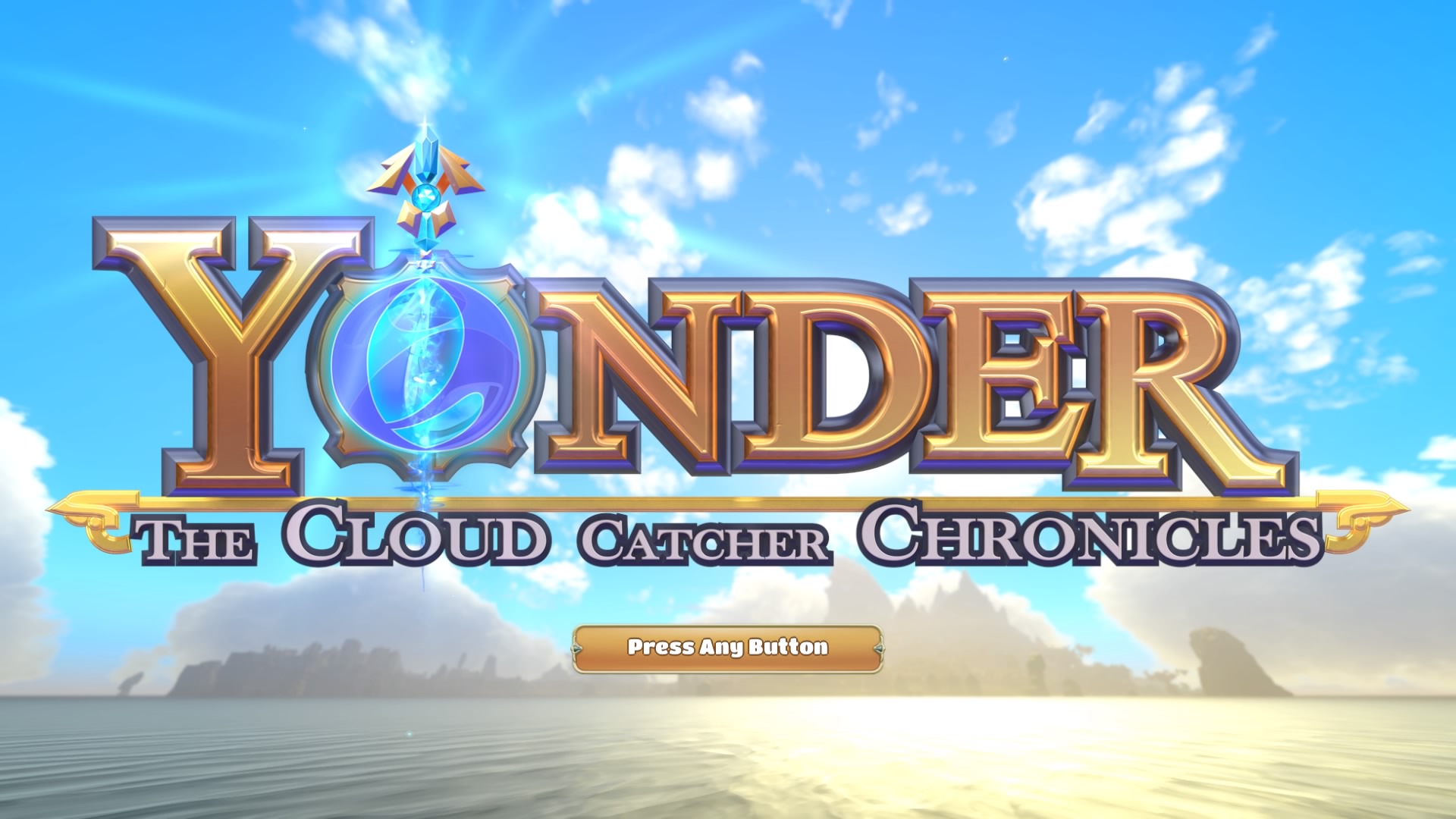 If you have ever found yourself wanting to explore an adorable, engaging world with a variety of biomes to explore and creatures to befriend, Prideful Sloth’s Yonder: The Cloud Catcher Chronicles is the game for you. Releasing July 18th for PlayStation 4 and Steam, Yonder is a game that I have personally been anticipating for months. I was not disappointed.

Once you go through a relatively simple character creation, the adventure immediately begins. If you’re not satisfied with the amount of customization at the start, there is plenty more to fiddle with throughout the game, including a wealth of apparel to collect and dress up in. Your story begins on a ship headed for Gemea, a land most in the world thought to be a fairytale. The ship is guided by your Celestial Compass, a magical item left to you by your family, which shows you the direction of the long-lost land. Once you signal the captain to head into a bank of fog, things take a turn.

Shipwrecked and alone, you find yourself at your destination, climbing out of a watery cave to take in an incredible view of the land of Gemea. For all of the landscape reveals I’ve witnessed in video games, Yonder had me immediately captivated. Lush green grasses and beautiful mountains stretched across the horizon, marred by a purple mist called Murk that plagues the land. Making your way to the nearest village, you rest just long enough to have a vision of a large spirit named Aaerie. The creature instructs you on your new life as a ‘Sprite-Seer’, and Aaerie gives you the task of returning the land to what it was before the Murk, with a little help from the fairy-like Sprites you find along the way. 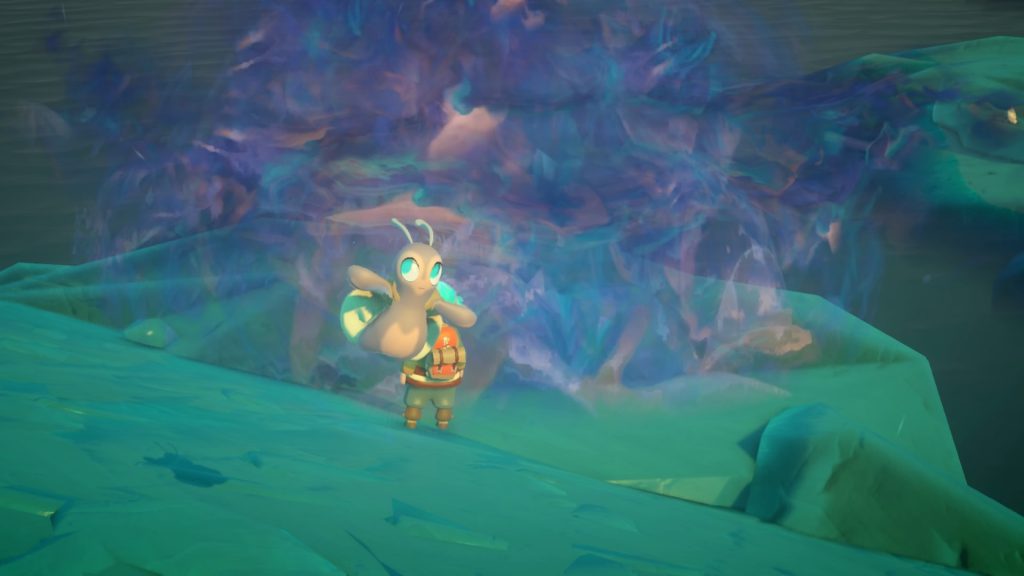 Yonder is a wonder to behold when it comes to its playful atmosphere and absolutely beautiful surroundings, which are only enhanced by the melodic soundtrack. Every area is presented as a unique biome with its own weather patterns, flora, and fauna, but they flow from one to another very naturally. As the sun and moon cycle overhead, the lighting constantly changes to reflect the time, signaled additionally by a day and season cycle in your HUD. Even though many of the biomes themselves feel representative of a specific time of year, Yonder even has changing seasons which affect the color and atmosphere in each region uniquely. The music — from the title screen to the ambient — brings the atmosphere together, accompanying the changes in seasons and weather with subtle shifts in the melody.

Gemea is a varied world for you to explore and restore, which are the two main goals of Yonder. The game is entirely combat-free, focusing instead on exploration, resource collection and crafting, farming, and a few quest-related riddles thrown in for good measure. Many of the quests that you undertake in the game will have you collecting or delivering a resource, but they take you to the far reaches of each biome and invite you to explore all that the game has to offer. The best thing you can do in Yonder is explore every nook and cranny, and take it all in.

Each region has its own environment; the Grasslands is an open plain with rolling hills, while Hearthwind Vale is a mountainous region with sheer cliffs and populated valleys. Dapplewood Forest (my personal favorite) is a lush forest of huge trees and bamboo with purple leaves, and the Radiant Sands featured sprawling dunes and hidden caverns. You can start a farm in each of the regions, raising animals and growing crops to use for crafting and trading with village merchants. There is no currency in Yonder; every item has a value and new items are acquired by trading your collected and crafted wares with townsfolk. 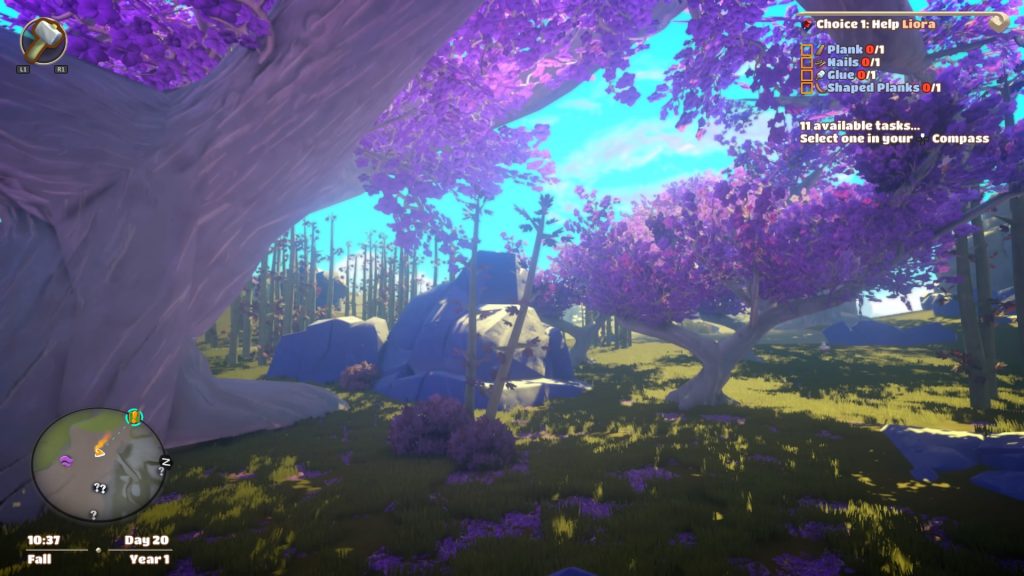 Prideful Sloth has concocted some adorable combinations of animals in Yonder, which you can find and befriend as you roam the biomes. Girpaccas, fabbits, groffles, fernicorns, and more await your friendship in Gemea. Creatures run from you unless you have a specific item that they really enjoy, in which case they will loyally follow you. Once you have a few of that item, you can use it to befriend the animal, which can include taking it back to your very own farm to keep and care for. Some items are easier than others to obtain, but if you follow the main story and talk to villagers, you figure out what each animals like to eat. Not all creatures in the game are new creations. While travelling, you are bound to hear meowing. Constantly. Cats exist as themselves in Yonder; no fusion or renaming needed. Each region has a different type of cat to collect, with a total of 55 kitties to be found hiding in crevasses or sleeping under trees. As far as collectibles go, Yonder couldn’t have found a more adorable one.

Along with different creatures in each region, there are also different guilds to join up with in each biome. Progression through the main story, building your farm, and fully customizing your character require you to become savvy with each of the professions. Tailor, chef, and carpenter are standard RPG roles that join your character’s base knowledge of wayfinding. Added to the job list in Yonder are constructor, tinker, and brewer. Each of these have a joining quest that is fairly straight-forward to complete. Once you create enough items of value from each guild, you earn the rank of Master, which is listed as a different knowledge set in your player menu. Aside from main and personal progression, these guilds will also help you with plenty of side quests along the way.

The further you explore and the more you unlock and build, the more regions you will be able to traverse. Exploration is simple and fun, with no load time between regions (even when you fast travel) to keep you constantly immersed. It is incredibly easy to simply pick a direction and go, finding yourself in lands you had not previously known about. Of course, there are some in-game obstacles along the way to make you work for the next area, like becoming a carpenter to fix a boat or collecting enough material to build a bridge. You can find a shrine in each region which will allow you to fast travel between them, as travelling long distances could sometimes get repetitive. 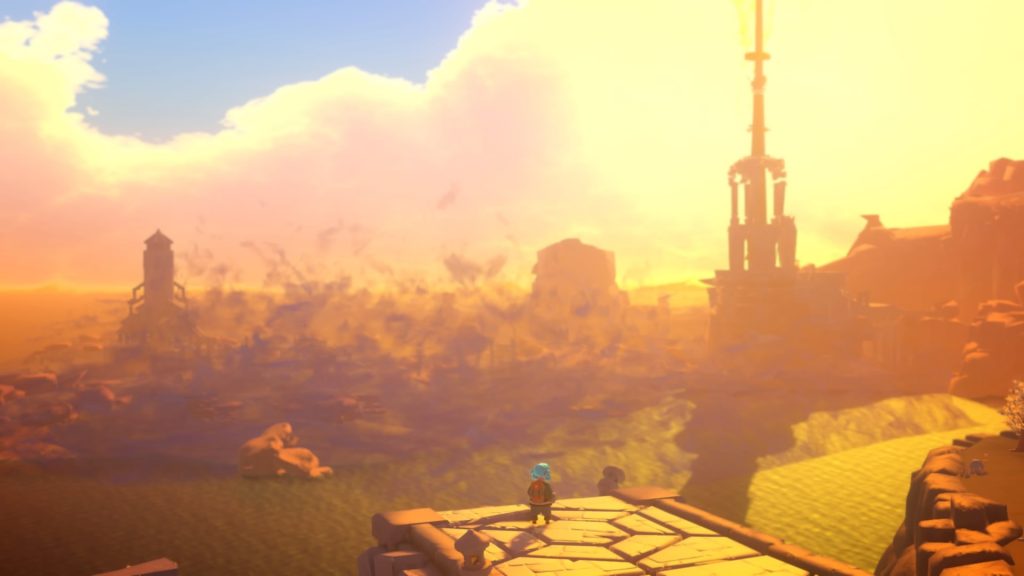 Yonder’s story revolves around the Murk, which you come to understand the dire weight of when you finally reach The Old Kingdom and witness what’s become of it. Your role as the Sprite-Seer, marking your unique ability to see and collect sprites, makes you the one person capable of saving the realm from this calamity. Restoring Gemea completely requires exploring the farthest reaches of the land and mastering the trade-skills that you’ll learn from the Guilds.

If you wanted to though, you could largely ignore entire swaths of the storyline and focus on collecting, crafting, and expanding your farms. Or perhaps just exploring each region to track down every lost kitten and hidden Sprite. Yonder is a world that does nothing to restrict the player, and everything to empower them to take in the beautiful world at their own leisure.

For a relatively inexpensive game, and the first project from the new Australian studio Prideful Sloth, Yonder: The Cloud Catcher Chronicles is a gem. Playing it feels like The Legend of Zelda, Harvest Moon, and Stardew Valley, with a pinch of Animal Crossing thrown in. It is a gorgeous game with an engaging world that is your playground right from the beginning.