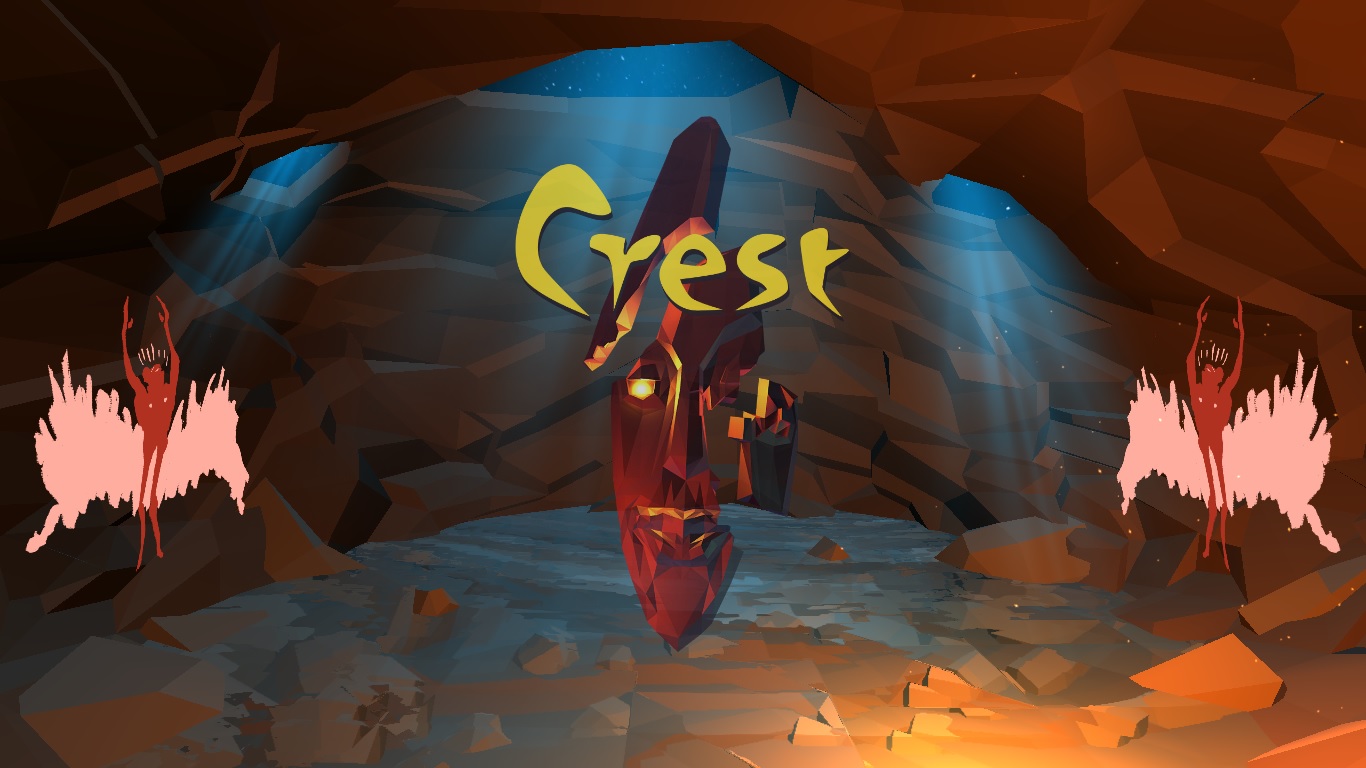 I was excited about being approached to try this game out, as the Scholarly Gamers head honcho chose me personally for this endeavor. It may seem odd that I’m the one chosen for this review as I just said I have no experience with games like Crest, but there actually was a motive behind the decision. Crest touts itself as a “religion simulator,” and I just so happen to be, for lack of a better phrase, the resident religious guy among my fellow scholars. Without going into too much detail about my personal faith, I’ll just say this: you ever heard of the Bible? I believe every word of it.

For that reason, I was chosen. I’m not going to do any comparing between Crest and my personal beliefs, and since I don’t have any personal experience with games in the same genre, I have no basis for comparison. I’m simply going to give my honest opinion on the game.

I’ll start with this: calling the game a religion simulator seems like a bit of a stretch. It is a simulation game, no doubt about that, but there’s not a whole lot of religion to be found here. Commanding your people to perform actions are aptly titled commandments, and a percentage meter in the HUD shows the amount of faith your people have in you, but everything else the game does can be found in any other world-builder. 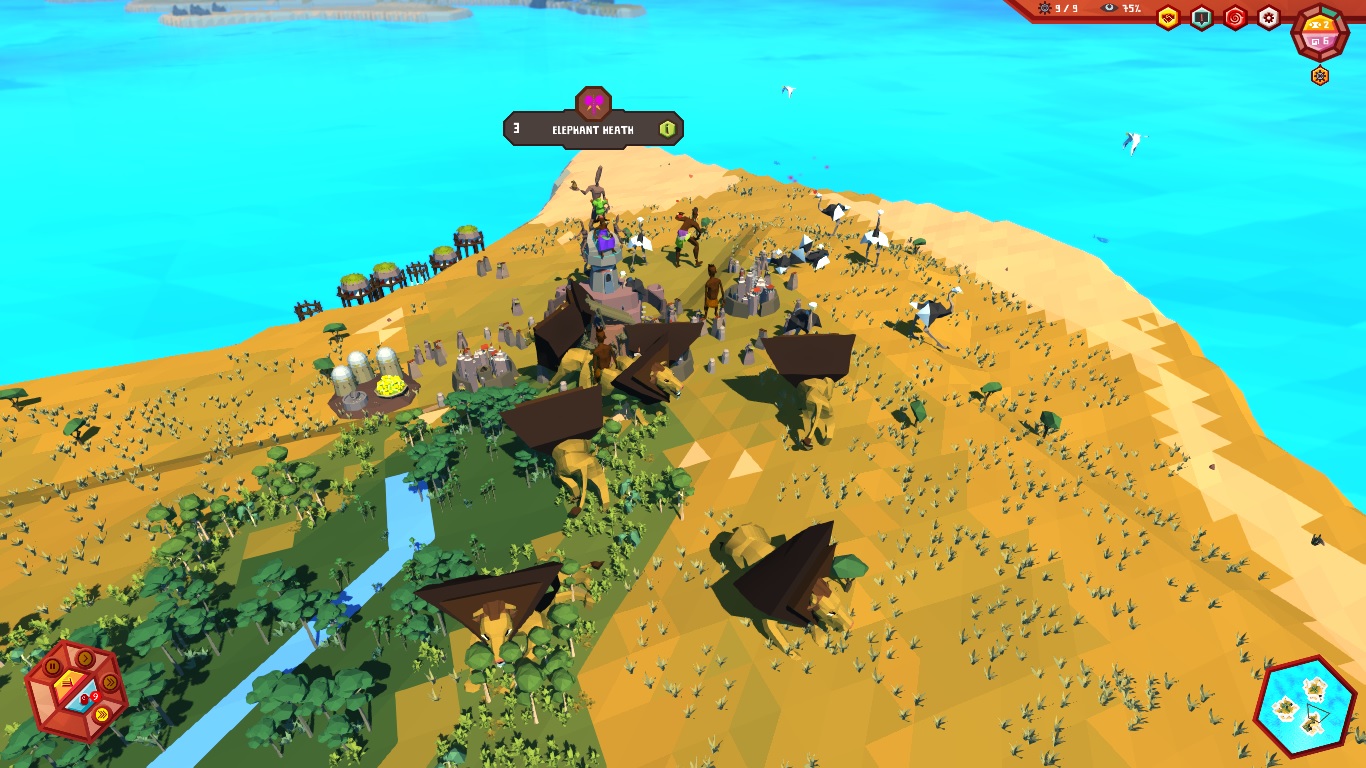 The game has several areas where praise is due. While the game is still in early access, the developers are very forthcoming and communicate with fans regularly. I had never heard of Crest before I fired it up for the first time, so I watched some videos of how the game looked and worked prior to the most recent update. You can definitely see the face-lift it has received over the course of its development. Another area that receives credit is the game’s length. In a genre in which one of the main characteristics is that it warrants a gameplay time of dozens of hours, developer Eat Create Sleep subverted the norm and created a game meant to be played in 20-30 minutes.

But despite playing through the game a dozen or so times, I never really got the hang of what I was doing. Normally I dislike tutorials, but Crest could benefit from one that is a little more fleshed out. They throw almost all of the information at you right up front (and it is a lot of information) and expect you to remember all kinds of different systems at play, and as far as I could tell, there was no way to find that information again unless you start a new game.

In order to issue commandments to your people, you must use your “influence” points. Each commandment uses up 3 influence points and they regenerate after a set period of time. Issuing commandments is a cumbersome process, requiring you to choose a group of people (by selecting a desert icon to choose the people in the badlands, or a wave to command those near the coast), an action (produce/don’t produce, distribute/don’t distribute), and then another people, animal, area, or item. A typical command would be something along the lines of clicking on a desert icon, an outstretched hand, and a picture of a carrot. This command would be: people in the desert will produce food. 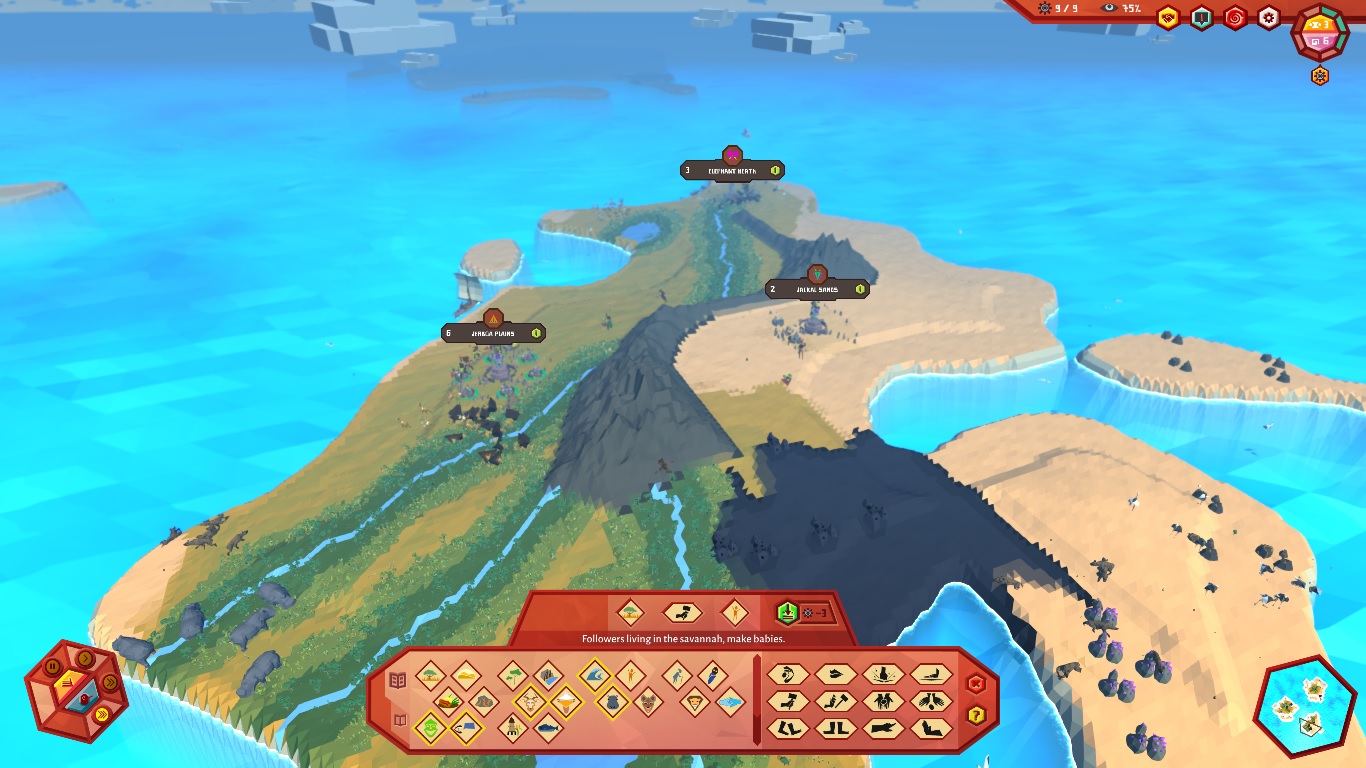 It sounds pretty straightforward, but even after several hours of play I still found myself having to hover over the icons just to know who I was commanding and what I was commanding them to do. This proved to be difficult because the longer the game lasts, the more “words” your people learn. When this happens, a new icon appears in the commandment bar and moves other commandments around. More than once I issued the wrong commandment because I was so used to the icon I wanted being in a certain spot.

The biggest issue I had with Crest was the “free will” that’s given to the world’s inhabitants. Issuing commandments is a complete crap shoot. Occasionally the people will listen, but more often than not you’ll find yourself wishing you could just flood the earth and start over with that one guy who actually obeys you. The people use their free will so often you start to feel like the kid whose father gives him a controller that isn’t hooked up so he can “play.” This usually leads to a tribe being wiped out. I wanted a tribe of two people to migrate to the jungle, but instead one guy killed his fellow man (I named him Cain). I want to replenish the people by having them reproduce, but they decide to farm instead. Then I command them to eat the food they produced, and they die of starvation. 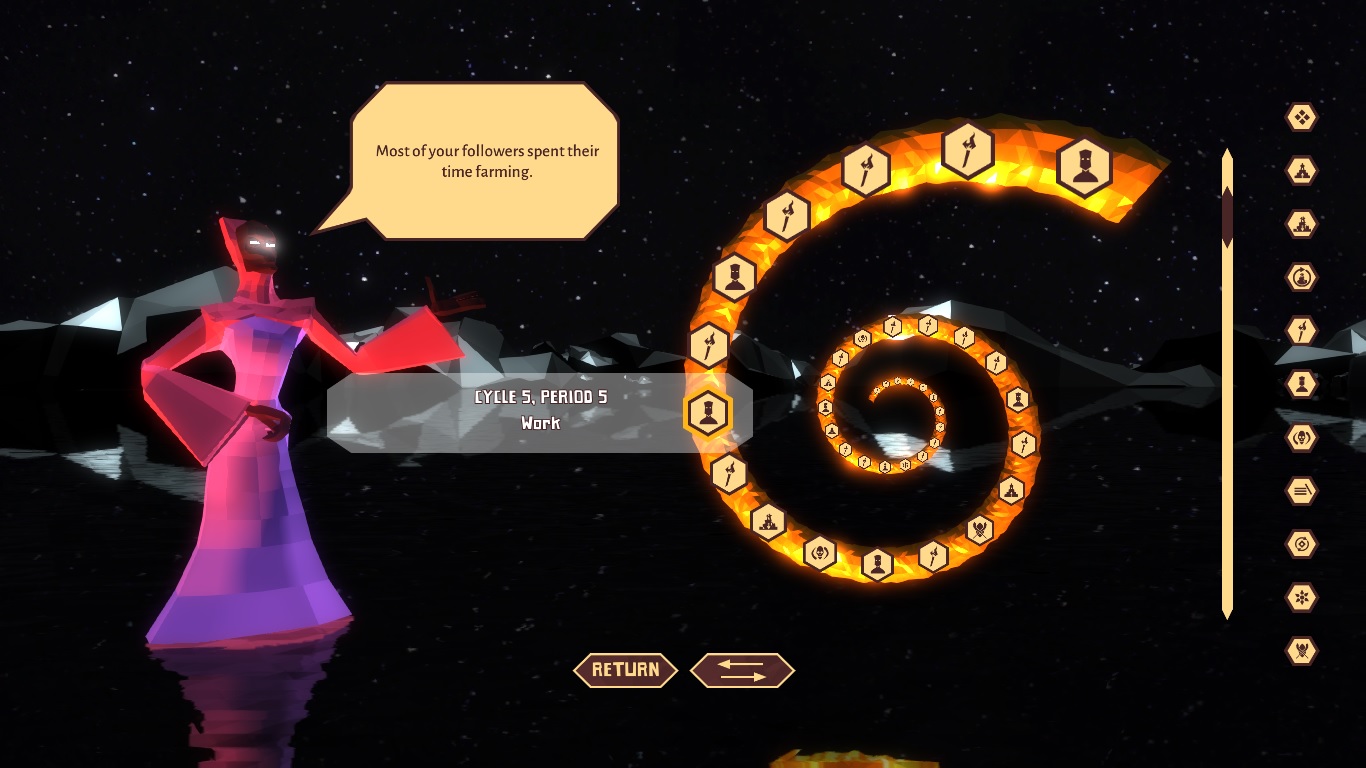 They truly are a rebellious bunch, and I now feel like I have a better understanding of how God actually feels. Perhaps that’s what they mean by calling Crest a religion simulator.

The game moves at three speeds, and the middle speed is definitely the sweet spot. The lowest speed moves at such a snail’s pace that you could make a sandwich before your influence points regenerate, and the fastest speed led to a game with the shortest period of time from creation to extinction. The entirety of the human race lasted about six minutes.

With the right tweaks, Crest has the potential to be something really great. A better tutorial and less free will for the people (which sounds really terrible when read out of context) could benefit the game immensely. The premise of Crest is unique, and I love the idea of a religion simulator, but I didn’t get any greater feeling of empowerment from Crest than I do from games like SimCity or Theme Park, and at least the mechanics in my theme park will build the rides I want them to build when I ask them to. 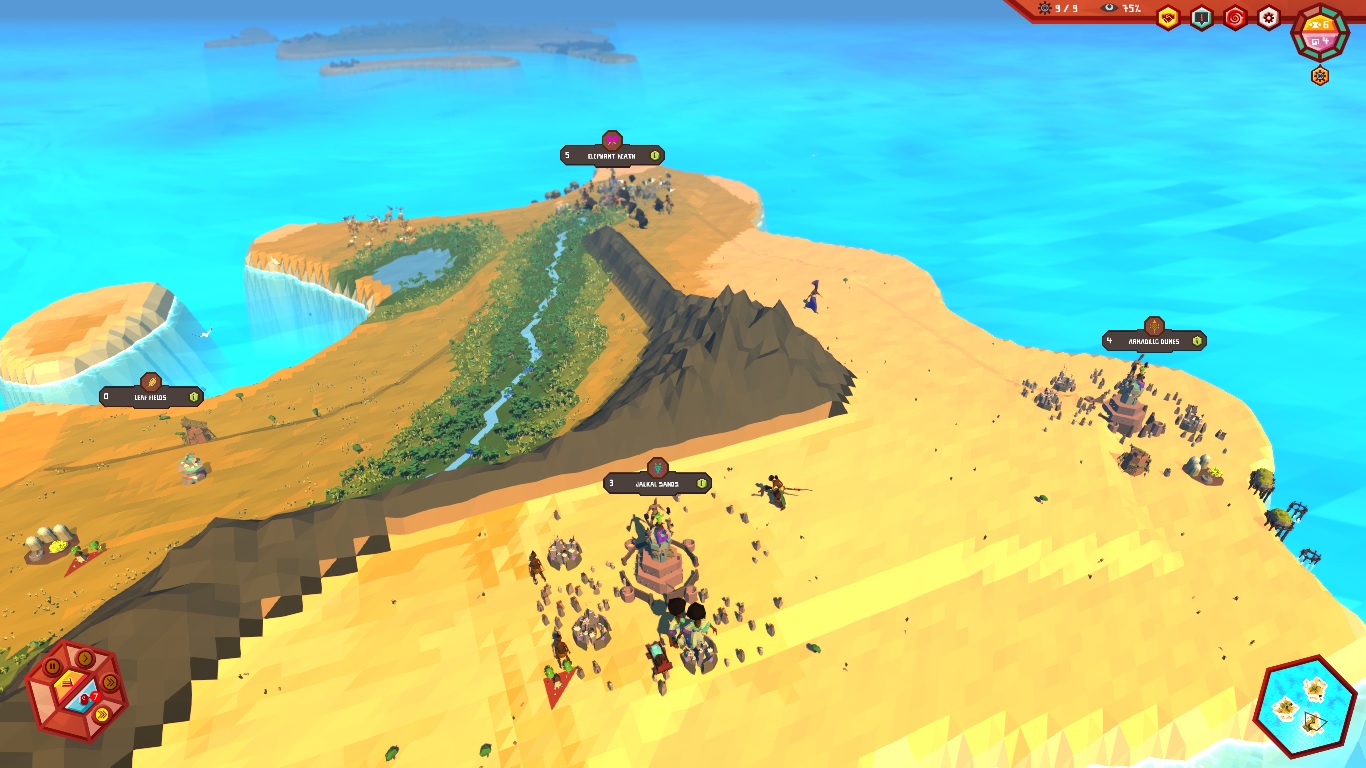 I don’t feel comfortable giving a ranking or a score to an early access game, so I’ll say this: the game sits on Steam at $10.99, and as with any early access game, you’re not spending your money on the game for what it is now, but for the possibility of what it could become. There’s no doubt that Eat Create Sleep have poured their hearts and souls into Crest, and I’m hoping that by the time the game hits its official release date it will more closely resemble the ambitious game it is setting out to be. It’s not quite there yet, but I will be checking in with it periodically to see the progress it makes. There’s a lot of potential in Crest.

Before sitting down to write this, I turned Crest on one last time with the intention of issuing no commandments and just observing the people out of sheer curiosity. Then they proceeded to cultivate land, establish trade routes, reproduce, farm, migrate, declare war, and all the stuff I wanted them to do when I was issuing commandments. They even set sail and wound up traveling to an entirely new island, something I was never able to accomplish on my best game.

If Crest taught me anything, it’s that I suck at being God.