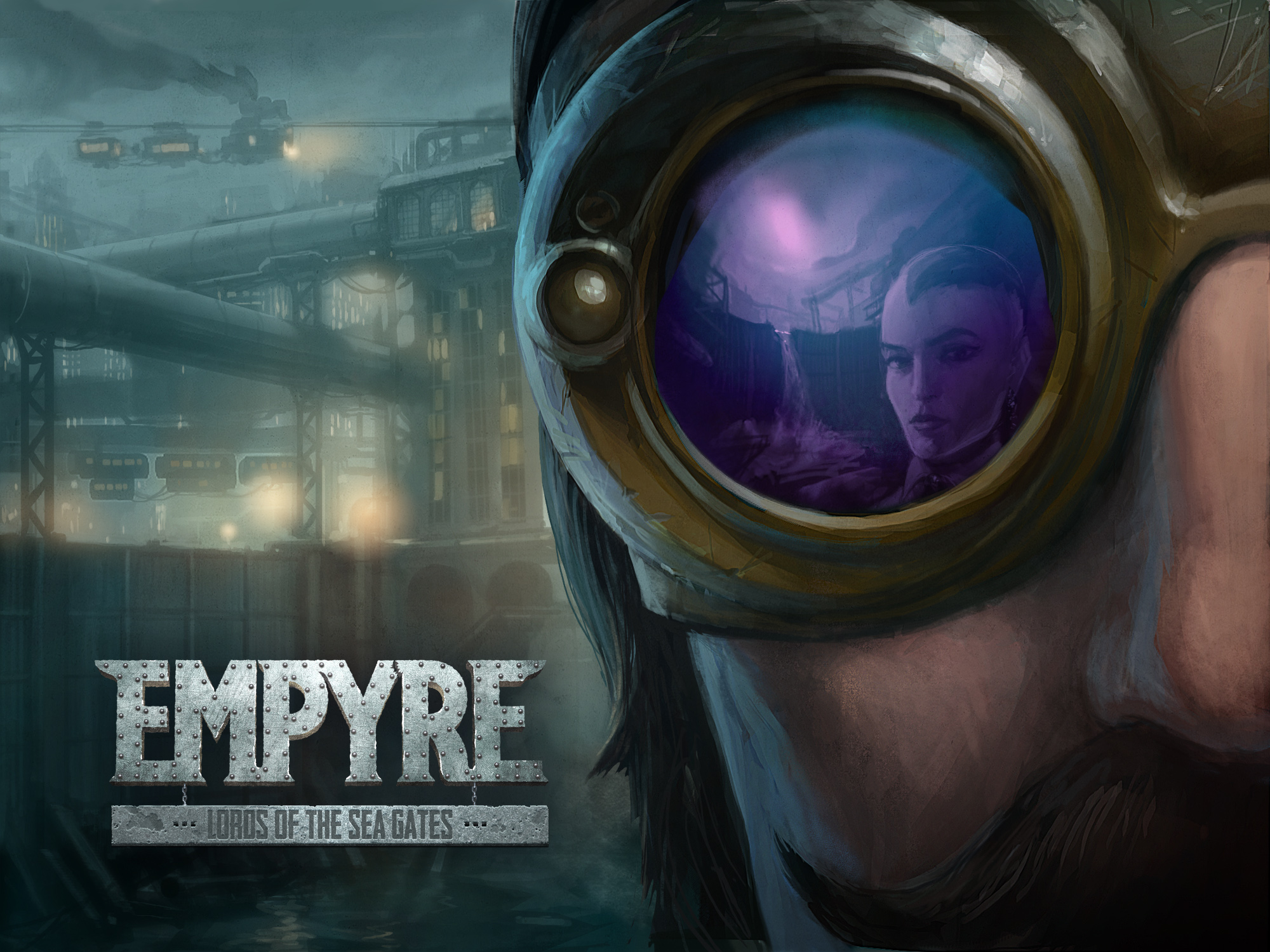 When I see the letters “RPG” used to describe a game, the intrigue immediately kicks in. Being my favorite genre of games, I simply cannot pass up an opportunity to play one. One such opportunity arrived recently in the form of Empyre: Lords of the Sea Gates.

Empyre takes place in a Neo-Victorian New York that has become a compilation of City-States after a disastrous flooding occurred, leaving the city full of nothing but polluted water. Alleyways became canals while the rooftops became the new streets. Fresh water is brought in to the City-States via pipes, and anything that cannot be obtained in this version of New York is traded with those called “Mainlanders.” The people of New York are determined to survive and rebuild what was once the great city they called home. Mysteriously, the fresh water pipes have now stopped flowing, and the full reserve tanks are running out.

This is where your character comes into play, asked by the City-State “Grand Tower” to go find out why the water stopped flowing and restore the fresh water flow.  After choosing one of the four starting characters, you leave and venture out into the unknown, bandit-filled areas between the City-States. Along the way you meet more party members, eventually building up a solid group of six people to control during your travels, each with different skill sets and fighting styles. These characters are quite well developed, with each playable character — as well as many NPCs — having very distinct personalities and speech patterns. The story progresses at a decent pace, mainly through dialogue between characters. There were no big twists or turns that caught me off-guard, but there were some NPCs that did surprise me based on context clues leading up to their meeting. 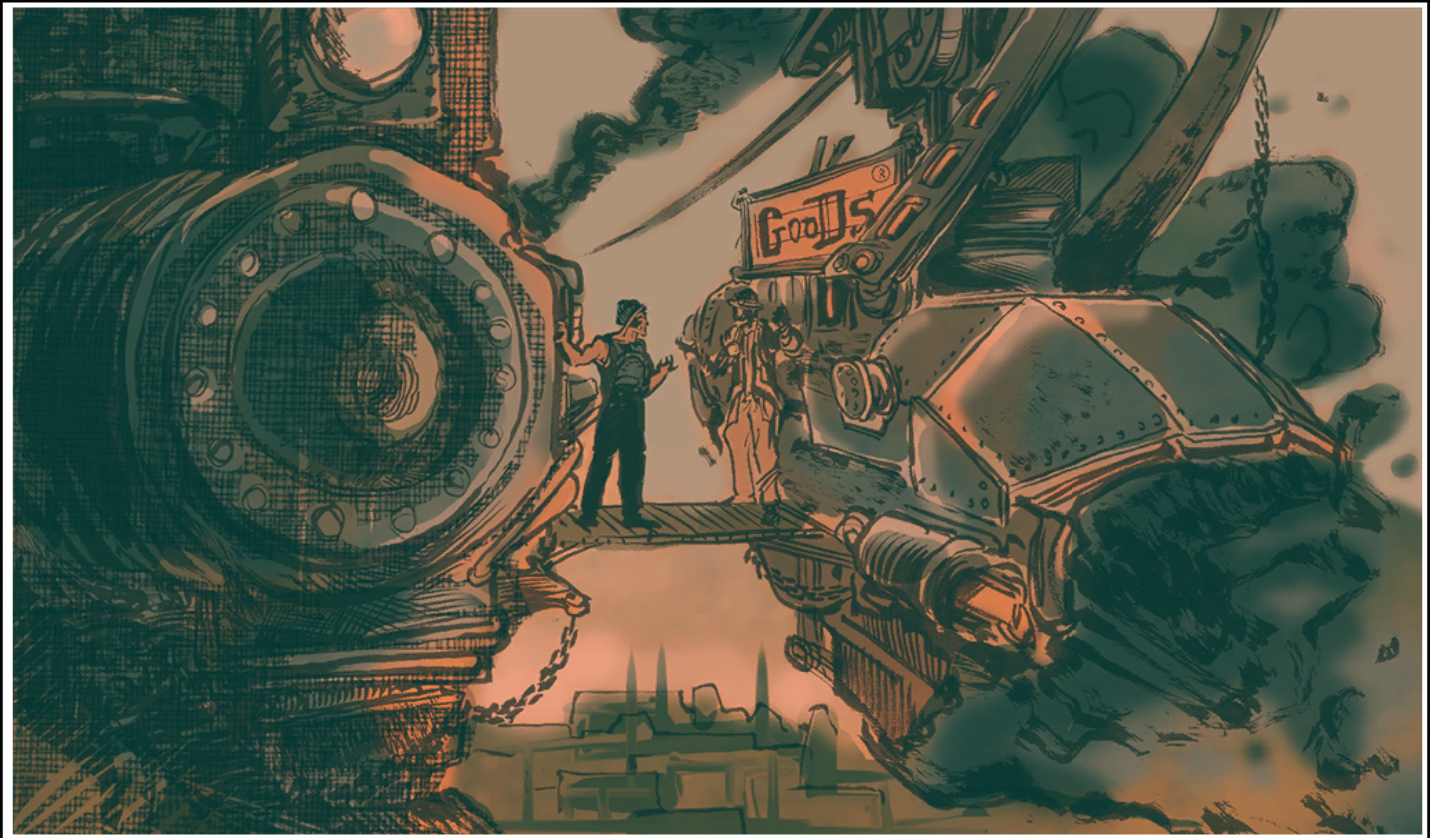 Your party members are fleshed out through side quests of sorts that they’ll ask to go on to uncover some item or exact revenge on a certain enemy in the area, which really provided some interesting insight and backstory that would not have otherwise been known. These side quests can be skipped, and generally only provide backstory for the character in question, but I really found them quite welcome, as not much of the history of the characters is directly explained. A great deal of the missions also gave multiple ways to proceed, some which caused the mission to either be more difficult to pass or the opposite. As the game itself is pretty linear, the option to choose how to proceed in a given area was most welcome and gives reason to replay to see how the other paths would play out instead. All in all, with two separate campaigns — each with three difficulty settings — and all the different dialogue and path options to take in the missions, Empyre provides a fair bit of replayability, as well as plethora of content to explore in this fascinating world.

The visuals and art of the game perfectly display the early 1900s era the game takes place in, right down to the main menu. The whole game is reminiscent of an old black and white movie. While there are colors, they are all dulled and washed out. This really drives the whole “flooded city” feel throughout. Instead of animated cut scenes during some of the story parts, there were comic clips to tell the story. These looked hand-drawn by the artist and were a much-welcomed surprise as I hit the first one in-game. Empyre takes place in 1911 and everything from the cutscenes to the character portraits were made to match that. Shops show up in the form of vending machines, all the weapons are antique in look, and all the armor/outfits in the game fit the era perfectly.

The gameplay was no doubt my favorite part. Being an isometric, top-down RPG, I had a good idea of how the combat system should work thanks to similar games, but the developers did a great job tweaking it to make it feel a little more original. The systems in place allow you to plan the actions your team will take. Once the plan has been laid out, switch the game back to real time and watch the fight play out. Both enemies and allies alike will move and use the assigned actions until the action queue ends, or more actions are given. This can happen at any time, as the planning phase can be entered and exited at will, allowing full control over units in the battle field. 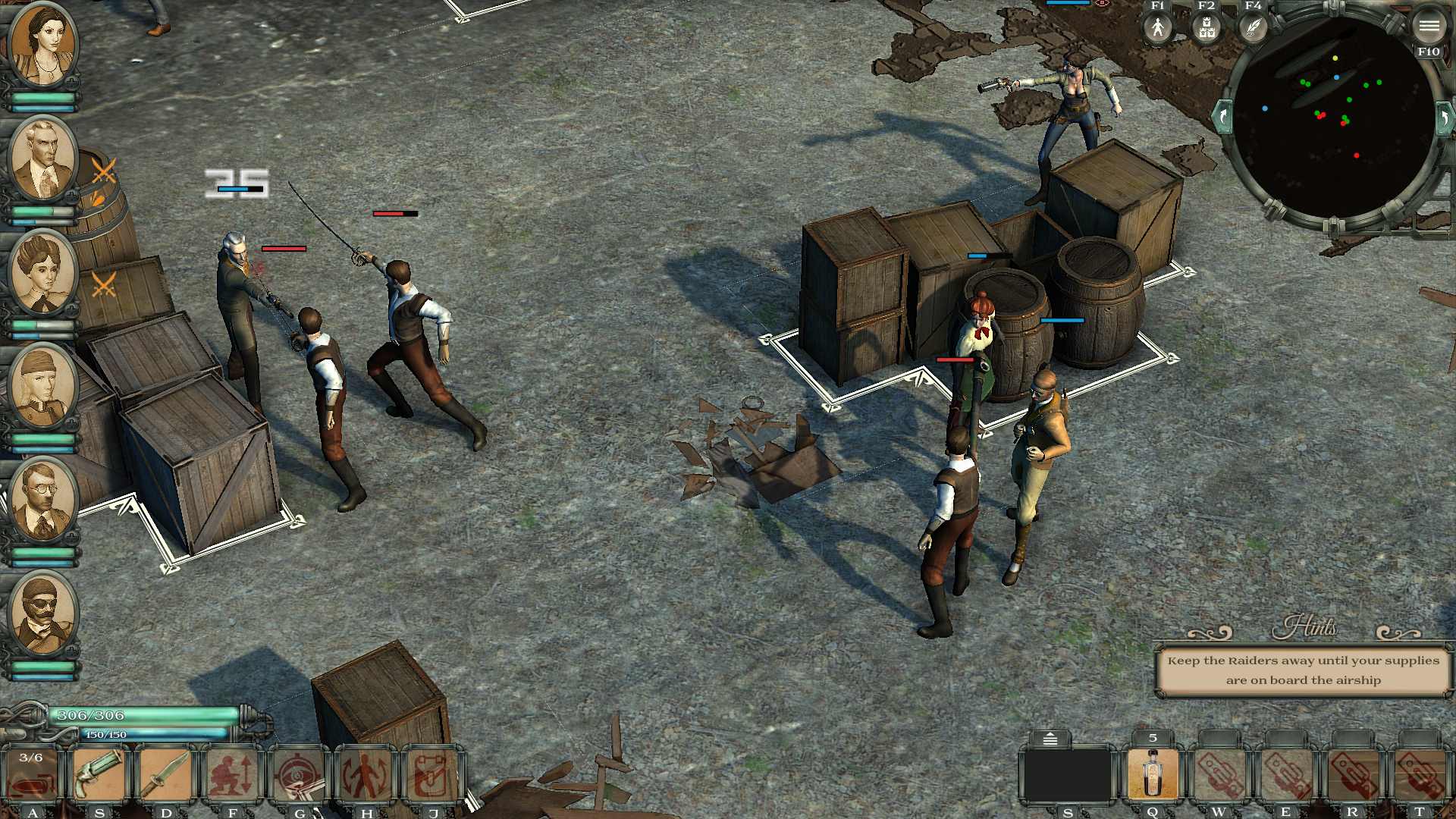 There is plenty of room to show off your tactical skills as well, as enemies will move and change after you input commands and exit the planning phase. Characters also have to reload weapons, stop to use items, and will stop altogether if the target is vanquished. This keeps you engaged with the battle the entire time, as you have to continually issue orders. The battlefield is also covered with a “fog of war,” meaning that enemies won’t appear until a character has gone into the area, or at least close enough to attract the attention of enemies or traps that might be waiting. Playable characters will naturally faint if their HP drops to 0, but do get back up after a couple minutes and rejoin the fight. Weapons can be changed, items can be traded between party members, and ammo is not infinite. Characters will also level up and gain skill points to assign, allowing further customization than just equipping weapons.

On the downside, dialogue boxes could have been a little more prevalent and stationary, as they would move to the portrait of whoever was speaking, rather than just swapping out the portrait in a central dialogue box as most RPGs do. Additionally, some actions — such as splitting an item stack into smaller stacks — should have been pointed out, but were omitted. The current task list is very small and almost hidden in the bottom of the screen and some of the dialogue between the character and NPCs seems forced on occasion. Admittedly these are all minor problems. During my playthrough I had no major issues with loading times, crashing, or graphical tearing in any way. The game ran nice and smooth on ultra the whole way through.

Empyre provides an interesting world with captivating artwork, fantastic gameplay, and a storyline that kept me engaged the whole time.