I have a confession to make: I have not played a Shoot ‘Em Up in a very long time. In fact, I just recently found out that these days they are referred to as ‘Shmups,’ which I could have sworn was an expensive liqueur to indulge in after an evening of fine-dining. With that being said, whilst I have not recently played a Shmup, I certainly dumped a small fortune of quarters into this genre when I was younger. Reviewing Raiden V: Director’s Cut was a very nostalgic experience for me, allowing me to relive the glory of setting high scores, but it was also fresh and fast-paced enough to leave me with finger cramps after sitting down with it for several hours.

To give you an idea of what to expect in Raiden V: Director’s Cut, the official launch trailer serves as an excellent introduction. It only lasts a minute, so please have a quick peek and we shall continue after you are done watching.

Much like the trailer above, when you first fire up Raiden V: Director’s Cut you are greeted with a cinematic intro which is accompanied by the stellar soundtrack. The main menu also features its own unique music, which is a delightful blend of dramatic cello strokes and uplifting percussion notes. For me — and I am a self-confessed audiophile — the music throughout the game was phenomenal. The music was so good, in fact, that most of the time I found the accompanying narrative a nuisance.

The main menu offers the choices of: Story Mode – the main campaign, Boss Mission – try to set your best time on boss fights, Leader Board – see how you rack up against others, and the Gallery – view design sketches and in-game images. Whilst the PC options are fairly limited, you can naturally adjust audio levels and your desired resolution. It’s also worth noting that the game can be set to full-screen as you would expect, but also runs exceptionally well in windowed mode if you require.

Upon selecting Story Mode, the player is then presented with 6 different levels of difficulty: Practice (enemies do not fire at you), Very Easy, Easy, Normal, Hard, and Very Hard. Veterans of the series and Shmup fans alike should dive right into Hard or Very Hard, whereas Normal should be adequate for most players. Youngsters will probably appreciate the easier difficulty settings, whilst of course Practice mode will enable reviewers to play through the entire game without ever getting shot at.

The next important decision is your choice of fighter, of which Raiden V: Director’s Cut offers three: Azuma, Spirit of Dragon, and Moulin Rouge. Each fighter has different characteristics, Azuma is a good all-rounder for example, whilst Moulin Rouge is more mobile but less armoured. For my first playthrough, I opted to try the Spirit of Dragon, which is a little slower than the other two, but has the highest attack rating out of all three. Once the fighter was selected, there was just the matter of choosing weaponry preferences for the 3 archetypes: Vulcan Cannon, Laser, Plasma. This customization enables you to fine tune your fighter (area of effect versus focused damage) and allows for some interesting combinations to consider for two player co-operative play. 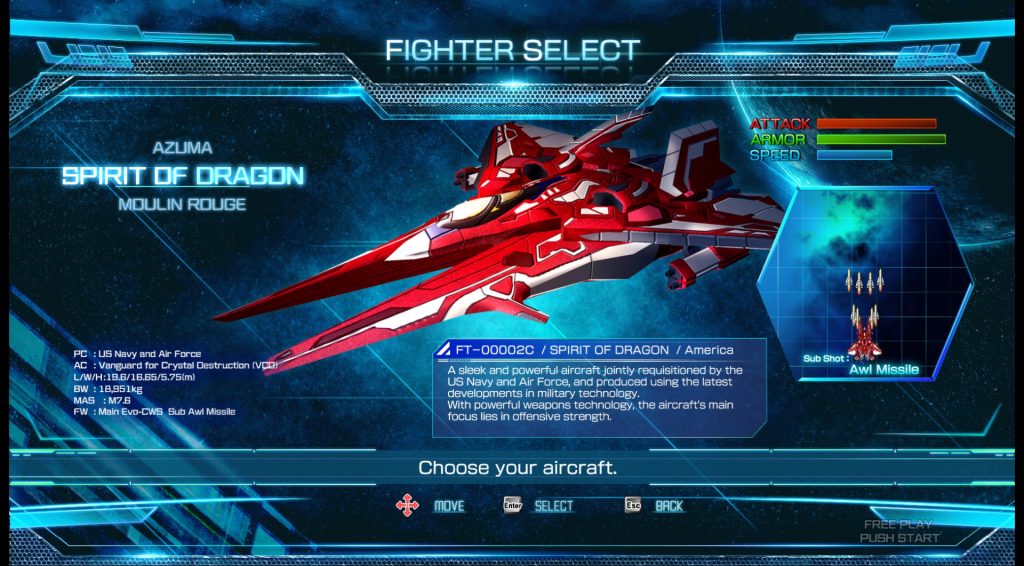 For my first playthrough I decided to use my keyboard rather than a controller, as I reckoned that a controller would only impede my lightning-fast fingers. The controls felt crisp and responsive, and owning a high-quality keyboard with anti-ghosting technology negated any possible input latency. With that being said, I plugged in a controller for my second playthrough and was pleasantly surprised at how responsive that experience was as well.

Once the action begins, Raiden V: Director’s Cut never lets up. The action is fast and furious, and it blends seamlessly into short cinematic transitions between stages. The game has certainly been given an HD makeover, and the upgraded visuals cement this title’s place as a new game rather than a ‘retro’ game. Whilst the presentation itself is a visible upgrade over previous titles in the series, I personally felt that the display was too ‘busy’ for me.

As the game is, in essence, a vertical-scrolling shooter, only 50% of the display’s real estate is required for the action. The remaining 50% (a quarter on each side) is taken up by marquee areas on the left and right. This is not to say that these areas do not serve a purpose, they contain vital information such as current shield status and the level of your weapon archetypes on the far bottom left. The remainder of the left area allows the player to cycle through in depth playthrough stats, as Raiden V: Director’s Cut integrates a real time score tracking system. For fans of the genre, I assume these features are welcomed by the ‘best of the best’ that continually strive to chase the leaderboards.

What about the right side you ask?

Most of the right side — aside from the questionable radar at the bottom — is dedicated to the newly added narrative (Raiden V: Director’s Cut is the first game in the series to feature voice acting). The upper-most area is the video feed of the characters that will incessantly chastise you for your poor performance as well as drive you crazy with the fully voiced ‘storyline’. After two playthroughs of the game, I still do not actually know what the plot was, although I do know that the main characters constantly wanted a cup of coffee.

Do not get me wrong, I have no doubt that there was a lot to it. I constantly caught in my periphery that the chat box on the right was a transcript of all the voice lines, but I was too busy trying to blast the enemies whilst avoiding the torrential rain of enemy fire to make any sense of it. Overall, I found the ‘fully-narrated storyline’ detracting from the phenomenal soundtrack that I mentioned earlier. This is where the game really shined for me. The accompanying score set the mood of the game perfectly and I can only assume that the narrative is intended to try to distract us, rather than add to the experience of the game itself. 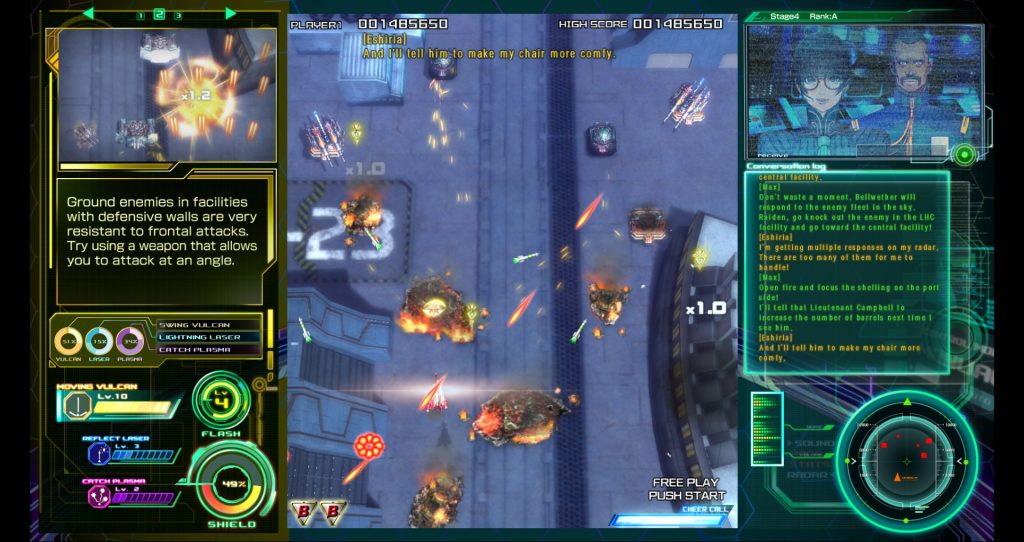 Despite my issues with the fully-voiced story (easily fixed by lowering the voice volume down), the gameplay itself is a well-crafted balance of challenging stages and epic boss battles. I found the normal difficulty setting to be the right fit for me, as I had not played a Shmup (this term is still making me chuckle) in a very long time. Whilst I had my fair share of deaths, I felt that each failure was my own fault rather than resorting to blaming collision detection or some other external factor. If anything, Raiden V: Director’s Cut implements several mechanics — such as the ‘cheer’ system — to help you succeed at the game. Between weapon power-ups, bombs which destroy everything on screen, and the ‘cheer call’ that is best described as an Ultimate Attack which has a duration based off how full your ‘cheer call’ bar is, there is never a dull moment in this game.

The only aspect I did not get the chance to experience first-hand is the local co-operative play, which looks like it would be a complete blast. The game is an enjoyable experience on your own, and of course you can make your mark via the online leaderboards, but I imagine that having a group of friends over for either co-op or trying to best each others’ scores would be even better. I think that was always the appeal of arcade games to me — the social experience. Having a group of friends around you and either cheering you on or berating your low scores would certainly be better than those two yahoos in the screenshot above.

Raiden V: Director’s Cut does an admirable job of keeping alive gaming’s longest-running Japanese arcade shooter series. There is enough familiarity to make returning to the series — in my case after 25 years! — a welcome experience, and enough new features such as the health bar (rather than lives) to keep fervent Shmup fans interested. The cost of entry — £30-£35 on this side of the Atlantic — has been brought up by several of my peers, and I have to agree that the price for most newcomers to the genre is slightly steep. When you factor in the replayability of the game — co-op, multiple difficulty settings (each with their own leaderboards), separate Boss Mission time trials — I feel confident that most die-hard Shmup’ers (yes I just made that up, let us see if we can get it to stick) will consider Raiden V: Director’s Cut a bargain.

Raiden V: Director’s Cut features stunning visuals and non-stop intense action that is masterfully partnered with a stellar soundtrack. Voice-acting? Not so stellar.