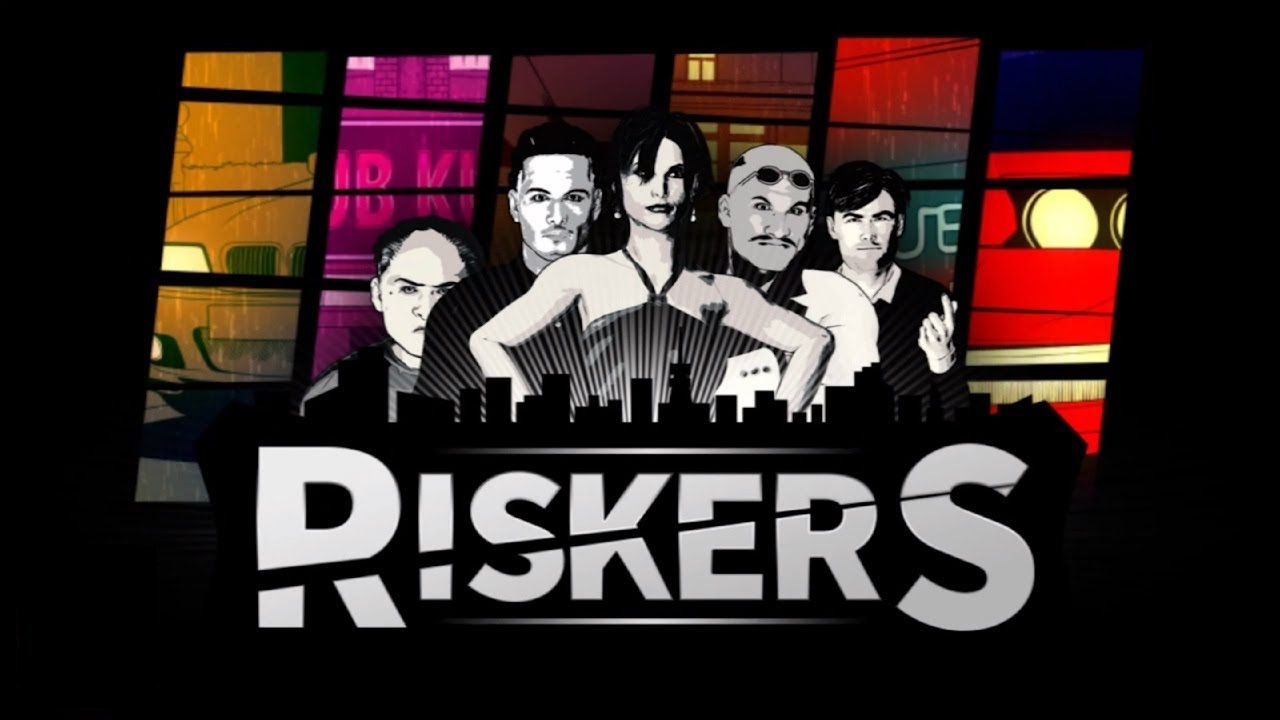 Riskers is a top-down shooter/adventure game that is very heavily inspired by early entries of the Grand Theft Auto series. Riskers takes place in a fictional city where you play as Rick Paradis, an ex-con who gets dragged back into the criminal underbelly after stumbling into a briefcase full of cash. The story revolves around Rick’s blood-lust after this case causes the demise of his brother; as far as plot goes, this game doesn’t offer much. This isn’t, however, the kind of game people typically play because they are compelled by the story.

Riskers gets you in and out of its tutorial in a flash. You learn how the basic keys function within 5 minutes and then you are off to the races, both figuratively and literally. Much like its inspirations, Riskers is divided into open-world exploration involving mayhem-causing, challenges, and side-missions, and isolated main area mission spaces.  Open-world exploration is fairly limited; the fun that comes out of mayhem and destruction is fairly mundane, with limited reactions from NPCs, police who are little more than a slight inconvenience, a fairly small non-interactive world, and a limited sense of destruction as everything from bushes to stop lights bring your car to a sudden stop. 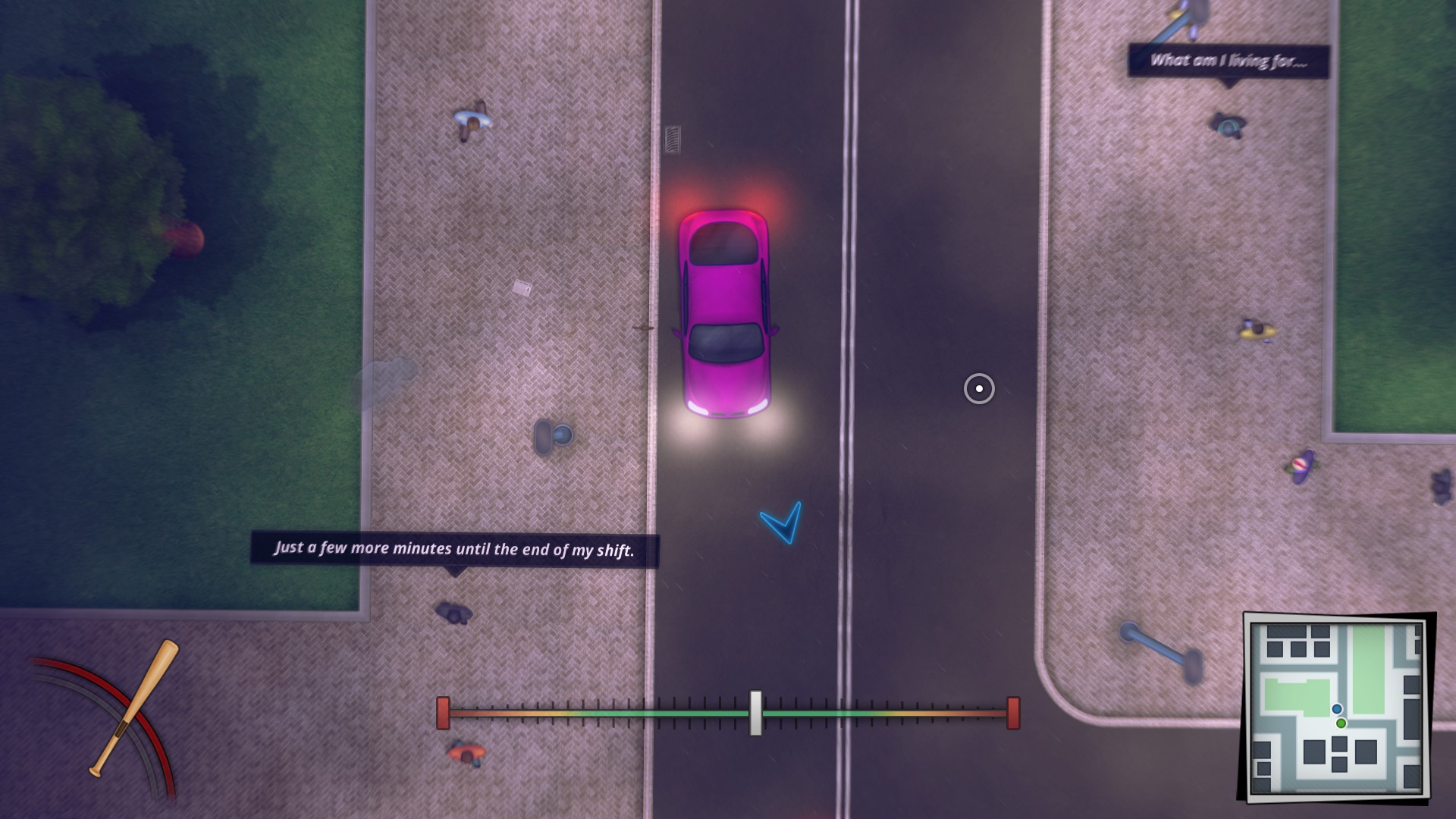 Riskers has disappointingly limited customization options, which really hinders the player’s ability to optimize their play style (my biggest frustration came from the inability to assign “sprinting” to the right mouse button). Having sprint bound to the keyboard made for frustrating moments where I would run into walls trying to quickly and quietly take someone out. This hang-up is in part because the right mouse button is permanently locked to panning the camera, a feature which feels more like it should belong to shift key, if not an automatic feature for pushing the screen boundaries with the mouse.

The game brings a variety of weapons to your arsenal, but while you can walk about with the weapons you get after completing a mission, beginning a new mission starts you off fresh with your fists and a baseball bat; a mechanism I found odd and out-of-place. Am I just dropping my arsenal off in the nearest dumpster before I walk inside a mob-boss’s main base? It would seem that this is an intentional design choice, but it again makes the open-world exploration feel less valuable as you are unable to farm weapons to improve your ability to destroy.

Each weapon has a different feel as well, giving a general sense of satisfaction as you progress on to bigger and heavier guns. The way that weapons handle doesn’t always pan out as anticipated, however.  My first encounter with a sniper rifle went from gleefully excited over the prospect of being able to head shot an unsuspecting target to frantically switching guns to take out the swarm of enemies I had triggered, including my target, who apparently transforms into someone from The Matrix and can dodge bullets aimed directly at his skull. An easier alternative was to simply use the hand gun to snipe targets at the edge of my screen; they often didn’t notice the gun being fired and would just suddenly cease to be alive. This detracts from the excitement of accessing the best equipment, making progressing through the thin story more of a chore than a journey.

The AI is also relentless. Once an enemy is triggered, they know exactly where you are. No matter how many walls you put between you, they hunt you down like heat-seeking missiles. While their relentless pursuit was frustrating as they seemed to go from oblivious to all-knowing in a heartbeat, it was also fairly easy to manipulate. NPCs generally followed the same path and, with the few seconds you had before each fire fight, you could plan where you wanted enemies to wind up (usually in a doorway). 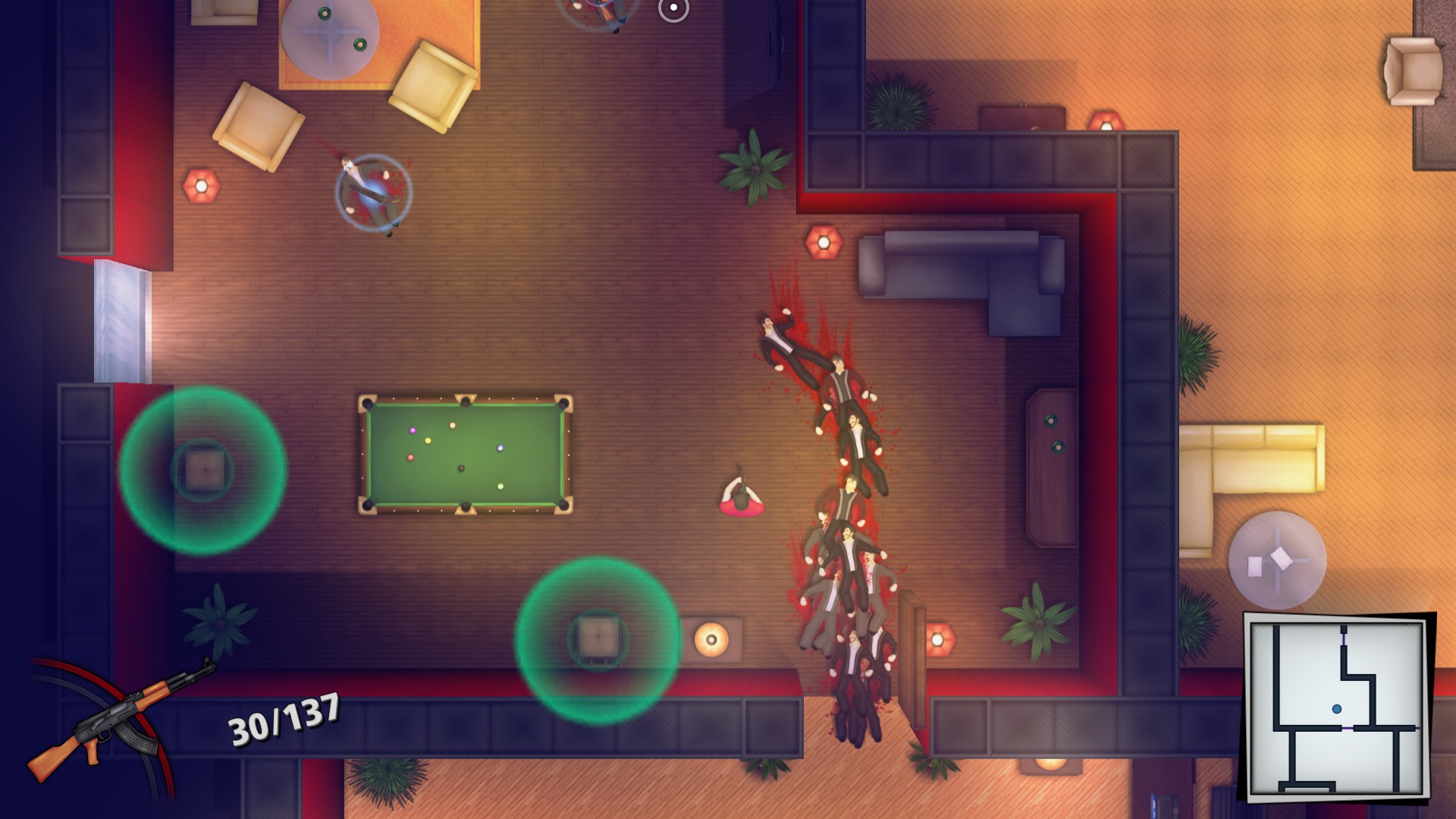 NPCs also benefit from unlimited ammunition and never need to reload, which makes for weird situations where a sniper may just post up and shoot at you (even going so far as to try to shoot you through walls) from one spot until he gets lucky and you poke your head around a wall into the line of fire.

Non-combatant NPCs are used fairly effectively as an extra element of chaos in the game. Unfortunately, this chaos is dampened by how unafraid they seem. Firing a gun triggers them to run for a split second as if they’re panicking, but they quickly return to doing whatever they were up to beforehand, spouting out speech bubbles as if the gun shot(s) never happened.

Riskers uses a pretty interesting sound mechanism to trigger enemy NPCs. Sound from guns triggers enemies to engage, forcing the player to be aware of their weapon of choice as well as their position. It also, however, displays the game’s own limitations as enemies on the other side of thick walls can be triggered more easily than enemies in the same room, which limits one’s ability to suspend disbelief. I have a hard time understanding how an enemy could stand beside his freshly killed comrade, unaware of the threat, while another comrade is going to sprint through an entire building to get to you. 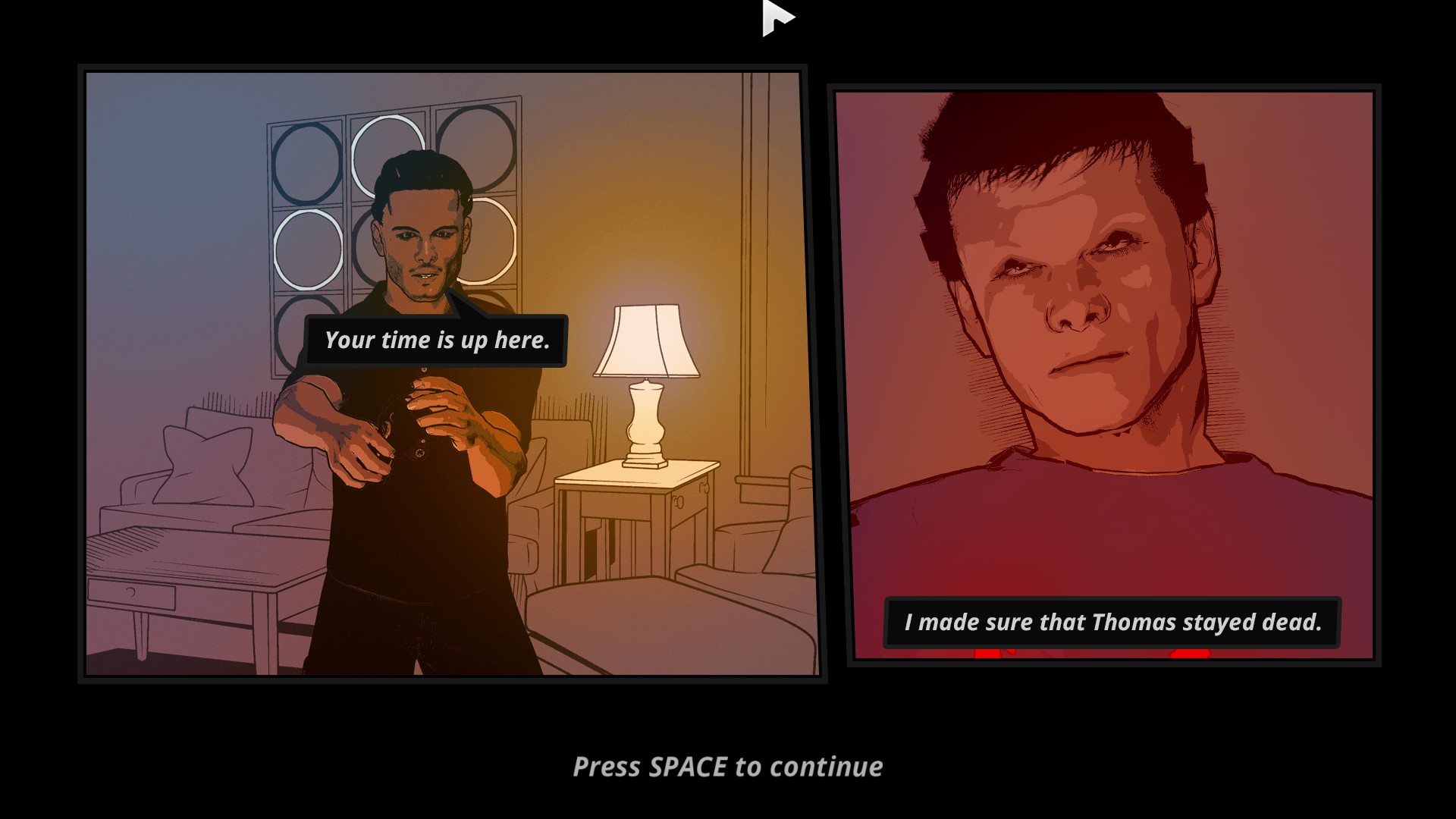 I also noticed that doors play an incredibly limited function in this game. When they are closed, they cut off sight-lines, making you impossible to be seen. When they are open, they serve as a great kill boxes, as enemies line up to die trying to walk through them, but that’s about it. You can open a door, as can your enemies, but that’s it — there is no closing them. It seems almost a waste to program them in to just act as one-time gates. This decision makes sense given that when an enemy hears you they know where you are forever, but it seems wasteful and only further demonstrates the limitations this game has.

Riskers’ OST is composed primarily of a series of short electronic house songs that repeat until the setting changes. The game’s audio is mixed quite well, and the music, though a bit repetitive, complements the gameplay and environments. Gunfire is mixed well, and appears to be environmentally-dependent. I assume shooting up a night club would normally kill the music, but if for some strange reason it didn’t, the music drowns out the guns just a touch, making you feel as if you are actually there.

Aesthetically, Riskers is a pleasing game. Top-down gaming does create limitations on what character models look like (people are pretty boring when looked at from above), but ShotX studio does a good job with exciting backgrounds (read: floors). Having many of the missions take place in nightclubs or other similar venues was a great way to develop exciting and engaging backgrounds with bright lights, shapes, and coulours. The comic-style cutscenes are also well done. They do feel shoe-horned in as a crutch to develop a sense of plot, but the artwork is detailed and interesting. The double image flickering back and forth though is a little frustrating to look at and I personally could have done without it.

Overall, Riskers is a fairly interesting game. It is a mix of great potential and strange design choices. If you are looking for a game that scratches a nostalgic itch for Grand Theft Auto, you are certainly looking in the right place. The biggest drawback to this game would be how frustratingly simple enemy NPC interactions with you are.

While the gameplay is fun in small doses, lots of strange programming choices and a thin, lackluster story hold back this game from being a must-have in your library.