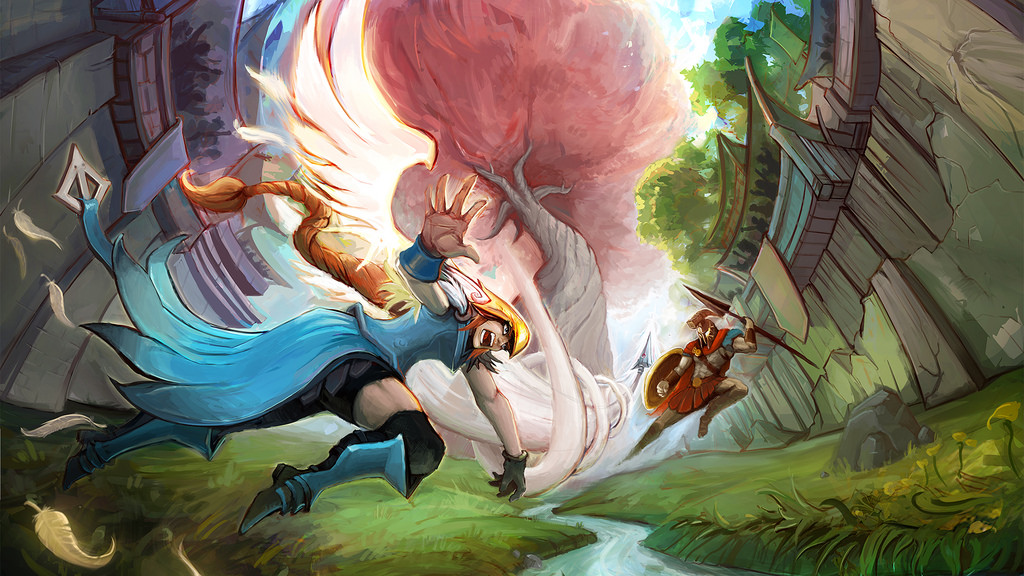 I was really excited going into Strikers Edge; the concept is one that instantly gripped me by my historical collar and gave me a shake. Mythological figures from eight different cultures and various eras coming together to pummel one another with dodgeballs? Please give it to me now. On the surface, this sounds like a fantastic concept for a game, but the core package is ultimately hindered by online connectivity issues and a lack of differentiation between the playable characters.

The problem is that when it comes to actual implementation, Strikers Edge falls far short of its aim, combining somewhat lackluster controls with what can only be classified as a seriously broken matchmaking system.  Initially I was playing during the pre-release phase so I had assumed that my inability to connect to another living player was related to the fact that it was only other reviewers and people who had early access who the servers were trying to match me with. Part of the reason this review is being published two weeks after the game’s official release on PlayStation 4 was so that I would be able to wait for the influx of players after January 30th, but even after this time it seems like there has been no change to my matchmaking issues. 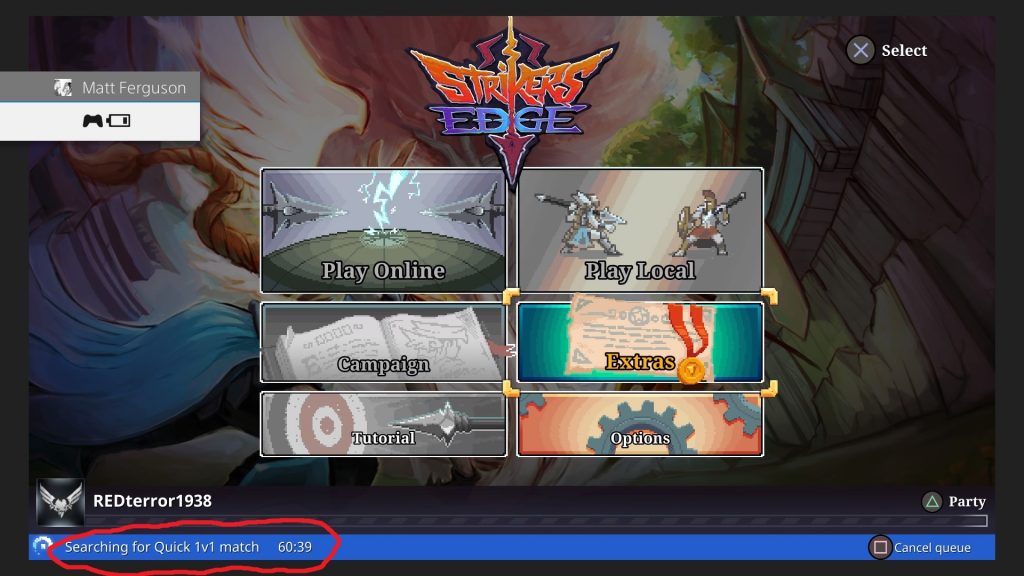 In Strikers Edge you take control of one of eight characters, each with their own special attacks that help them to turn the tide of battle in their favor. The controls are relatively simple, but that doesn’t mean that taking down your opponent will be. You have a stamina bar that you need to be constantly monitoring, because dodging and attacking drains stamina and an empty bar can leave you exposed without the ability to avoid an attack or respond with one of your own. Each character has a basic attack, a charged attack, and a special ability, and are of course confined to one half of the dodgeball court as you try to hurl an array of projectiles towards your foe. Actually aiming your attacks takes a little bit of getting used to, and exercising expert control over the joystick was ultimately key to each victory. I can only assume this would be one aspect of the game that would be easier to control on PC.

While each character has their own unique weapon, the basic attacks function the same way regardless of who you are playing as. Eir’s spear functions in the same way as Urgul’s axes, at least until someone decides to unleash a combo attack, combining a charged regular attack along with each character’s unique power. This is where you can see the differentiation between each character; and where you’ll find the one that best suits your play style. Your charge attack has a special secondary effect in addition to dealing extra damage. The character I chose to use most often was Haru the Ninja, whose special ability allowed me to hurl a throwing dagger across the battlefield, which would stick in the opponent’s back wall (or their face if your aim is true). Once the dagger found a target, I could activate my special ability which teleported me to the dagger and back to my side of the arena, doing damage if you crossed paths with the opponent or if the dagger had found its mark.

Perhaps my favorite aspect of gameplay is that the game would slow down to a crawl whenever one player was about to get hit by a game-ending strike, giving you just enough time to dodge the imminent death or perform a block if you were able to. It’s a small feature, but one that turns the end of every match into some of the most tense gameplay in Strikers Edge. One of my online matches, both my opponent and I had each other down to a sliver of health, and were able to continuously dodge one another’s attacks by paying close attention to each others’ movement and taking advantage of this life-saving mechanics. 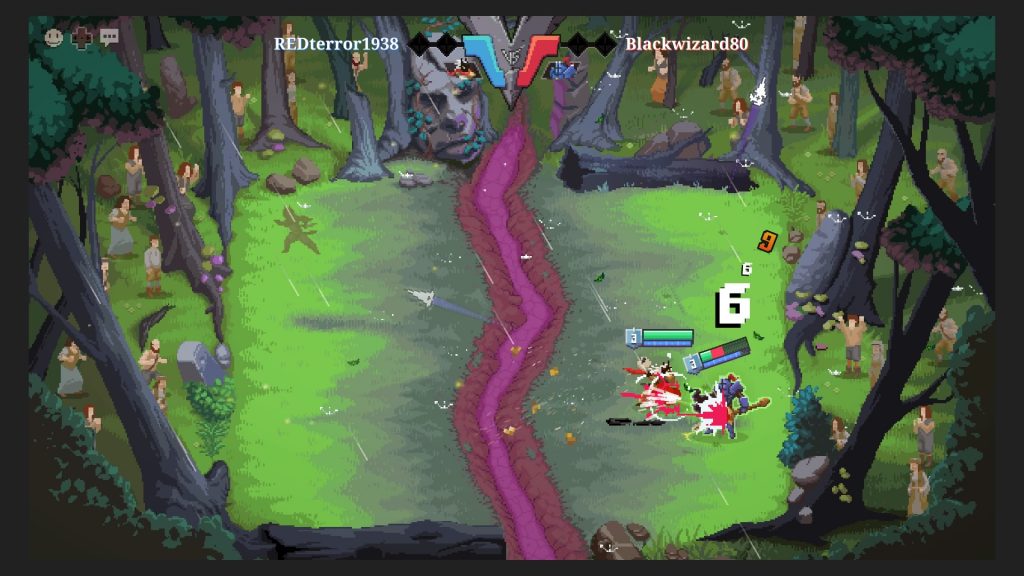 The various special moves are well implemented on the dodgeball battlefield, and its the one aspect of character control that feels genuinely unique between each hero. Other than the specific way that characters’ charge attacks worked alongside their special abilities, there are really no other distinctions between them such as speed, strength, or any other core statistics. This does make for a more even type of gameplay, but it also means that in my largely solo venture into Strikers Edge gameplay started to feel a little monotonous. Initially I would sit in the queue for 5-10 minutes before restarting the Quick Match search several times, and then ultimately giving up and resuming campaign with one of the eight characters. The campaign mode is fun, but simply a series of matches against AI opponents interspersed with a small amount of dialogue (with no real overarching story). It did serve as the best arena to test my mettle with each fighter however, before ultimately landing on Haru as my warrior of choice. 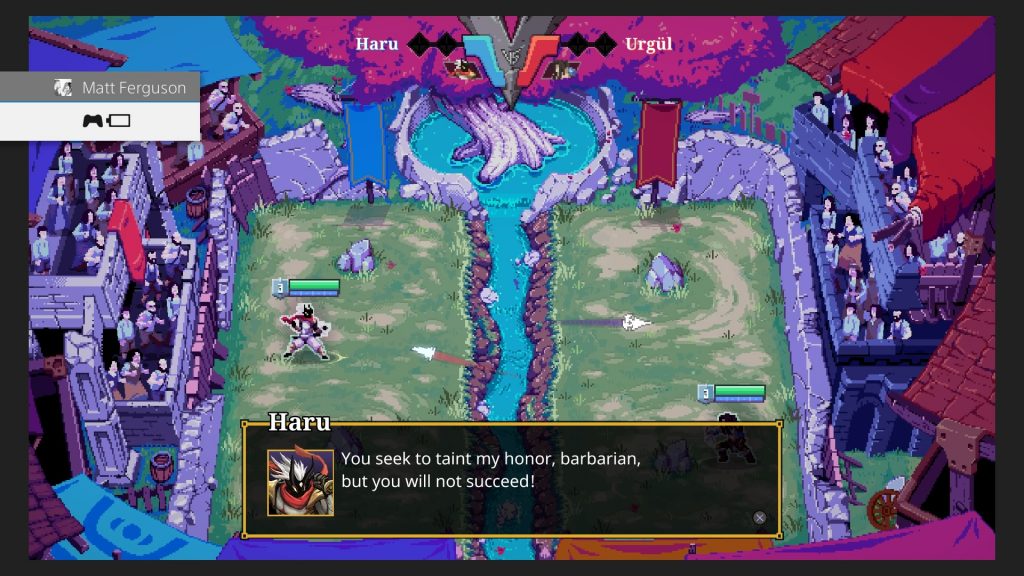 After the game launched publicly I sat in queues for upwards of 15 minutes — my longest was just over an hour, just to test it — and was occasionally able to connect to a player, but matchmaking success overall was very sporadic. The problem, aside from the ultimate fact that AI in this type of purely just doesn’t provide a sustained entertaining challenge, is that without a properly functional multiplayer Strikers Edge has a vastly reduced shelf life, and one which I’d have a hard time recommending someone spend the $15 US/$20 CAD on.

That being said, the few matches that I was able to play online were a blast. It really proved that the game is meant to be experienced with other people, and my handful of one vs. one matches and the several two vs. two match I was able to get in online were engaging and fast-paced. Not only that, but for a game that is suffering from some pretty bad connection issues, the multiplayer functioned without a hitch when I was able to get into a game. 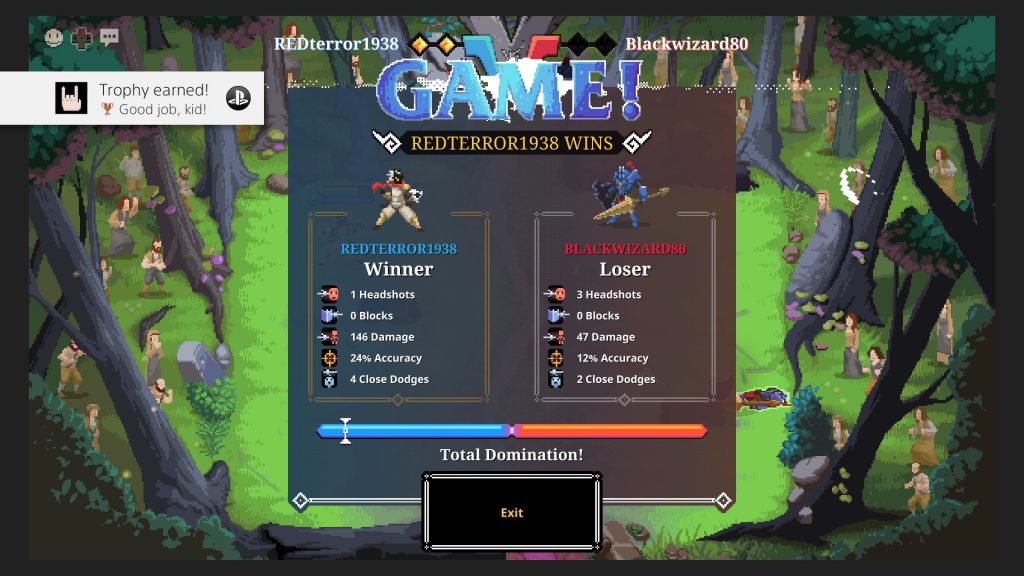 Your other option is to play Local co-op with a couch-mate, which is not a bad option if you have someone with you who is willing to engage in dodgeball mayhem. Luckily I had recently picked up a second PS4 controller, or I would not have been able to try this option. The other hurdle was enticing my wife to play a few matches against me, but even after several games of one vs. one it was clear that Strikers Edge was just as much fun playing with someone locally as it was online. With the connectivity issues of the online matchmaking, local play is something that definitely saves Strikers Edge from laying face-down on the cool gymnasium floor. Not only that, but generally it’s a feature that’s been categorically missing from many titles in recent history, and the format does serve wonderfully as a party game. That being said, at a point, you just want to take it online and see how you stack up against the rest of the pantheon.

It’s a shame, because with a fully functional online multiplayer Strikers Edge would be a really solid package. While the characters don’t have anything differentiating their combat styles apart from their combo charge/special attacks, there is enough to give each of the eight characters their own meta play style in battle. Combined with a solid local co-op offering, Strikers Edge is an entertaining game to play in bursts which will be helped immensely by fixing the multiplayer connectivity issues. 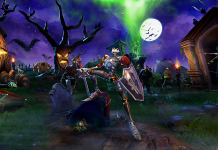