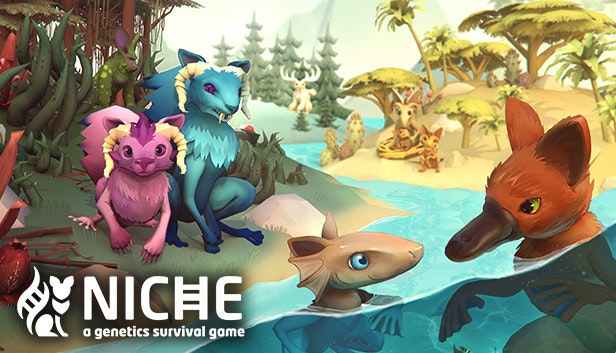 Strange and specific simulations and strategy games have always appealed to me. When Niche – a genetics survival game popped up on my Steam suggestions, I was instantly drawn to it. Screenshots of weirdly cute animals in a variety of settings were a good start, but it was the premise of Mendelian genetics being the key to survival that truly caught my attention. For all of my other pursuits, science has always been my first love, with a soft-spot for biology. A chance to play through a dramatized version of evolution in action was too good to pass up.

Niche – a genetics survival game is the product of a very successful Kickstarter campaign, raising an impressive $72,375 USD out of their $15,000 goal. With all of their stretch goals being met and then some, Niche showed promise to be a full and expansive game. Additions included different biomes, leading to related genes and mechanics. Swimming, hybrids, and even a rare chance at flight were added in, creating a genetic playground for players to make their way through. With a tile-based map and turn-based gameplay, Niche turns survival into a strategy/management game.

While there are two game modes, the basis of Niche is user-controlled adaptation to changing environments. Story mode starts you with Adam and Eve, with the eventual goal of having your happy hoard thrive while you travel from island to island, using flowered ports to make your way back to Adam’s home island. Each new island and environment presents its own new set of challenges. Sandbox mode allows you to pick what type of islands you start with, with the goal being whatever you wish to explore within the confines of the game. It is a chaotic sort of control. Things can, and will, go wrong. 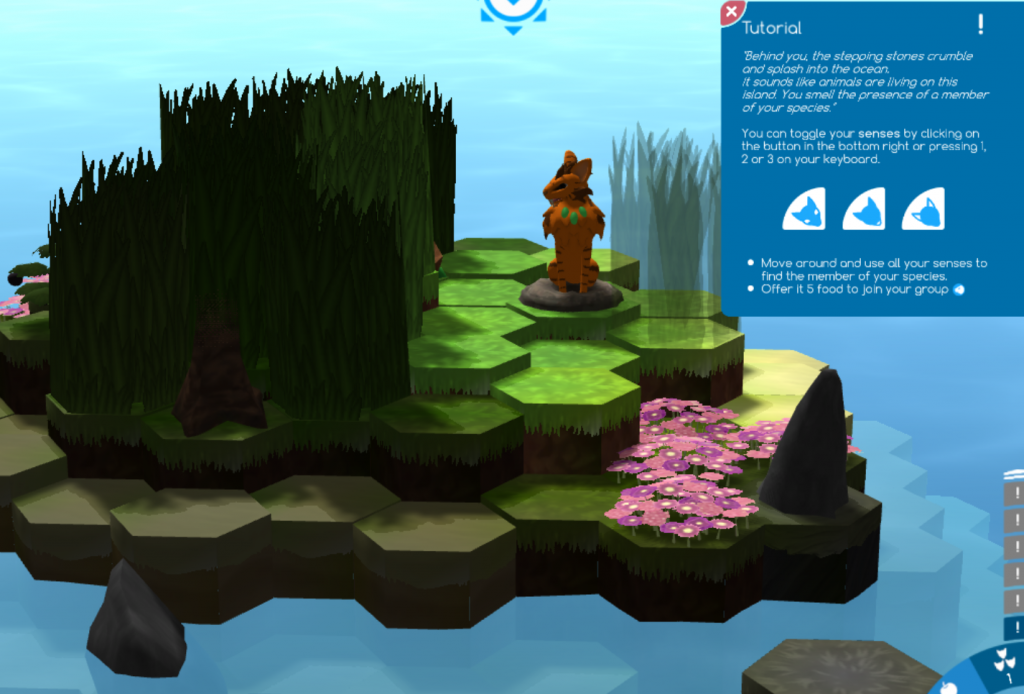 Adam and Eve are the first two creatures the players get to control during their journey through the islands. If you’re not careful, they could also be your last. ‘Nichelings’ are the creatures you control, which look like some sort of fox-cat hybrid that can be bred to have horns, patterns, even wings. When playing story mode, Adam’s genetics are always the same. Eve — and every other wild nicheling you encounter — are randomly generated. These creatures can be mated to grow the population, with the player selecting two genes per nicheling to breed (more on that below). As nichelings grow up, age, and then die, the player has to keep a diverse and large enough pack to sustain them through whatever hazards may pop up.

Each nicheling can have a maximum of three actions per day; newborns having none and gain one per tier of age. The effectiveness of these actions are based on the stats of each creature. A creature with a high speed stat can cover more tiles per action than one with a low stat. Some actions will fail if the nicheling does not have a high enough skill, such as cracking a shell or digging for food. Skills are just as important to breed for, with certain genes boosting and/or hindering necessary skills. Trying to keep everyone healthy and fed is challenge enough; trying to maintain a viable, sustainable population that will not collapse adds a whole new level of tension to Niche.

Each of these animals interacts with the world around it, and this game includes risks to those actions. An aspect of Niche that I really appreciated was the dynamic environment and how it can undermine a player’s plans. The day/night cycle that resets actions for your nichelings can be triggered at any time, allowing for players to let their creatures age without moving them or to skip ahead until prey makes itself apparent. Other creatures on the island move independent of the player, including prey animals  and predators alike. Nichelings can be harmed by going about their normal activities or trying to progress across an island. Swimming can lead to leeches attaching themselves to your nichelings, and clearing away thorns can lead to scratches. Both of these environmental hazards cause bleeding damage, which can be cured by having one nicheling lick another. This introduces another dynamic of the game that I really enjoyed – having nichelings help each other, along with there being benefits to having a large pack. Having a large and diverse pack allows for protection against cold, sickness, even starvation if there is a need to have gatherers spread across an island. 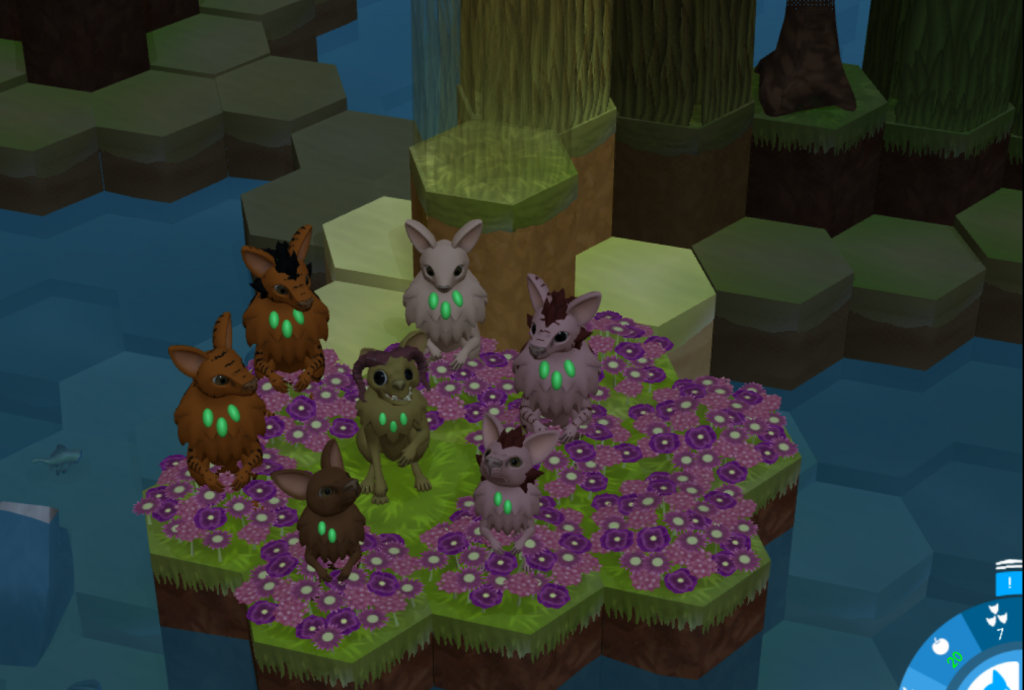 The genes system has a rather steep learning curve, with players being introduced to the basics of the system before there is an apparent need to start conditioning for certain traits. In fact, it’s possible to forget about the genetic aspect of this game all together. Seeing as it is a genetic survival game, that’s a problem. If you start out the game selectively breeding for traits that would help the longevity and quality of life of your nichelings, Niche begins to feel like a management game. Every time a new nicheling is born (and any time thereafter), players have the ability to decide which two traits they want that creature to have a 50/50 chance of passing on to the next generation. Players have to hope they find enough wild nichelings to keep the gene pool from stagnating, because inbreeding can lead to a community with the same immunity genes. This is made more difficult by rogue males that wander around the game, whose undesirable genes could be bred without the player’s intent. Should a sickness roll through the pack, everyone would be affected. I think the game would benefit from more explanation as to how the system works – learn how to unlock the desired genes, how the mutations work, and an explanation of the immunity genes aside from the general warning against inbreeding.

Overall, I think Niche – a genetic survival game is a fun experience in management of resources, short-lived creatures, and exploration, featuring a wealth of islands and scenarios to explore, including bluebirds that like to feast on nichelings. The genetic component could use more explanation, perhaps while the player is exploring which genes to pick. There is a really good balance between simplistic aspects for a game that tackles complex mechanics; it is not overwhelming or underwhelming in the gameplay. It’s fun, with just enough pressure on the player to want to strive for survival.

Niche provides a full game that explores a biological, population-based form of survival. Though it lacks in-depth explanation to push the genetic mechanic, it creates a fun world to explore and survive.

The review copy of this game was a digital code provided by the developer.

My Time at Portia Review 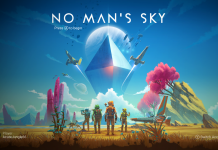