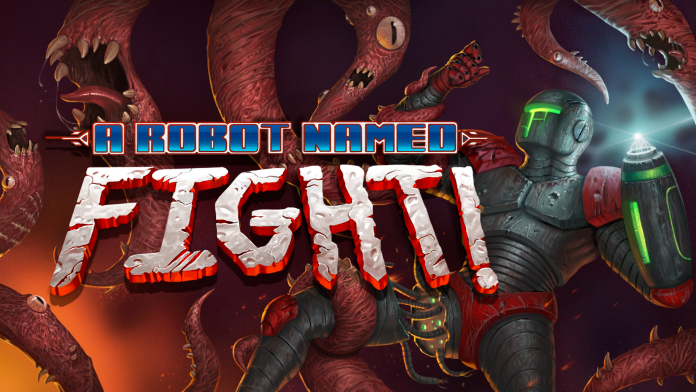 A Robot Named Fight is a mixed bag. On the one hand, it’s probably the closest thing we’ll ever get to Super Metroid on PC, and that is simply fantastic. On the other hand, it has a few problems that hinder it from being truly a truly great Metroidvania. While it is no doubt enjoyable, some of the game’s design choices left me scratching my head just a little.

It’s extremely important to note though that A Robot Named Fight was developed entirely by one person, which is not something we see near as much of nowadays in game development, and it is really a testament to the dedication and hard work of Matt Bitner.

Focusing on exploration and item collecting, A Robot Named Fight is an indie action platformer with rogue-like elements. Every time you play you are greeted with an entirely new procedurally generated map, with random enemies, and random items hidden throughout. This ensures that you have a fresh-feeling run every time you start the game. 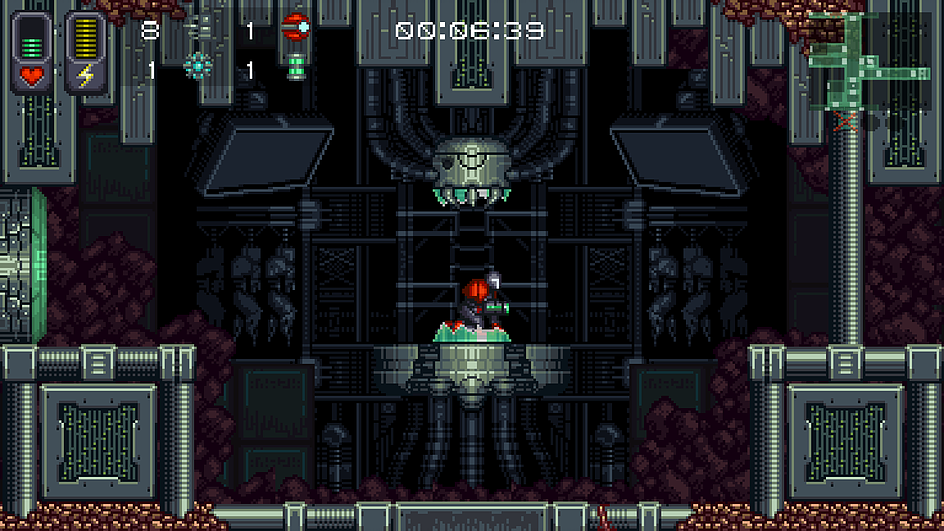 The first thing most anyone will notice about this game is that is borrows heavily from games like Super Metroid, Contra, and Mega Man. Especially Super Metroid, as the overall aesthetic is very, very similar in many aspects. This isn’t necessarily a bad thing, or meant to criticize A Robot Named Fight. It actually works really well for the game’s setting: a seemingly post-apocalyptic robot city that’s being attacked and/or consumed by meat monsters. Gruesome, to say the least, but it’s very interesting, and reminiscent of some of the environments from Super Metroid.

As you guide your robot deeper and deeper underground, you’ll collect power-ups and various items to help you in your journey. Your ultimate goal: Defeat the Megabeast. And what is the MegaBeast, you may be wondering? It is more or less the biggest baddie of the meat monsters, and will take every ounce of skill and every power-up you can muster to take down. 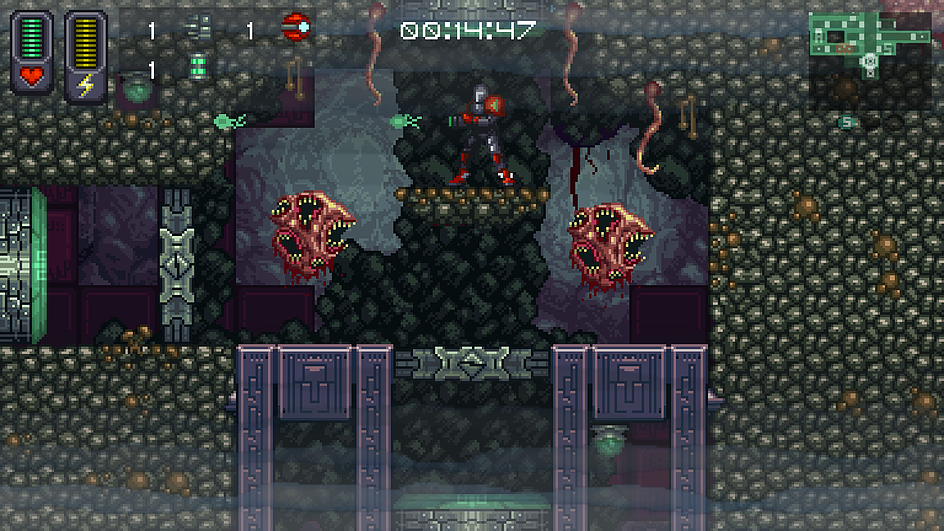 Players have a few options to aid them in their journey. Your robot is armed with an arm blaster/cannon that can blow away most anything. As you fight your way through the underground, you’ll find upgrades that change how your blaster works and behaves. For example, you may find the Electric Shot upgrade, which gives your shots an Electric element and additionally allows your shots to be charged. This particular shot upgrade also allows you to open certain doors. Another upgrade changes your shots to explosive blasts that deal added damage, and yet another adds fire which deals additional burning damage over time. Choosing which of these upgrades to arm yourself with is key to both the survival, and enjoyment, in A Robot Named Fight.

As you defeat enemies, you’ll begin collecting Chips. These can be used to get upgrades from shrines you may find … albeit a little randomly. Each shrine has a secret number, and depending on how many chips you donate to it, you may end up with a vastly more powerful upgrade. You’ll also acquire two different colored Scraps, which can be used by Smith NPCs to build other upgrades or bots that follow you around and do various things. For example, one of the bots is an orb that floats around with you and provides light. While this may seem like a very minor upgrade, these bots are beneficial during certain parts of the game; the light bot is recommended for especially dark areas, making them MUCH easier to traverse. 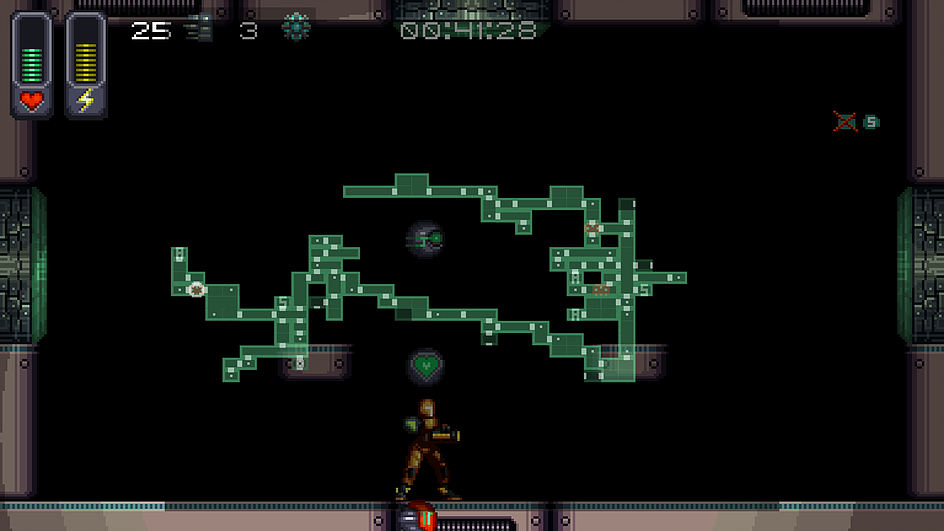 As you complete certain milestones — such as defeating numbers of enemies — you’ll unlock new power-ups that will start appearing in subsequent playthroughs. This progression is key, as you will find that certain upgrades are way more powerful than others, and therefore more desirable in the long run. This feature also adds additional reply value to the game, allowing you to pick up after a defeat with a new arsenal of power-ups to re-enter the fray with.

While for the most part A Robot Named Fight functions without a hitch, there are some areas that could use improvement. As you explore the underground city, you’ll be covering a LOT of ground. Typically in these types of games you’ll find fast travel/warp points that allow you to go between specific areas, making backtracking less of a chore. This concept is currently non-existent in A Robot Named Fight, but would be great to see from a future patch.

Another small thing is that the jumping physics are a little finicky in certain environments and could use some work. The way jumping currently works can cause problems in specifically-designed rooms or layouts, especially the jumping/platformer puzzles that have spike traps around them. No matter what you do, you’ll almost always hit the spikes in such a situation, and it feels rather unfair and unnecessarily frustrating; just like the system could use a little tweaking. 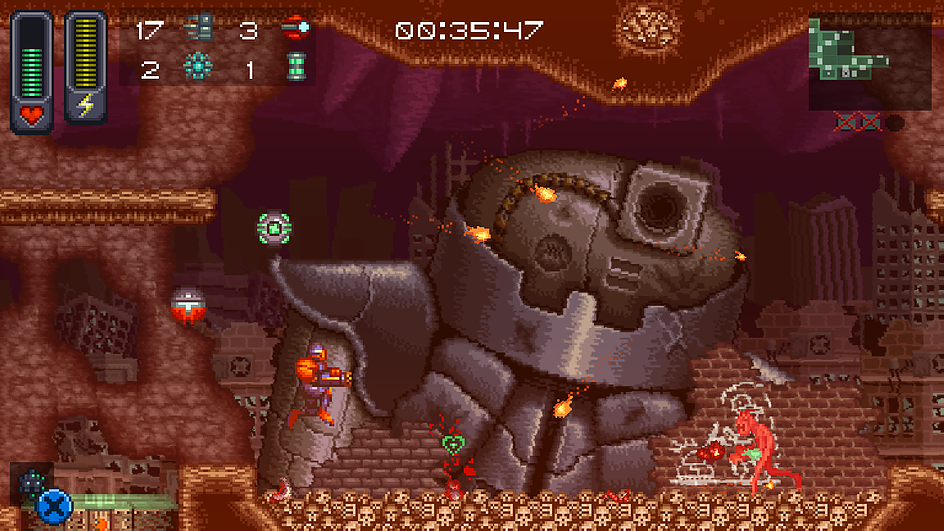 I can say without reservation that A Robot Named Fight is well worth giving a shot, especially if you are a fan of the Metroidvania genre. The core gameplay elicits that nostalgia for classics like Super Metroid and Contra, with the addition of the procedurally generated elements which keep you coming back for more.

There are many games out there which aim to borrow from the Metroidvania genre without adding anything to it, or managing to evoke that feeling of nostalgia that I got when I played A Robot Named Fight. It’s the successful balance of classic style and gameplay with the more innovative features that didn’t exist in the 90s, which creates the right balance and a thoroughly enjoyable gameplay experience.

Run, gun, jump, and platform your way through the robot city to defeat the meat monster menace. Collect power-ups to augment your abilities as you explore this rogue-like Metroidvania experience.

Slay the Spire Review: A Beautiful Combination of Genres