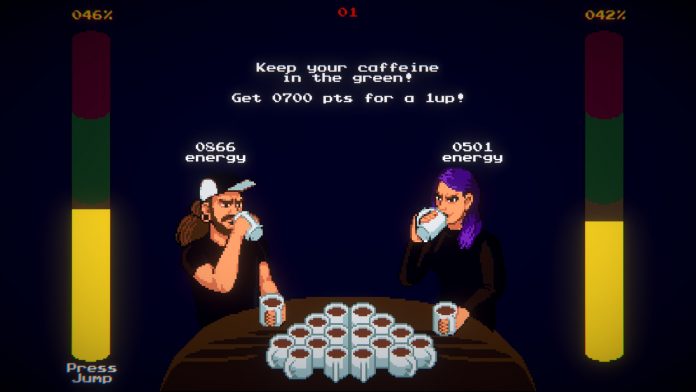 I loved old school beat ’em ups on the Sega Genesis as a kid — particularly the Streets of Rage series — so when given a chance to play a game that originally released on the Sega Genesis, I had to say yes. Kickstarted in 2016 and released on Sega Genesis in 2017, Coffee Crisis has finally arrived on PC. The brawler throws it back in full retro style with a unique combination of coffee, metal music, and aliens. The story focuses on two baristas — Nick and Ashley — of Black Forge Coffee House (a real business in Pennsylvania) who have to try to stop aliens who are invading from stealing the world’s WiFi and music; especially metal. 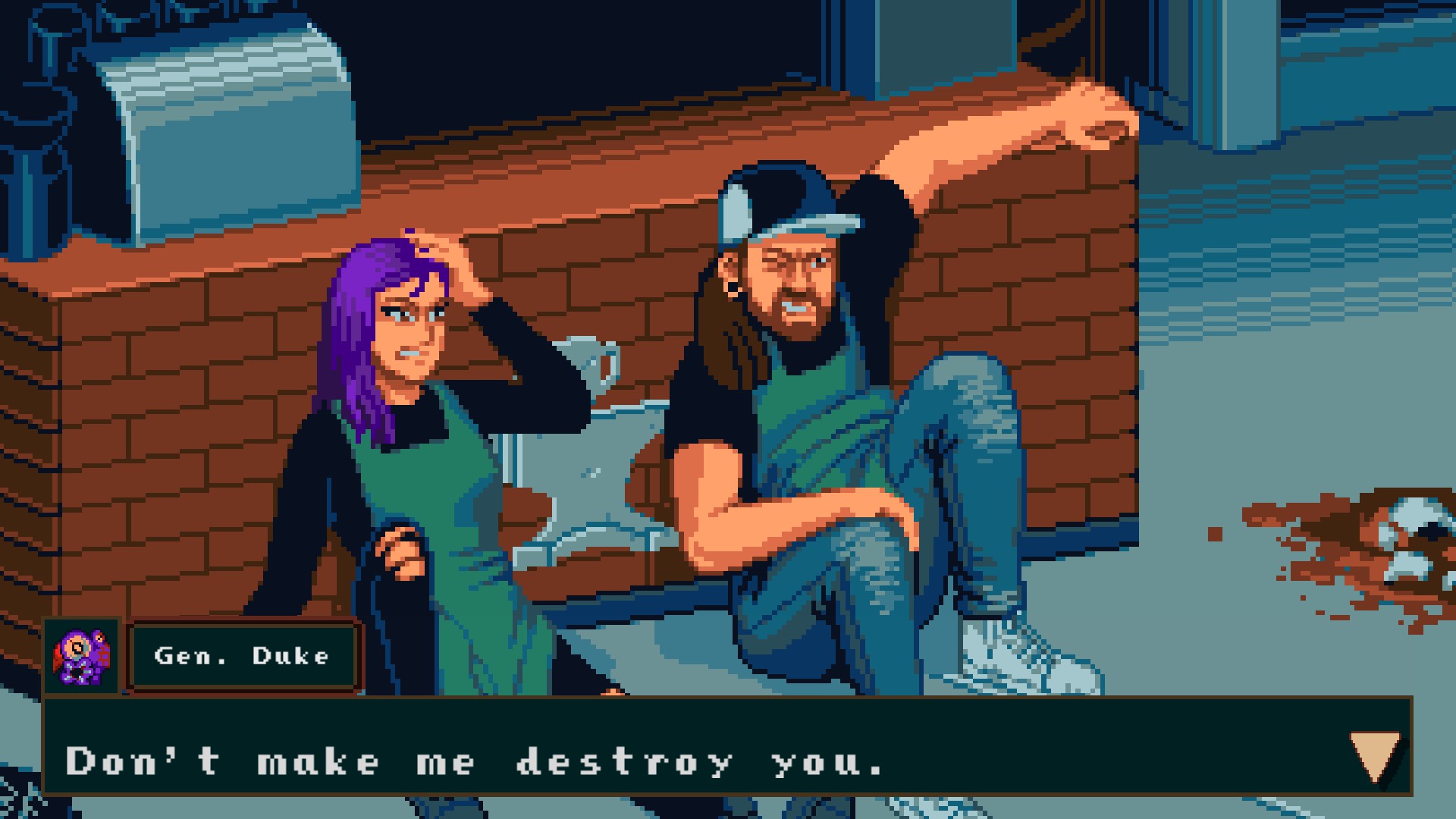 To stop the alien theft you get to choose between playing as Nick or Ashley to take on the aliens, or you can bring along a friend for some local co-op like many of us enjoyed in our youth. Nick fights with a bag of coffee beans, while Ashley wields a coffee pot. You have basic, strong, and special attacks at your disposal to help take on the aliens, as well as your quintessential jump and grab attacks. You can also find weapon pickups to help deal a little more damage for a limited number of uses. I had small issues with weapons, as often it looked like I make contact but the enemy didn’t take any actual damage, possibly caused by issues with collision coding. It wasn’t often enough that it was game breaking, but it was annoying when it did happen.

Most of the time I relied on the core basic and special attacks to defeat enemies. I found the stronger charge attacks a lot of the time weren’t worth the risk using them when it came to normal minions. They definitely become more useful during the boss fights, but then again the majority of boss fights are pretty straight forward and never too difficult. The real challenge comes in the various stops on stages where you have to fight numerous minions at once. The enemy types are so varied at times that you are constantly strategizing on how to manoeuvre around the various move sets thrown at you. 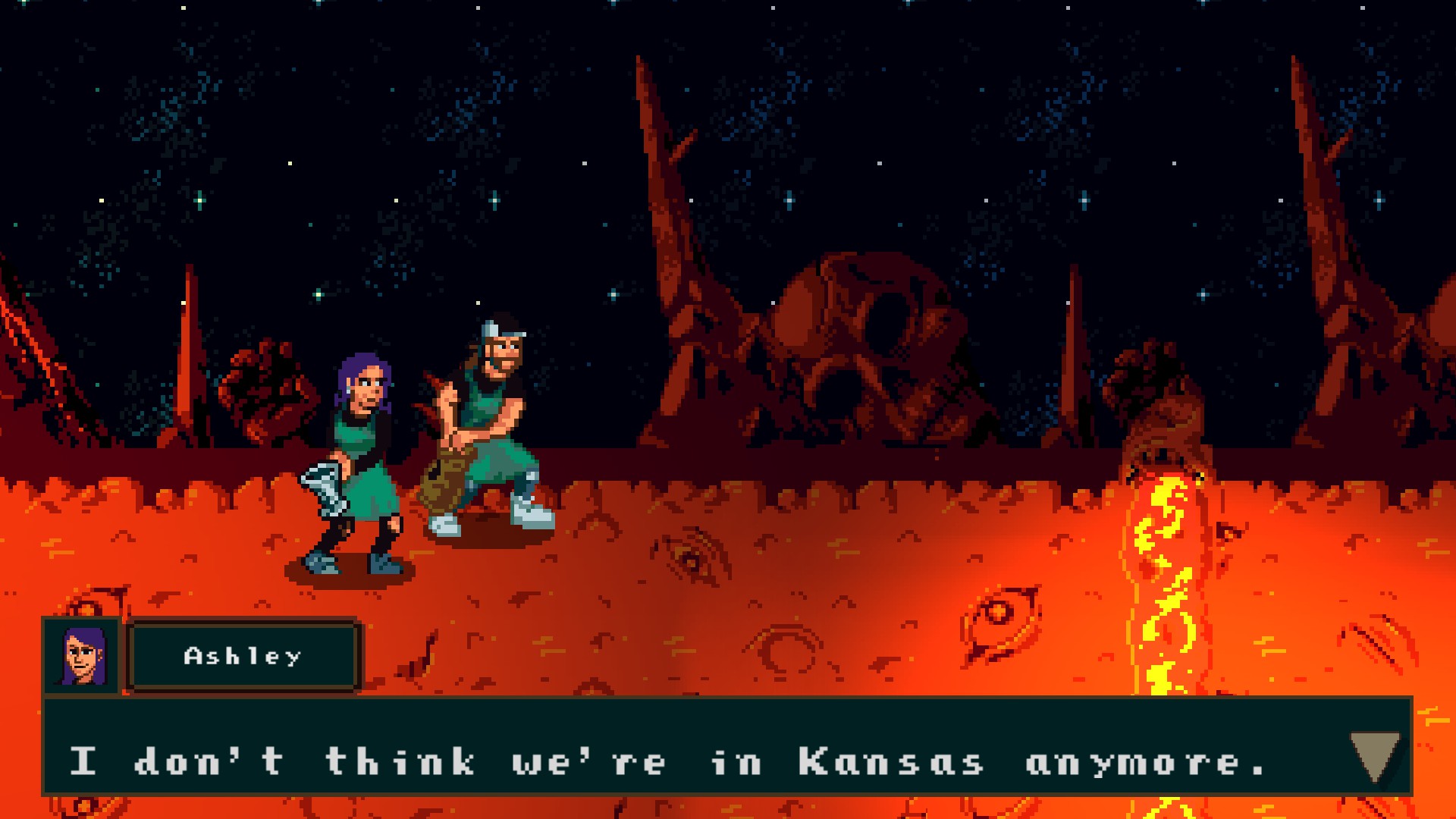 What kind of old school brawler would Coffee Crisis be without some power-ups? You definitely won’t be disappointed here. Not only are there power-ups like Invincibility and Multi-Damage, but when you collect the power ups the game’s music also powers up. A huge metal rock riff starts playing, helping you to feel like even more of a badass. If power-ups are not enough to get your blood pumping, you can throw on modifiers and make the game more randomized, as well as altering the difficulty. Sometimes the enemies on-screen would just all die, other times there would be two or three times as many, and sometimes a crazy visual effect to throw you off your game completely. Suffice it to say, modifiers mixed up the gameplay substantially.

After playing through with both characters, I feel Nick is the easier of the two when it comes down to the combat. Ashley feels like she has slightly less range, and definitely lacks the mobility Nick has with his special. When it came to difficulty, playing through the game on normal presented some challenge early on that was lessened as I got used to the mechanics. Enabling the modifiers created a huge challenge at times, and is definitely a feature where your mileage may vary depending on how much craziness you want to add into your morning brew. As for the other difficulties, easy was a complete breeze regardless of modifiers. For the Metal and Death Metal modes, I quickly learned these are only to be played if I need some salt for my fries or if I want to replace a controller. 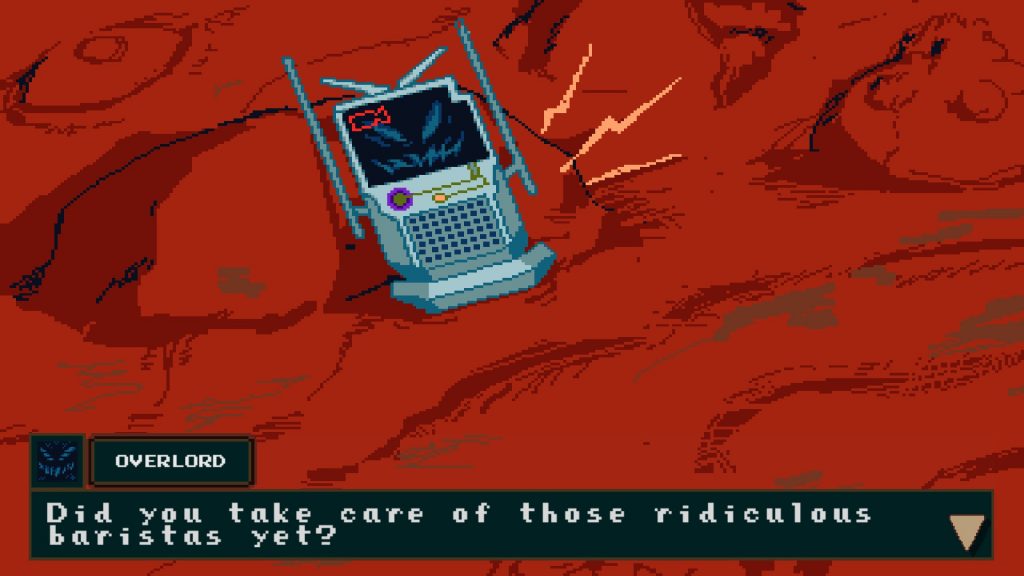 When it comes to presentation, the game looks and sounds great. It knocks the 16-bit visual aesthetic out of the park and helps to capture that feeling of nostalgia that many games come close to, but few nail down. They even throw in an old school password system that lets you jump back to a level should you hit game over, and you can activate cheat codes if you feel like making things easier. The music is also exceptional; I’m not a huge metal fan, but the music in this game sets a tone that makes you want to beat the crap out of any and everyone in your way.

Coffee Crisis is infused with retro goodness. From the metal soundtrack and button mashing coffee drinking game to the wealth of humor, you’re presented with a classic beat ’em up experience. For those looking for a bit more, this game offers up enough variables to shake things up. You can embrace the craziness and ensure you’ll always have a different experience by enhancing your playthroughs with modifiers, testing your skills at higher difficulties, or streaming it via Twitch or Mixer for viewer interaction (which I did not have a chance to test out). If you are looking for a fun brawler to kill some time that won’t over stay its welcome, break out your controller(s) and give Coffee Crisis a sip.

Coffee Crisis pays tribute to the 16-bit era with a head banging good time for retro beat ’em up fans at a great price. 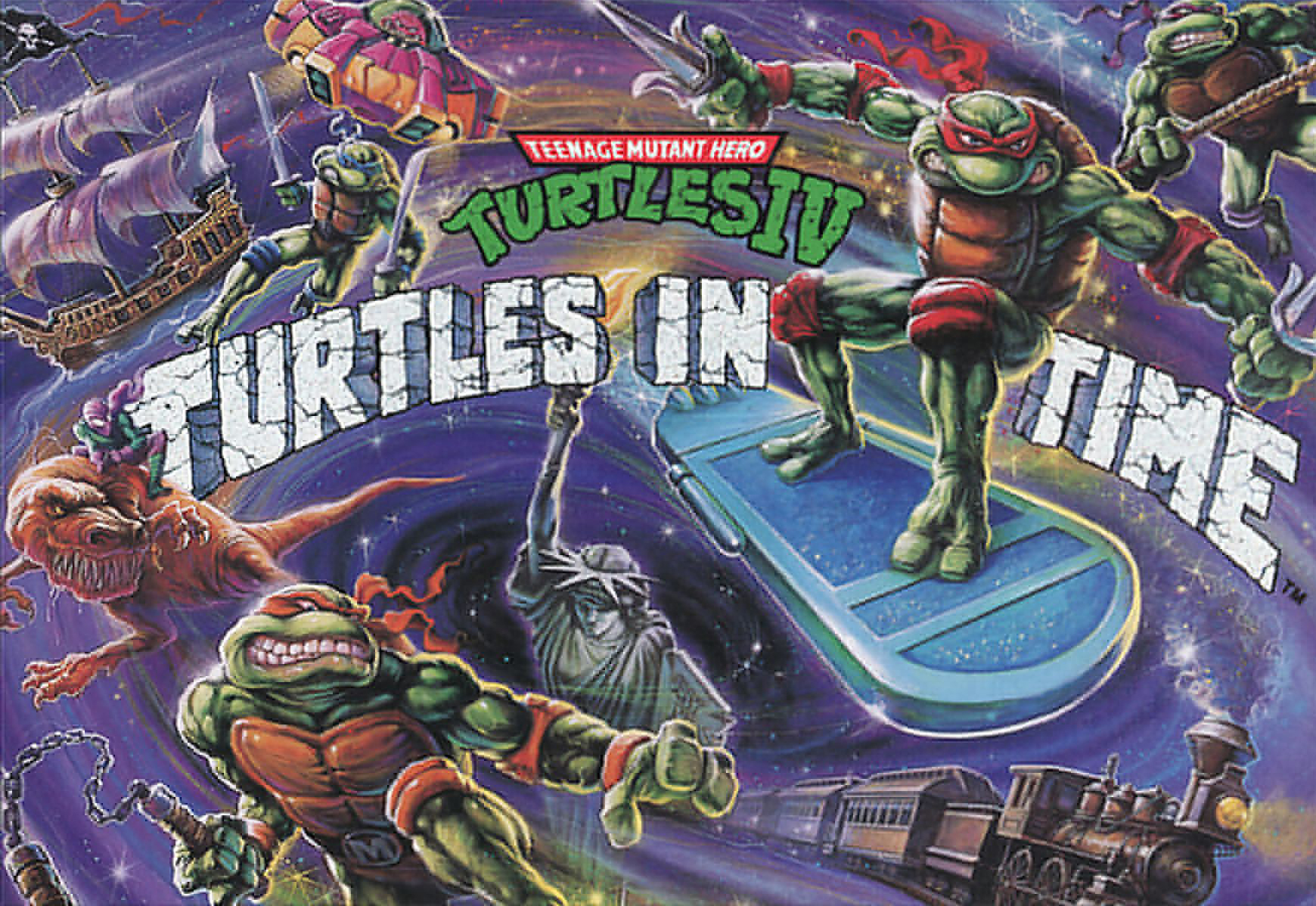