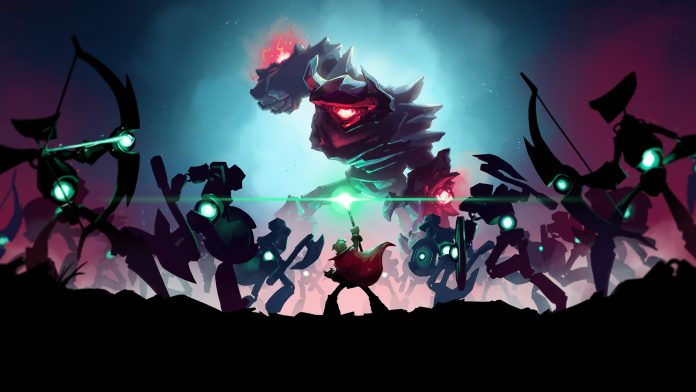 Looks can certainly be deceiving, just take Masters of Anima for example. At first glance, I surmised that this title was a childish adventure game that would be well suited for players about a quarter of my age. I understand that cartoonish graphics are all the rage at the moment, but I usually steer myself away from games that utilise this art style. As time has passed however, I have slowly found myself acquiescing that as more games implement this art style, the further it cements itself into the current landscape of modern gaming.

In fact, the art style is well-suited for Masters of Anima and results in a visually stunning game. The vibrant use of colours and particle effects, combined with the fantastic denizens and varied locations, creates an atmosphere that very few games can rival. But do not let the childish appearance of this game deceive you; Masters of Anima is anything but ‘Child’s Play’. 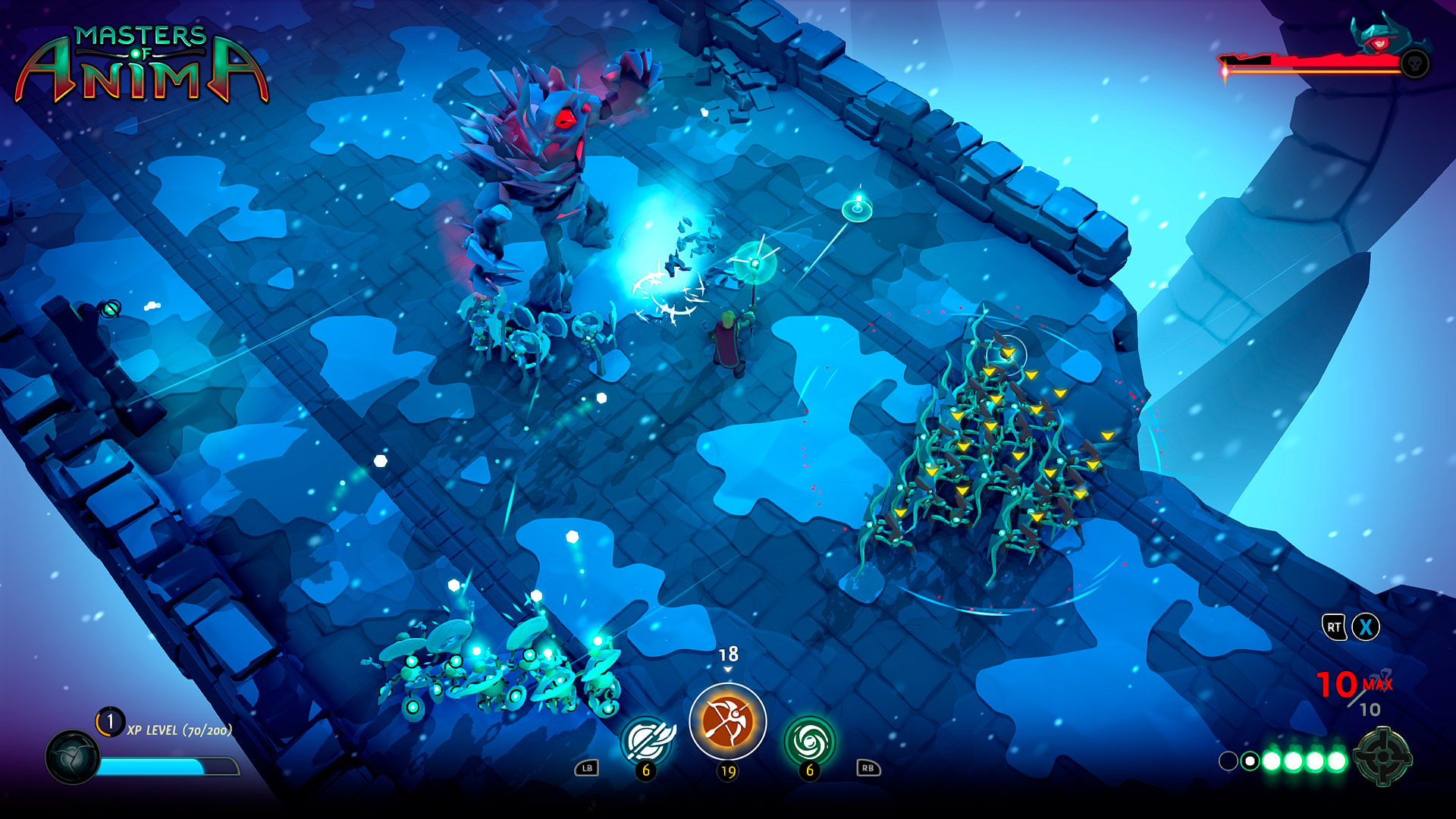 Masters of Anima is described as an original adventure game featuring strategic, action-packed battles; upon inspection of the game’s Steam page, I noticed it was tagged as: Action, Adventure, Strategy, as well as an RPG. Admittedly this left me slightly confused prior to diving into the game, as gamers we have grown accustomed to games conveniently fitting into the pigeon-holes that we use to define games. I was further confounded by a quote that features within the trailer on Steam:

The lovechild of Pikmin and Zelda

Whilst a great one-liner, and clearly intended as a compliment (they are both fantastic games), it is also considerably unfair to the team at Passtech Games. It is remarkably easy to compare games these days, we witness it all the time in the media: Dark Souls-eque, Metroidvania, Roguelike, etc. I concede that these are descriptive, but they are mechanisms that serve as a shortcut to explaining the intricacies of a game. If anything, they are a lazy technique used to pigeon-hole games into the convenient subgenres that we have created over time. The innovative gameplay of Masters of Anima deserves to be recognised as something unique, rather than being compared to pre-existing titles; although the latter is much easier to digest, the former provides the developer with the credit they deserve for doing something a little bit different.

If I was forced to place Masters of Anima into a genre however, I would reluctantly label this game as a DCRTSPA: Dungeon Crawl Real-time Strategy Puzzle Adventure. I can feel your eyebrows raising, but Masters of Anima not only ‘ticks all those boxes’, it excels in each and every department whilst also doing it in its own unique way. If that is too much of a mouthful for you, perhaps Action RTS or even just an Adventure would fit the bill.

Regardless, before we explore the gameplay mechanics further, let us talk about the story that unfolds throughout the game. 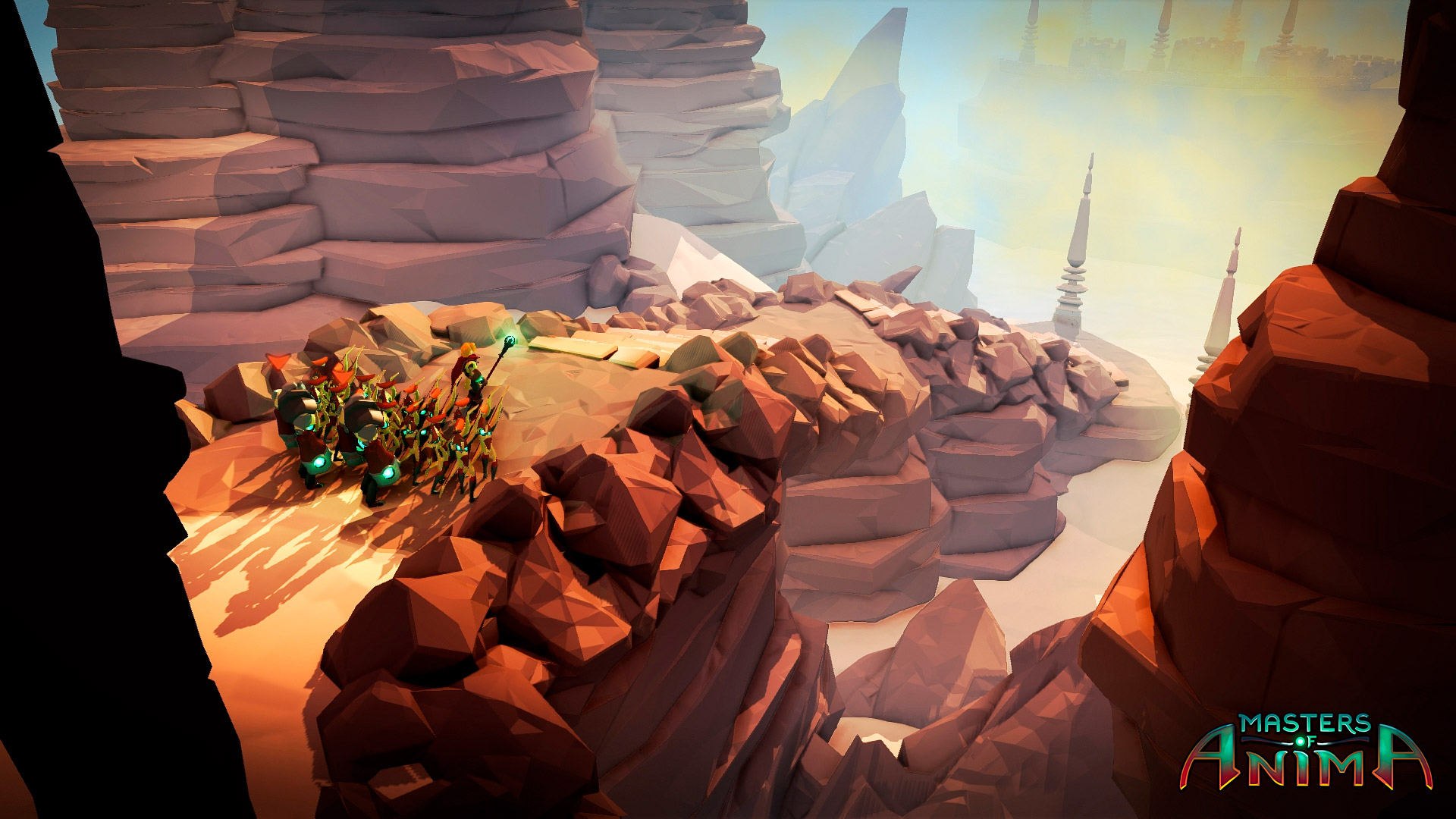 Masters of Anima is set in the magical world of Spark, a vibrant land that is connected via magical power that is the source of all life: Anima. The main protagonist is Otto, an apprentice Shaper who fervently wishes to attain the rank of Master; not just so he can wield incredible powers (Shapers are skilled magic wielders, gifted with the ability to summon Guardians by using Anima harnessed from the environment), but so he can finally marry his beloved fiancée Ana – the gifted and brilliant Supreme Shaper. As the game begins, Otto and Ana live a peaceful life, with the only source of excitement being the upcoming trials of Otto in his pursuit of becoming a Master Shaper.

As Otto is undertaking his first trials however, disaster strikes. An evil Shaper named Zahr has summoned massive Golems to wreak chaos and destruction throughout the world of Spark. To add insult to injury, Zahr sunders Otto’s beloved Ana, resulting in her essence being split into three parts: Heart, Mind, and Body. Even though Otto is still just a mere apprentice, it is clear that he must recover the pieces of Ana’s soul and restore her, as well as defeat Zahr’s evil Golems and ultimately Zahr himself.

The premise of Otto being an inexperienced wizard whose power will increase as the story unfolds is certainly nothing new. The age-old story of a young hero on a quest to save his beloved whilst battling a much more powerful enemy has been done countless times before. But the way that the story unfolds throughout Masters of Anima has been executed rather well. There is a nice balance between in-engine set pieces as well as cut-scenes that utilise a more ‘hand-drawn’ art style. The game never takes itself too seriously, with several attempts at humour popping up throughout the narrative, although some jokes admittedly fall a little flat. Despite the plot being familiar, Masters of Anima contains enough originality to keep the story interesting; and the atmosphere that the vivid graphics and epic soundtrack flawlessly create together make the game a very enjoyable experience. 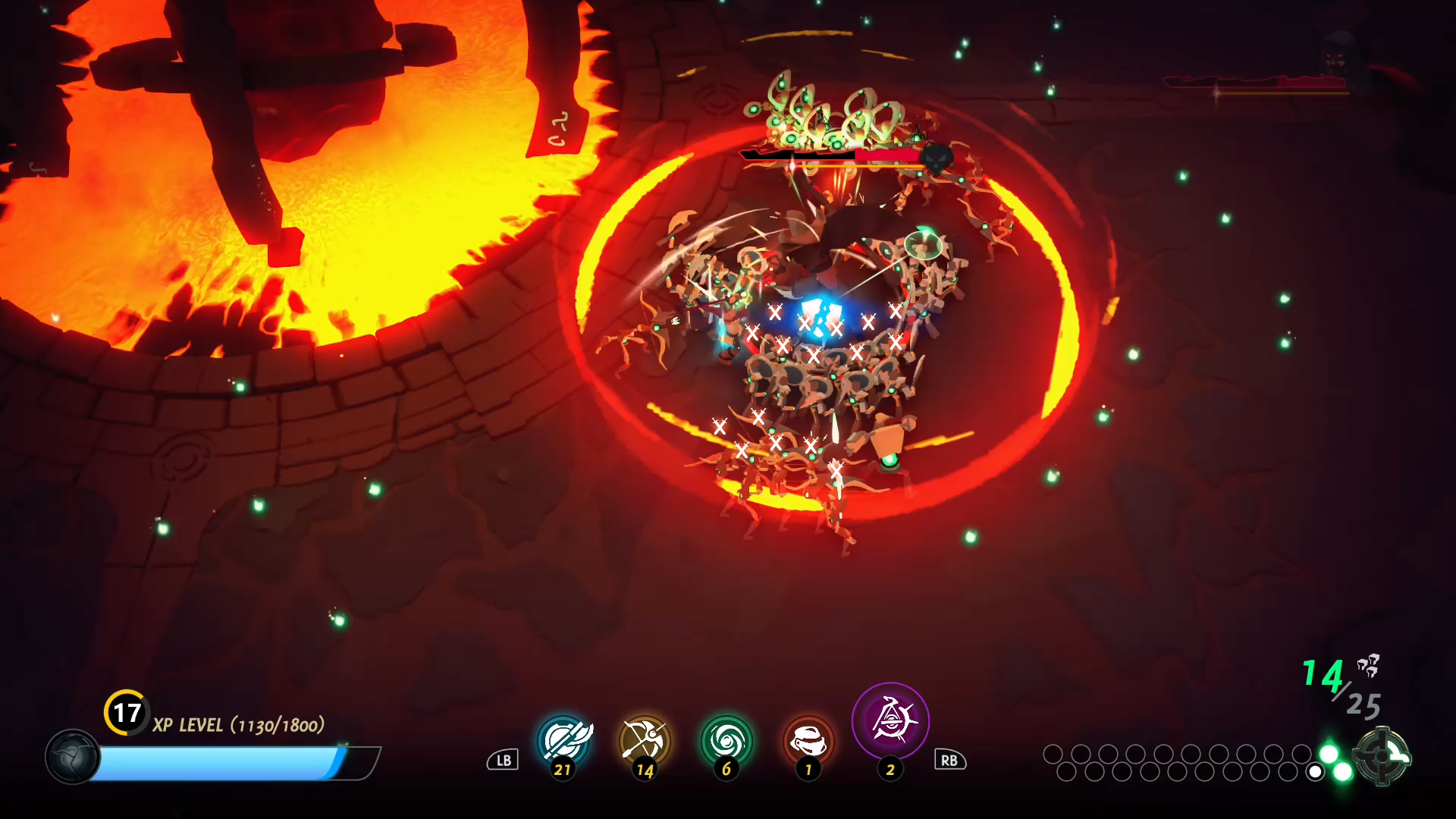 Masters of Anima begins as a fairly simple affair. Controlling Otto is straightforward and intuitive, with the ability to attack enemies yourself through the use of a single button. If that was all there was to it, then Masters of Anima would just be like countless other dungeon crawl experiences out there. The RTS element is where this game really sets itself apart and creates something considerably unique. In the majority of RTS games, you control units that you create utilising some kind of resource that you have to gather or create; the actual player themselves never actually appear on the battlefield. Whereas in Masters of Anima you control Otto the entire time, whilst also trying to coordinate your summoned units and gather Anima for summoning and other abilities. In the early stages of the game this is very easy to manage, as you only have the ability to summon one type of Guardian and most encounters are just a case of sending them in to attack and summoning more as needed.

As you progress throughout the game, you will eventually find yourself commanding up to 100 Guardians from 5 different classes or types. Without giving too much away, each class has unique abilities in combat as well as distinct uses out of combat situations that are used to solve the puzzles during your play-through. The puzzles themselves are not very challenging if I am completely honest, but several of them have alternative ways to solve them; something I did not realise until after the fact. The complexity of the game develops at a fair and relaxed pace, introducing a new type of Guardian to summon and allowing the player more than enough time to become comfortable with their uses.

Another surprising aspect of the game was how well the controls worked with a controller. PC users will no doubt feel more comfortable with a mouse and keyboard, which makes complete sense considering the flexibility it provides when selecting groups of Guardians on the battlefield. For those of us on console however (Xbox, PS4, Switch), we do not have that option. I feared that the controls would be clunky or likewise limit my tactical deployment of summoned units. Well let me put you at ease: controller play is fundamentally simple (single button presses for some actions, multiple presses for others) but also allows for some advanced techniques further down the line such as selecting specific units. 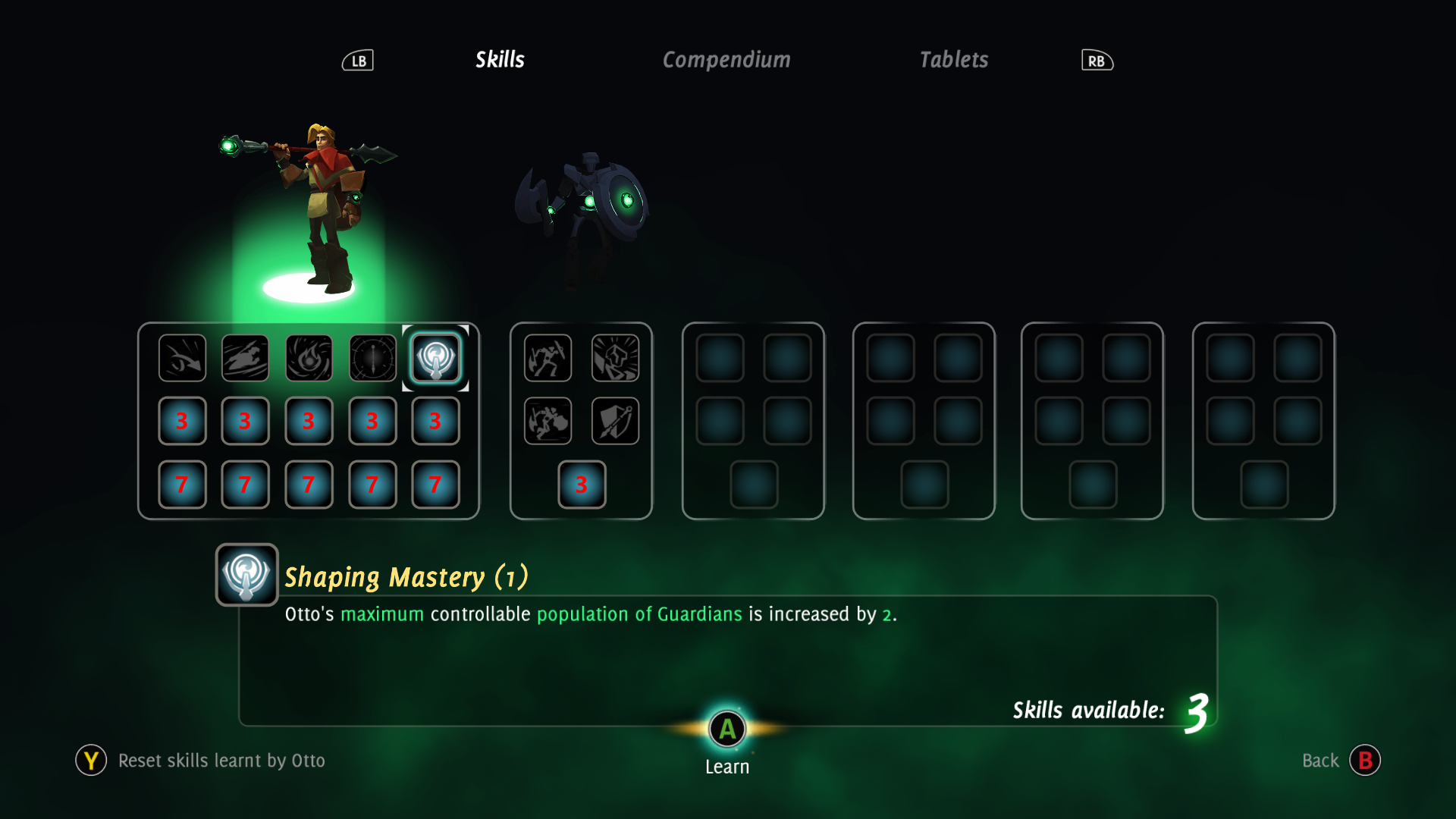 Whilst the game features a manageable difficulty curve, steadily and progressively becoming more challenging; you very well may encounter the occasional hurdle, such as a boss fight that you cannot overcome. I know I certainly did. This is where yet another dynamic of the game plays an integral part, and that is the RPG element: the skills tree. As you acquire XP and level up, you attain skill points which can be spent either to improve your own skills or those of your summoned Guardians. This one aspect allows countless different ‘specs’ of Otto and his units on the battlefield, as well as redistributing points for certain battles. Since you can do this on the fly via the pause menu, it enables you to relatively quickly alter your ‘build’ if you soon discover it is not working for you.

After several attempts at the penultimate encounter of the game, I found myself in a slightly frustrating situation as I kept failing miserably at the battle. I say slightly, as it by no means left me wanting to throw my controller in a fit of rage; but it was enough to make me take a break from the game and figure out what I was doing wrong. Up to that point the game had been relatively balanced for me, which seems reasonable since I had selected the medium tier of difficulty for my first play-through. Rather than be disheartened by not being able to progress past the encounter, I instead found myself examining my play-style and realised I needed to change things up. After this introspection, I successfully defeated my foe and then made surprisingly quick work of the final encounter that subsequently followed.

For a game that at first glance appears as a simple cartoonish adventure, and is easy to get into and control, the depths of complexity that lie beneath the surface provide a deceptively challenging experience. 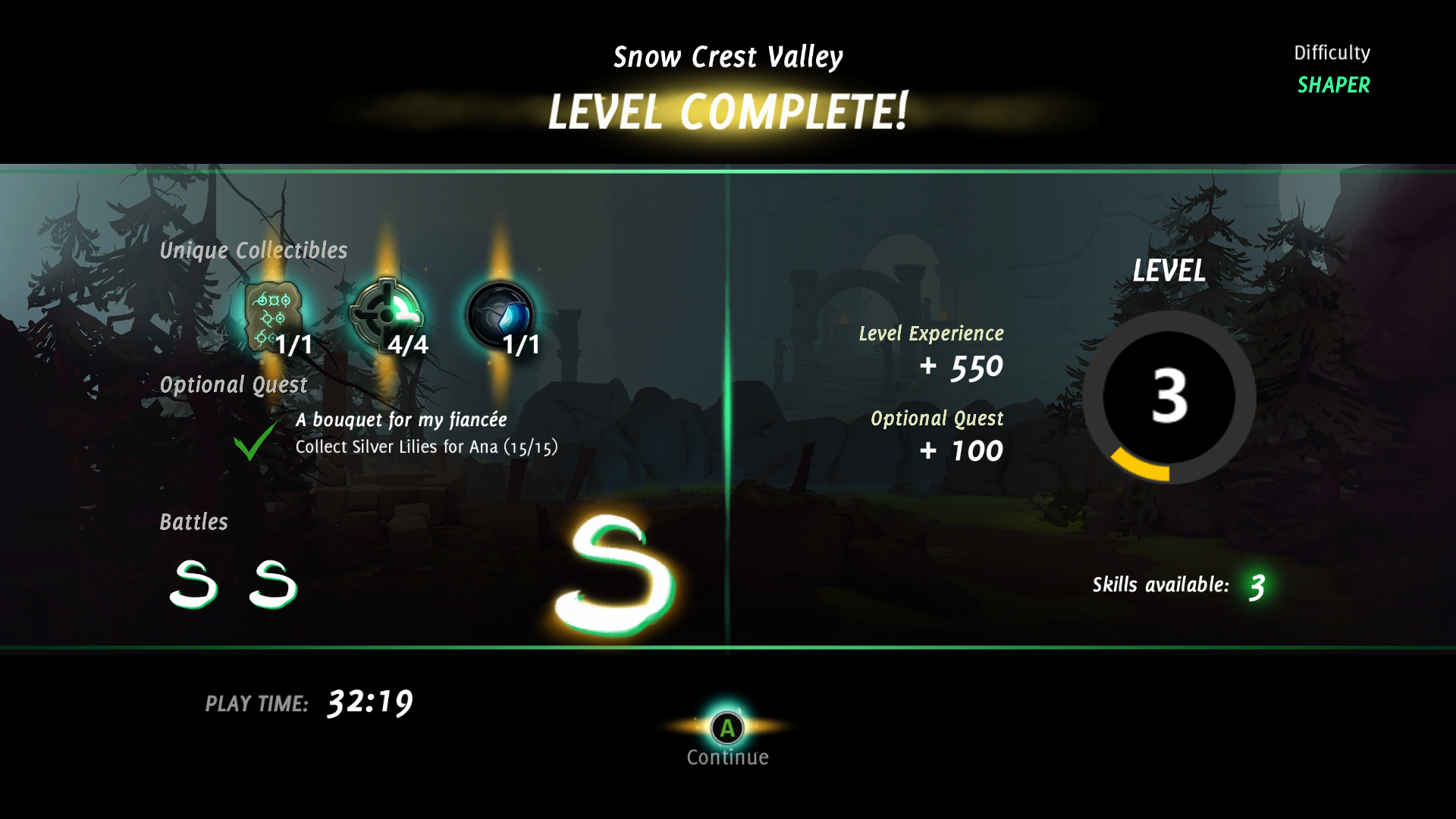 Masters of Anima is one of the most pleasant surprises I have experienced in quite a while, and easily the best DCRTSPA I have ever played (I do not think the term I coined is going to catch on). In all seriousness, Masters of Anima is a fantastic tactical game that is not quite like anything out there. It is easy to identify elements of RTS/RPG/etc., but very seldom does a game with this much complexity manage to package it all together quite simply and present it via a pleasant cartoonish experience. The crisp graphics and perfect matched soundtrack combine to provide an aesthetically pleasing environment to explore, and the collectibles/optional quests/ranking system that are pictured above provide hours of replayability.

Whilst my play-through of the game only took me 8 hours, I technically only completed 68% of the game. This is due to accidentally skipping some encounters, and failing to collect all of the collectibles or complete all of the optional quests. I also finished with a final Shaper Rank of C, so I will undoubtedly be playing Masters of Anima again in pursuit of the elusive S Rank.

In my opinion, especially considering the price of the game, there is no question whether you should buy Masters of Anima or not. It may not appear as something you would typically play, which was certainly the case for me, but it is certainly a game you will enjoy. The real difficult question however is which platform to purchase the game on? I honestly feel that the game is well-suited to whichever play-style you prefer: at your desk, on the couch in the living room, or on the go. In fact, I think Masters of Anima would lend itself quite well to playing on the go, as the Nintendo Switch desperately needs another wildly addictive experience.

Surprisingly simple yet deceptively complex, Masters of Anima is a beautiful game that will engage and challenge you, probably more than you would expect.

A digital copy of this game was provided by the publisher for review. 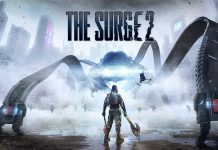