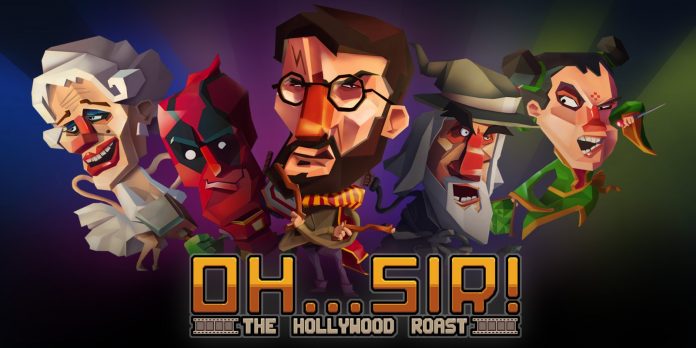 There is a good idea nestled within Oh…Sir! The Hollywood Roast, but a very repetitive structure dulls the limited content very quickly and makes the game hard to play for longer than one sitting and impossible to recommend.

The follow-up to 2016’s Oh…Sir!! The Insult Simulator shares a lot with its predecessor. The game is a hybrid comedy/puzzle/fighting game where you must defeat your opponent by slinging a series of salacious insults in their direction. This follow-up game in the Oh…Sir! series was originally released on PC last year, but has seen staggered releases in 2018 on other platforms. The game hit the Nintendo Switch in January, the PlayStation 4 in May and came out on the Xbox One last month.

The core gameplay of Oh…Sir! The Hollywood Roast revolves around insult battles. In each game, usually lasting from 3 to 8 minutes, you face-off one-on-one against your opponent much like a traditional fighting game. To defeat your adversary, you must build the best insult that you can from the words, expressions and sentence fragments presented on-screen each round. You take turns picking your next sentence fragment in order to jumble together fully formed insults. Complete sentences will take away from your opponent’s lifebar and the first character to be “insulted out” is defeated. 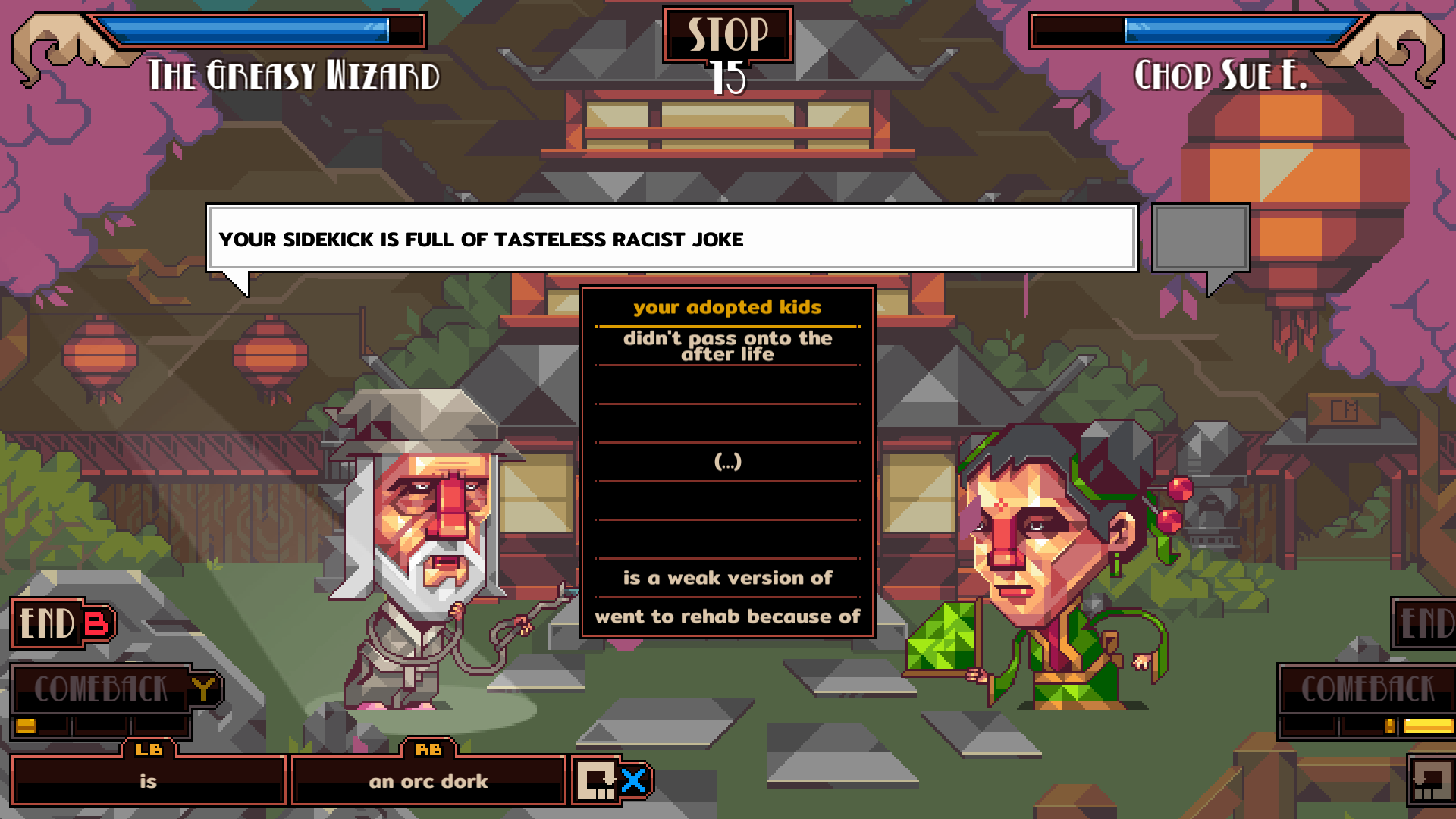 As you enter comedy combat, you’ll select one of the game’s nine character. Each one is a parody of a Hollywood character or stereotype. These characters start at great like Dirty Potter, a mix of Clint Eastwood’s character from Dirty Harry and Harry Potter. But other characters range from mundane like Wisecrack (a combination of parts from major Marvel characters into one vessel) all the way down to racist. To fully complete the game, you’ll need to play as Chop Sue E., an Asian Geisha stereotype complete with fully clichéd voice-over. It’s as unfunny as you think.

Each one of these characters present strengths that you can use to boost your score slightly and weaknesses for your opponent to pry on. Dirty Potter, for example, is weak to calling his manliness into question. You can exploit this by saying that you saw his face at a vegan festival for big points, for instance. Why veganism is feminine is beyond me, but stay with me. 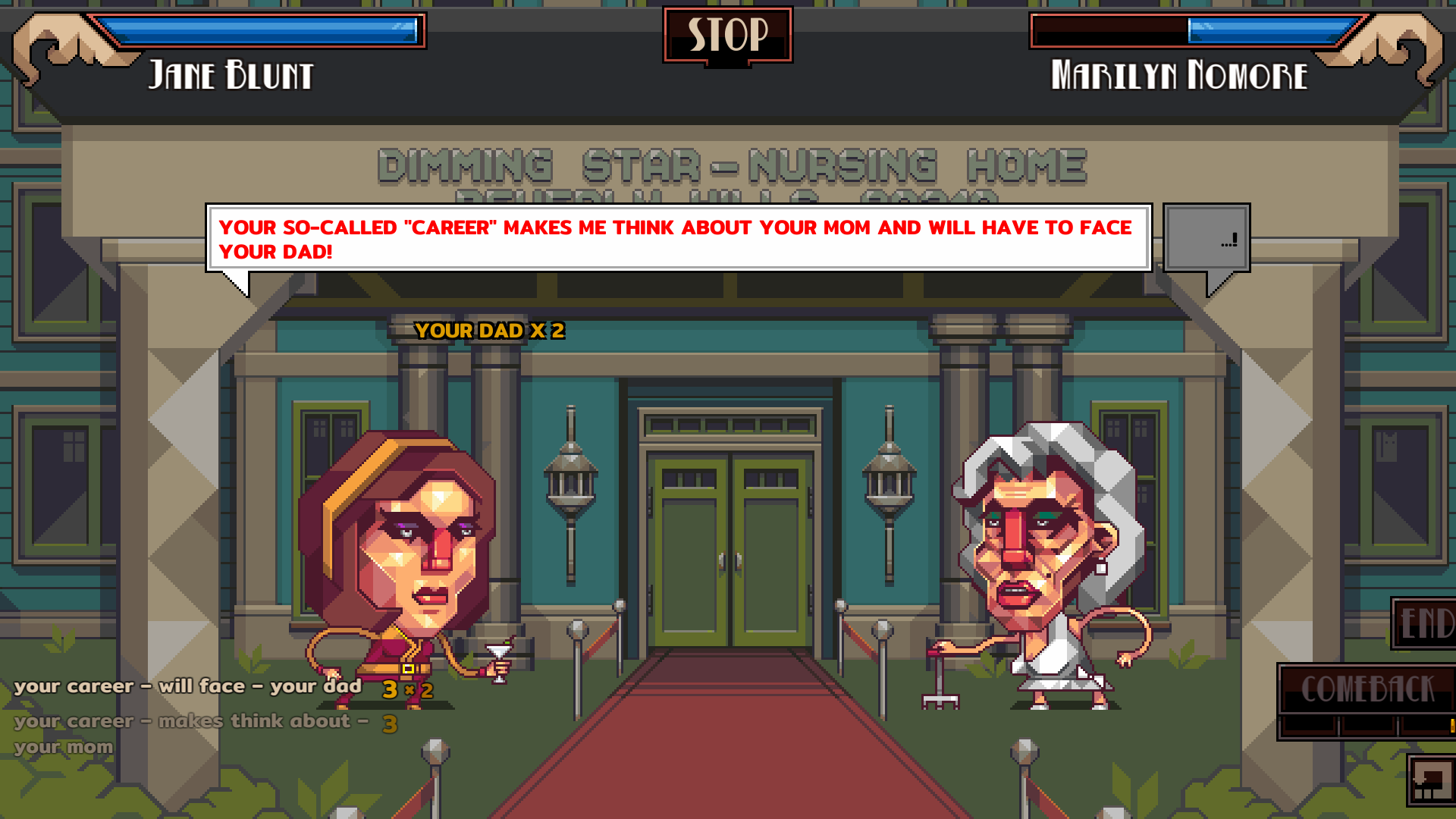 The bulk of the content in the game revolves around the game’s “story” mode. Each of the game’s campaigns take around 25-40 minutes to complete and sees you take each character through a series of five battles. Like many mobile titles, you’re awarded star ratings at the end of each battle based on accomplishing certain objectives during the fight. You may need to score a combo by using the same noun for multiple rounds in a row or score a roast by stringing together a 16+ point insult. Play one of the game’s nine character campaigns and you’ll glean 90% of the game’s content from it as each campaigns’ structures is similar, all the way down to sharing objectives.

The game’s structure rarely presents the opportunity for you to create a masterpiece with your words because options are so limited in each round. Even with the two extra phrases you hold onto for your use only, you only have 12 options to choose from each round. This means that you’ll likely only have 2-3 nouns, 2-3 verbs and 2-3 expressions to choose from and these options get recycled fairly often.

In other puzzle games, you know exactly what patterns will land you more points. In Oh…Sir! The Hollywood Roast, you’re usually left wondering if your insults will land you big points. Even when you think that you have crafted the perfect insult, the game’s somewhat arbitrary scoring system doesn’t always deliver. Some things will always give you big points (integrating comments about your current stage, prying on opponents’ weaknesses, or using “Comebacks”, the game’s super moves) but experimentation with actual comedy with the game’s limited dictionary rarely pays off. This leads to a game with little replay value that becomes fairly stale very quickly.

I liken playing this game to playing a game of Mad Libs with an 11-year-old. They are smart enough to give you some wit, but they usually rely on a small set of simple words to accomplish their goal of making you laugh. It may be funny the first time he writes “fart” in a noun space, but this tactic quickly grows stale by the third incident.

Outside of the core story mode, the game also has a 2-player mode. You can play via local or online multiplayer. I played the game with someone on the same couch and applauded the game’s low barrier to entry. However, the game lacks depth and once you have played a few times, your Player 2 will have likely exhausted all of the game’s replay value. Outside of the story and multiplayer modes, the game also presents you with a tutorial and a “single scene” mode where you can play any scene/character against the AI. 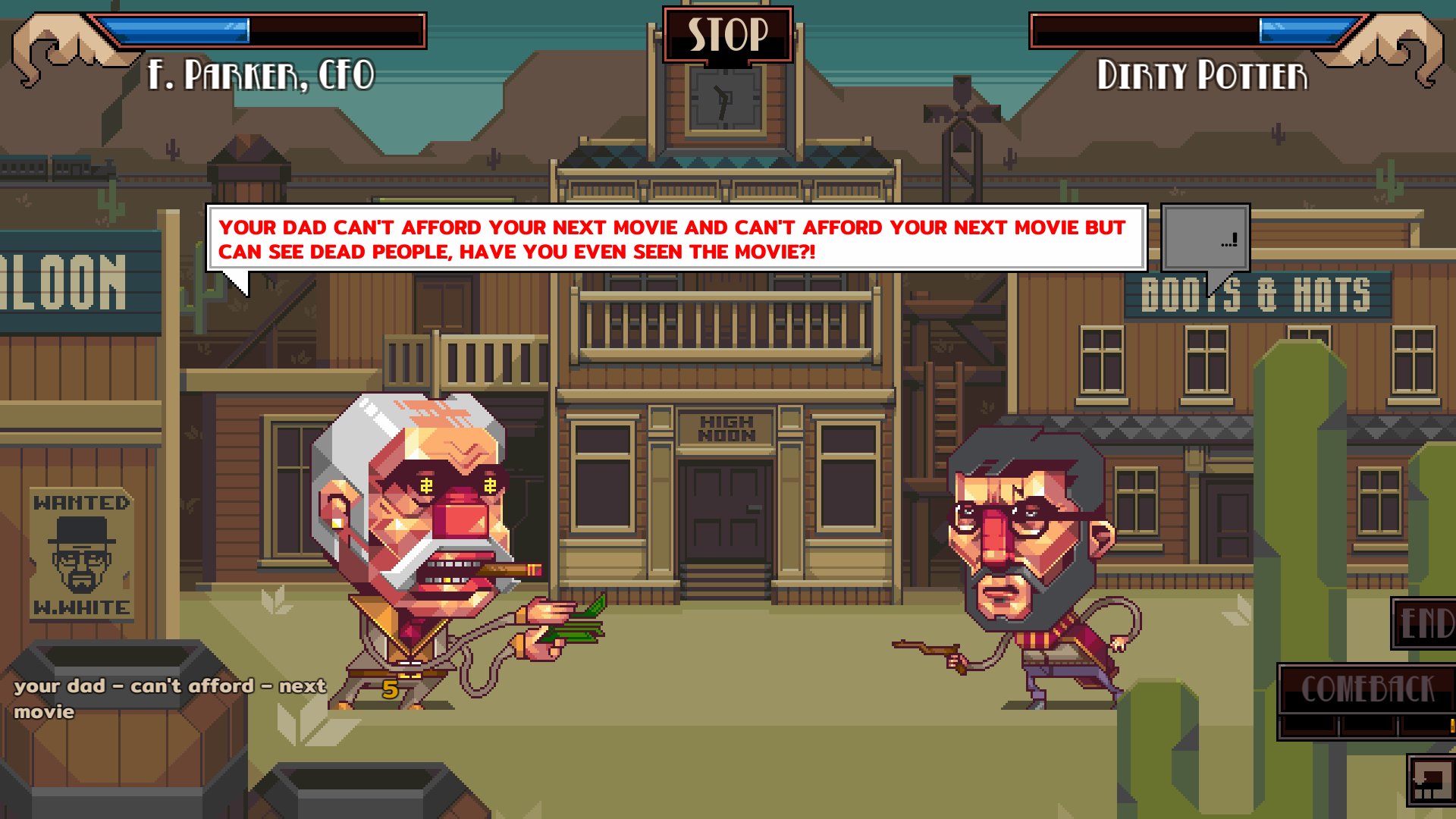 The art style in the game is unique. The characters all have their own distinct look parodying the appropriate source material with low-polygon art. Although I liked the art-style in the first game a little bit more (largely because of the “stringy” arms in this title), the art was the highlight of the experience for me.

The voice-overs are okay, but aren’t helped by the fact that when they’re read by your character, they aren’t read in a fluid way. That problem is all structural though as it would be impossible every character to read every combination of sentence fragments together. When characters read their completed insult at the end of each round, it just sounds stilted. Imagine your favourite sports game’s earliest iterations with voice-over; after playing through 5 or 6 matches, you’ll hear every quip from the commentators and begin to see the seams of how they were recorded; you’ll suffer through the same phenomenon here.

In addition, there are some minor issues with the default audio mix in the game. In some instances, the voice-over is too low and is drowned out by other audio elements (especially the sound effects). This can be altered using the pause menu, but the inconsistency in mix made it hard to get perfect with one setting. 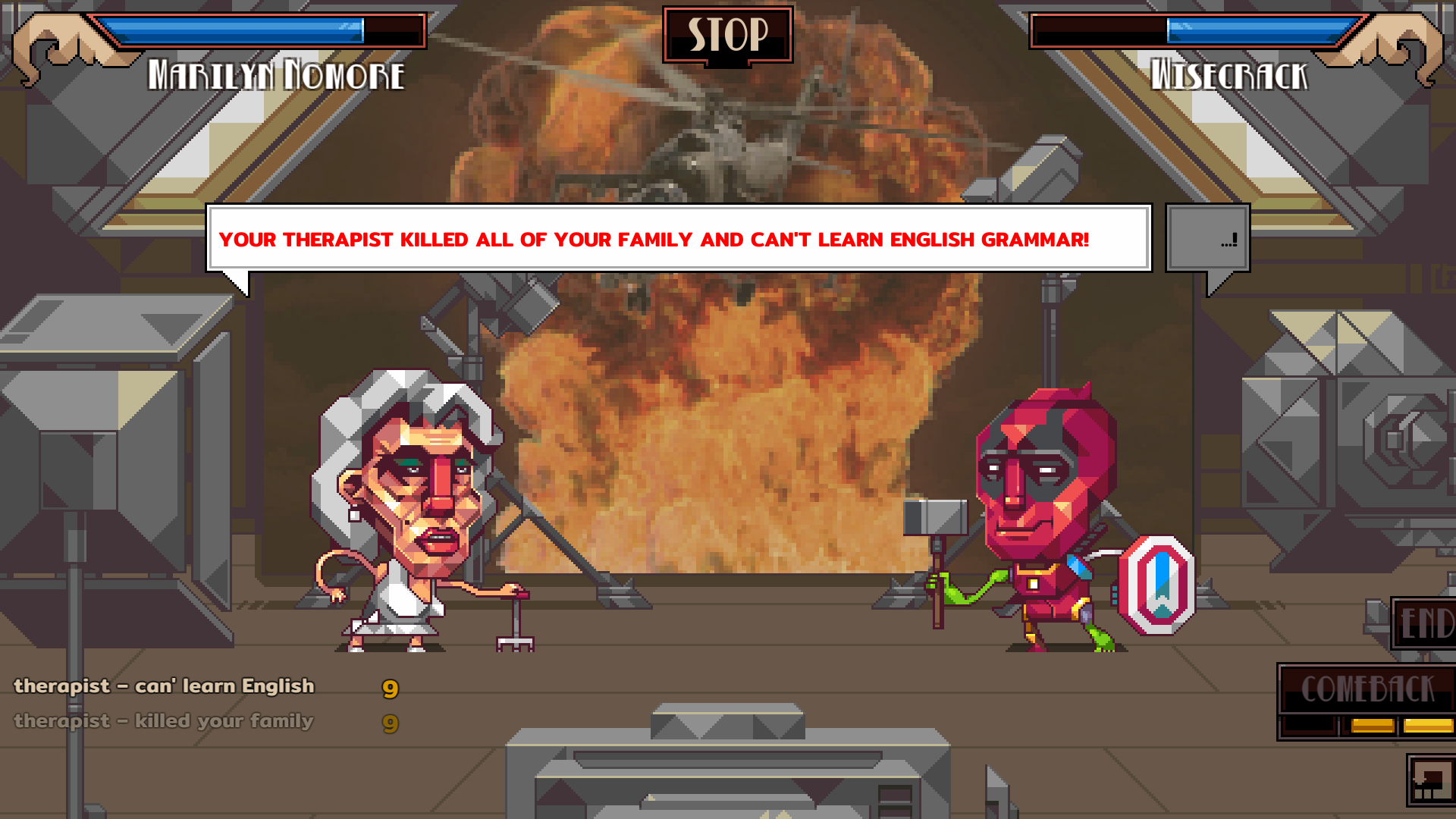 All things considered, Oh…Sir! The Hollywood Roast is a unique fare. There are very few games on the market that simultaneously satiate puzzle and fighting game fans in the same product, but a combination of lack of replayability (or even “finishability”) and bland writing hold this one back from a recommendation.

Let me summarize my thoughts using the game’s own dialogue.

I wish I could have done that better.

On the surface, Oh…Sir! The Hollywood Roast may look like a unique little experience. But repetitive and dull gameplay hold it back from providing any entertainment past the one-hour mark. 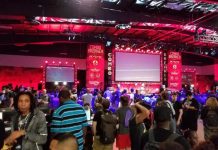 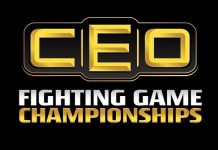