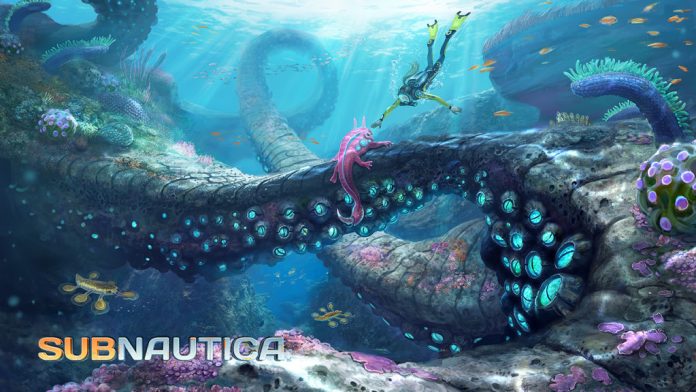 Subnautica is a open-world survival game released by Unknown Worlds Entertainment which began in early access since 2014 and got an official release this year at the end of January; it was definitely worth the wait. Crash landed on an alien planet you set out to find a way off and get back home, spending the majority of your time beneath the waves s avenging for materials and fending off the local wildlife. While the end goal may be to escape this unknown world, there are many different twists and turns along the way that make the journey the best part of the experience.

Many survival games today have some sort of crafting and base building aspect to them, whether it features on the periphery or comprises a core element of the gameplay. There are a few things about Subnautica’s base building/crafting system that I like, which I felt separated it from much of the competition.

The first being that the system is tiered; during the game you are somewhat limited on where you can go depth wise. You will run out of oxygen very quickly in the early parts of the game until you are able to craft better tanks, or later on actual submarines to explore the depths. This limits you on what you can find early game and thus what you can build. As you advance through the story and develop new technologies you are able to craft more complex things. I feel like this helps new players who in other survival games might become overwhelmed with the possibilities of the crafting system. This type of system lets you naturally grow into it, and it created a much more welcoming atmosphere.

I was also appreciative of the fact that most everything you can make has a place. In other games you typically won’t use the first tools you make later in the game because they quickly become obsolete, but in the case of Subnautica almost all the new equipment you get is what I would consider ‘sideways progression’. In the case of watercraft there are many different kinds and they all have various purposes which you utilize at different points throughout the entire game. Instead of replacing tools and watercraft, you upgrade them with new parts and better modules. I really enjoyed this type of progression because it didn’t feel like I wasted my time crafting a wealth of equipment that I eventually would have had to discard or trade in.

Subnautica has another advantage here, over a majority of other games in the survival-crafting genre. There is something about being able to explore in a 3D environment that makes you as a player feel much more immersed int he world that you’re exploring. Cruising around in my trusty Seamoth, the first submersible you can make, is fun and exciting especially when you are weaving in and out of underwater caves and tunnels. There are lots of things to find and discover in the game compared to other 3D environments; the world never feels empty. You can find resources, bases made by previous survivors, crash sites, alien structures and much more at almost every turn. There are some areas of deep water that you might have to traverse where it’s a bit more barren, but for the most part I felt that there was almost always something close by if you were aware of your surroundings.

This brings up another aspect of exploration that makes this game what it is: while you’re exploring the great depths you always have to be aware that there are creatures bigger than you everywhere. Without dipping into spoiler territory, lets just say there is always something bigger in the sea; and often something bigger than whatever that is. This keeps the game exciting as you have to constantly be on the lookout for threats at all times, even when it seems like the water is calm.

The narrative aspects of this game are well done. I do not want to talk about the core storyline too much as it’s fairly easy to dip into spoilers, so let’s talk about quality here. There is plenty of story to go around for what initially seems like a plot-less game. You’ll get a lot of your narrative bursts from SOS broadcasts via your radio, lost PDAs and just discovering plot points along the way. This game does not use cutscenes, so you are immersed in the game the entire time even when there is important dialogue. The story elements are intriguing and keep you interested in the game, creating the urge to push forward with progression to see more.

Traversing the depths of Subnautica is an absolute graphical treat. Every biome has a distinct visual identity and it makes you want to explore each in detail. Checking out all the different creatures and plant life in the vast oceans of Subnautica feels rewarding in and of itself. While a lot of the creatures are similar to their earth counterparts there is enough change and detail that you still want to check them all out. Predatory creatures are done particularly well and for the most part you can tell that they are predators before you get to close. The one downside for me was that the draw distance was not far enough. In the vast ocean expanse you are traversing you definitely want to be able to see as far as possible. While the ocean floor loads out pretty far you do not see plant life until your pretty close which destroys the immersion a little. You see this problem less when your just swimming about but when you get into the submersibles the speed catches up with the rendering.

Keeping you on the edge of your seat is the name of this game and the music/effects are key to adding to this atmosphere. The music specifically is brilliant and it’s one of the few games that I decided to keep the music on to keep me in the game. The sound effects are additionally really well down, eliciting the feel of being underwater, with the muted/watery tones. Another useful audio aspect was that I was able to use the positional audio to help pinpoint predators before they became a problem.

At the end of the day Subnautica is what many open-world survival games should shoot for. The exceptionally well done mix of narrative, base building and exploration makes this game one of the best I have played in the survival genre. I have put in about 100+ hours in the game with multiple playthroughs and am still loving it. The game’s hostile creatures still scare me, and I know that there are many secrets I still have not discovered, and many bases for me to still craft. Subnautica stands apart and above as a pillar of the survival crafting genre, and I can see myself playing this game many more hours in the future.

Fans of the survival-crafting genre would be remiss if they stayed on dry land and missed out on the submersed splendor that is Subnautica.