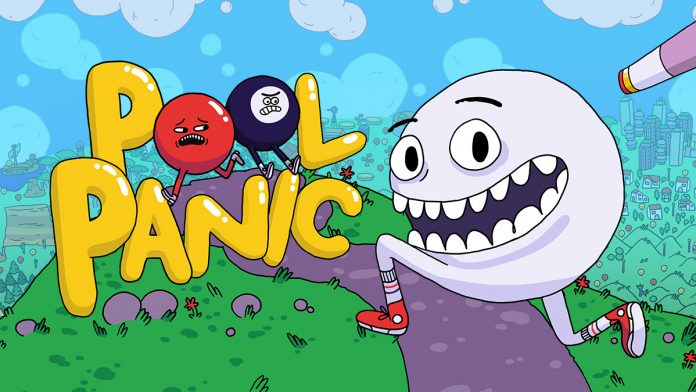 Pool Panic is the gamification of chaos, and comes with the appropriate upsides and downsides as a result.

Pool Panic is the first game from Rekim and it turns the game of pool completely on its head. In a world that’s part Toy Story and part Beavis and Butthead, you knock around a humanoid cue ball into other humanoid pool balls. The game’s goal is to have you clear each of the game’s “tables”. These tables begin as large versions of the traditional pool-hall billiard table but quickly take a dive into the bizarre and intriguing.

Pool Panic has tons of variety…

After completing a three-minute tutorial showing off the basics of the game (how to aim, lock-on, how to hit your cue ball into the other balls and how to clear a table), your white cue ball is warped through time and space to drop into an overwhelming large overworld. In the middle of this sprawling map is a central spire. Every time that you complete one of the game’s levels, this spire in the middle of the map will rise out of the ground. Without an ounce of reasoning to explain your character’s journey, you set out to complete all of the game’s levels to win. This game contains over 100 levels for you to complete and work the number displayed on this central spire down to zero. Not every game needs a story. 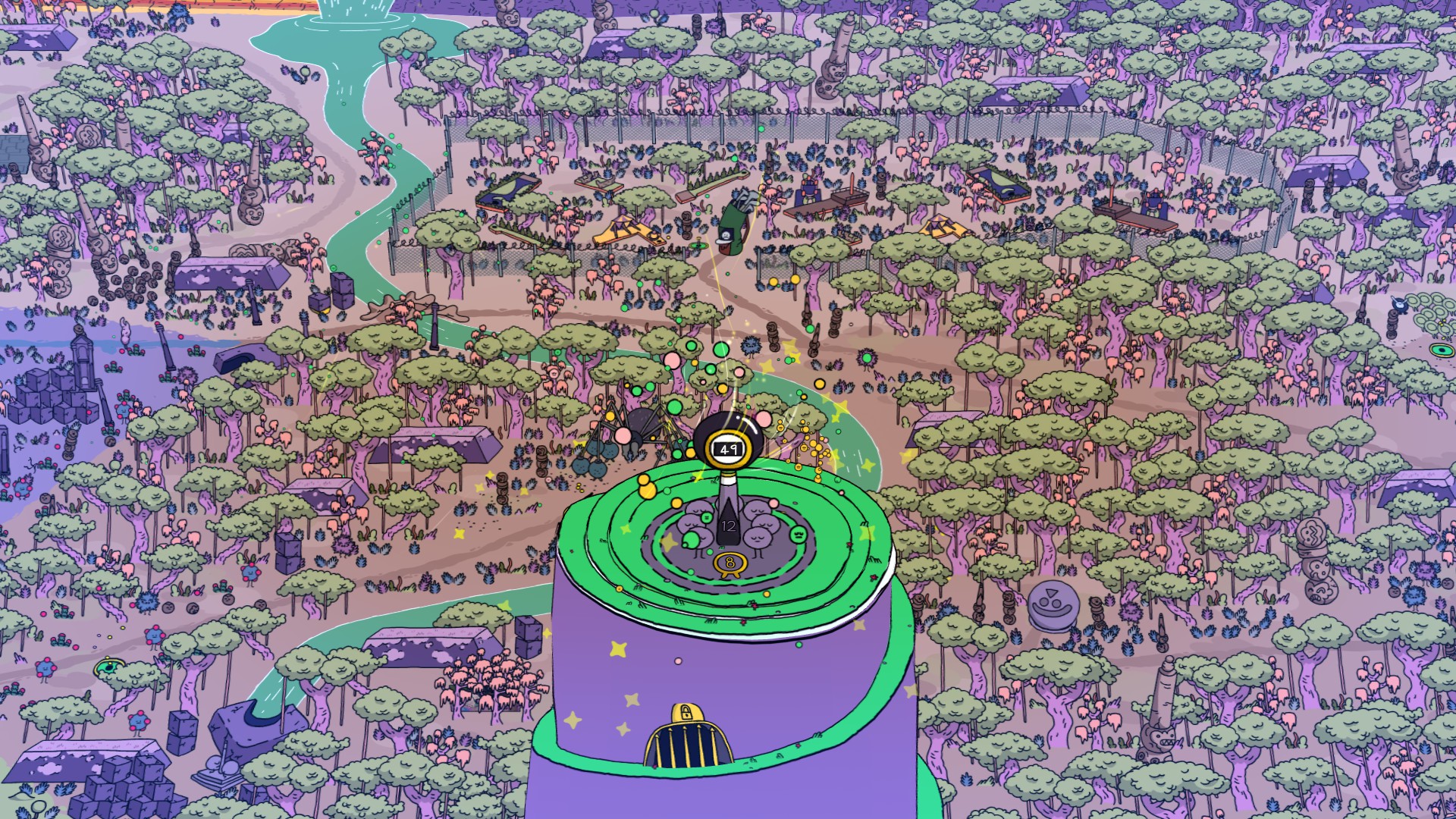 As you begin to explore the world, you’ll notice that some of the levels share similar motifs. There’s a jungle, a city, an island, an outdoor concert and even more areas to explore. Each area will expose you to new mechanics; this game just isn’t about knocking pool balls into pockets. However, each level will share some basic similarities: sink the non-8 balls first into the pockets set out in the environment, avoid sinking your cue ball in those same pockets and do so as quickly and efficiently. You win each level by figuring out each stage’s gimmicks and sinking all of the balls on the table. However, these pool balls won’t go quietly.

There are a myriad of different ball types all with their own unique characteristics. You’ll face off against the basic red balls very often (they just stand around) but will also be matched up against dodgy orange balls, strongman balls, dark balls that get angry and “tilt” the whole table, raccoon balls that steal, sheep balls that run and the list goes on and on. Beyond these tricky buggers, you’ll also have to figure out how to clear the table as not every levels gives you “obvious pockets” to sink the balls into.

Easily the best part of Pool Panic is the first ten seconds of a level. It’s the high you’ll experience as balls move around the table you while you try to figure out exactly what the heck is happening and how you can win. There is an insane amount of variety in Pool Panic; it’s the game’s greatest strength. You’ll mow lawns, you’ll destroy the sets of a broadway-style play, you’ll vomit off of the side of a pirate boat, you’ll rob a bank, have a barbecue and pick on animals on a campground. More often than not, the game will cause you to smirk. 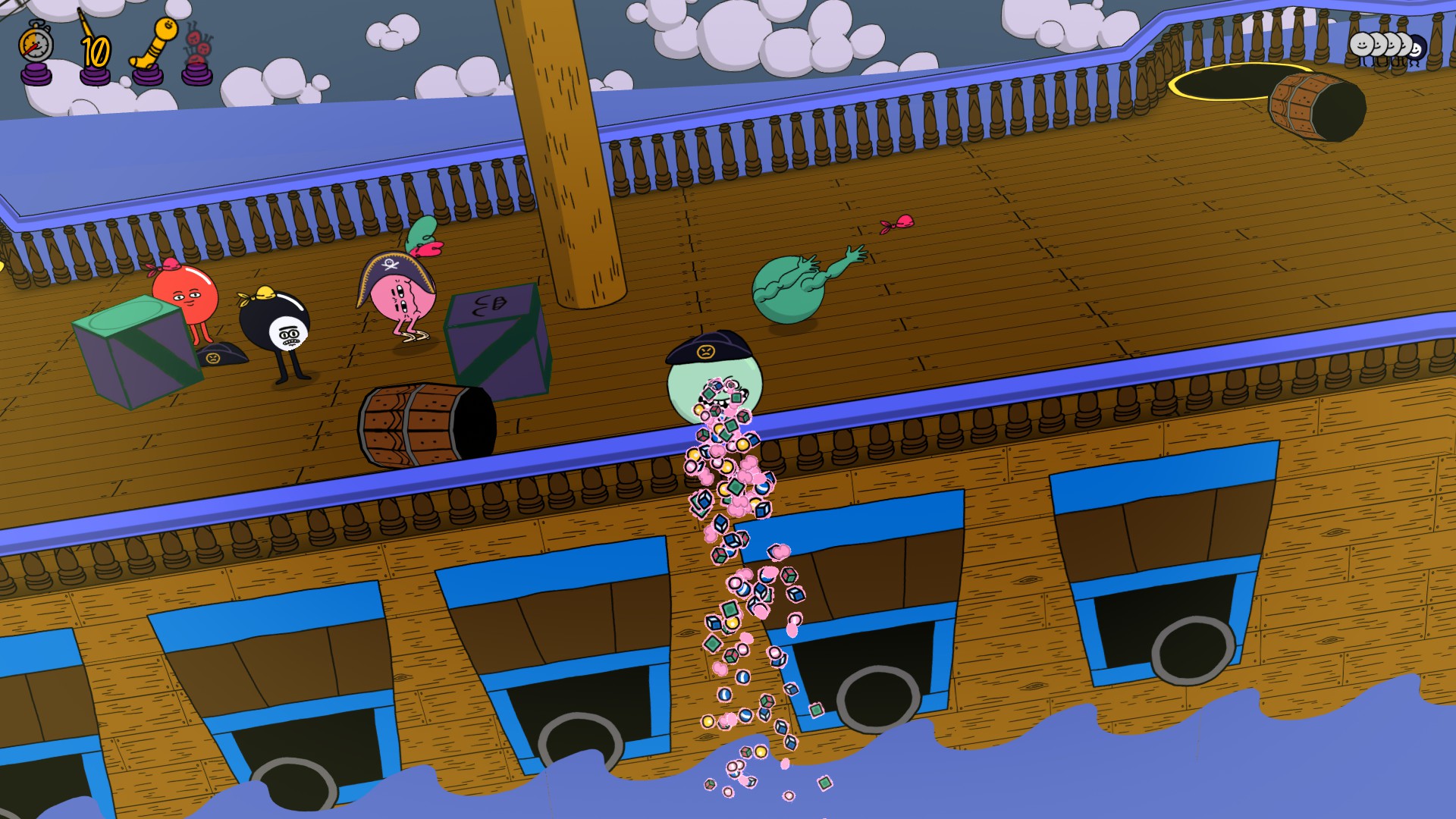 …but struggles with scope, controls and lack of instruction & direction

With that variety, however, comes Pool Panic’s greatest weakness: the game’s scope hurts the experience. For every mechanic that works well, there’s another one that isn’t fun or doesn’t work as slickly as intended. For every brilliant level, there is one that annoys or frustrates. The game has flashes of brilliance: you’ll play pool while rock climbing (thumbs up)… then you’ll be asked to swing on ropes in the jungle. Good luck getting the controls to cooperate. You’ll joust with other ball (works well) and then you’ll chase ghosts with a candle (yikes).

In short, a lot of the mechanics and levels feel like a prototype or like an early iteration. I can imagine a version of Pool Panic that has 50 levels with half of the mechanics (keeping only the cream of the crop) while adding double the polish. 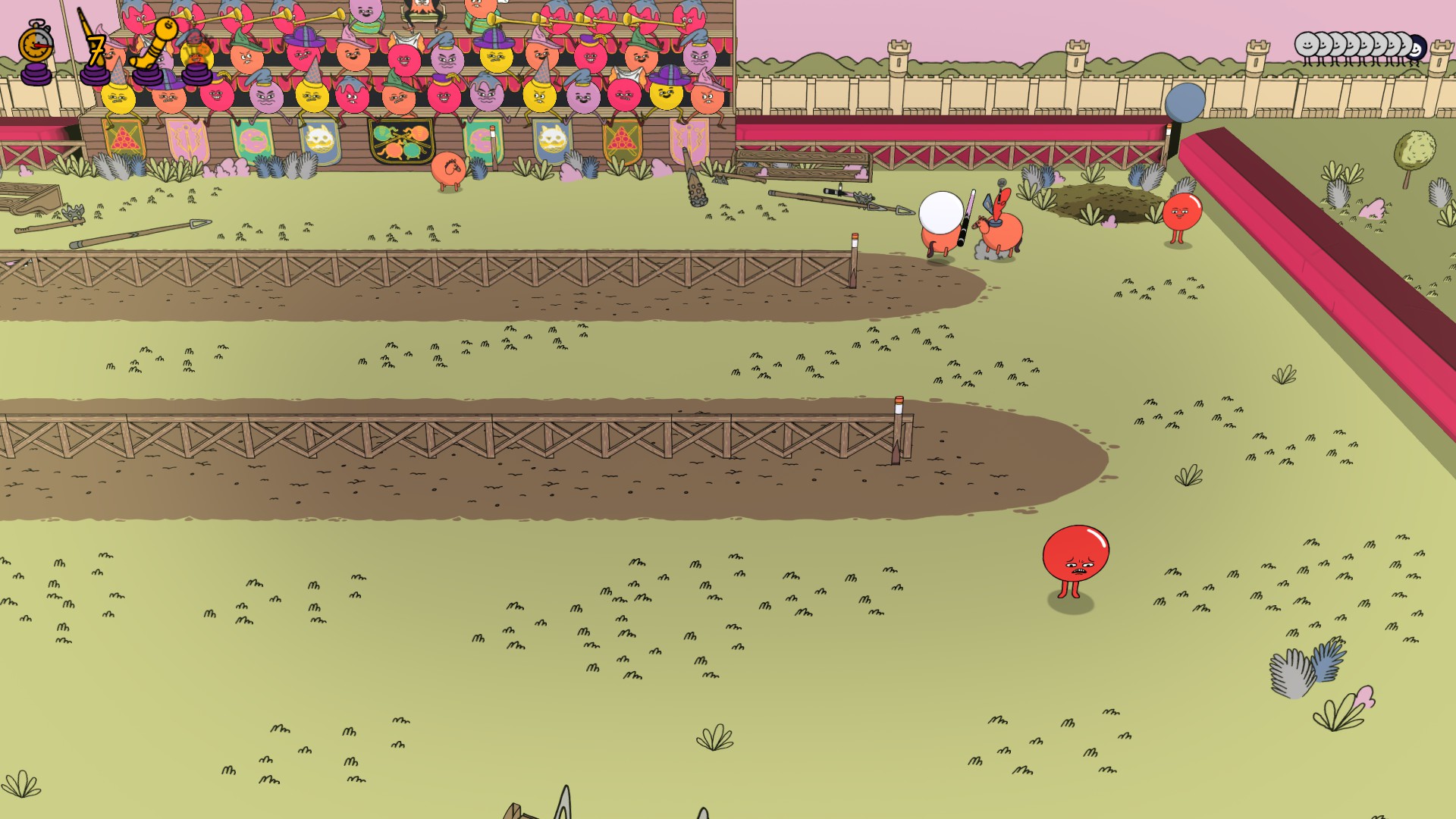 How about the controls? Well, despite having several patches, some directly addressing the controls in the game, it never feels as precise as it should. The game recommends that you use a controller over the mouse and keyboard but despite this, controlling the cue ball just wasn’t tight enough for me. You control your ball with the left stick and the pool cue with the right stick. Your character cannot turn on a dime making twitch plays nearly impossible. Beyond that, I had some isolated incidents where I struggled with depth perception (using ropes and vines) and struggled with the physics in some spots. Some objects in the world either had bad collision detection or didn’t react with the expected weight, for instance.

One of my other knocks against the experience is a lack of instruction. The game does a really poor job of communicating level objectives and mechanics to players. The difficulty ramps from the tutorial very quickly and with only “hinting cues” to go off of in some of the levels, you will spend a lot of time using trial and error to figure out your best path forward. You may be okay with that type of discovery, but this game would have really benefited from even a single word à la WarioWare to guide you in each stage. Beyond that, some instruction on how the different ball types move at the outset would be helpful. 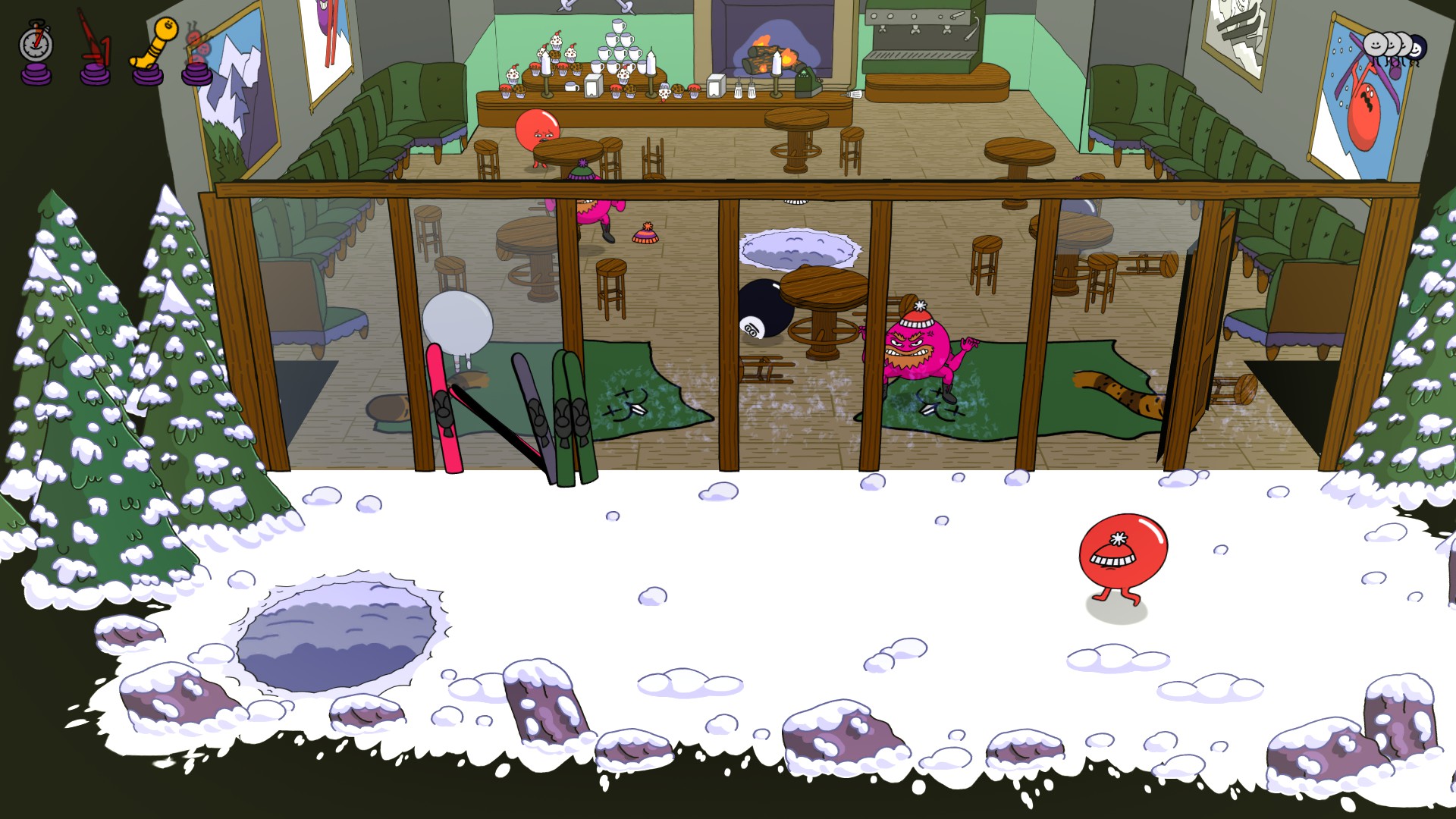 Outside of lack of instruction, I struggled with lack of direction and motivation to continue playing the game. From the outset, there’s little incentive to continue to play the game. Your skills won’t improve because of the insane variety, the game has a largely non-linear structure, meaning you can tackle most levels in whatever order you see fit and there’s no story for you to unravel or end goal beyond “making the number in the middle of the map hit 0”. There a bosses in the game, but that doesn’t save it for me.

Pool Panic does not require skill; it simply requires patience because you can brute force any level without consequence. Each level comes complete with four trophies to collect: an award for hitting under an established par value, a trophy for sinking all balls including the hidden ones, a time limit trophy and a trophy for not sinking the cue ball or the 8-ball before its time. You may not collect all of the trophies with a quick run-through, but there isn’t a a big incentive to go back and collect those trophies. 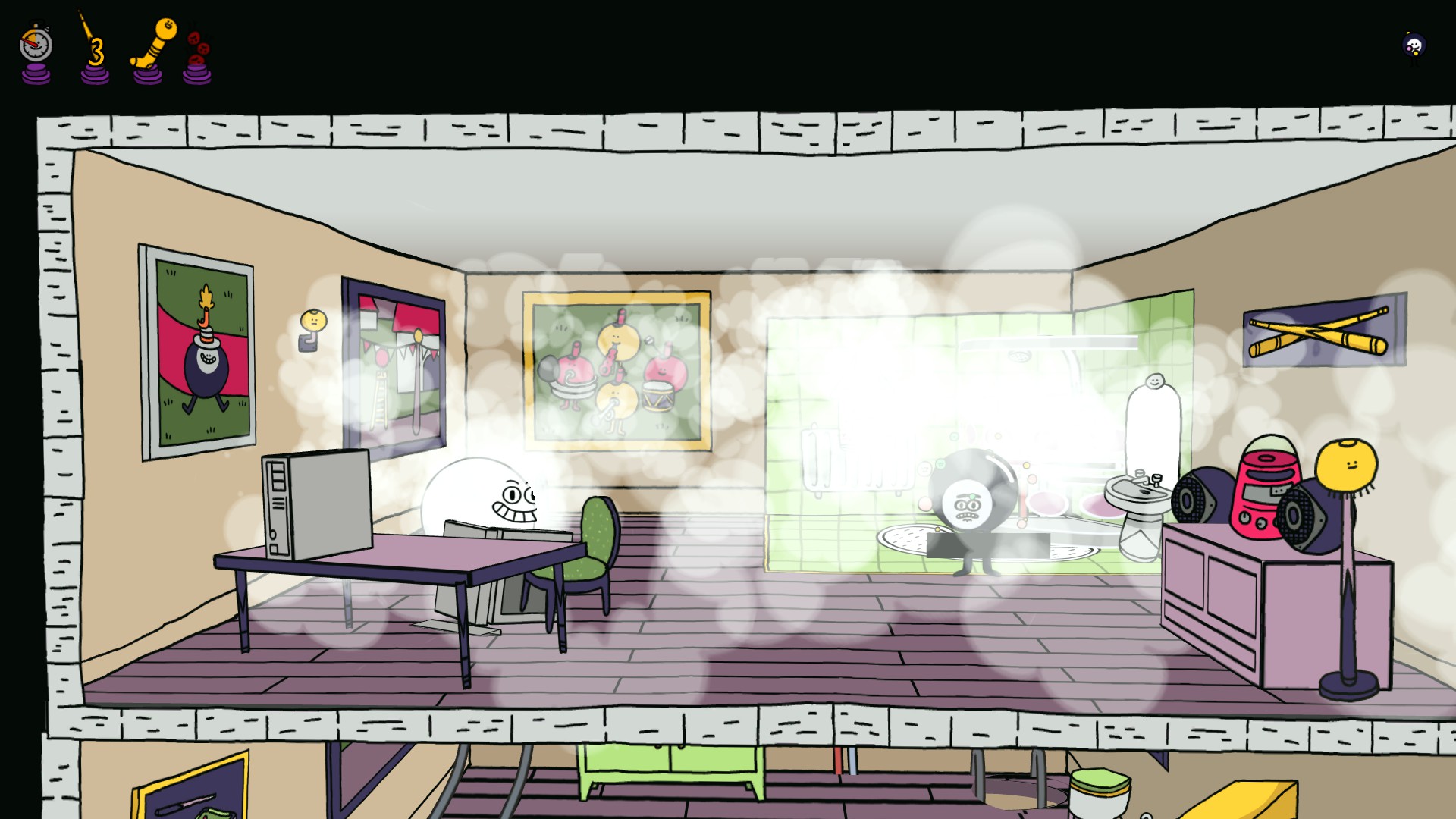 Finally, the mini-map adds no value to the game. I would have much preferred to have a simple menu with all of the levels laid out like Super Monkey Ball, for example. Like a game in the Metroidvania genre, there are sections of the map that have blockages with no rhyme or reason as to why and they require a special ball from another level to pass and there were also invisible walls preventing you from traversing the mini-map in certain ways. I personally feel like all of the work that went into making the mini-map could have been used to polish the game.

Pool Panic has an interesting look. Visually, it evokes a similar art style to last year’s Drawn to Death as well as Ren and Stimpy, King of the Hill and Beavis and Butthead. It’s cartoon-style feels deliberately rough, rushed and slightly grotesque. Outside of the level variety, the game’s art-style is probably its strongest asset. The only small caveat is that some of the enemy animations in the game don’t look great. Watching enemy character’s arms flail about in a semi-broken way will surely make you laugh, I’m just unsure it’s deliberate. 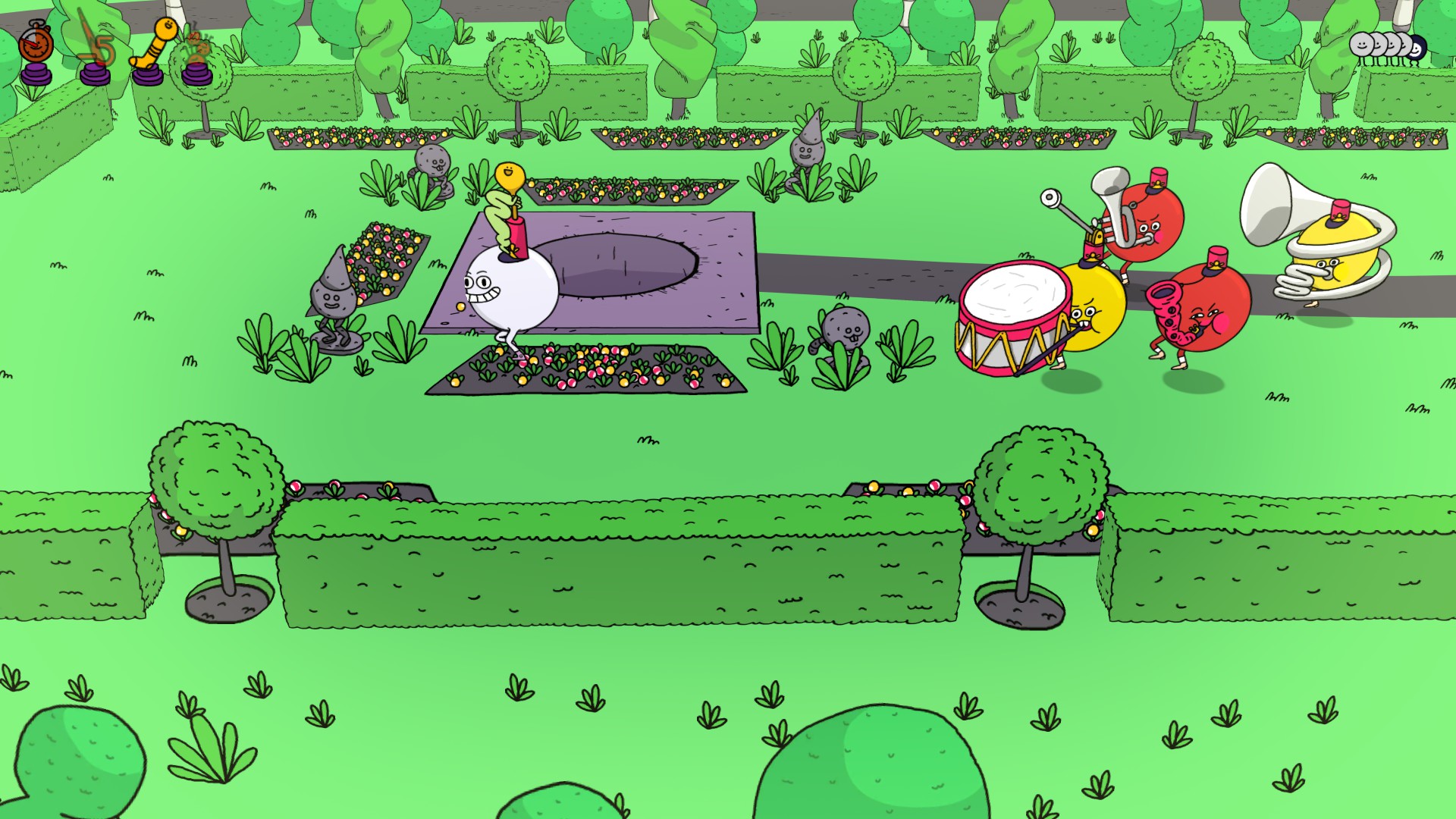 The game’s sound is another story; sound effects are incredibly annoying and the music is really hit or miss. For the sound effects, imagine a small child’s incoherent babbling: this describes a lot of the game’s sound effects. Music, on the other hand, can be clever, cute, charming or incredibly appropriate for the type of level that you’re playing, but also can be quite repetitive and grating in some instances. It varies pretty wildly.

There’s very little reason for you to keep the game’s sound above 0.

Pool Panic is a mixed bag

Pool Panic lacks a consistently fun core and gives you very little incentive to play through until the end. Sure, you can unlock a place to check out costumes, achievements and all of the in-game items, but it really lacks an intrinsic factor to keep you going. Some games make you feel great as you improve, others unfurl an engaging narrative and other just keep delivering on consistently top-notch mechanics. This game does none of those things. 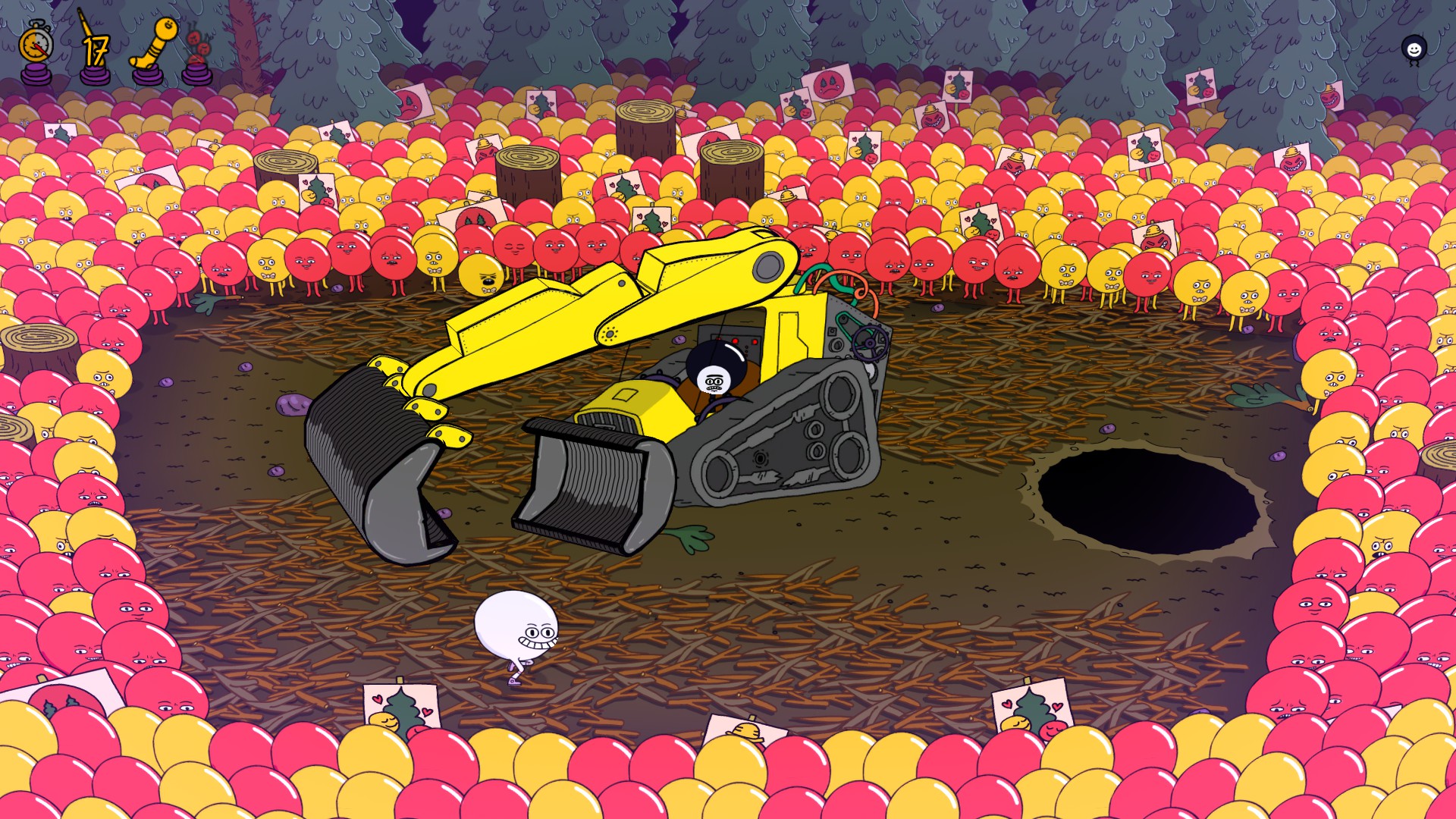 I won’t pull any punches: Pool Panic is disappointing. It’s really only because the game’s premise is incredibly unique that it manages to hit some really high points, including the unique art style. At the end of the day however, a scope that’s way too large hurts the game by making quality inconsistent, which was my biggest issue with the game and ultimately its downfall. I look forward to seeing Rekim’s next project.

Pool Panic feels like 100 game jams put into one package. There are flashes of brilliance, but loose controls and uneven level quality hold the game back from its full potential.

Mobilization in Fallout Shelter: Where the console port falls short