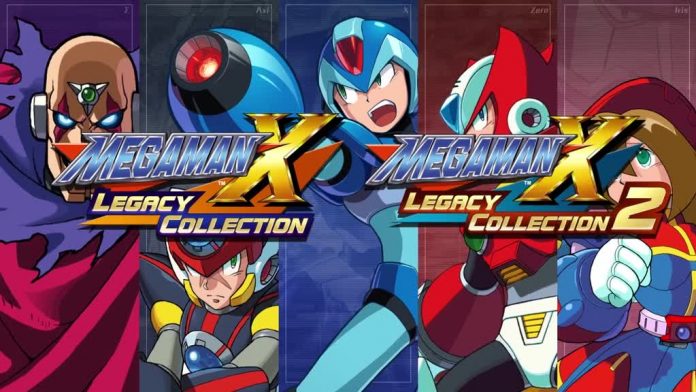 The gaming industry has seen the rise of many influential characters and icons. Anyone can name a few of them off the top of their heads, even if they aren’t a gamer: Mario, Link, Donkey Kong, Snake, Simon Belmont, Pikachu, Kirby, Samus….the list goes on. In my childhood, I was enamored with one such gaming icon: Mega Man. He’s seen many incarnations over the years, but the one I enjoyed the most was X from the Mega Man X series. Many an evening was spent in front of my Super Nintendo playing Mega Man X, Mega Man X2, and Mega Man X3. Blockbuster Video must have made a few hundred dollars off my parents easily, just from renting these games. X is one of my most treasured gaming characters, and comes from what is easily my favorite non-RPG game series. 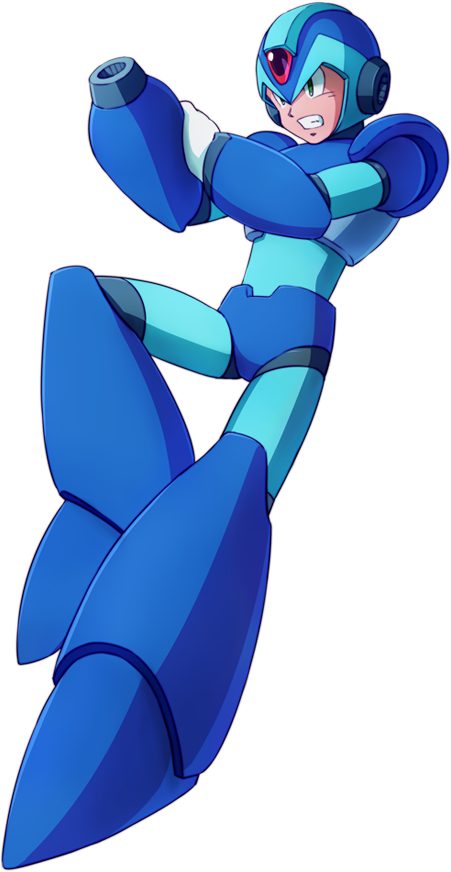 The Mega Man X series started in 1993, still deeply rooted in Mega Man Classic’s action platforming gameplay and mechanics. It took those formulas and expanded upon them to revitalize what had almost become a very stale, repetitive experience. The series had 8 main games in total. The Mega Man X Legacy Collections gather all eight games in one nifty set, four games each. Let’s go over the first collection.

First, a rundown of the story from the world of Mega Man X. To sum things up rather simply, X is a robot built with the ability to think and feel for himself. Later on, X’s design was replicated to create a new legion of robots called Reploids that mimicked X’s free will. However tragedy struck when a virus was discovered to be causing Reploids to turn against their human creators. Reploids who turned were dubbed Mavericks, and a special force of Reploids designated to hunt down and stop them was created, called the Maverick Hunters. X is one of the Maverick Hunters, and it’s his job to stop Maverick outbreaks wherever they occur. X is equipped with a powerful arm cannon called the X-Buster, which can charge up and fire blasts of super-heated plasma to defeat his foes. It can also copy defeated enemies’ special abilities, which X can then use against other Mavericks. The X-Buster is a mainstay in the series, and every game sees a different set of new abilities for X to learn and master. 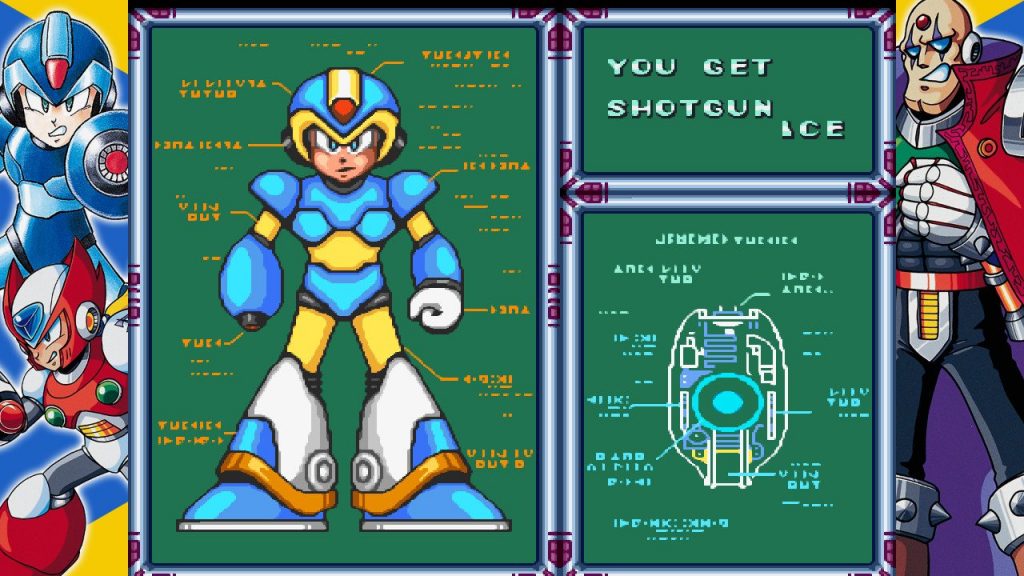 The first collection gathers up Mega Man X, Mega Man X2, Mega Man X3, and Mega Man X4. Mega Man X is widely considered to be a masterpiece in the gaming world, and generally agreed upon to be the best game in the series. It established the X series as following the Mega Man Classic formula of defeating eight bosses, but with a few new changes. First off, X can dash and climb/slide down walls. These sound like rather simple changes, but they revolutionized how Mega Man games played from then on.

Each game in this collection is a faithful re-release of the original games, and includes everything the original releases had. This means X still has the hidden Hadouken ability and X2 still has the hidden Shoryuken ability. Nothing was removed. Mega Man X4 loads much faster than its original PSX release, so that’s a plus. At the title select screen, you can toggle between the Global (Mega Man X) and Japanese (Rock Man X) versions of each game. There is also a very extensive gallery packed with extra goodies such a merchandise, music, key and concept art, and much more. The prequel short film, The Day of Sigma, is also included! 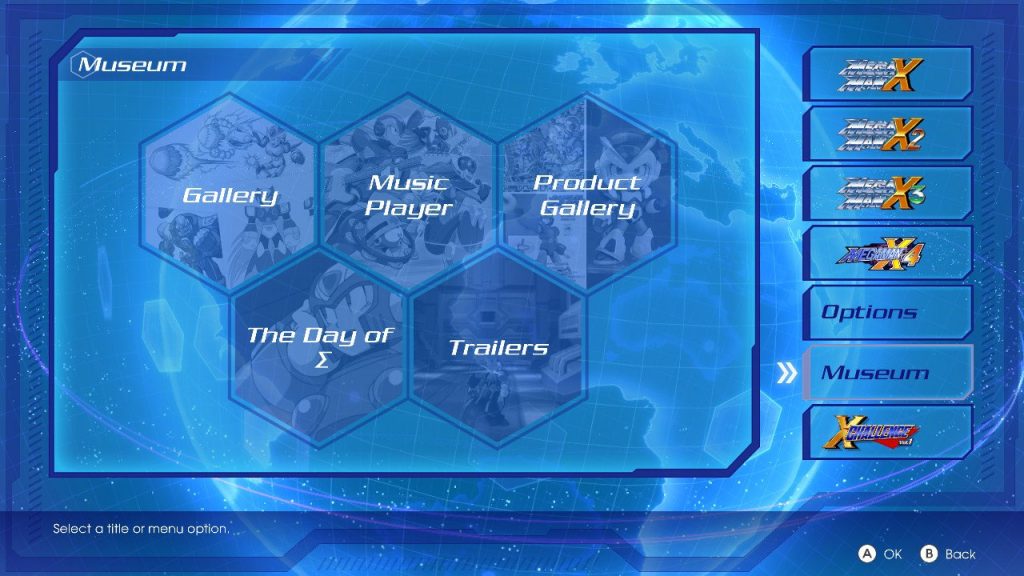 Another big feature of these collections is the inclusion of a Rookie Hunter Mode. This is essentially an easier mode for new or casual players to enjoy the games with. X and his friends deal more damage and take less damage in all 8 games if this mode is turned on, perfect for plowing through Mega Man X7 relatively painlessly.

I was able to plow through each game in roughly an hour or two with Rookie Hunter Mode on, and about 2-3 hours with it off. Each game offers a nice chuck of playtime, challenges, and things to collect, so you’ll have plenty to do if you play each game in both collections. 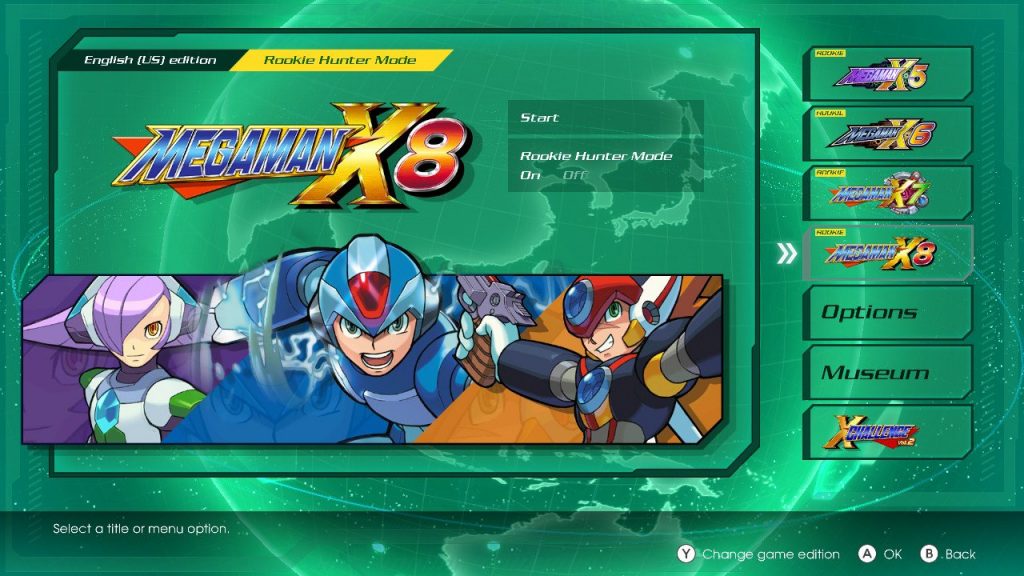 Moving on to Collection 2, it combines Mega Man X5, Mega Man X6, Mega Man X7, and Mega Man X8 into one package. Each game is a complete version of their final release, same as the first Legacy collection. X7 marks the first full 3D game in the series, but that came with a slew of problems on its own. X8 mostly corrected all of the problems X7 had, which ended the series on a decent note. No further Mega Man X games have been made yet, with the exception of Mega Man X: Command Mission – a turn-based RPG that released between X7 and X8 – which is oddly absent from these collections. Regardless, these are two very nice sets of games, even if a couple of them suffer from some quality issues with the core games themselves. 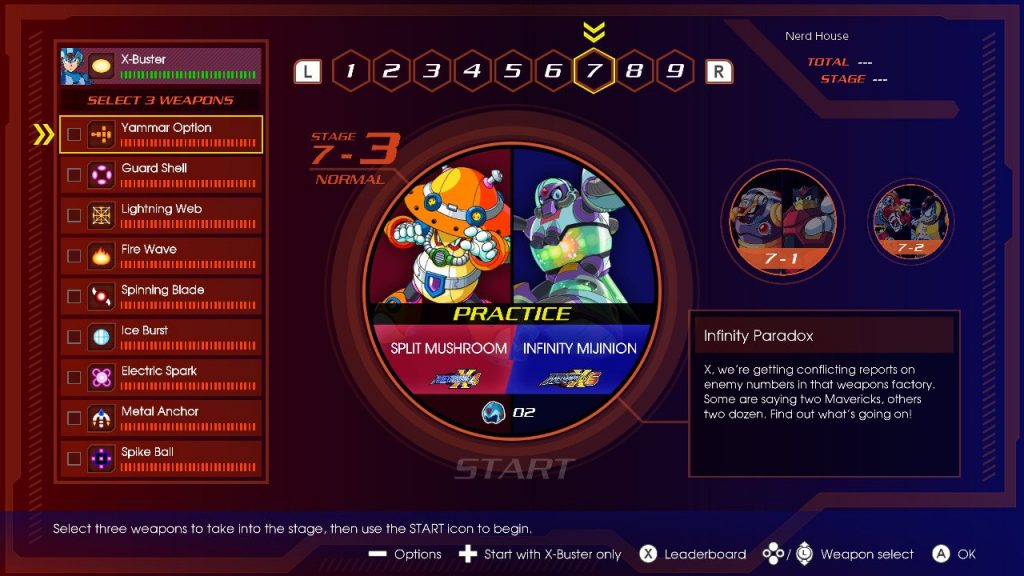 Perhaps the biggest selling point of these collections is the inclusion of a brand-new mode: X-Challenge Mode. In this mode, X is pitted against a predetermined gauntlet of foes from across the first 6 games in the X series, facing two of them at a time. This is honestly the biggest challenge I have ever faced in all my years of playing the Mega Man X series. Some of these match ups are downright UNFAIR (see image above for my favorite example), and require you to be on the very top of your A-game to defeat them. Luckily, once you complete the mode on any difficulty a Practice Mode is unlocked, allowing you to try your hand at any match up with any weapons available. 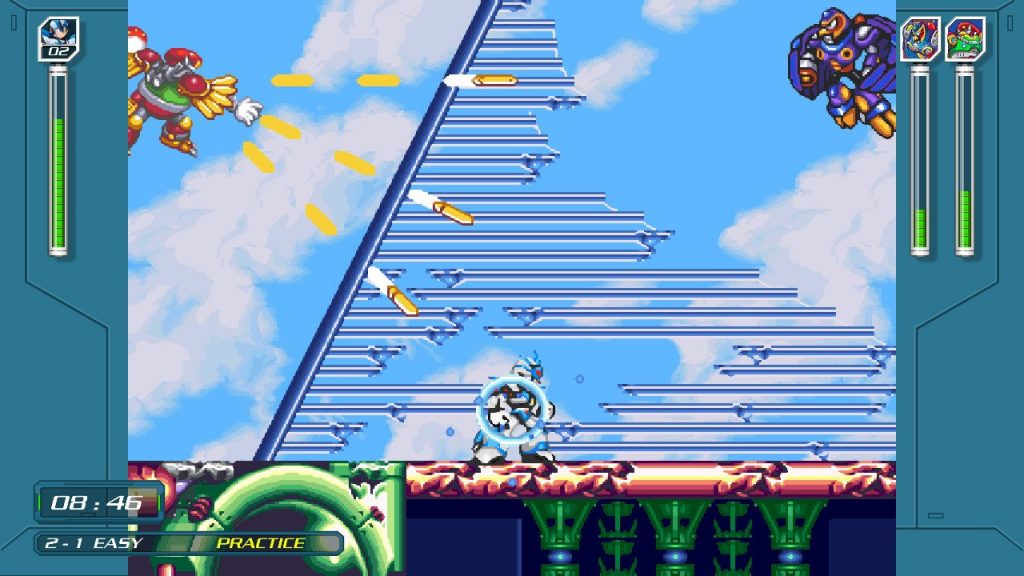 I had a blast revisiting each game in the Mega Man X series, including X7. I would consider this bundle to be the definitive versions of each title, and their availability on nearly every consoles makes them accessible to everyone. My only complaint is that Mega Man X: Command Mission was not included, but that’s a minor complaint — even though it was a missed opportunity on Capcom’s part. These collections are just a part of the Blue Bomber’s 30+ year legacy, and in my opinion an essential part of any fan’s collection.

An incredible bundle of games for Mega Man X fans and for newcomers alike. Offers plenty of challenges to complete in each title, in addition to some new features and a new mode.