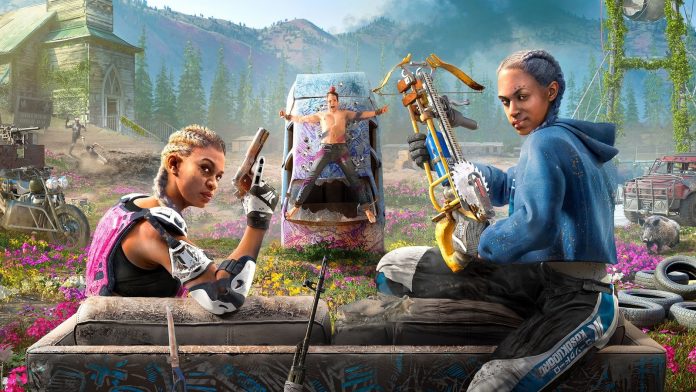 The dust and nuclear fallout had seemingly just begun to settle over the wilderness of Hope County. Just less than a year after gamers witnessed the bombs falling on Joseph Seed’s survivalist family in Far Cry 5, Ubisoft Montreal have invited us back into their vision of a quaint fictional region in Montana.

But much has changed.

Much more time has passed for the survivors of the “Collapse”. The player steps back into this vibrant world 17 years after the devastating nuclear exchange, predicted by Seed so long ago. That very same map from Far Cry 5 has become scarred, revealing new areas and making others inaccessible.

The land may have changed, but the rapid-fire, improvisational action and memorable characters you would expect from a Far Cry game have not.

The Definition of Insanity…

The Far Cry series went in a drastic new direction with Far Cry 3 and the series has been iterating on that formula ever since. Far Cry New Dawn does not set out to reinvent the wheel, not that anyone expected it to.

What gamers can expect is a vibrant open-world teeming with warring factions, natural predators and a litany of activities to partake in. Outposts that need to be cleared and treasures that need to be hunted. The treasure hunts provide a nice change of pace letting you solve some environmental puzzles for loot. However, it was a clear missed opportunity for more immersive environmental storytelling outside of conveniently placed audio logs and written notes beating you over the head with subtext.

The outposts on the other hand, keep me coming back for more and more. Nothing can compare to the thrill of ghosting an enemy compound with nothing more than your trusty bow and wits about you. New Dawn brings a new aspect to the outposts by letting you replay them with escalating difficulty to gain more resources for upgrading gear. More risk and more reward.

If you are like me and still itching for infiltration, Ubisoft has got you covered by introducing expeditions. Taking place outside of the main map, expeditions are disconnected levels meant to test your mettle in either solo play or Co-op. In fact, the whole game can be played through with a friend. If you don’t have any friends, don’t fret; because New Dawn brings back the popular “Guns for Hire” system. Each mercenary for hire brings their own flavor to your play style, each more memorable than the last. When you aren’t cruising around with Horatio the giant boar, maybe you will have octogenarian Nana laying down cover fire for you.

Of course, this being a Far Cry game, a lot of time will be spent collecting upgrading materials to make sure you can stand toe-to-toe with whatever is thrown your way.

Namely, you will be going up against The Highwaymen. Not to be confused with the country music super group, The Highwaymen are an organized army of psychotic bandits led by twin sisters Mickey and Lou. Unfortunately, Mickey and Lou rarely come off as anything more than flat villains misbehaving for the sake of providing conflict. Not nearly enough time is spent with the sisters to develop them any farther than caricatures. It is a real shame because there was potential for them to really differentiate themselves in the pantheon of video game villains. In the end, they are a far cry (hehe) from the conflicted and complicated villains like Vaas or Pagan Min that have made the series a stand out.

The story itself lacks any weight, acting merely as a vehicle to ferry players from one set piece to another. Your “character” is a voiceless, faceless void who is simultaneously the least interesting character in the game yet the most in the narrative. New Dawn even goes as far as to let you choose your gender of your character, although any choice in that regard is superficial at best, I noticed some NPCs still referring to me with the wrong pronouns in the game.

Thematically, the most interesting thing New Dawn does is explore the remnants of Jospeh Seed’s cult, Eden’s Gate. Watching how they have moved on since being proven right about the impending doom of the world is a pretty refreshing thing to see in a post-apocalyptic story. That being said, the story line associated with the cult is predictable and lacks any intended impact. Nevertheless, I can tell you that you will finally get the closure that you have been craving since the purposely unsatisfying conclusion of Far Cry 5. Sadly, that satisfaction does not come from New Dawn‘s two new baddies.

That’s not to say New Dawn is without its positives. The radioactive wasteland of Hope County is an absolute visual delight. In a series which has taken us all over the globe from South East Asia to Nepal, I was worried when it was announced the next spin-off would be going post-apocalypse. Dreading the hours spent in the hopelessly brown wilds.

Thankfully, Ubisoft went the opposite direction and set out to make one of the most vibrantly lush post-apocalypses seen on screen. The art direction should not go unnoticed as they use irradiated flora and fauna to paint a stunning picture. Think more Annihilation than Mad Max.

New Dawn still retains that classic Far Cry formula of dropping players in a beautiful open world for them to make their own. Inhabited by charming and quirky characters, dangerous enemies and secrets galore, what New Dawn may lack in thematic weight in more than makes up for. Even after finishing my play through for this review, I still find myself looking forward to my next foray through this beautiful new wasteland.

While Far Cry New Dawn didn’t present anything groundbreaking in terms of gameplay or narrative, it was ultimately the same enjoyableFar Cry experience in a new setting.