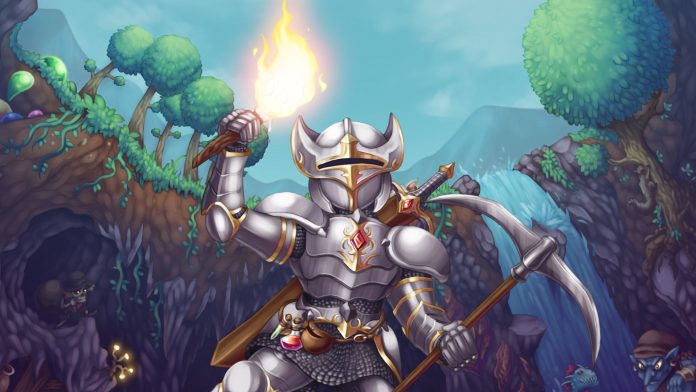 Terraria is such a deceiving little package, you would have no idea the sheer amount of content it offers upon first glance. Originally premiering on PC for the cost of a few coffees, Terraria went on to become a huge hit and has been released onto literally every modern console. There is just so much content available — so many things to do, so many items to collect, and so many things that you can build! Let’s take a look at Terraria a bit more and see why it was, and still is, such a success. 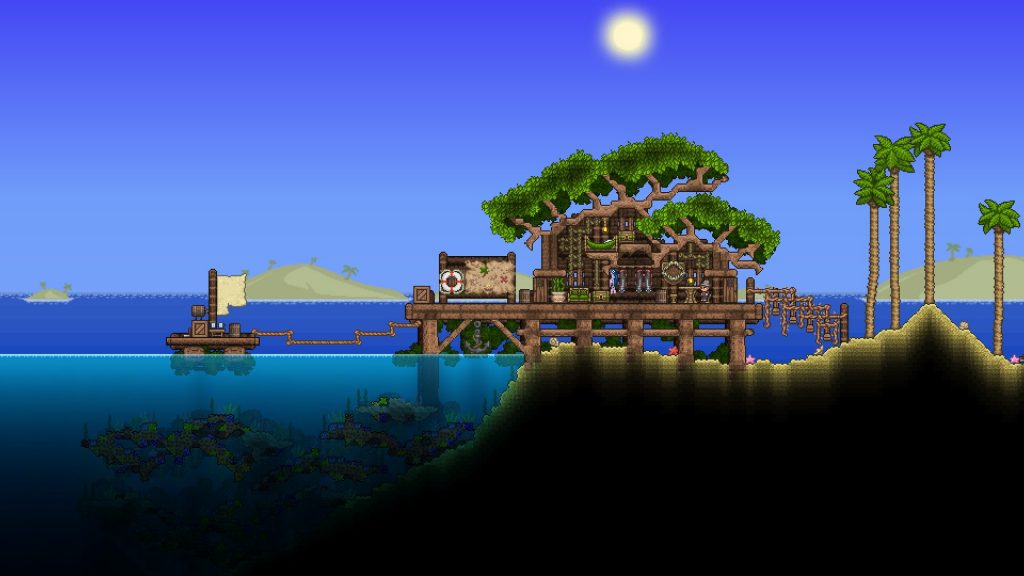 Terraria is rather simple at first. The player takes control of their created character as they are plopped down into a slightly customized, but mostly procedurally generated world with only a few basic tools to start with. Nearby is the Guide, an NPC who will give the player some starting tips to set you on your way to getting started in this new, fresh world you’ve been given. I use the word “given” because it’s absolutely astute. The world is yours for the taking, yours to explore and to do what you will. You have an absolute amount of freedom to destroy and create, to explore and to build. Life in this new world isn’t without its dangers though. You’ll soon find that you are not alone, that monsters will hound you at every turn.  At first it’s just tiny little slimes, but as you explore further and deeper into the world, you will discover even deadlier foes. And beware the fall of night; you will not want to be caught without shelter should it get too dark, as zombies and all manner or beasts and demons hunt the darkness for their prey.

I am most accustomed to playing Terraria on PC, so playing the Nintendo Switch version was a bit of a challenge for me. Adjusting to using a controller was quite a task, but it eventually became second nature to me. This is probably the biggest hurdle for players coming from the PC version. Jumping and using your items are bound to ZL and ZR, while navigating menus is bound to L, R, and the directional pad. It’s a little slow at first, but once you get used to it you’ll be zipping though the menus like nothing.

One other thing that took getting used to was actually building in the world. There is a small cursor that sort of hovers around the player character, that can be moved around with the left and right sticks. The problem is that it snaps back to your character when you release the stick, which makes building a bit of a challenge. However, there is an option to change it to a crosshair, which doesn’t snapback, allowing you a more precise building and item placement option, even if it is quite a bit slower. This forced me to take a slower, more methodical approach to building and exploring, but in the end I was grateful for it as it allowed me to take things in at a more leisurely pace. 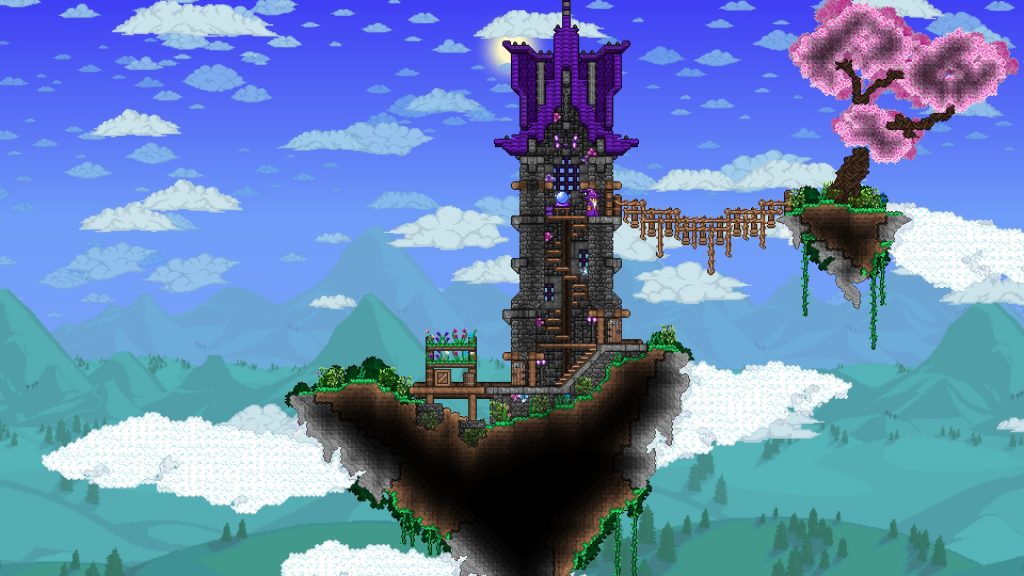 I’m not going to lie, Terraria runs beautifully on the Nintendo Switch. It has a smooth framerate throughout, even when there is a lot of action on-screen during boss fights. I found I was able to keep up with things remarkably well, even in Handheld Mode on a smaller screen. Loading the game up initially takes a minute or two, but once you’re in that’s it: no more loading whatsoever. Even when you transition from one biome to the next, there are no slight pauses or short loading times once you get into the world. This is great, as it helps to keep the player immersed in the world and focused on their creations.

As I mentioned earlier, you start off in a brand new world with literally everything available at the get-go. Using the tools you are provided, players will have to gather resources and craft better tools to progress further, as well as craft weapons and armor to protect themselves. There are all kinds of stones, ores, jewels, and more that you can create wondrous things out of, but perhaps the most important tool to keep upgraded is your pickaxe. Certain materials require stronger pickaxes to mine, making it paramount to keep your tools up to date with the best resources. Better materials offer more protection for armor, and more damage for weapons. There are also a plethora of accessories you can find as treasure hidden throughout the world, offering new options for the player to move around and traverse the world. Some accessories offer the ability to dash, double jump (and in some cases triple or quadruple jump), cling to and slide down walls, and much more. You can even craft gadgets such as a grappling hook to help make cave diving a little easier for you. 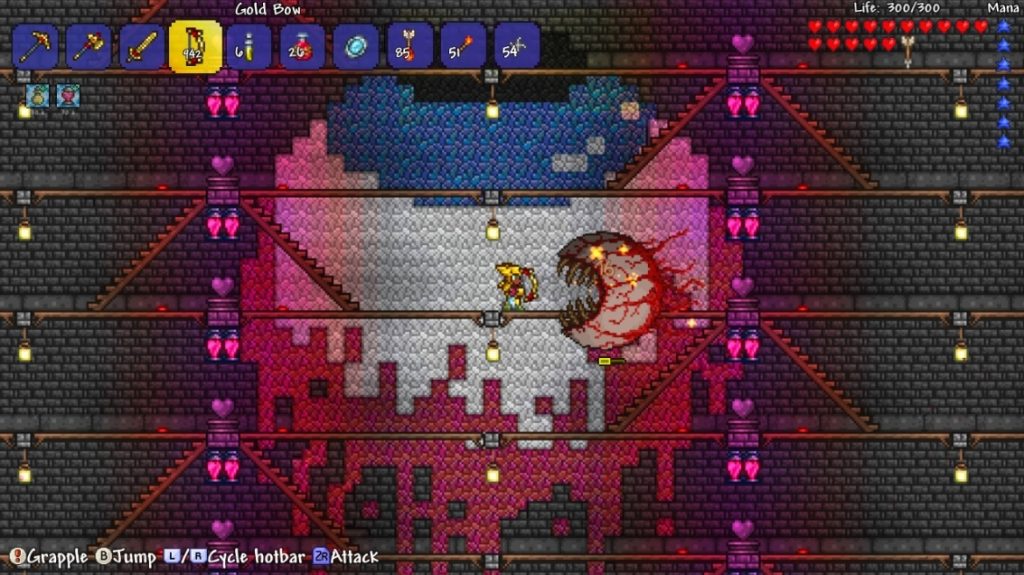 Occasionally you’ll come across even greater threats, such as the Eye of Cthuhlu, or the Dungeon Guardian. These bosses will test your skill in a variety of ways, as overcoming them allows you access to more materials and areas to explore. Use the best tools, armor, and weapons available to overcome them! There is a huge variety of bosses to test your wits and your might, and all of them are unique and challenging in their own ways. Some are fast, some spawn a lot of minions, while some are just armies of goblins and pirates marching to destroy your home.

Not into battling your way across the varied landscape? No problem, there are other activities available to you. Fishing is a great pastime that you can participate in, once you find the Fisher NPC. Each in-game day he offers a quest or two for a specific fish, and also sells you some bait. Once you have your quest, go fish up what he wants and bring it back to him for a reward. There are a few items that you can only get from fishing, making this a very lucrative endeavor to take on if you need a break. A couple of other opportunities available come as a pair, as they directing benefit each other — gardening and alchemy. Found all over the world are different seeds and herbs. If you plant and tend the seeds, you can grow a large number of herbs which can then be crafted into special potions. These potions offer a huge variety of effects, such as recovering health, making you immune to fire and lava, and even allowing you to briefly control gravity! Having a steady supply of the right potions can make almost any task in Terraria much easier. 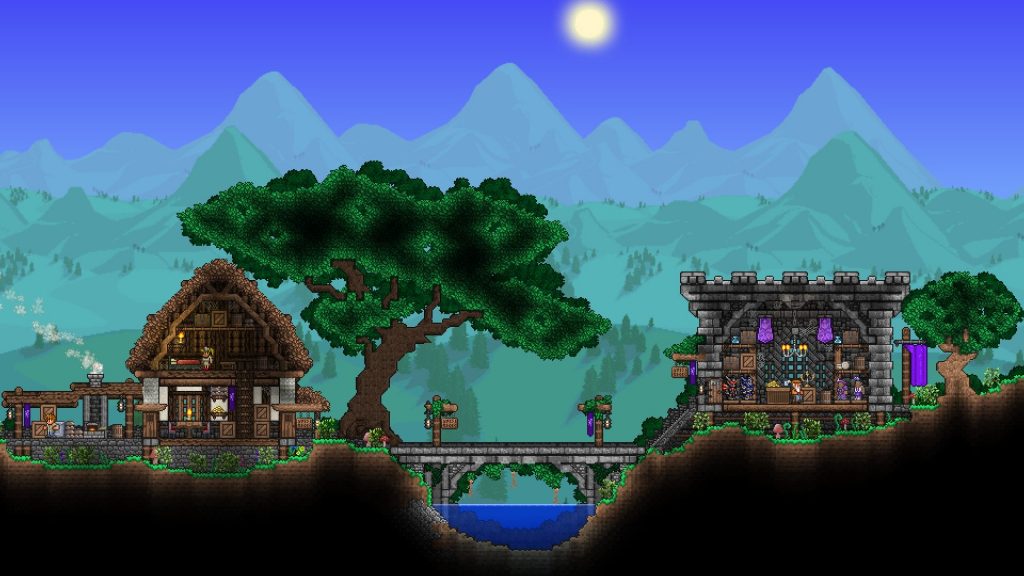 If you are a fan of creative sandbox titles, Terraria should be in your gaming library no matter what console or system you play on. It offers so much content that you can keep playing for literally hundreds of hours. Having Terraria on the go with the Nintendo Switch is absolutely amazing, as being able to hop into such a huge world and a play a bit wherever you are provides an even greater level of accessibility to the game. This is no doubt a title that every Switch owner should pick up.

You can’t go wrong with Terraria, especially with the sheer amount of content it offers. A huge world full of danger and wonder for players to explore and make their own.