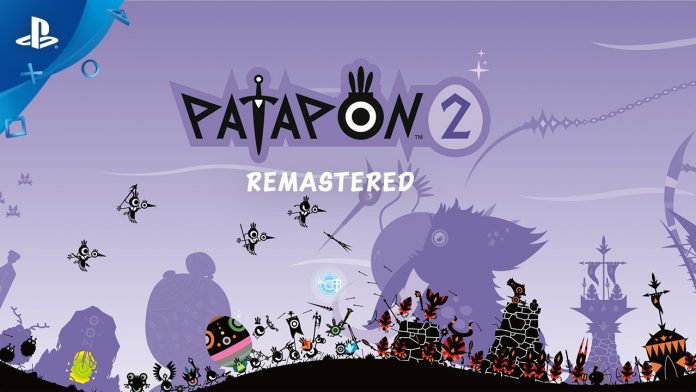 After waiting almost two and a half years, the second game in Sony’s Patapon series has been remastered for a brand new audience on the PlayStation 4. How does Patapon 2: Remastered fair over 11 years since its original release?

Patapon 2 Remastered is a re-release of a PlayStation Portable (PSP) game which was originally released in North America in 2009. The game combines the “god game” genre and a rhythm game to deliver a package that still remains fairly unique even to this day. The game opens where the original Patapon (or Patapon Remastered) left off. Your group of Patapons have built a boat in order to sail to the edge of the world. While sailing, your tribe of Patapon — a set of small, black, mostly one-eyed creatures — are attacked by a kraken. This monster destroys your ship and you wash ashore on an unfamiliar island. This island contains new foes and a new goal for the tribe: to reach Earthend, which is viewed as paradise to the group. 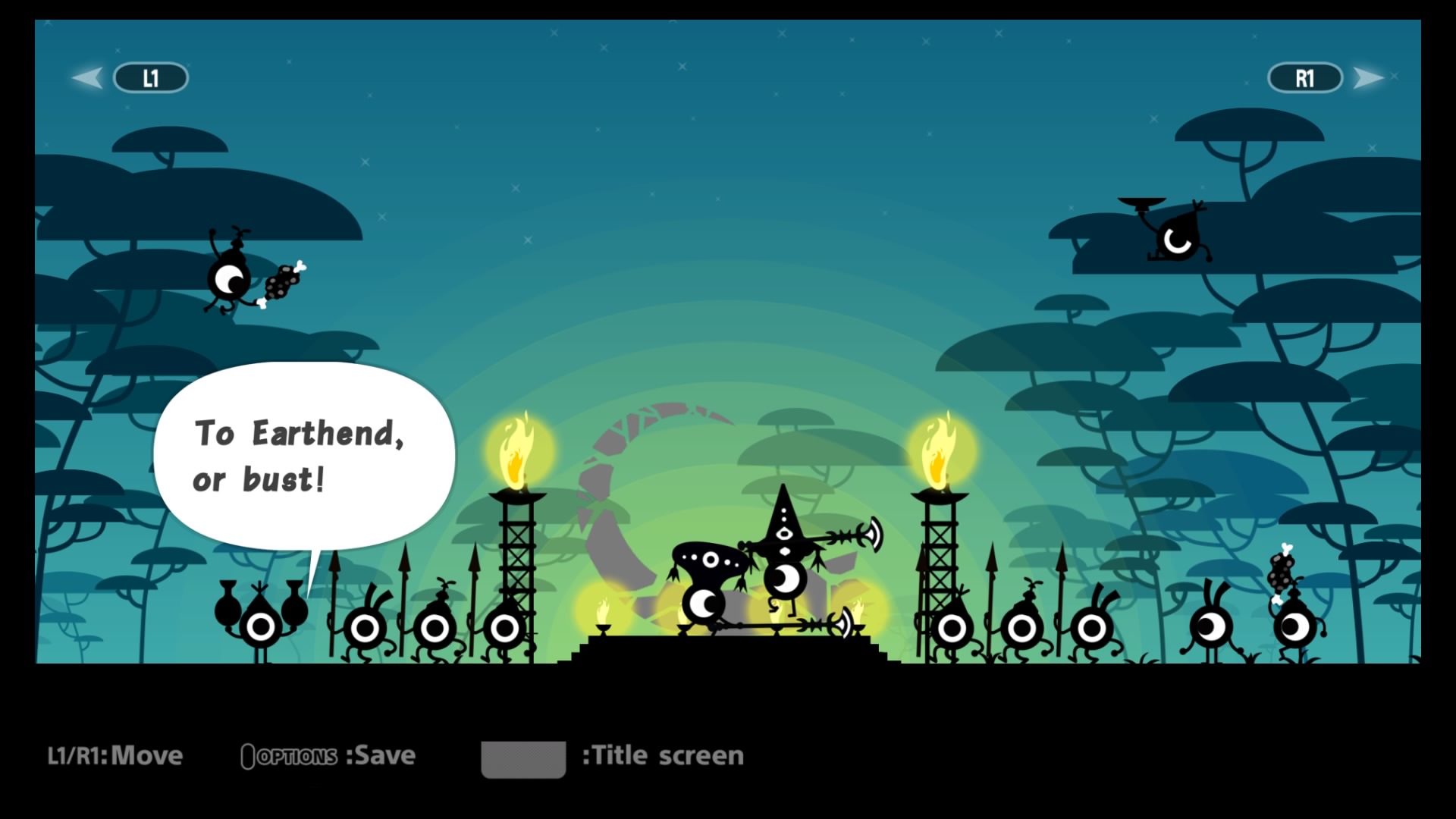 Throughout the beefy single-player campaign of this game, you will make your way through a series of three to twelve minute levels issuing rhythmic commands to your tribe of small minions in order to destroy terrain and enemies blocking you from the end of the level. Each of the game’s approximately eighty levels will test your abilities as a commander. However, most levels follow a similar structure, where your goal is to defeat all of the enemies in front of you while collecting a specific item, destroying a structure, killing a “boss” enemy, or a combination of the three.

Your army is comprised of a set of different Patapon, each with their own skills. The basic Yaripon, for instance, throw spears from a distance whereas the Tatepon can wield a sword or an axe and use a shield at the same time. Your team on the field consists of 3 sets of different units as well as a hero unit at the front of your army. The Hero unit is a new addition compared to the original game.

Beyond the different basic character classes, you can also upgrade your minions through the game’s evolution system. You evolve your minions by feeding them specific loot that you have collected on each of your runs. This loot may be an object as simple as a stone but may also be much rarer (like the fang of a defeated monster or titanium ore, for example). On top of the variety in units, you also collect weapons, shields and hero masks as well. All of these gameplay systems help provide different stats to each of your teams. These stats include HP, damage and attack speed as well as resistance to specific status conditions and your units’ ability to inflict status conditions on others or achieve critical hits.

Watching your Patapon army grow, shift and diversified into new forms was easily the coolest part of Patapon 2: Remastered. The game’s Rarepon (rare Patapon) designs are all wonderful to see. 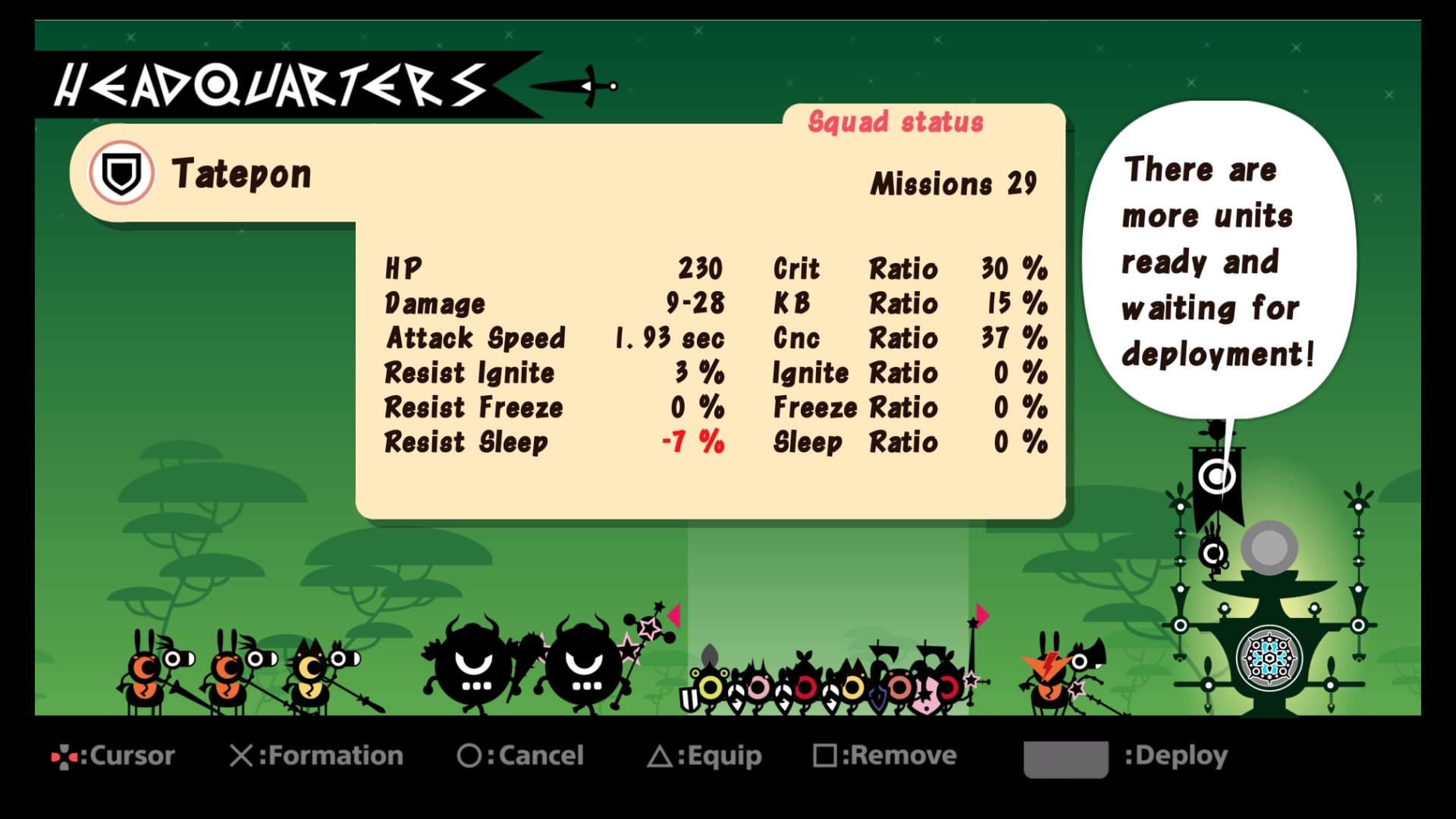 The Core Gameplay is Stale

All of these the peripheral gameplay systems stack on top of each other in a way that makes sense, but the core gameplay loop is repetitive, tedious and really began to bore me after a few hours of gameplay. The actual “playing part” of Patapon 2 Remastered essentially boils down to issuing a series a handful of four to five button commands to your armies over and over again. The entire game needs to be played on beat and you are given audible and visual cues to help you keep time. Four beats to issue commands, four beats to watch your commands be executed, rinse and repeat.

There is the tiniest shred of nuance in selecting which commands to use when and you always have to issue these commands on beat, but that core gameplay conceit is unvaried. When comparing Patapon 2 Remastered to other games in the same genre, you tend not to see the same problem because the gameplay isn’t stretched out over a 20+ hour adventure and/or other games tend to layer tons of nuance on to the actual tactical gameplay instead of just layering on nuance in the peripheral systems. The only enjoyable part of the game for me was evolving and nurturing my army, but even that has its fair share of issues.

Progression is a Grind and Your Goals are Lofty 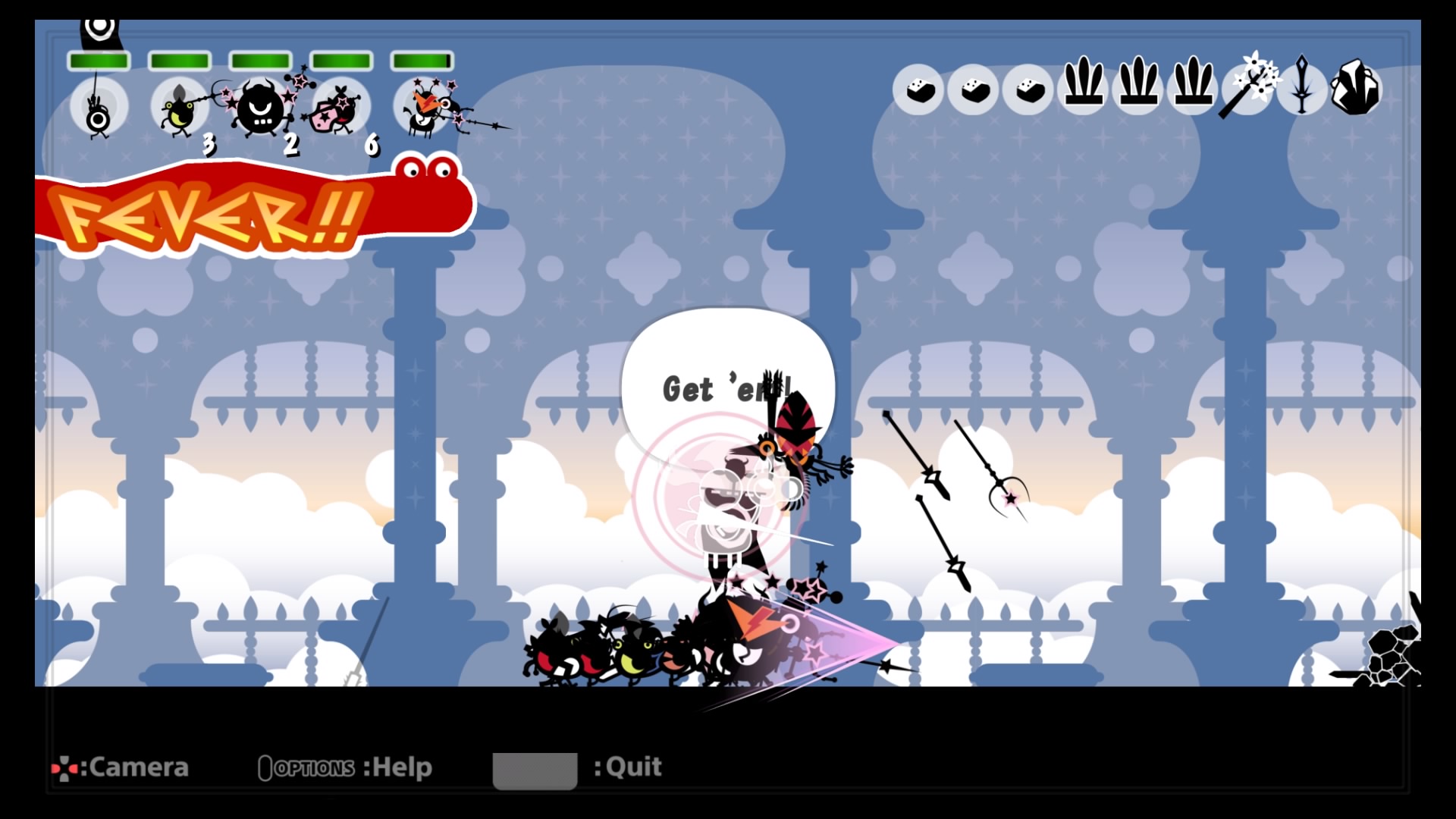 Beyond a one-note (or rather four-note) core, the progression is a grind and you have to generate your own feeling of accomplishment to get any satisfaction out of the experience. At certain points in the game, you will be confronted with a difficulty spike, usually in the form of a hard-to-beat boss battle. Usually, this will require you to go back and grind for items to upgrade your Patapon. This process is tedious and the game doesn’t give you many hints on the best ways to upgrade your team. Beyond the tedium of grinding, the end goal for the entire game is very lofty. I knew the type of game that I was playing, but without the satisfaction of knowing that my tactics were improving, that I was making the best evolutionary choices or that I was making iterative progress towards a rewarding end-goal, there was nothing hurriedly drawing me back to the experience. Patapon 2 Remastered is a grocery list, in more ways than one.

I had other minor issues with this experience. First, with the control. You do not have direct control over your army. This is a common trope in the god game genre. However, at times, being able to move your units a little forward/backward in a pinch would make the game better. Some of your units fire arrows/spears in a defined arch and when they attack, they tend to move back ever so slightly. If your commands have placed them too far forward, for example, it may take two to six attack commands to get them in the right place. The game has a tutorial for the simple things, but for the deeper systems, you are left on your own to discover their nuance. There isn’t a pause button in this game either. I presume that on the PSP, you could put the console to sleep in order to achieve a pause state, but a hard pause should have been added to the PS4 release. 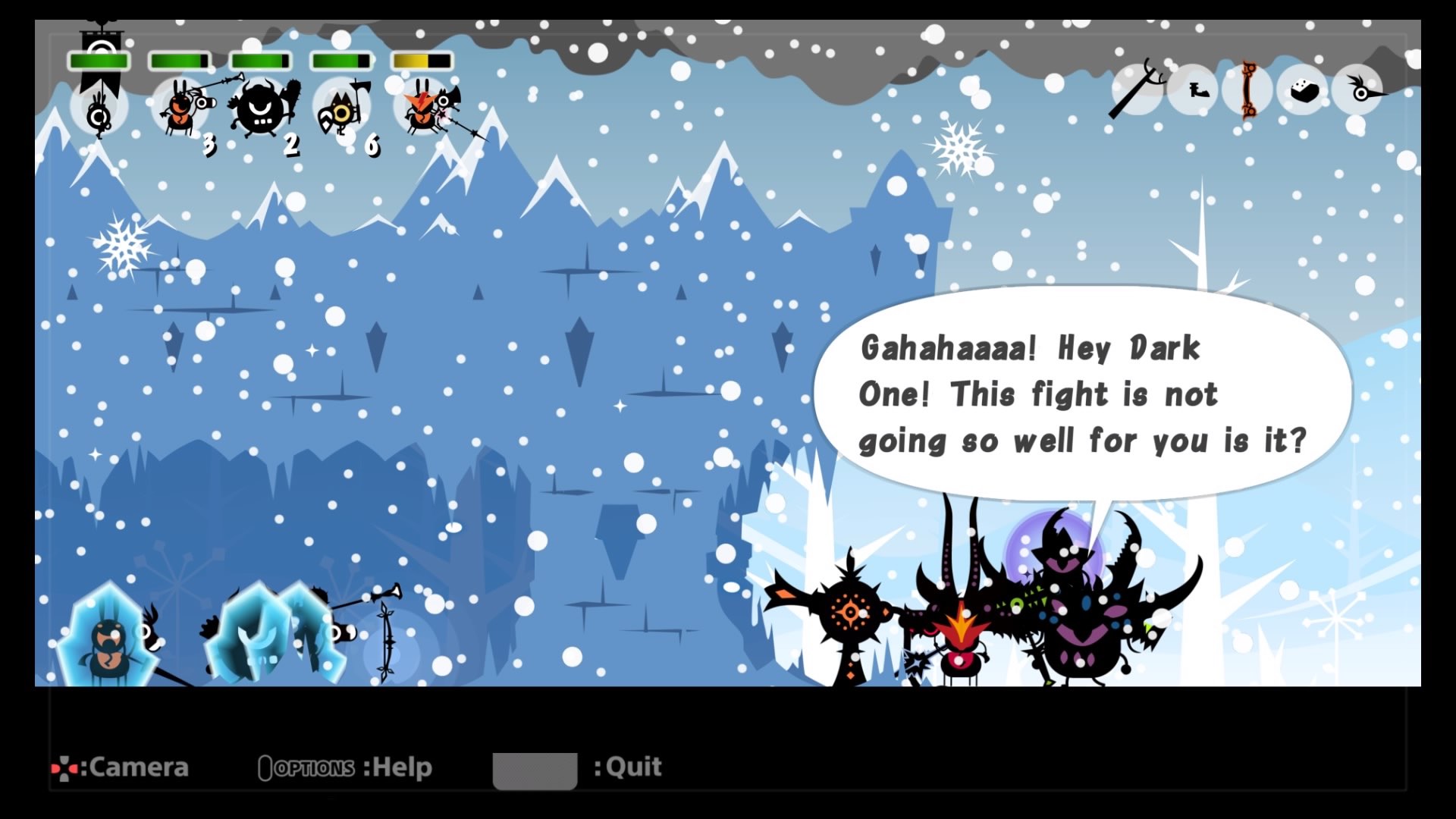 Graphics and Sound: Good (with Problems)

This game is artistically impressive. All of the character art is incredibly fun and imaginative and although the animation is done at a deliberately low frame rate for consoles, it works really well. Outside of low frame animations, there are also some low quality background textures (like the Miracle sequence background, for example). The biggest graphical problem, however, may gravely hinder your experience. Like other rhythm games that have been remastered for the PS4, input lag may be a problem for you. This could easily have been remedied through an input lag calibration tool in the options menu, but this barebones remaster doesn’t have one of those. This omission may be the biggest barrier for some players. Some people may struggle keeping a chain of commands going, which will make the game frustrating over longer play sessions. Don’t even bother playing the game via PS4 Remote Play. 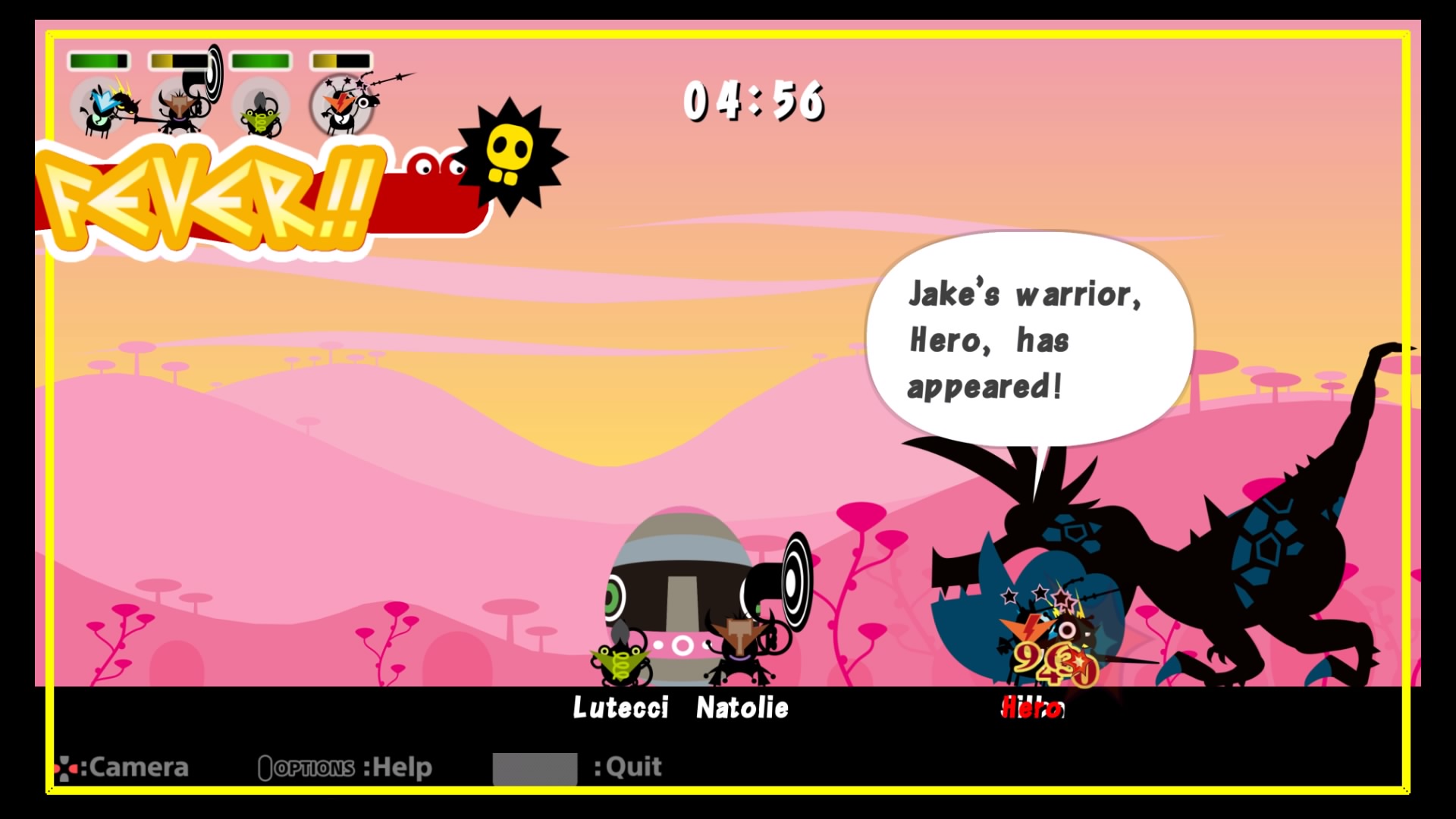 In its current form, I do not know if there is a way to play Patapon 2 Remastered in 2020 that makes it a very enjoyable experience for most players. The game requires complete focus to issue consistent button commands, so it cannot be played with half-attention or with the volume off. Your full attention will be bored for large swaths of game-time. If you can get over the rote core mechanic of pressing a small number of commands for three to ten minutes at time, there isn’t a really rewarding payoff because of the game’s casual end-goal. You may give up very quickly, however, due to the game’s input lag issue.

This game will not do anything to bring new people into the Patapon tent and may only appeal to game players that enjoy rhythm games packed with a lot of content. Patapon 2 Remastered does nothing to appeal to new players and is a really tough sell given its incredibly repetitive core gameplay loop.

Patapon 2 Remastered is a still a unique game in 2020, but the repetitive core gameplay and lack of a consistently rewarding experience makes it hard to recommend for anyone except Patapon devotees and/or hardcore rhythm game fans.