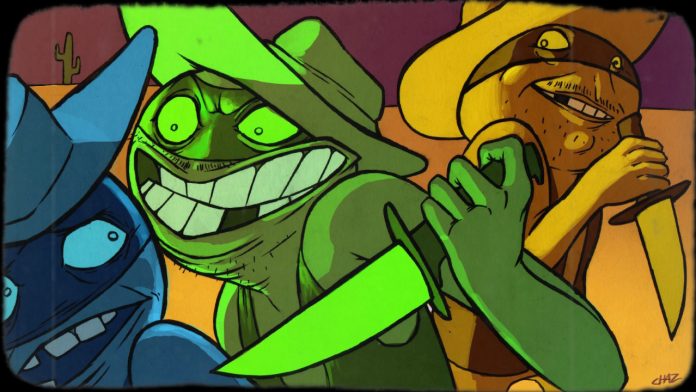 I love party games, and my partner Tara does, too. One major highlight of having friends over at our house is that we always play party games, both physical and digital. The Jackbox, Cards Against Humanity, and a niche game involving Deadpool and filling in the blanks are some of our favorites. When we got a chance to check out Rude Ghost’s Thief Town, we both subtly agreed that it is destined to be up there with the greats whenever we host our next party.

Originally created for PC in 2014, Thief Town has since been ported for the PS4 as well as mobile devices. The Nintendo Switch is but the latest port, which only helps this game feel more like a true party game: something you can hook up to the big screen or just carry around for when the need arises.

Stab Your Friends for Fun

Thief Town is a very simple game with a retro vibe that reminds me of old DOS games. There are three total modes: Thief Town, Spy Town, and Drunk Town. Each of these are essentially the same game, but with enough variety to make them all distinct. You and up to three other players are all brown-colored cowboys within a massive crowd of other, identical brown cowboys. The goal is to find and stab your opponents before they do the same to you. Overtime the fake cowboys disappear and you are slowly left out in the open. The players earn points depending on how many of the other players they stabbed, and the player to hit the decided number of points first is the winner.

It might seem like a game like this would be too simple and easy, but as each game progressed, we both learned that there’s a lot more complexity than we had initially realized. The NPCs always move in pretty much the same way. They move in a direction, pause for a moment, then move in a different direction. A good Thief Town player tries to figure out where they are on the screen, then immediately starts mimicking how the computers move.

While Tara and I played round after round, we were laughing our butts off from trying out different strategies, most of which failed gloriously. Stab random cowboys until you get lucky and stab your opponent? Turns out that just reveals where you are too easily. Run around and try to throw off the other player? That just makes it easy to lose track of where you are. Do nothing at all? If you stay in one place for too long, your character falls asleep, immediately revealing where you’re hiding.

The Finer Points of Stabbing

The main menu is the most unique thing about the whole game. You organize your players in your typical Old West tavern, where interacting with the patrons changes a setting. For example, stabbing the guy at the piano toggles the music, talking to the guy underneath the cow skull changes the game mode, and interacting with the wanted poster changes the number of points needed to win. When we first started up the game, we found ourselves trying to see what everything did right away. I’ve never seen such a fun way to change a game’s settings!

Once you’ve given yourself a name (pressing the A, B, X, and Y buttons in any order), you’re ready to exit the tavern and out into the wonderful world of killing your friends. As I mentioned before, there are three game modes, and you can play only one during the course of a game or a random combination of all three. Let’s go over each one in greater detail.

This is the simplest one. All you have to do is wander around each screen (which changes per round) and find your opponents hiding among your look-alikes. As time goes by, more and more fakes disappear. Once you do find your enemy, stab them and they’ll bleed whatever color represents them. Once you’ve been stabbed, you can’t do anything other than run around wildly for a few seconds. However, there are rare times where you might stab someone at the same time that they stab you, and you both die. The player who stabbed the other first gets more points. There are also times where a giant tumbleweed will come along and try to crush you, and if it’s successful, it gets the points instead of the players. When we first saw that happen, we laughed out loud.

Like Thief Town, you have to be the last cowboy standing. However, the players are now unbalanced. One player is equipped with a gun and can fire in a straight line, killing all cowboys that fall in that line. The others can’t stab, but they do have the ability to fall on their face, which we couldn’t exactly figure out the point of such a mechanic. Either the “sheriff” has to eliminate the other players, or the players have to run out the clock. This one we found a little confusing and not exactly as much fun.

Spy Town is easily the best of the three game types. This one functions like Thief Town with the added mechanic of each player getting a random weapon they can use only once in addition to their dagger. Some of these include a dynamite plunger that blows up all the cowboys in an area, a rope that obscures a section of the screen, and a teleportation device that kills a random number of fake cowboys while also moving you to a random place on the screen. The match-ups of weapons make each round unique, and we found ourselves trying out crazy strategies to win depending on what combination of weapons we got. Once we discovered Spy Town, we played it exclusively and had a ton of fun with it.

Now, despite how much I’ve praised the game so far, it certainly has its downfalls. First and foremost is that it feels like only a small part of a much larger game. Tara noted that it feels more like a minigame that should have been in Stardew Valley or the like. We also found that while you can get a lot of enjoyment out of Thief Town, there just doesn’t feel like there’s enough content. Perhaps future updates of the game could change up the formula in new and different ways, like how new iterations of Jackbox games implement new surprises to keep things fresh. Since Thief Town is an indie game, this might be asking for too much, but for an 8 dollar price tag, the price seems a little high for what you get.

Thief Town is so much fun. Especially while playing Spy Town, we were laughing so much over the dumb ways we caught each other. The best kills were the ones that were totally by accident or through sheer dumb luck. We had a great time playing round after round, and it never really got stale. That said, we both agree that there’s not quite enough content to warrant the price tag, at least for the Switch version. Though if you can get the right interested friends and have a 4-way free-for-all, then perhaps the price will be more worth it.

While not the most content-heavy game in Nintendo’s indie library, Thief Town certainly offers up plenty of laughs amidst the zany and chaotic gameplay.

A review copy of this game was provided by the publisher.