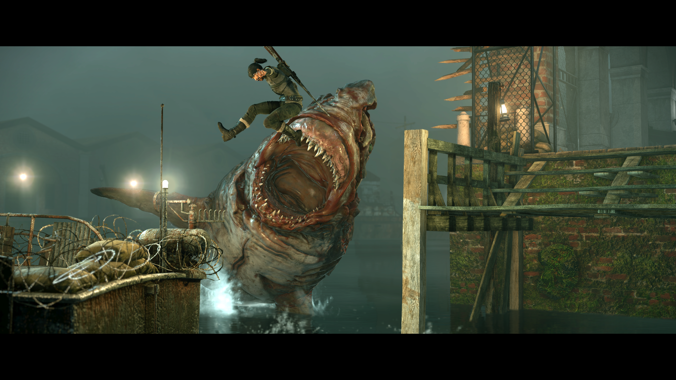 Heads will fly, with a little help from my friends.

From its humble origins as a spin-off of the tactical shooter Sniper Elite, Zombie Army 4: Dead War rises as a fully-fleshed re-imagining of the undead project. It’s a chaotic and fast-paced cooperative shooter, and a far divide from the much more slowly-paced tactical approach of the previous games. While there is still a substantial focus on sniping, and of course that quintessential cinematic X-Ray killcam, the pacing, combat, and overall structure has been completely re-hauled into something new and exhilarating.

I feel like I should start this review by saying that you need to bury, or burn, all of your pre-concieved notions of Zombie Army before walking into Dead War. The game stands, or shambles, on its own two legs without needing to rely on Sniper Elite any longer. Where the fist games suffered some issues with pacing and over-repetitiveness of the gameplay loop, Dead War is a multi-faceted and much more nuanced experience. While it still builds off of the skeleton of Sniper Elite, Zombie Army 4 actually has a lot more in common with other squad-based zombie shooters than it does with the seminal series. Learning from their experiences with Strange Brigade, Rebellion has created a much more involved and content-packed experience.

Stepping into Dead War after having spent a fair bit of time with Zombie Army Trilogy was a complete and unexpected surprise. Whereas before you spent much of the game finding a spot to line zombies up like a shooting gallery, repeating the cycle almost ad nauseam, we are now treated to a robust experience that had me constantly thinking on my toes. Secondary weapons and sidearms are no longer sidelined in lieu of your rifle, but an absolute necessity for navigating your way through the onslaught.

And when I say onslaught I am very serious. Dead War kept me on my toes constantly, changing positions so I wouldn’t get cornered or scrambling to find med packs and ammo to sustain combat against seemingly unending tides of the undead. Playing solo this sometimes became exceptionally frantic, whereas with a party it was much easier to cover each others’ backs and ensure no one got surrounded. The game is definitely meant to be played cooperatively, and even though it scales the amount of zombies to the amount of players, I found that it was a bit unbalanced for a single-player at times. This led to me having to constantly rout zombies and made certain instances — such as killing zombies to activate a Blood Fountain — very hard to manage on my own. While this enticed me to play more with other players, I still feel like the pacing could be scaled differently to allow more accessibility and less frantic chaos for those who opt to play solo. It just felt like during certain areas it was constantly teetering between challenging, and this is a bit much.

Zombie Army 4: Dead War takes place after the events of the Zombie Army Trilogy, when a group of volunteers known as the Survivor Brigade — led by veteran sniper Karl Fairburne from Sniper Elite — continued the war against Hitler after he enacted Plan-Z from his bunker and raised his legions from the grave to ravage Europe. Dead War picks up after Hitler was banished back to Hell, but the dead are still roaming Europe in numbers that are growing exponentially. You’ll travel throughout Europe, from Venice to Vesuvius, and even to the Gates of Hell once more.

While it’s not the most visually striking game — it’s a very dark, stormy and overall grey setting — the amount of detail that has been put into set design makes up for the slight lack of fidelity. The settings in Dead War are superbly done, and each environment does a splendid job of evoking a horror-filled atmosphere. Every chapter has received a substantial amount of detail, and many levels have tucked away areas that are just begging to be explored. Sometimes heading off the beaten path will net you a collectible or weapon upgrade, and other times you’ll stumble across a grim set piece, or a terrifying doll. Seriously…these dolls are going to haunt my dreams more than the zombies after playing this game.

The things that we loved about Zombie Army have returned though, and it wouldn’t be near as exhilarating an experience without the classic cinematic X-Ray killcams that highlight the best kills in spectacular fashion. You’re able to change the rate of occurrence of these killcams as well, so when playing solo I love to turn them up to “often” to make every several kills an epic brain-buster. The killcams even occur in multiplayer — albeit sped up substantially — and the game will even show you one of your teammates’ kills if its stylish enough.

Where Rebellion did pull out all of the graphical stops was in their gorgeous cinematic kill cameras, which were absolutely stunning on the Xbox One X. You’d be remiss if you just went for headshots the entire time, even though that’s what you may reflexively do against the undead, purely because you would be missing out on all of the awesome exploding anatomy. Have you ever killed a zombie by shooting them in the testicle, because I have.

Zombie Army 4: Dead War has a total of nine missions, each with four chapters that are separated by conveniently located Safe Rooms which let you restock and take a breather. It’s an absolutely massive game, with each level taking between 2-3 hours typically depending on how you play. Once you hit a Safe Room you can change around your cosmetics or upgrade your weapons if you have any Upgrade Kits, which are obtained by completing challenges, getting Gold medals in chapters, or finding them in the levels themselves. There are skins and weapon charms for each weapon, all of which can be unlocked by increasing your Slayer rank.

You level up your Slayer rank through your overall performance, which is bolstered by completing chapter challenges and finding all of the collectibles. Ranking up unlocks new cosmetics for your guns, as well as new melee attacks, item mods, and Perks which can be used to augment your preferred playstyle. There are offensive, defensive, and utility Perks, which you unlock initially by reaching the required rank. From there, you can upgrade those Perks by completing certain conditions with them active.

There are four characters, as well as two DLC characters, that you can choose to play with. Each character has their own preferred combat style, so it’s smart to pick one which lines up with your preferred method of undead-dispatching. My preferred character Jun has faster movement and lower stamina costs for sprinting, which allowed me to stay mobile and find new vantage points much more easily. Each character also has special headgear, emotes, and taunts which can be unlocked through completing challenges, or leveling up your Slayer rank.

It’s a game that rewards you for playing, and for playing well. The better you do, the more you explore, and the more you play overall, the more you’ll unlock. It’s a wonderfully enticing system, which rewards the player for focusing on their playstyle. It really shows how far the series has come, and how much Rebellion has learned from their previous forays into cooperative shooters.

As you have probably surmised by now, there is a lot to do in Dead War, and completionists will have no shortage of collectibles to obtain and perks or cosmetics to unlock. Every chapter has five different Collectibles to obtain, and a chapter-specific challenge that will net you an upgrade kit to boost one of your weapons.

There are also bi-weekly challenge missions which unlock exclusive emotes and skins, so absolutely no shortage of things to do once you’ve made your way through the game’s nine missions and four Horde maps. Did I mention there is also a Horde mode, because what zombie game would be complete without one? Building off four of the game’s locations, each Horde map pits you against waves of the undead as usual, in a goal to survive the longest and kill the most. It’s not as thrilling as the campaign and feels somewhat lackluster at points, but with friends it was an enjoyable digression from the main storyline.

Similar to the campaign, you’ll not only face off against the waves of undead infantry, but some of the more sinister elements of Hitler’s Z Army. Cement-saw wielding behemoths, zombie suiciders, and my personal most-hated, the love Flametroopers who are keen to light you and your party up. They’re all welcome additions to the fray, and often cause you to switch your strategy up on the fly to relocate away from their seriously damaging attacks.

Priced just under the cost of a typical AAA game, there is a lot built into Dead War for its price point, so I can comfortably recommend this game to anyone concerned about getting their “money’s worth.” It’s an entertaining journey on your own, and an absolute blast if you’re playing with friends and working together to stylishly stem the tide of undead.

Zombie Army 4: Dead War has grown into something more than a Sniper Elite expansion, and the fourth installment of the title has brought the series to new heights. While the gameplay loop can get a bit repetitive, this is easily the most fun that I’ve had killing zombie in a cooperative shooter in years, almost hearkening back to the days of Left 4 Dead. With the addition of so many collectibles and challenges, and a substantially sized campaign, there is enough to do to keep even the most avid completionist occupied for dozens of hours.

While it stumbles a bit as a single-player game, Zombie Army 4: Dead War is a stellar cooperative shooter with a ton of content that has brought the series to new, gory heights.

The review copy of this game was a digital code provided by Rebellion Developments.