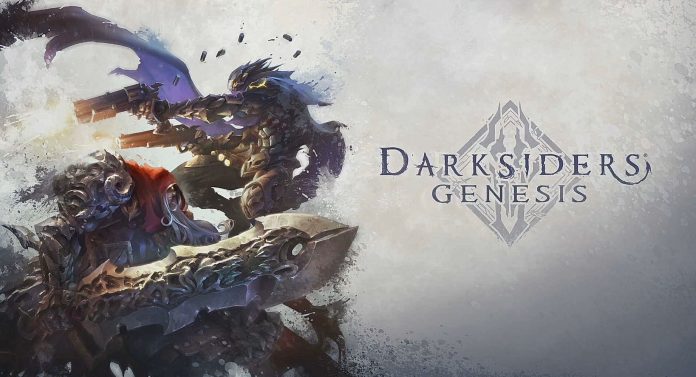 A Hell of a good time.

One of the spectacular aspects of the Darksiders series is that no game has followed directly in the footsteps of its predecessor. This of course relates in part to the changing of developers over the years, but it has created a very unique progression in the series. Where the first game was a strict action-adventure, the second iteration saw the series take on much more RPG elements, before evolving into a slower pacing and more punishing combat with Fury’s appearance in Darksiders 3.

In keeping with this trend, Darksiders Genesis is an excellent digression from the core series, which introduces the final Horseman Strife, along with a completely different gameplay structure than we’ve seen before in the series. Genesis treats players to a top-down roleplaying game which features fast-paced yet measured combat, as you travel through Hell alongside your brother War. Featuring a colourful cast and entertaining narrative, Darksiders Genesis is an absolutely spectacular entry into the series, especially for those who have been following the story. That being said I would still wholly recommend this game to newcomers to the series, who would no doubt be enticed to see what else the Horsemen have to offer.

Genesis follows Strife and War on their latest mission from the Council, separated from the other Horsemen Fury and Death. The narrative is absolutely excellent, pitting the Horsemen against the Masters of Hell in a quest to uncover the plots of Lucifer, who is still bent on eradicating humanity. The game is host to a phenomenal cast of, well, mostly demons; a couple of whom you may remember from previous games.

While the dialogue has always been entertaining in previous Darksiders games, the addition of the wise-cracking Strife is an absolute boon to the narrative. I don’t think a single other game in the series has had me legitimately laughing out loud on multiple occasions, and the back-and-forward between the two brothers easily constitutes one of my new favorite in-game relationships.

Strife and War are an excellent duo on the battlefield as well, and while it’s possible to play the game single-player, the experience is much more entertaining with a friend. You can play Genesis in either local split-screen or online co-op, and inviting a partner is as easy as finding one of the Summoning Stones that are typically at the beginning of each chapter. For the most part online co-op was exceptionally smooth, with occasional hiccups that we can almost assuredly chalk up to network issues and not the game itself.

You can freely switch between the two characters while playing solo or in a team, but if you are playing single-player you will need to do this occasionally to take advantage of the different skills that each Horseman has. As you progress through the game, Strife and War will unlock special abilities that are used to solve the puzzles which are scattered throughout each levels. Most of these puzzles are rather straightforward once you have obtained the necessary skill, but some of the optional trials had my partner and I scratching our abyssal heads trying to figure out how to solve them.

Combat in Darksiders Genesis is thoroughly satisfying. One of the most exhaustive aspects of typical top-down hack and slash games is how tiresome the combat gets after a while. This couldn’t be further from the case in Genesis, and it feels like they have fluidly transported the combat from the core series into the new game. Fighting the armies of Hell feels impactful and measured, and even though you only have two basic attack buttons, the combinations that you can unlock creates a very diverse array of attacks.

This is in addition to the three skills that you can unlock, each with their own important uses in combat. I typically played Strife while my partner took on the more melee oriented War, and my skills all allowed me to help control the battlefield. Strife’s clone laid down cover fire while distracting enemies, while dropping some explosive caltrops helped me to maintain distance and continue to lay down cover fire for War. Using your abilities requires Wrath, which you build up by defeating enemies and finding Wrath shards throughout the levels.

Combat is also gorgeous, and every little animation is clear without getting lost within the melee. Both Strife and War have special execution animations for each type of enemy, which can be activated once an enemy’s health has dropped to a certain point. These serve as some of the best action sequences in the game, and performing a stylish finisher never lost its impact throughout the entire game.

That being said, the entire game looks wonderful and we constantly found ourselves stopping to stare out over a vista; not something that I can say I would typically do in a top-down game. Airship Syndicate has put painstaking work not just into the environments that you’re treading, but have included beautiful backdrops which one can’t help but stop and admire. It’s one of those games where everything not only looks great, but feels perfectly suited to the atmosphere and gameplay.

Darksiders Genesis also introduced a new combat augmentation system which uses special items drops by enemies called Creature Cores. These cores are slotted into an specific sections in your Core Slots and apply various effects and boosts to your health, combat, or wrath. Enemies will drop these at random, and each core can be leveled up through collecting multiple versions of it, or occasionally purchasing them from Vulgrim.

In addition to their basic abilities, and combat augmentations, both War and Strife eventually unlock the ability to transform into their alternate forms; Chaos Form for War, and Anarchy Form for Strife. These transformations are used by filling the requisite gauge, allowing both characters to unleash devastating attacks to decimate all but the strongest enemies.

Like any good top-down RPG, there is a wealth of loot to find, much of which takes the form of souls; currency that you can spend at your old friend Vulgrim’s shop. Veterans of the series will remember the demon shopkeeper from all previous games, always keen to exchange souls for new abilities, combos, or items. You’ll also meet another demon named Dis eventually, who will exchange souls for upgraded abilities for the Horsemen. A colourful addition to the cast, Dis’ is enslaved to Vulgrim and looking for a way to pay back her debt through helping the Horsemen.

Most items don’t just cost souls however, but also require the more elusive Boatman coins, which are scattered throughout the majority of levels. Procuring these coins will often take a little bit of traveling off the beaten path, but exploring every nook and cranny of the dungeons is one of the most satisfying aspects of Genesis. There are secrets hidden everywhere, including special side-dungeons which offer up a wonderful digression to the core level, or the extremely valuable Trickster Keys.

These special keys are used to unlock Trickster Doors, which offer up some of the best loot in the game, including character abilities and upgrades to the brothers’ health and Wrath. Unlocking every single Trickster Door in the game will allow access to a special door in Vulgrim’s Void, which is something that every completionist is going to want to aim for. Admittedly I am still two doors off, but I will not be putting down Darksiders Genesis until I’ve unlocked every secret.

Or until I’ve mastered every single Arena, which is a separate wave-based section of the game that unlocks at approximately the halfway point in the campaign. There are multiple levels to the Arena with ascending difficulty, which can help you to rack up some additional souls or unlock Creature Cores that you need to augment your combat.

The musical score for Darksiders Genesis was exceptionally striking, partially because I wasn’t expecting quite the epic ensemble. Major fights are treated to a striking orchestral melody, and even the haunting strains of the menu music are worth pausing to listen to for a few minutes. Music is an integral part of creating the right atmosphere in a game, and it’s something that I’ve often found hash and slash games never quite hit home with.

Darksiders Genesis on the other hand has managed to wonderfully integrate music into their game, and used crescendos at the beginning of major battles to make the player feel the excitement not just through the combat itself, but through the atmosphere the combat is taking place in. It’s another one of those balances that Genesis just hits right on the head.

Darksiders Genesis has a wealth of replay value, and after beating the campaign I expect that I will embark on at least one more full playthrough to finish finding the Trickster doors and unlocking all of the upgrades for both War and Strife, as I spent a majority of my time playing through as the new Horseman. Fighting in Genesis is genuinely so satisfying, and I’m still impressed with the developer’s ability to transfer the series’ special brand of combat into a top-down format.

If you’re at all interested in the Darksiders series or in top-down RPGs/hack-and-slash games, this is definitely a title that you don’t want to miss. It’s perfect for couch co-op, linking up with a friend online, or just mowing through the legions of Hell single-handedly. I hope that in the future Strife will end up with his own game in Darksiders 4, as I can say with confidence he is easily my new favorite Horseman.

Darksiders Genesis has perfectly transported the series’ quintessential hard-hitting combat into a fluid top-down RPG with a Hell of a lot of replay.

THQ Nordic provided two digital codes for the review copies of this game so that we could write the review from a cooperative perspective.