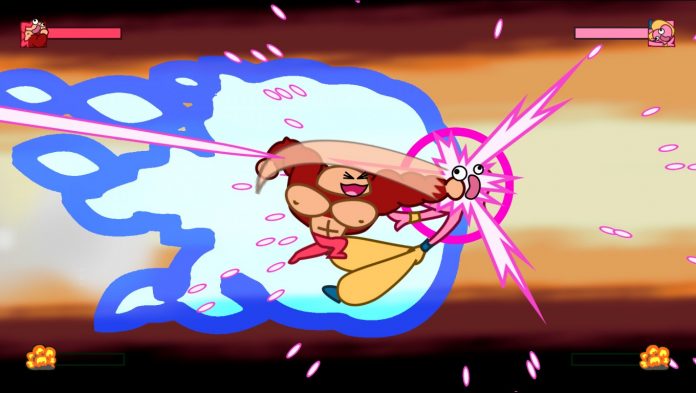 I never thought that in 2020 I’d be playing, and enjoying, a fighting game that’s primary focus and game mechanic revolved around a Rock-Paper-Scissors style quick time event (QTE). But it works quite well, making Jollypunch Games’ Fly Punch Boom! one of the more unique fighting games I’ve ever played, which is suited perfectly for the Nintendo Switch.

The only problem is finding someone to play with.

Fly Punch Boom! is a delightfully unique twist on fighting games and arena brawlers, that is played out between anime-style superheroes across a 2D plane. It’s a completely different type of fighting game, and certainly not one without its own merits. You battle opponents across a number of intensely-vibrant and jam-packed arenas, from the open sea to the depths of space. The problem is that without seemingly any player base on the Nintendo Switch, players are left to find couch partners or face off continuously in the offline Arcade Mode.

Gameplay in Fly Punch Boom! is relatively simple, but a lot of elements require lightning-quick reflexes. You zip around the map in a flash of light, and every time you come together with an opponent you end up in a clash, which requires you to pick Y, A, or X, for the corresponding Hit, Throw, Counter, which work in a rock-paper-scissors format. Hit beats Throw, Throw beats Counter, Counter beats Hit. Sounds easy enough?

Well, it’s not quite as simple as winning the ensuing rock-paper-scissor battles; there are a wealth of intricacies which affect how combat plays out. Counters give a fast-paced QTE section that lets you return some damage of your own, and while throws may not do damage on their own they allows you to hurl your opponent towards the plethora of environmental hazards or even out of the entire arena. It’s these little aspects that help to keep combat fresh after dozens of battles, especially considering the relatively simplistic gameplay.

The timing of your button presses is just as important in Fly Punch Boom!, and depending on where your press falls on a rising/falling meter, you will either fail, land a normal hit, or connect with a super attack. It’s not a bad system, but it’s definitely one that requires developing some muscle memory, lest you’ll be scrambling for buttons without the time to hit them. It’s also definitely a system that requires the player to enjoy, or at the very least tolerate, QTE sequences. If you don’t like Quick Time Events, this game is assuredly not for you.

You can also fly around the map holding the Y button to automatically smash into your opponent, or into any of the buildings or set pieces strewn throughout the map. Smashing these into your opponent forces them into a life-saving QTE, where they must stop another bar traveling along another meter in the proper area. Falling inside the ever-shrinking yellow area means you are safe, while falling anywhere outside of it results in an instant-death.

In my wealth of games against AI opponents, I got insta-killed far more times than I was able to execute it myself, mostly because the AI opponents can perfectly time their button presses. The size of your “safe zone” to stop the bar in decreases every time you’re hit with one of these moves, so the AI had no problem decimating me on most occasions. I feel like playing against another human opponent with similar reflexes would have made for a more even back-and-forth.

The core overarching issue with Fly Punch Boom! is a consistent lack of a player base on Nintendo Switch to be matched against online. I can’t precisely put my finger on what is causing the lack of players, but my inability to match with other players does not appear to come from issues with the matchmaking system itself. Steam/PC players are able to find opponents consistently, but on Nintendo Switch I’ve spent as much time in matchmaking screens as I have playing the game.

It has gotten to the point where I launch the Online and set up a game, either Hosting or in Quickplay, and then just set my Switch down and wait. The developers have instituted a little mini-game to keep players occupied, but this got tiresome after the first several minutes. In my entire time playing Fly Punch Boom (and it’s worth noting I took an extra week with this review in an attempt to allow the player base to expand) I have only been match with several players, and half of these ended in disconnection.

It’s a real shame, because that is definitely where Fly Punch Boom! is meant to shine. Luckily for people looking to scratch that multiplayer itch, the game also features local multiplayer. This is a huge boon for Nintendo Switch owners looking for more couch-brawling games. Unfortunately my wife had no interest in playing a fast-paced fighter with me, and because of the pandemic I was not able to invite any of my usual cohort over to test out the merits of the local multiplayer.

That being said, I can assuredly say that after my time with Fly Punch Boom! that it would undoubtedly be a fantastic addition to party game nights. I am excitedly looking forward to the day when I can re-institute our Friday Night Fights game sessions and introduce all of my friends to the chaotic ballet of over-the-top anime superhero battles. Until that time unfortunately, it looks like I’ll be relegated to perfecting my skills against offline arcade opponents and unlocking all of the in-game achievements.

I really hope that Jollypunch Games manages to solve the lack of player-base on the Nintendo Switch, because Fly Punch Boom! has a lot of potential to be a spectacular online multiplayer for the console. Until that time however, players will have to content themselves with the offline Arcade Mode and hope for an end to quarantine so that we can invite our friends over for some couch-mayhem.

Even with the issues connecting to anyone online, Fly Punch Boom! is a lot of fun and utilizes some classic mechanics to create really unique gameplay. I definitely enjoyed my time playing, even though it got somewhat stale after only playing against AI opponents for so long. If Jollypunch Games can help the online community grow on the Nintendo Switch, I am confident that Fly Punch Boom! could have a lasting impact on the console’s fledgling fighting game scene.

Fly Punch Boom! is an exceptionally unique twist on the fighting genre, but a lack of online community on Nintendo Switch substantially impacts the experience.