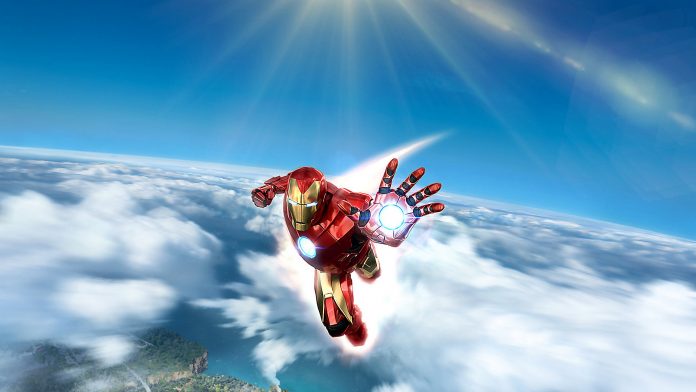 Who doesn’t want to be Iron Man? Mutli-billionaire arms-dealer-turned-superhero and philanthropist, Tony Stark has long been one of Marvel’s most iconic figures. A far divide from your typical origin story, Tony Stark built his suit after dismantling the warmongering side of Stark Industries, deciding to use his vast wealth and technical expertise to protect humanity, instead of supplying arms for its destruction.

The latest VR shooter from Camouflaj puts you in Iron Man’s repulsor boots, and gives the player access to Tony Stark’s near-unlimited arsenal of firepower and the ability to customize your suit with a variety of combat options. The story takes place as our protagonist is decommissioning the vast industry that he’s worked to create, when he is confronted with a new threat that forces him to revisit a life he thought he had left behind. While suiting up as Iron Man can be an exhilarating adventure at points, some technical issues and the repetitiveness of combat detract from the overall experience.

Most importantly to the experience, the team at Camouflaj have done a stellar job making you feel like you are Iron Man when you don the VR headset. There are a wealth of User Interface features projected onto your Heads-Up Display which makes it feel like you are actually in the famous suit. The first time I stepped into it I was immediately reminded of the Iron Man movies watching the blue holographic icons flicker across my vision.

Virtual reality titles put a wealth of stock into immersion, and while there are some peripheral issues with tracking and gameplay in Iron Man VR, the realism you feel is spectacular. Combat flows freely, and once you’ve mastered the very-unique art of flying with your hand-repulsors, you’ll be zipping around the map using one hand to propel you with bursts of speed and the other to decimate waves of the pervasive drone enemies that you’ll spend the game dismantling.

The narrative of the game takes you to some iconic Iron Man locations, from Stark Tower in Shanghai to Tony’s ostentatious Florida mansion where you’ll be spending a fair bit of time as your Base of Operations. You can explore Tony’s home, which contains a wealth of collectibles and nods to both the Iron Man and Avengers series, and interact with some essential characters like Pepper and Friday. Here, you can also upgrade your suit between missions with a wealth of new weapons, upgrades, and even skins which are unlocked through spending research points that you get from completing missions and challenges. The more stars you receive on a mission, the more research points that you unlock for upgrading your suit.

The majority of your experience will be spent traveling the world in search of a masked individual who is using acts of terror to show Tony the destruction that his weapons have caused mankind, but my absolute favorite mission was funnily enough one of the very first. I will never understand why developers decide to start their games with a “jump out a plane and then go back to try and save the plane” level. If your game is going to have a level where you are careening around a plane repairing it while simultaneously flying at break-neck speeds and fighting drones, it should be your climax. In this case the scene was integral to set up Iron Man VR‘s narrative, which is completely understandable, but almost everything afterwards felt far less exhilarating after saving Pepper from a crashing airliner.

When Iron Man impresses, it genuinely feels like one of those games that virtual reality was meant for. It takes a little bit of time to get the hang of the controls, as flying forward by pointing your arms down and hands backwards definitely takes some getting used to. Once it clicked, however, navigating the wide open expanses of each map feels exhilarating. You can rocket through the air with bursts of speed from your repulsor boots, while flinging blasts from your palms and an array of weaponry from your wrist-mounted secondary weapons.

You have a wealth of combat options at your disposal, and in addition to being able to change up your weapons at Tony’s base, you are free to pummel your way through the leagues of drones with your fists and a super-useful Ground Pound for taking out land-based units. And if you’re thinking “Hey wait, didn’t Iron Man have a super-powerful wave-clearing chest laser?” then you would be correct, and not long into the game your old-friend Gunsmith unlocks the ability in your suit. Unlike the other abilities, you have to charge up the Unibeam by defeating drones, but once you unleash it you can reign absolute destruction upon swaths of Stark drones; if only it was a bit easier to control.

One of my chief issues with the game is the assortment, or lack of, enemies that you are pitted against through the game’s 6-8 hour campaign. As the story follows new antagonist Ghost and her goal of using Stark’s military hardware against him, you’ll almost exclusively be fighting against Stark drones as your main enemy. It fits into the storyline for sure, but I was admittedly hoping to see some of the more quintessential Iron Man or Marvel villains make an appearance. That being said, you’re in for some high-octane boss fights that I won’t spoil here, which pit you against some massive enemies as well as the digital antagonist herself.

Iron Man VR suffers from some of the same issues that we see repeatedly affecting virtual reality games; namely peripheral tracking issues. In Iron Man‘s case, you’ll be happy to hear that as far as combat and flight goes, the tracking holds up superbly. Aiming my repulsors or wrist-rockets felt fluid and accurate, and as awkward as it initially feels, flying with my hands down and pointed backwards, it became second-nature. It tended to be the random out-of-suit moments where Tony had to pick up his glasses, or open a box, that had frustrating tracking issues. And I mean to the point where it took me over five minutes to get the tracking to register that I was leaning to pick up the glasses, after resetting it several times and attempting the same movement sitting down.

It was really awkward, and I couldn’t quite figure out what was causing the tracking to go haywire specifically in these spots. There clearly wasn’t an issue with the PS Camera tracking t he PS Move controllers, because it had no problem registering when my arms were pointed down and backwards for flight, and even slight adjustments in my wrists tracked exceptionally well for both combat and flight. For some reason, out-of-suit moments tended to be the ones that really broke my immersion into the game.

While the entire campaign runs around eight or so hours, there are additional challenge modes that test your flight and combat capabilities, which can net you some additional research points to fully unlock all of the upgrades for the suit. You’re also able to revisit past missions (I could play the airplane mission on repeat for hours) to hit perfect 5-star ratings, and max out your scores.

Though I certainly had a fun and immersive time being Iron Man, at the end of the day I couldn’t help but feeling like the experience was ultimately held back by out-of-suit tracking issues and a general monotony in combat. Fans of the Iron Man and Avengers movies will likely have a solid time with the experience, as being Iron Man truly does feel great. Once you master the controls and are able to fly with one hand and shoot with the other, there is a freedom of movement and control that we don’t see in many VR games.

The review copy of this game was a digital code provided by Sony interactive Entertainment.