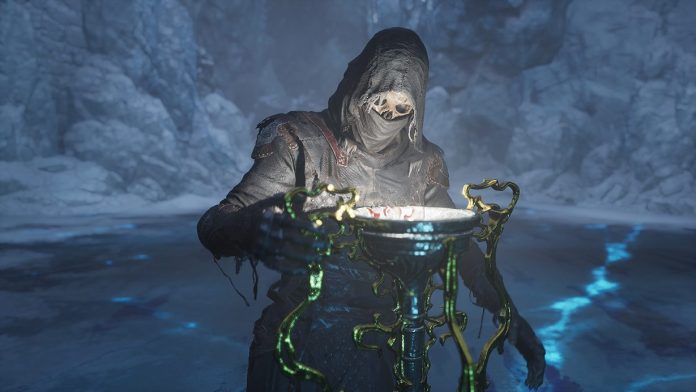 Awoken in a strange land, a shattered husk of your former self, you have no option other than to press forward into a tainted religious land of fanatic zealots; minds shattered from their consumption of the holy Nektar. Stumbling across the body of a fallen warrior, you grasp onto it, a shred of a former life that has been taken by this cruel and unforgiving world.

Mortal Shell is the latest entry in the hardcore action-RPG genre, developed by the small team at Cold Symmetry; composed of industry veterans. It combines brutal and rhythmic combat with several new game systems that aim to define Mortal Shell as a strong newcomer to the genre. Using your newfound ability to take over the bodies of fallen warriors and harden them like stone, you must set out to uncover the secrets of this mysterious land of zealots, and forge your own path through the twisted landscape.

In Mortal Shell you have the ability to take over the bodies of former great warriors who perished in the land of Fallgrim. By utilizing these “Shells”, you can unlock the innate power and abilities of the deceased champions to carve your way through droves of devout zealots aimed at protecting their holy temples. At the request of a mysterious chained prisoner, you must seek out these shrines of the Devout, which are hidden throughout the serpentine Fallgrim Outskirts.

Mortal Shell doesn’t offer much of its narrative up willingly, which is part of the allure of the game. You’re not entirely sure why you’ve come to this land, what the ominous bird-like prisoner is truly asking of you, and perhaps most importantly, if you can even leave this fanatical nightmare. Similarly to the story, as a player you aren’t given much direction other than the vague words of the Chained Prisoner and the intriguing Sester Genessa, a former Devout. All you have to guide you are glimpses into the instincts of these fallen champions, and a sheer will to overcome the seemingly indomitable task that lies in front of you.

As you may have guessed, Mortal Shell is an extremely punishing game. Much like other HARPGs, combat is a measured dance, but it is never unfair. Every death in Mortal Shell should be taken as a learning moment, because in every single case there is something that you could have done differently to avoid it. A better timed harden or dodge, smarter use of consumables, or more often than not, simply understanding your opponents’ patterns.

There are only four main weapons in Mortal Shell, the latter three of which are found in the temples that you must discover. Each of these weapons has a very different combat style, ranging from the exceptional speed and versatility of the Hammer and Chisel, to the measured and powerful combos of the Smoldering Mace. Weapons can work especially well in tandem with specific Shells’ abilities, but finding the combination that works best for your playstyle is an integral part of Mortal Shell. Weapons can be upgraded at the several workbenches that are found in key locations, which can increase their core power and unlock powerful attacks. That is, assuming you can find the required materials.

The most unique aspect of Mortal Shell is the ability to Harden yourself to avoid damage. While the ability allows you to nullify all damage in a brief window of time, any attack shatters the stone and leaves you vulnerable while it recharges. While a defensive move at its core, the ability to harden yourself has a multitude of uses and through experimentation it becomes the single most useful ability in your toolkit. As you unlock additional weapons, you may discover that proactively hardening at a specific point in a combo provides more benefits than purely using it as a reactionary move.

Each Shell has its own ability tree as well, and the Tar and Glimpses that you obtain from felled enemies can be used to increase the power of the worn Shell and unlock their true potential. Wearing a Shell additionally grants the player a “last chance”, which gives one opportunity to reclaim your Shell when an enemy has knocked you from it instead of instantly perishing. It’s no easy feat, as you can be killed with a single hit when Shell-less, but it’s an essential system that will mean the difference between success and defeat against the most fearsome adversaries.

You can’t use any of the aforementioned weapons, or Shells for that matter, until you’ve discovered and unlocked them, which by itself is no easy feat. The only guidance given to you are in the form of “Instincts”, which can be found for each Shell and weapon. These memory flashbacks give the player a brief snapshot of the location in which they can be found, but you’ll still need a solid understanding of the layout of Fallgrim to actually find them. Or, you can just stumble around for hours like I did and happen across the necessary temples.

Learning how every enemy archetype works in Mortal Shell is your ultimate key to success against the Devout masses, as well as the far more difficult enemy archetypes you’ll stumble across. Enemies all have very specific telegraphing for each of their moves, and learning the proper time to harden, dodge, or parry is essential to combating each unique foe, especially when they attack en masse. While it’s undoubtedly an exceptionally punishing game, it is also extremely fair. There wasn’t a single time in which I died that I cried foul at the game, but rather used it as an opportunity to review my own missteps.

Even items are a mystery until you’ve actually used one. While this means subjecting yourself to unknown effects, increasing your familiarity with certain items can unlock additional benefits. Every aspect of Mortal Shell is shrouded in fog — sometimes quite literally — and just when you think you’ve fully grasped how the game functions, it will throw a complete shift at you to make you entirely reconsider how you approach it. It’s delightfully frustrating and constantly kept me on my toes, unsure of what to expect around any corner.

My largest issue with Mortal Shell stems from the fact that for a game that requires you to master enemy movements and patterns, as well as spawn locations, often enemies would take time to load or simply pop-in when you were already within their striking distance. This only seemed to happen when the game-world reloaded itself after you died or sipped the Tar with Sester Genessa, but it got me killed several times before I memorized spawn locations and was cognizant to let an area load before charging in.

Mortal Shell isn’t an particularly lengthy game, assuming that you know where you’re going and what you need to accomplish. Since that’s a pretty tall assumption to make in a game that has a labyrinthine map and gives the player almost no direction as to where they need to go, you may end up spending quite a bit of time navigating the game world and making a mental map. This can prove especially important if you’ve died and have to traverse your way back through the dense maze to find and restore the Tar from your body.

While I don’t typically like to include the price of a game into my review, it’s worth noting that for half the price of the majority of similar titles, Mortal Shell is certainly worth the price of admission. You’re likely to get at least 15-20 hours of enjoyment (read: struggle) from your first playthrough, and Cold Symmetry have not only included a New Game + mode that allows you to replay with all of your current upgrades, but have implemented some exceptionally punishing achievements/trophies for the hardest of hardcore players to aspire towards.

Where Mortal Shell truly succeeds is in showing that the hardcore action-RPG genre still has a lot of room to grow. It’s a disservice to the game to simply refer to it as a “Souls-like”, because there is so much offered in Mortal Shell that is non-existent in other titles in the HARPG genre. Figuring out how to use your Shells and weapons in combination with Hardening gives combat a depth and nuance that’s as refreshing for the genre as it is invigorating to experience.

There is a point where everything just clicks. When the complexity of determining how to best utilize your four Shells, four Weapons, and the seemingly infinite possibilities with Harden all converge. A point where you stop struggling through every battle and begin to just feel the ebb and flow of combat. That feeling of accomplishment from success in Mortal Shell is such a hard fought for and deserved emotion. As someone who typically gets demolished by hardcore action-RPGs, beating Mortal Shell without any assistance left me feeling like I had ascended Mount Everest and come out victorious.

Mortal Shell breathes life into the hardcore action-RPG genre, combining a refreshing and nuanced battle system with an intentionally vague and enticing story.