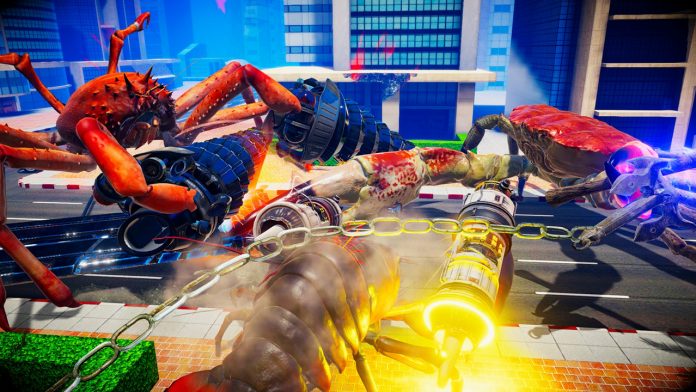 The first rule of Fight Crab is you do not talk about Fight Crab.

What if, and bear with me for a second here, there was an underground fighting ring operating right under all of our noses? With secret organizers scheduling no holds-barred grudge matches, street brawls, and kitchen stand-offs, bringing blade, gun, and claw together in the fiercest crustacean vs. crustacean showdowns this side of the sushi bar?

This hilariously outlandish concept for a fighting game has been on my radar for over a year now, so I was thrilled to get my claws on it when it dropped on Nintendo Switch. Fight Crab is a genuinely unique take on fighting games, which surprisingly is not entirely based around the fact that you are duking it out as crabs — and lobsters of course — while wielding a vast array of weaponry. Occasionally on scooters.

Fight Crab owes its authenticity not just to the fact that you’re fighting as crustaceans wielding everything from daggers and pistols to great hammers and air turbines; there is a hefty physics element to the game, which players will have to master if they want any chance at flipping the competition. And I mean quite literally.

The goal of every match of Fight Crab is to flip your opponent onto their back for the three-count, while avoiding being toppled yourself. You achieve this by attacking or grappling your opponent with your claws, or any weapons you can manage to scuttle your way to, to increase their damage meter. The higher the damage is, the easier time you’ll have flipping your opponent and securing victory. Sounds simple enough, right?

Except for the fact that you must control each claw with the left and right joysticks — on the Nintendo Switch — making the combat a little more intricate and nuanced than simply pressing a button. You use the triggers themselves to punch, and the bumpers to block or grab depending on context, but actually damaging or flipping your opponent is all about proper claw placement, which comes from knowing how to manipulate your appendages with the sticks.

It’s the type of system that takes a lot of playing around to get used to, and likely the first dozen or so matches will be a lot more flailing than actual punching. In fact, if you’re like me you may end up flailing well past your 50th match, but once you get the hang of the physics and start throwing upper-claws and flipping your opponent end-over-end it feels so good.

You unlock new crabs and weapons as you progress through the game, each of which can be purchased using the currency that you’ll make from completing matches, both in campaign and versus. These “Crab-bucks” are also used for everything from purchasing new mounts — that’s right, your crab can ride a seal — to actually upgrading your crab’s abilities, which becomes necessary to give you the edge in combat.

Each crab, and subsequently weapon, has its own ability scores that includes the usual damage and agility, but also more nuanced skills like reach and weight which often end up being some of the decisive factors in battle. Being able to out-reach your opponent, or being so heavy that they require additional damage to topple you, ended up being some of the biggest boons in combat. If you need an edge in a certain area, focusing on upgrading your core-crab is always a good option.

If everything wasn’t already over-the-top enough for you, unlocking and utilizing Hyper Mode amps everything up over 9000. Quite literally, as the first ability that you will unlock is called the Kanihameha and it’s an absolutely devastating beam attack. Much like the rest of the game though, you have to do a sort of “crab dance” to properly execute the move, which definitely felt like I should have been yelling “Fusion HA!”

There is thankfully both an online and offline versus mode, which allows you to put your crab skills to the test against other players, including a 2 vs. 2 cooperative crab fight if you’ve got a local partner. After clearing most of the campaign I thought I was ready to battle against some real-life crustaceans, but I spent the majority of my time online being flipped on my shell. That’s fine though; it just means I need to spend some more time on-ice, perfecting my tactics.

I’ve been speaking about this a lot lately in my reviews; what we really need right now in game development are teams that turn established genres on their heads, and that’s exactly what Calappa Games has done with Fight Crab. Implementing a physics-based combat system in this way to a fighting game adds a complexity and nuance that is arguably more complex than memorizing button combinations.

Fight Crab is the fighting game that we didn’t know we needed. But we definitely did. It’s chaotic, ridiculous, and at times exceedingly frustrating to master the physics-based combat. But that’s all part of the charm of Fight Crab.

Fight Crab is a hilariously fresh take on fighting games, with an easy to learn but difficult to master physics-based combat.

Steep Road to the Olympics Review