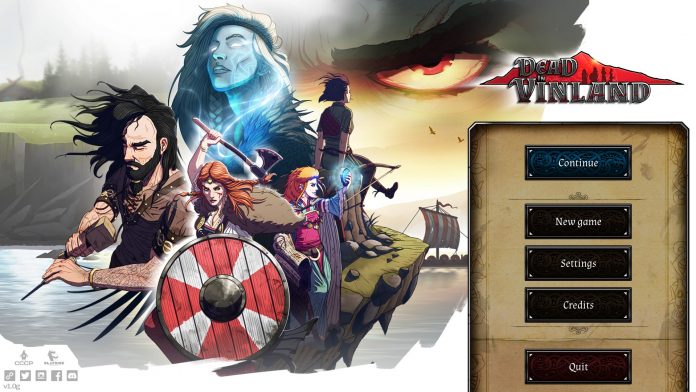 Dead in Vinland —the latest release from French developer CCCP — is a survival management game that purports itself to be a combination of a bunch of different style of games. As many developers and games like it have found, trying to be too many things at once often ends up with shortcomings in each aspect instead of having a clearly defined vision. Dead in Vinland had the potential to be a solid survival game, but the overall gameplay is mired in its inability to decide what type of game it was.

Dead in Vinland is self-described as a “survival/management game, mixed with RPG and adventure elements, about a Viking family trying their best to survive on a mysterious island“ on the Steam Store page, which immediately intrigued me. The concept had the potential to be a uniquely conceptualized survival/management game, but unfortunately adding the RPG and adventure elements into the mix felt like it added a ton of fluff that a game would have been much better off without. 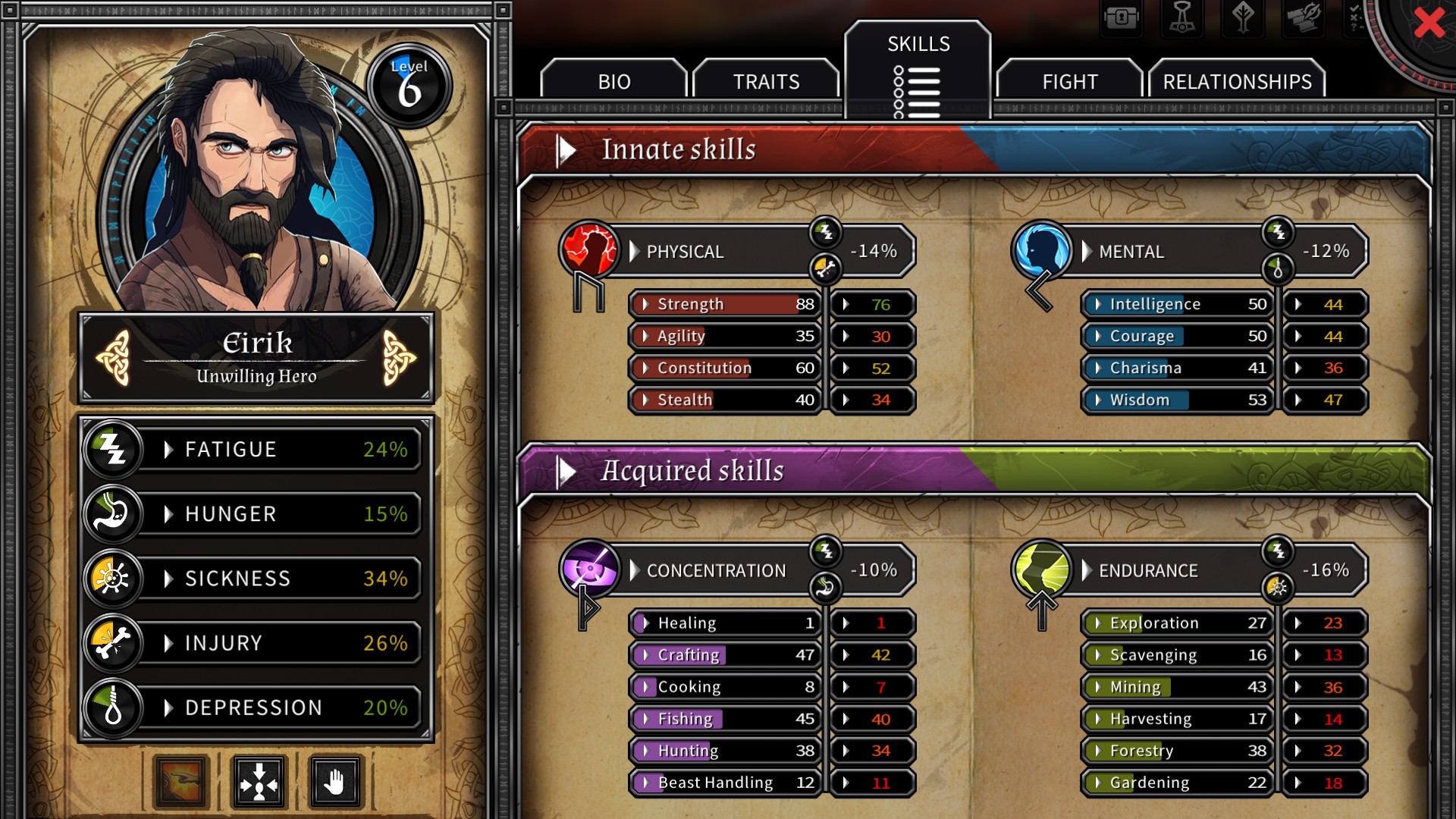 Pictured above is the skills screen, which at first glance seems complex and detailed, but becomes muddled and confusing even after 10+ hours into the game. This type of Skills system would be much better suited to a JRPG where the subtleties and wealth of options would be far better utilized. While it may seem odd that I am lamenting at the selection of skills, its helpful to put this into perspective with the larger gameplay.

The game informs you that you will use three skills per encounter, but in reality you only use one per instance; Dead in Vinland shows the three skills that it will pull one at random from. When it comes to actual execution and post-encounter payoff, the skills seem to have very little to do with success or failure of any encounter. Because of this mechanic it made it hard, if not impossible at some points, to determine how a selected skill was going to affect any given situation. 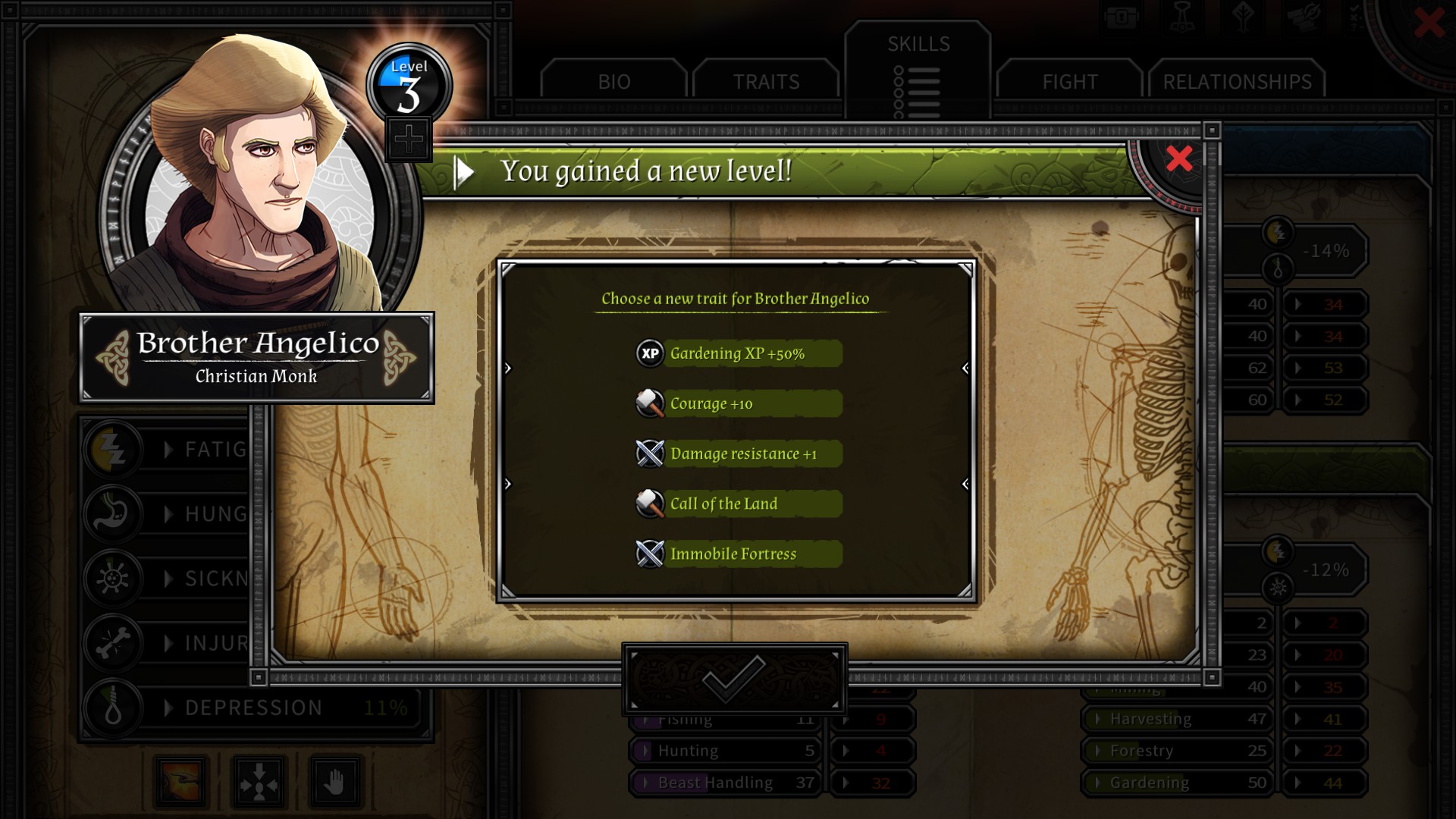 Leveling up in Dead in Viland is plagued by the same issues that the Skills are; the majority of the factors don’t seem to come into play at any point during the game. Pictured above is just one example of the possible options you can get when you level up — you get five random perks — most of which seemed to be utterly useless during my playthrough. It would have been a much better system in my opinion if the random selection was pulled from a smaller list of perks (perhaps only two-three) or if I was able to have some more semblance of self-determination in how the rolls were determined.

Gaining a level gives you this random selection of options that almost never apply to what you need for that specific character to be a productive member of the group. It left me with a feeling of frustration and helplessness as I tried to create useful combinations of character skills — adding in new ones to supplement my current party when one character leveled up — but it never felt like my decisions mattered. 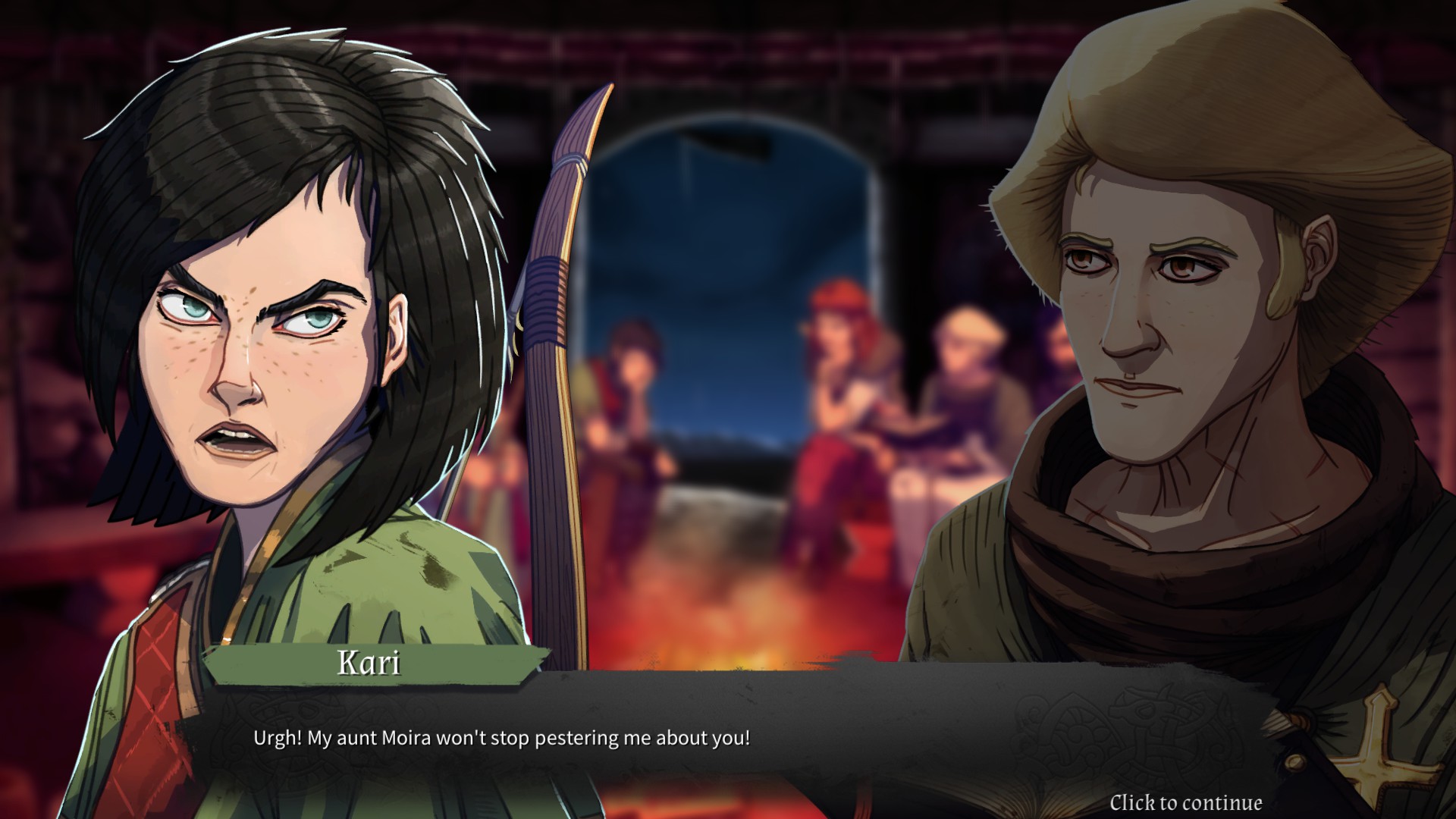 As for the dialogue in the game, it’s — frankly speaking — terrible; there is no other way to describe it. The daughter (pictured above) talks like a modern 18-year-old girl with authority issues, including an especially trite moment where she rolls her eyes during a conversation, leaving me to just scratch my head at the completely out-of-place attitude that seems to have been shoehorned into the narrative to make it relatable or comical.

For a Viking themed game — which for all intents and purposes is aiming to be era-appropriate — almost all of the dialogue was completely out-of-place. None of the character interactions seemed to be consistent as I progressed through the story, and the overarching tone of the narrative just felt way too modern and generally out-of-place for a game set around 1000 years ago. 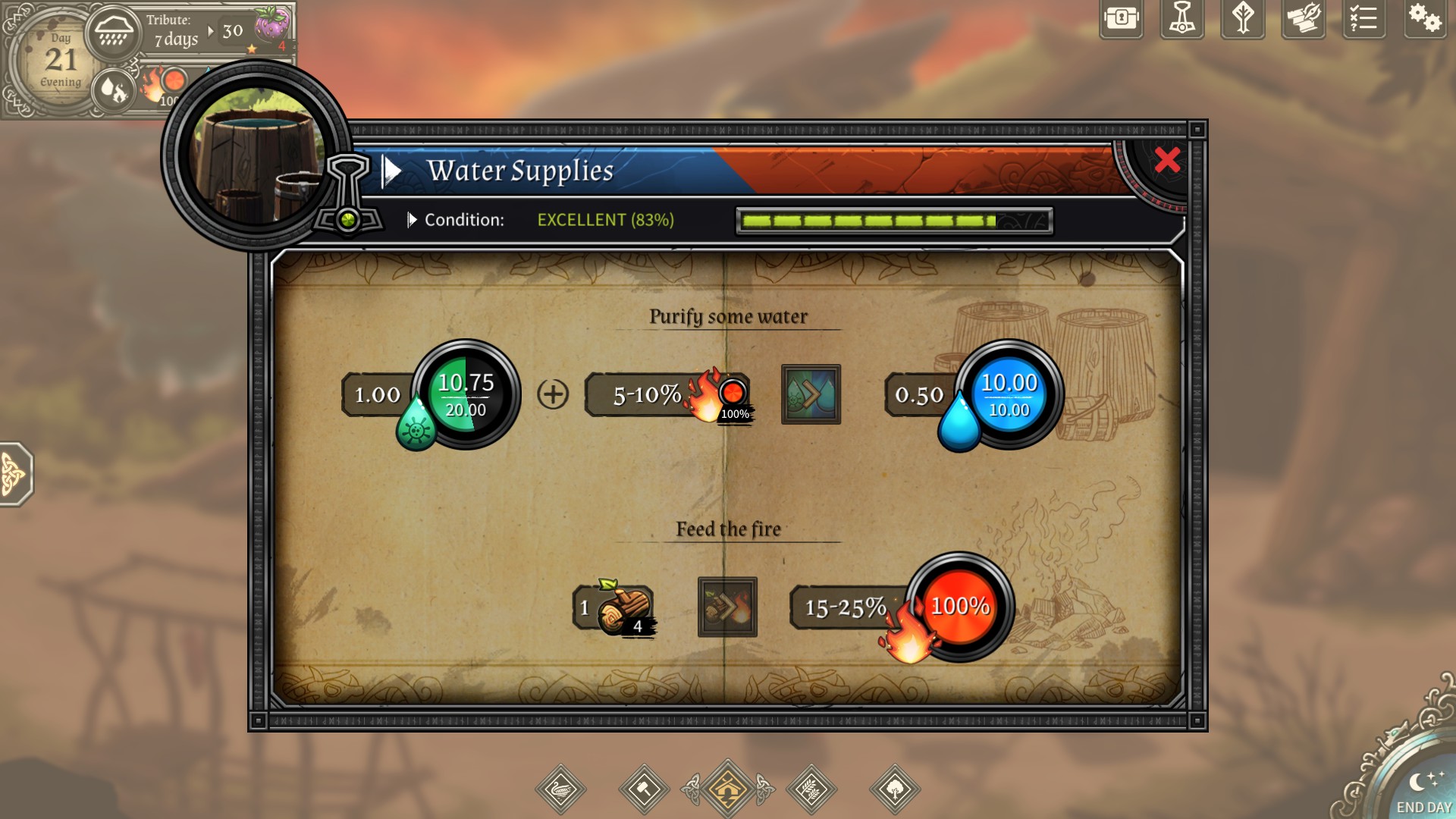 The resources that you are required to gather and are necessary to succeed at the game are not well-balanced; I almost always had an excess of useless materials and a severe shortage of useful materials. My characters with high ranks in the gathering skills didn’t seem to mean much of anything when it came to actually returning with the materials that I require, and if they did my investments into the ‘gathering’ skill yielded minimal differences from characters without the upgrades.

It appears that the highest tiers in gathering yielded you less than 50% more than the lowest tiers. This is not specific to this one skill line though; it seems to be universal across all the skill sets, that regardless of the points you have invested into any skill, the effects of upgraded skills did not appear to have a substantial impact on how battles or post-encounter payoffs were determined. 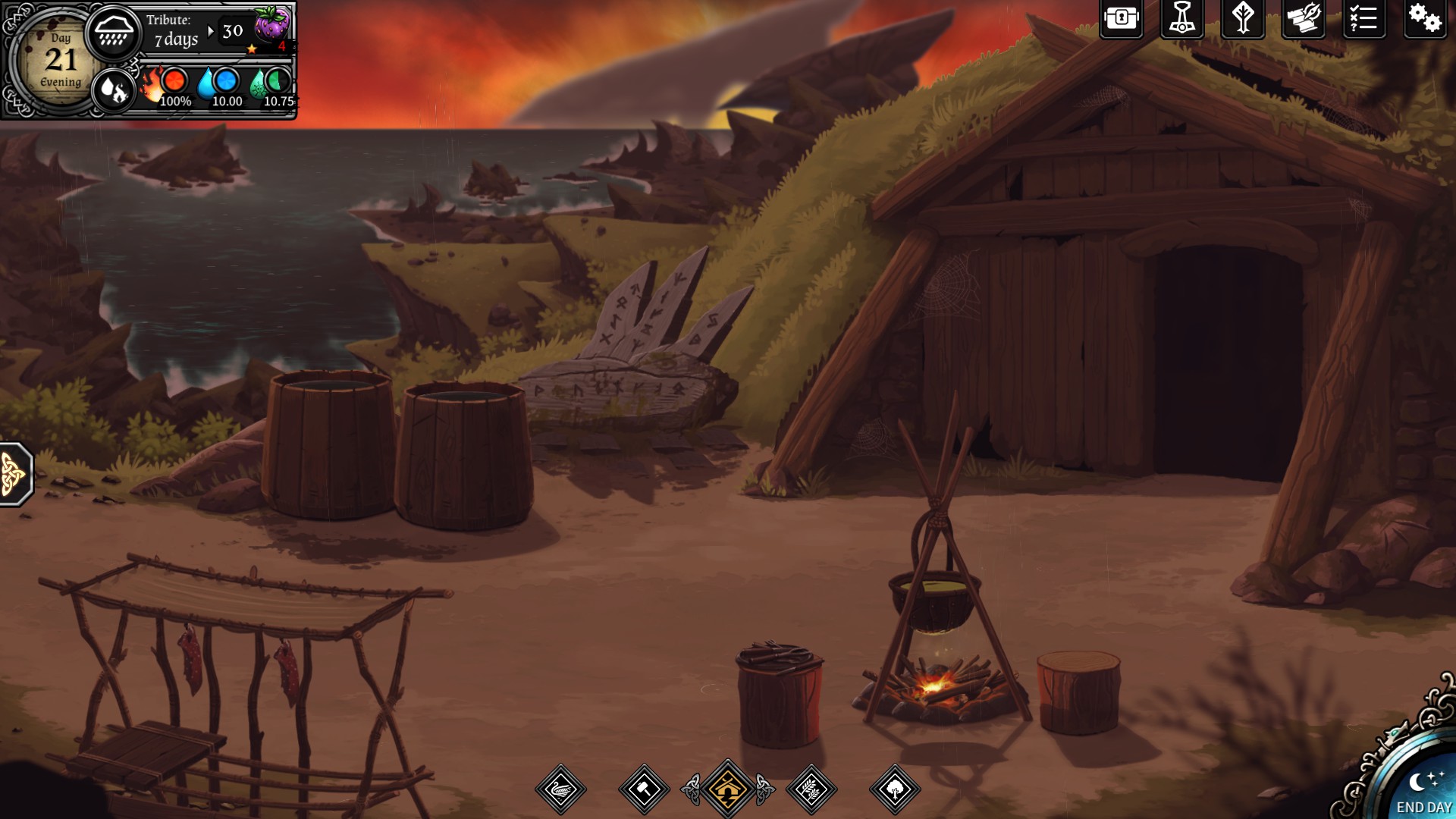 I wanted to enjoy this game, especially after being initially intrigued at the concept of a survival sim set in Viking times. After over 10 hours of gameplay however, I spent more of my time with Dead in Vinland frustratingly trying to figure out how to get the systems to work together, to the point that I found it hard to finish the game. I think that Dead in Vinland could still be a well-rounded game, but in its current state, there is a lot of work that needs to be done both balancing the systems and ensuring that they work as they’re intended.

Overly complex and poorly-implemented skill systems and a trite dialogue mire what could have been an entertaining viking-survival sim.

A digital copy of this game was provided by the publisher for review.

How Shadowrun Returns Brought RPGs Back to Their Roots