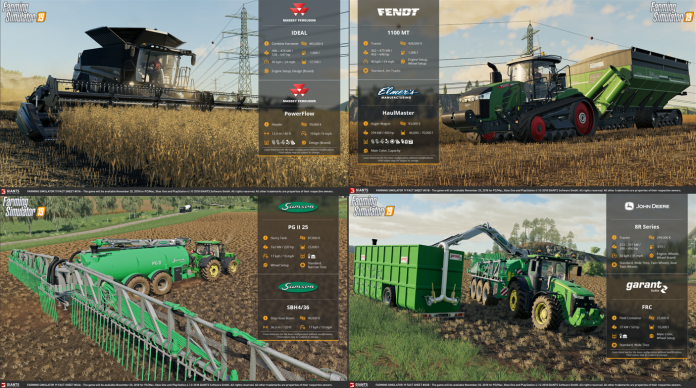 As we edge closer to Farming Simulator 19‘s November 20 release date, GIANTS Software is continuing to slowly release more and more information about the game. As the developer did in the lead-up to Farming Simulator 17‘s release, they have committed to releasing a series of “fact sheets” (typically every Friday) that provide significant detail about a couple pieces of the machinery and equipment in the game. Generally, every fact sheet contains information on one tractor or combine, as well as one piece of equipment that can be used by that piece of machinery.

GIANTS posted 23 fact sheets prior to the release of Farming Simulator 17 – each of them detailed two (or even three) items from the game’s garage, in total providing information on 50 of the pieces that the base game had on offer. This time around, GIANTS has promised “roughly 25 sheets” (as per Public Relations & Marketing Manager, Martin Rabl, in their Discord server). The first two sheets are both split into a part A and part B, featuring a total of eight items. As they did with past fact sheets, GIANTS has set these ones up to showcase equipment that’s likely to be used together. Fact Sheets #01A and #01B show off some equipment that has already been seen in screenshots – the AGCO IDEAL combine and its Powerflow header (with the Massey Ferguson version shown), the Fendt 1100 MT tractor, and the Elmer’s Manufacturing HaulMaster.

The AGCO IDEAL and Powerflow header can be seen in fact sheet #01A: 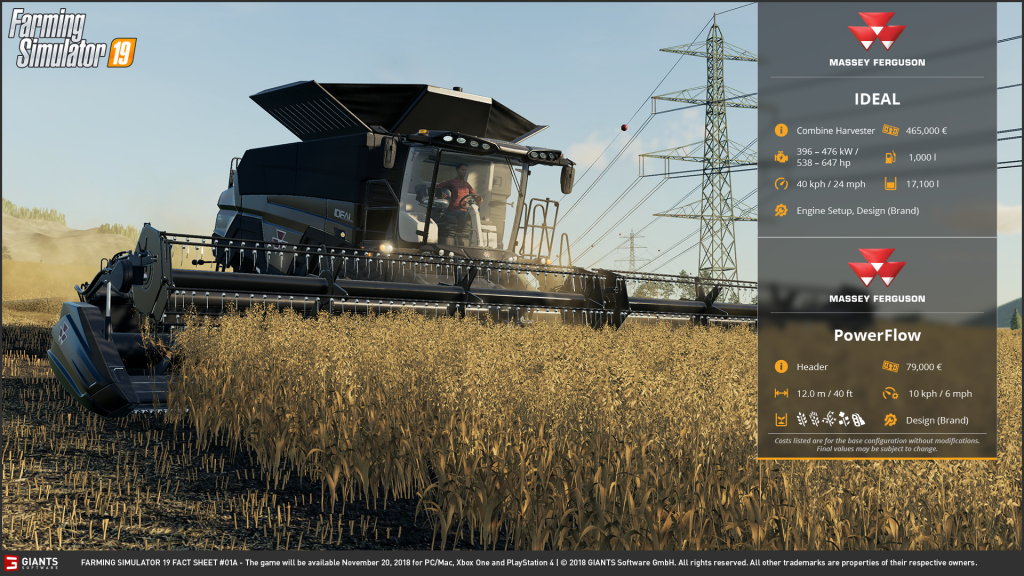 The IDEAL is no doubt going to be the largest combine in the game, seeing as it’s said to have the largest grain tank in the world. AGCO produces three models of the IDEAL combine, and according to the fact sheet it appears as though Farming Simulator 19 will offer a choice between two of them: the 538 HP IDEAL 8 and the 647 HP IDEAL 9. The smallest model—the 451 HP IDEAL 7—looks to have been left out of the game. And while Massey Ferguson’s website indicates that all models are available with either a 12,500 litre or 17,100 litre grain tank, the fact sheet only shows the larger capacity, so it’s likely the only option available. While different grain tank capacities aren’t an option, the fact sheet shows that players will be able to choose the combine to sport their branding of choice (likely Massey Ferguson or Fendt, however it’s unclear if the Challenger version will also be offered).

Featured along with the IDEAL on the same fact sheet is its header, the Powerflow. Also available with either Massey or Fendt branding, the Powerflow is a 40 foot combine header that can harvest wheat, barley, oats, canola, and soybeans.

Fact Sheet #01B shows the Fendt 1100MT and Elmer’s HaulMaster: 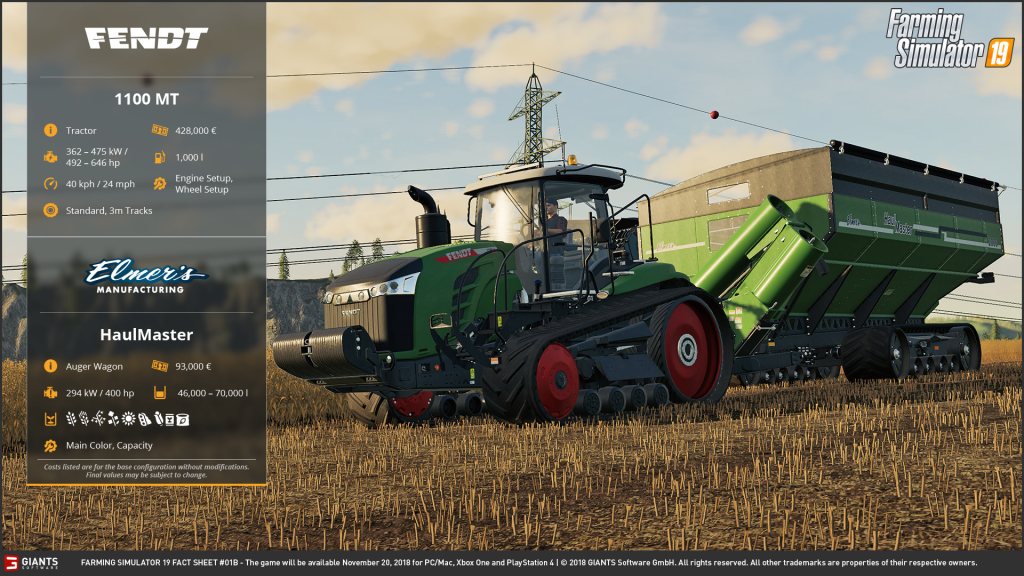 This fact sheet shows off a tractor and auger wagon (also known as a grain buggy or chaser bin) large enough to keep pace with the IDEAL. According to Fendt’s website, in real life Fendt produces 4 different models within the 1100MT series: the 1149MT, 1154MT, 1159MT, and 1165MT. These models range from 457 HP to 598 HP. Upon close inspection, the tractor shown on the fact sheet appears to be the Fendt 1149MT, which is rated at 457 HP. However, the fact sheet indicates that the Fendt 1100MT series in the game is available in configurations between 492 and 646 HP. This variation may be due to GIANTS using European vs. American models of the tractor, however I will update the article if I can get an explanation from GIANTS. In any case, it seems as though several models of the 1100MT series will be on offer, and it will definitely land on the more powerful (and more expensive) end of the available tractors in the game. The fact sheet also shows that in addition to selecting engine power, players will also be able to choose between standard tracks and 3 metre tracks.

The Elmer’s HaulMaster is a massive auger wagon, available in configurations from 46,000 to 70,000 litres (approximately 1,300 to 2,000 bushels). It’s a versatile wagon, as it’s able to hold wheat, barley, oats, canola, sunflowers, soybeans, corn, solid fertilizer, and seed. This means players will be able to use it for hauling crops and/or filling fertilizer spreaders and seeders. I would guess that this will be the largest auger wagon in the game, seeing as the Brent Avalanche auger wagon from Farming Simulator 17’s Big Bud DLC topped out at 53,000 litres. Players will also be able to change the colour of the wagon, however the HaulMaster has no option for wheels instead of tracks – Elmer’s doesn’t make a version with wheels in real life. 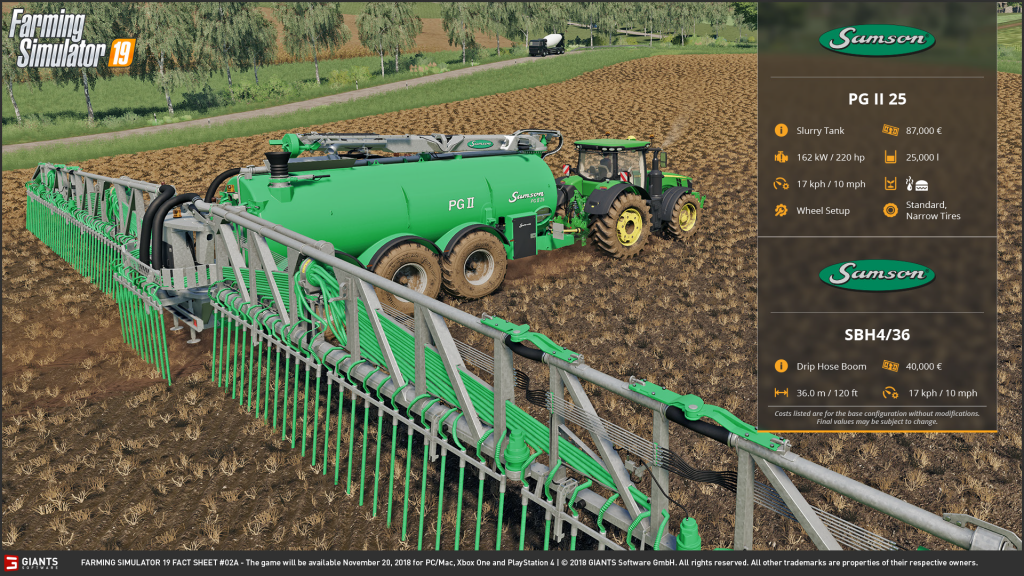 Samson is a new brand to Farming Simulator, and this slurry tank means business. Slurry tanks are used to spread either animal slurry (liquid manure) or the liquid byproduct of biogas plants that are usually present in the game, though in the case of the Samson tank, it clearly requires an additional purchase of the boom in order to make it functional. With a capacity of 25,000 litres, the ability to choose between standard and narrow tires (to avoid crop damage), and requiring 220 horsepower, this tank will likely be one of the larger ones in the game. The size of the drip hose boom seems to confirm this, as it is 36.0m (120 ft) wide! That’s a massive spread, and should be able to cover most fields in just a few passes. 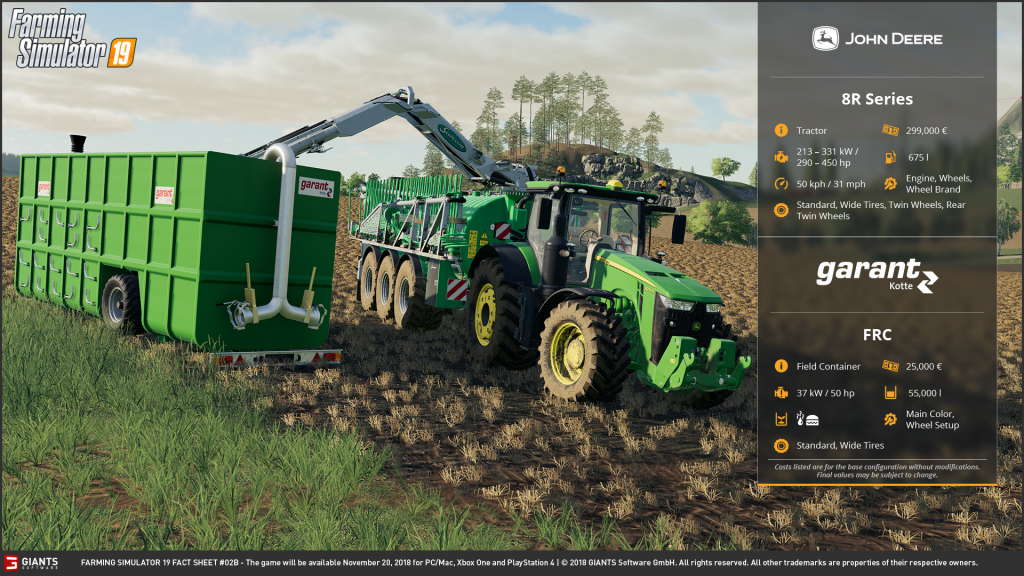 The John Deere 8R series is an incredibly popular line of row crop tractors from the giant manufacturer, and players will be happy to see that there are many options available to choose from when deciding just what they want to get out of their 8R tractors. Offering a range of engine power between 290 and 450 HP, the ability to choose between two different wheel brands (Trelleborg and Michelin), and a variety of wheel setups (standard, wide tires, twin wheels, and rear twin wheels only), the 8R will definitely be a versatile tractor that will prove useful in many different situations. However, with a base cost of $299,000 it certainly won’t be a cheap option for players just starting out.

The garante Kotte field container has been seen in past versions of Farming Simulator, and it’s good to see the handy piece of equipment back again. This tool allows players to set it down on—or beside—a field to hold slurry so that they don’t have to make repeated trips back to their animal pen or biogas plant to refill their slurry spreader. With a capacity of 55,000 litres, this container is capable of providing two refills to even the Samson slurry tank seen in Fact Sheet #02A, which should be enough to fertilize several fields. Worth noting from this fact sheet is the way in which the Samson slurry tank is refilling from the field container. The arm extending from the tank to the container is an excellent touch of realism, as in the past refilling typically occurred without any actual contact between the slurry tank and where it was being filled from.

Overall the fact sheets look great, and the graphical quality of the equipment models in Farming Simulator 19 is very evident. I’m very happy to see some large equipment being shown right away in the first fact sheets, and hope that it’s a sign of things to come (though I know we need some smaller things too!).

In addition to the fact sheets, GIANTS has been releasing a series of developer blogs with in-depth information about game features and more, so stay tuned to Scholarly Gamers for more analysis of future fact sheets and any other news on Farming Simulator 19!