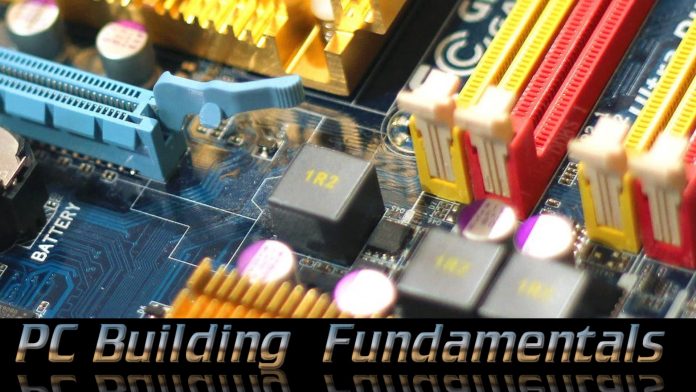 PC Building Fundamentals aims to provide you with a solid foundation of knowledge in order to help you select the components for—and build—a new Personal Computer. As custom-built PCs have become more mainstream, the amount of users opting to build their own rather than purchase pre-built systems is steadily increasing. Whether you have just started to consider the idea of building your own PC or you have been doing it for quite some time, hopefully this series will be beneficial to you. Each individual episode covers a specific topic that will be tackled as objectively as possible, while striving to use a range of sources and factual references rather than just a singular opinion.

It is worth noting that building a PC is not for everyone; assembling a computer is very much ‘at your own risk’. Whilst the individual parts will usually be covered by warranties, there is an inherent risk with putting something together yourself. With that said, the satisfaction from putting together your own PC and having it work as intended vastly outweighs the convenience of purchasing a pre-built system. PC Building Fundamentals aims to provide you with the confidence to tackle your own custom build, as well as some tips and tricks along the way. The series will utilise a combination of my own knowledge, trusted references within the tech community, visual demonstrations, and virtual demonstrations using PC Building Simulator.

Motherboard Selection can be Confusing

With so many different manufacturers, model numbers, form-factors, and sometimes strange naming conventions; choosing a motherboard can be quite difficult. One of the best resources to utilise when trying to decide is of course online communities/forums, discussion with others can often assist with making the right purchase. If however you prefer to rely solely on reviews and articles, there are several good resources out there such as these ones from Tom’s Hardware or PC Gamer.

When you have eventually decided on the board that you want, just keep in mind that this choice will also impact other component choices. Within Intel specifically, the choice of motherboard will ‘lock you in’ to a particular generation of CPU; whilst pairing up an older AMD Ryzen motherboard with a newer CPU may not immediately work, and would require a BIOS update to function correctly.

Following on from the last episode, this episode discusses some of the things to consider when purchasing and installing a motherboard.

Choosing the right motherboard for a system is one of the most critical decisions of a build. Functioning as the central circuit hub for the entire PC, it enables the connection between all components and peripherals attached to the system. It also serves as the power distribution centre, effectively acting as the ‘middle-man’ between a power supply and the components.

As the motherboard is such an integral aspect of any build, saving some money by purchasing an inferior part can potentially be quite costly down the line.

If you want to further discuss the topics as the series progresses, you can get involved in the conversation via either the Scholarly Gamers’ Discord Server or over on our subreddit; where every article and video from the site is posted.