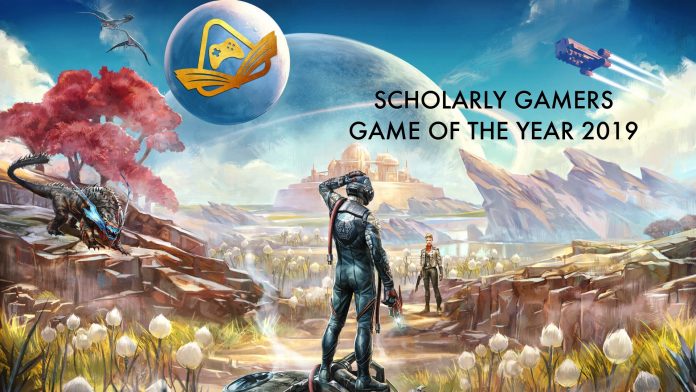 It’s been a huge year in gaming and with the diversity of gamers that we have in the Scholarly Gamers’ community, we knew that there would be a number of games nominated across every genre. Shooters, RPGs, and action-adventures crossed paths for our Top 3 nominations, with our top GOTY votes going to a combination of the three genres.

The past few years have began to see the blurring of lines between genres that we once thought of as wholly separate, and it has been to the benefit of gamers everywhere. Games like The Division 2, Destiny 2, and The Outer Worlds have brought their own unique blends of the shooter-RPG formula, which our community — much like many others — has absolutely eaten up. We can only hope that 2020 continues to delight with their cross-cutting games that will continue to push the boundaries of what video game worlds can offer us as players.

Derrick Cochrane wrote:
[Second Place nomination] Apex Legends stumbled a bit initially during its first season with the lacklustre battle pass rewards and grindy levels, but it was a very solid surprise release with very tight gameplay and fun twist on the Battle Royale genre that had been previously dominated by PUBG and Fortnite.

Derrick Cochrane wrote:
[Third Place nomination] While Shadowkeep specifically was the major Destiny 2 release this year, I feel it’s important to also mention the Season of Opulence. Season of Opulence was a fantastic addition to Destiny 2, with varied loot and a fun new game mode in The Menagerie. While Shadowkeep was a massive expansion, bringing back the moon, revamping armor and bringing back some of the more RPG aspects of Destiny, it was held back by its shallow loot pools and reused assets.

[Third Place nomination] From Software’s signature series typically have a charming clunkiness to them. Sekiro throws that out the window. A fluid grappling hook and robust stealth gameplay adds new depth to the Dark Souls formula we have seen so many times before. From Software gave us the ‘Soulslike’ genre, it is only fitting they innovate on it with one of 2019’s best action titles.

[First Place nomination] Scholarly Gamers’ first Game of the Year nominations took place in 2017, and I was sure to include 2016’s The Division as my non-2017 honourable mention. The game was a fantastic concept right from launch in 2016, yet it didn’t truly hit its stride until a year later after countless systems received major (or minor) updated in observance of player feedback. I can’t help but feel like The Division 2 is on a similar course, which is exciting in light of just how damn good the 1.0 release was.

The environment is beautiful and made with stunning attention to detail; Ubisoft Massive and their partnered studios did another exceptional job in first building Washington DC, and then destroying it. The Division 2 is best played with squadmates, and the dynamic scaling of enemies per-player is helpful for when friends pushed ahead in their own story and later came back to help run through my own progression. The looting system made for more plentiful hunting than in the original game, but the addition of brand sets and initial omission of the more-powerful Gear Sets (that series veterans were used to) proved to be a bitter pill for some to swallow for those seeking build diversity and end-game power. This, coupled with shortcomings in the first raid (difficulty on console and lack of matchmaking anywhere) and a few other sticking points drove many players away.

Even though The Division 2 has shortcomings when compared to its own predecessor (there are some lessons that many The Division fans had hoped Massive would learn), I truly found it to be one of the more engaging worlds that I’ve spent my time in. Dozens of hours in, my friends and I kept uncovering new secrets, new bosses, and loot to push our characters’ builds further. It’s a game with loads of complexity buried under the surface, but still bearing enough simplicity that franchise newcomers wouldn’t be faulted for simply following a combination of increasing their stat numbers and overall feel of the weapons and abilities available.

We’ll see what the future has to hold for The Division 2; it’s very possible that the title will soar to elevated heights as their content schedule continues marching forward. Who knows – it may just be another Honourable Mention in next year’s GOTY voting with Scholarly Gamers.

[First Place nomination] Fans of the original The Division had been eagerly anticipating the release of the sequel, myself included; but much like it’s predecessor, reception turned out to be mixed. I stand by our review of the game, which I believe was a balanced account of the state of the game at launch. Which is unfortunately when a lot of players moved on to play other titles; the remainder of 2019 however saw The Division 2 receive several updates and additional content, resulting in an already excellent game becoming even better.

Whilst there are no doubt other games that were released in 2019 which are objectively better than The Division 2, this is the best game of the year for me. The Division 2 is the game that I find myself continuing to come back to when I have some spare time for gaming; and with the post-launch content that continues to be released, there is no doubt in my mind that I will continue to play The Division 2 throughout 2020 as well.

In fact, I think I will go explore the streets of Washington D.C. right now!

[Honourable mention] While I enjoyed the time I spent with The Division 2, it didn’t quite click with me as a looter-shooter like Destiny 2 does. I made it to endgame but despite the new chapter releases I have felt very little pull to go back into it like I do with Destiny when it has new expansion drops.

[First Place nomination] Though The Outer Worlds suffered a bit from its average combat gameplay and awkward balancing, it was a fun romp through a well-written RPG that reminded me of a neon [Fallout] New Vegas in space, with Obsidian’s signature storytelling and fleshed-out universe.

The Outer Worlds was another one of 2019’s releases that managed to bridge the gap fluidly between nostalgia and something completely new. With Obsidian Entertainment at the helm, we were treated to their signature flare and thorough RPG treatment. Best known for games like Fallout: New Vegas and Knights of the Old Republic 2: The Sith Lords, the team from Obsidian has had their hands on almost every classic RPG series of yore, including Fallout, Baldur’s Gate, Planescape, and Neverwinter Nights.

There is a reason that during its relatively short lifespan, Outer Worlds has had the impact that it has on so many gamers; Obsidian knows how to create a captivating world that draws players in to absorb every ounce of the narrative and every physical nook and cranny. Their world-craftsmanship is almost unparalleled, and while certain aspects of The Outer Worlds felt somewhat lackluster — such as the gunplay — interacting with the residents of the Halcyon System and deciding your role in the corporate space race was some of the most immersive gameplay of the year.

The only thing missing from The Outer Worlds was, arguably, more Outer Worlds. As I completed the game all I wanted was more: more planets to explore, more capitalists and humanitarians to find myself in the middle of, and more immersion into a world that was quickly becoming one of my favorite environments. At the end of the day, that just speaks highly to what Obsidian’s team has achieved with The Outer Worlds; their first release since joining Microsoft Studios in 2018. It’s fantastic to see the developer back, and seemingly in full-force, and we all can’t wait to see what they continue to delight us with in the future.