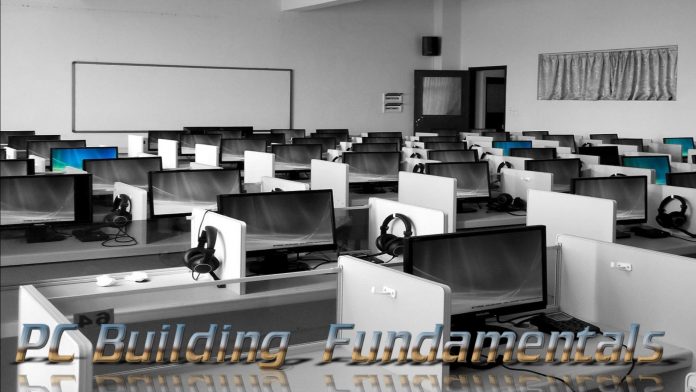 PC Building Fundamentals aims to provide you with a solid foundation of knowledge in order to help you select the components for—and build—a new Personal Computer. As custom-built PCs have become more mainstream, the amount of users opting to build their own rather than purchase pre-built systems is steadily increasing. Whether you have just started to consider the idea of building your own PC or you have been doing it for quite some time, hopefully this series will be beneficial to you. Each individual episode covers a specific topic that will be tackled as objectively as possible, while striving to use a range of sources and factual references rather than just a singular opinion.

It is worth noting that building a PC is not for everyone; assembling a computer is very much ‘at your own risk’. Whilst the individual parts will usually be covered by warranties, there is an inherent risk with putting something together yourself. With that said, the satisfaction from putting together your own PC and having it work as intended vastly outweighs the convenience of purchasing a pre-built system. PC Building Fundamentals aims to provide you with the confidence to tackle your own custom build, as well as some tips and tricks along the way. The series will utilise a combination of my own knowledge, trusted references within the tech community, visual demonstrations, and virtual demonstrations using PC Building Simulator.

What Do I Need My PC For?

Which direction you take with your own build really depends on how you plan on using your PC. Will it be used predominantly for gaming, and occasionally used for video-editing? Or is multimedia manipulation your 9-5 job, but you want the PC to also be capable of playing the occasional AAA game?

For gaming, there are so many variables to consider (type of game, resolution, desired frame-rate, etc.) when planning your PC build. A fast CPU paired with a powerful video card should result in good gaming performance, but the amount of cores the CPU has is not as crucial; but at least a quad-core is recommended.

For video editing and graphics rendering, a fast CPU is also desired, but the amount of physical cores is considerably more important; this is where having 6 or 8 or even more cores really shines. Depending on the resolution of the footage, this PC build will likely require much more RAM than what a gaming PC would typically use as well. Some modern software can also benefit from a decent video card, which can help reduce rendering times by offsetting some of the workload.

Audio production is much less demanding than gaming and video editing, with the hardware specs depending on which software you intend on using. The key investment in this type of build will focus on a high quality sound card with a variety of input/outputs, and of course some high-quality speakers.

Following on from the Prologue, this episode discusses some of the aspects to consider when planning your PC build.

If you only require a personal computer that is capable of browsing the Internet or making use of simple office software, then of course there is not much to consider; a simple Chromebook or even a Raspberry Pi will do the job just fine. Constructing a PC that is a dedicated gaming system however, requires prioritising different components in comparison to a dedicated video-editing workstation. Likewise, attempting to put together a build that will do a little bit of everything, usually results in making compromises in certain areas.

Regardless of which direction you choose to take, the importance of defining your use case scenario when planning your build is integral to the success of the project itself.

If you want to further discuss the topics as the series progresses, you can get involved in the conversation via either the Scholarly Gamers’ Discord Server or over on our subreddit; where every article and video from the site is posted.