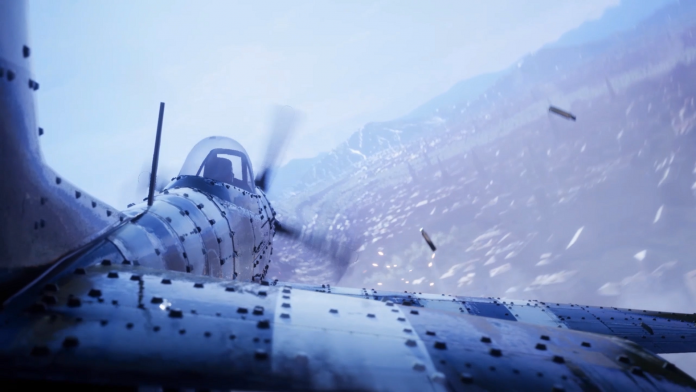 Survive in the Skies

Amidst the wealth of exceptionally similar Battle Royale games that have been released in the past several years, there were bound to be developers who wanted to really shake up the formula. Dogfighter -WW2- is an evolved take on the established Battle Royale genre, focusing on aerial dog-fighting combat circa World War 2 in lieu of the traditional “drop in and shoot everyone” path that almost every other BR developer has chosen to tread. Launching as a PlayStation 4 exclusive, it’s an absolutely refreshing experience, but not one without its own hiccups.

First and foremost, as someone who has been playing Battle Royale games since their initial conception, it is genuinely invigorating to play a wholly different take on the Battle Royale genre that has seen marked prevalence in the past several years. Dogfighter -WW2- offers up substantially different gameplay than almost every other BR game on the market, but it does fall into some of the same trappings that have become common recently. They have their own version of the Battle Pass — the aptly named AirPass — and a burgeoning microtransaction marketplace that sells skins and cosmetic items.

Each round of Dogfighter has 40 players, which doesn’t sound like a lot but in comparison to the more traditional soldier-based combat, pacing in the sky is very different. Instead of dropping from a plane, which would be a bit redundant, players choose which zone of the map they want to spawn into when the game starts. Much like opting to drop into a remote area versus a city can help to determine the flow of combat in other BR games, your beginning zone can help set how you want to approach a battle. Starting along the edges allows you to take your time scouting the areas, while heading straight for the center of the map provides a wealth of upgrades and plenty of enemy planes to take aim at.

Combat in Dogfighter -WW2- is comfortable; it doesn’t push any limits in what we’ve seen in aerial dogfighting games before, but it’s a relatively smooth and easily accessible experience. It’s not exceptionally difficult to learn the basics and I found it easy enough to get the hang of, but mastering the intricacies of flight is another matter entirely. Planes fly at a standard speed, and you can increase or decrease your speed using the bumpers to allow increased maneuverability. Once you have someone locked in your sights you can initiate a Chase, which locks you onto the plane but can make it slightly more difficult to aim precisely, versus controlling your sights manually. You can break a Chase-lock by using an aerial maneuver, but there is a cooldown so you have to time it well. The maneuvers change depending on which way you’re leaning the joystick, and are extremely useful for looping back on an adversary and returning fire.

Mastering the controls is not the only key to success in this Battle Royale. Upgrades play a large part in how battles are decided, and the map has multiple blimps which are stationed in static locations and drop specific Power-Ups and ammo/fuel refills to boost your combat capabilities. A huge differentiating aspect of Dogfighter is that games are often made or broken depending on how you choose to utilize these floating loot-box dispensers. In my second game I made the mistake of not keeping an eye on my fuel, and crashed into a mountain before I had a chance to reach one of the fuel blimps.

The upgrade-dropping blimps definitely take some getting used to, and players are constantly flocking to them which makes grabbing an item yourself often tricky in the early minutes of the game. While they add a different level of strategy to the game, players can do things such as overload on health or fuel early in the game, and then spam them late game to maximize their survivability during the final moments. In a sense they are no different from the chests and scattered items that are found in most other BR games, but because they are easily visible in the sky it creates a number of cluster zones which are full of enemy combatants.

They do make for some pretty intense moments, though. During one match I ran out of fuel and was careening towards the ground when I altered course to take me below a blimp that was luckily dropping the very fuel item I needed at that very moment. I was able to grab the fuel and quickly refuel my craft before hitting the ground, and make my way back towards the fight. It’s too bad that by this time, the Battle Zone had appeared and I was too far gone to make it back to the zone before my plane sustained critical damage.

Instead of having a gas or fire that closes in to push players together, there is a moving circular Battle Zone that shifts throughout the map. There isn’t a timer that counts down, but you get a warning letting you know that the zone will restrict itself in one minute. Because it’s difficult to know exactly when the zone is dropping, and even harder to predict where it is going to appear, you need to stay on top of your map to ensure you make your way to the Battle Zone as soon as it appears, especially in the late game. The Zone does shrink every round, and dogfights in the final minutes are often tight-spiraling acrobatics trying to balance keeping a bead on your opponent and staying within the restricted area.

There are no bushes to hide in or buildings to camp out in, so you have to use the verticality of the map and the mountainous terrain to your advantage if you want to stay out of sight of other players. Because of this, players often appear on your minimap but out of sight on your actual screen, which means that you have to have exceptional map awareness if you don’t want to get dropped in on. I can’t count the number of times that I saw someone heading towards me on my minimap, only to realize all-too-late that they were several hundred feet above me.

The other major map event has bombers sporadically appearing throughout the game, dropping a trail of useful items and upgrades in their wake, while simultaneously unleashing devastating heavy cannon barrages on any player unfortunate enough to veer too close to their run. You have to actively open your map to see where the bombing run will be located, and then zip over there if you want to take advantage of it. Much like supply drops in other games, you can expect to find company upon your arrival.

Dogfighter -WW2- is a solid looking game, but the attention to detail seems to stop at the planes. The environment and landscapes aren’t the most clearly defined, and after watching the launch trailer which showed environments in crisp detail, I was left a bit surprised when other than the planes, everything seemed to be in a lower-resolution state. I’m playing on the PS4 Pro so I have no shortage of graphical capabilities in the system, but the contrast of the poorly defined environments versus the higher definition of the planes was slightly off-putting. This doesn’t detract from the gameplay at all, but it feels like the environments could use a little more attention to detail.

When it comes to affecting gameplay, the biggest graphical issue is the draw distance, and enemies and environmental objects will sometimes pop into view. This doesn’t seem to happen consistently, but I noticed it on several occasions especially when there was a lot happening on screen. You can occasionally only see enemies by the yellow E icon above their heads when they are at a certain distance, and even though you can lock-on a Chase sequence it can make it much more difficult to actually hit someone. In addition to this, enemies that are further away sometimes stutter in their movement as opposed to the fluid movement of those within a couple hundred feet. This also can make it hard to judge your shot pattern and successfully train your guns on an opponent.

I was given a hefty chunk of premium currency from IGGYMOB so that I could outfit my plane with some stylish skins and purchase the premium AirPass, but I think that the premium store itself needs some work. Skins can only be applied to specific planes, and the “Wearables” section only contains comically large headsets to put on your plane. There are a wealth of decals that you can customize with to give your craft a unique look, but it feels like there could be a lot more in the store to make the premium currency worthwhile. It has only been a week since the game’s release, so I hope that we’ll see additional cosmetics in future updates or seasons. The AirPass is arguably the best premium purchase in the store, not just because it puts you on the track to earn some solid rewards in the way of premium DF Points, decals, and other cosmetics, but because it unlocks all of the additional planes — 14 in total — which greatly increases your arsenal.

The store itself is divided into items you can purchase with DF-Coins — Dogfighter‘s in-game currency — and items you can purchase with DF-Points; premium currency which you have to buy, or earn slowly through the AirPass and Daily Login bonuses. It can take a little time, but unlocking skins and decals in the DF-Coins store is very manageable, and for the PlayStation 4 release users are treated to a bonus cache of Coins upon launch, which can purchase their first few skins. On the Premium side, it typically costs between $10 and $25 to purchase a premium skin for your plane, and as mentioned, these skins are specific to a certain plane.

I opted for one of the more flashy, neon skins in the library, because as someone who never has premium currency in a game I wanted to have the flashiest plane in the skies. While I definitely felt like more of a target against the camouflaged green and grey colour scheme of most other planes, flying around with my customized A6M Zero that looked straight out of Tron made me feel epic as I whizzed around opponents dodging strafing runs.

Apart from the graphical issues which occasionally hindered the gameplay, I had a lot of fun with Dogfighter -WW2- and will assuredly be adding it into my rotation of games. I am confident that with a little bit of polishing it could turn into a stellar entry into the Battle Royale genre, and serves as a perfect example of the things that developers can achieve if they break outside of established molds. I know that I’ll be spending much more time in the skies perfecting my aerial maneuvers so that I can keep bringing home those wins.

Held back only by some graphical hiccups, Dogfighter -WW2- is an engaging entry into the Battle Royale genre that builds on established BR systems to present something new and refreshing.

Dogfighter is a free-to-play game, but the reviewer was given digital currency by the publisher to purchase the AirPass and cosmetics.