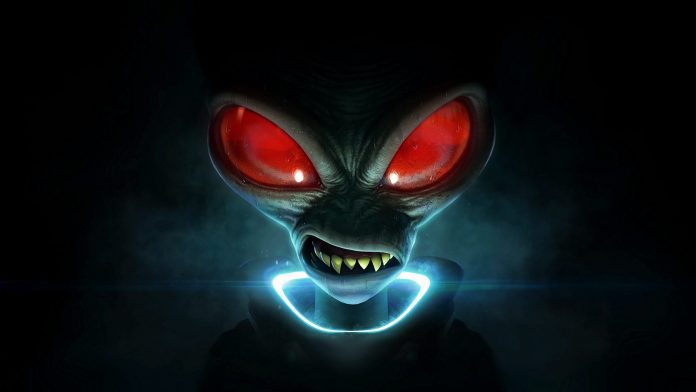 It’s been fourteen years since we last took control of Crypto-137, and used his alien arsenal to reign down terror upon the unsuspecting masses. The 1960s were such a magical time: nuclear families with white picket fences, the Red Scare, McCarthyism, and the ever-looming threat of nuclear disaster. Who ever thought it would be a little green…er…grey alien that would end up causing the most damage?

I’m just going to come out and say it: Destroy All Humans! is a ridiculous amount of fun. Almost more than it should be. Almost. The game hearkens back to the over-the-top arcade-style of gaming that was much more common in the early 2000s, without getting into overly-complicated systems and concepts that are the norm in today’s open world games. With a wealth of interstellar weapons, a tricked-out flying saucer, and a desire to reap vengeance across the continental United States, does one really need anything else?

For the uninitiated, in Destroy All Humans! you take control of a member of the Furon race, Cryptosporidium-137 (Crypto for short) in order to retrieve the body of your fallen comrade which is being held in Area 42. And, of course, to enslave humanity while you’re at it. With the guidance of your benevolent leader Orthopox, you’ll travel to six different miniature open worlds to wreak havoc with some of the most entertaining sci-fi weapons in gaming, all to the backdrop of a spectacularly voiced and exceptionally funny narrative.

Fans of the original 2005 release will be overjoyed to see how well the 2020 remake holds up the their first invasion. In every single way, Destroy All Humans! perfectly recaptures the essence of the original game. You’ll hear the same jokes delivered by the same voice actors, run through the same over-the-top missions, and use the same arsenal of high-power space weaponry. It’s magical. I was fully expecting there to have been some liberties taken with the world construction, Crypto’s weaponry, or even with the narrative, but everything has just been upgraded and polished for the current generation of gaming.

It’s a quasi open-world format that sees Crypto traveling from rural farming communities, to the sunny shores of California, and top-secret government facilities to try and usurp the locale authorities secure Crypto-136, your fallen precursor. Each locale has several relatively straight-forward goals to accomplish, alongside some optional goals which will net Crypto additional human DNA to be used on purchasing upgrades. To uncover the location of 136 and further the Furon goals of planetary domination, Crypto will have his hands full.

You’ll be investigating the appearance of mysterious dark brown-suited men, taking over the airwaves to broadcast your message of “peace”, controlling the feeble minds of the populace, and of course causing death and destruction at any and every given opportunity. You won’t have to enslave the human race alone though; Pox has a wealth of weapons at his disposal that he gifts to Crypto throughout your adventures, each of which has a devastatingly fun effect on the local populace. The DNA that you secure through your main missions, as well as finding long-lost alien probes, will allow you to upgrade your weapons and saucer in between missions.

In order to effectively enslave the human race however, it’s important to assimilate oneself with the locals to better learn their customs, and weaknesses. For this reason, Crypto can create a holographic copy of a target to assist in any stealthy incursions called a HoloBob; or perhaps just if you’re feeling fancy. This body-swap not only allows Crypto to explore without having to worry about anyone recognizing him, but can grant access to restricted areas if you’ve snatched the right disguise.

You can also take to the sky in your Saucer, and systematically level entire blocks of urban development using equally devastating weapons like the Death Ray or Quantum Deconstructor. The entire environment is destructible, which is something we don’t see near enough of nowadays. Once you’ve unlocked Explore for a location, you can freely traverse the area without any objective-constraints, taking on Challenges or just probing people — or perhaps bovines — at your whim.

As fun and campy as the actual main missions are, where Destroy All Humans! feels the best is as an open-world alien playground, where you’re free to go about abducting, incinerating, body-snatching, and just plain wreaking havoc in a colourful assortment of ways. It’s the same reason that kept me going back to the originals after all these years, and the opportunity to experience a wholly revitalized gameplay just feels stellar.

The team at Black Forest Games have done their absolute due diligence to honour Destroy All Humans!, including fine-tuning the original dialogue so that they wouldn’t have to re-record voice lines. It wouldn’t have felt the same without the faux-Jack Nicholson sarcasm delivered by J. Grant Albrecht, and of course the hilarious insults flung by Pox, voiced by Richard Steven Horvitz who voiced Zim from Invader Zim.

Even though every thing is essentially the same, it feels so much better. And this is exactly what developers should be aiming for when they are trying to remake a classic game while staying completely true to the original. We’ve seen a wealth of missteps throughout the years, where developers failed to live up to their original game, or conversely added in new features that no one asked for which upset the original game balance. Destroy All Humans manages to both perfectly capture the humour and gameplay of the original 2005 release, while having the game genuinely feel like it was released in 2020.

I shouldn’t say there haven’t been any additions however, because the new game features a previously unreleased mission set in Area 42, where you have to stop the humans from creating their own flying saucer. There are additionally a number of new challenges that Crypto can take on when re-visiting locations in Explore, from inflicting the maximum number of casualties with Rampage, bringing specimens back to the Mothership with Abduction, or causing unparalleled property damage with Armageddon. These are the type of additions that only serve to enhance the core gameplay of Destroy All Humans! because they give us more opportunities to interact with the world in a less constrained fashion. Exploring the six locations not only gives access to the four challenge modes, but allows players to destroy all humans at their leisure.

This isn’t to say that the remake is without its issues. I encountered a handful of floating NPCs in my travels — typically when they should have been sitting on a bench, or in a car — and remaining faithful to the original release means that we haven’t seen any major quality of life improvements to the more rudimentary missions structures or AI behavior outside of a new target lock, which is helpful but ultimately unnecessary because of how combat typically flows. I didn’t find that the lack of more updated systems detracted from my overall enjoyment of the game, but they would likely be more noticeable to gamers who hadn’t experienced the 2005 invasion. Personally, I enjoyed the return to form.

If you’re the type of gamer who likes a good value-dollar argument as well, for half the price of what most games cost nowadays, Destroy All Humans is a planetary steal. Staying true to the original game, it’s not the longest title in the galaxy, (I probably clocked in about 13-15 hours before writing this review) but Black Forest Games have added a number of reasons to go back and explore the six open-world areas. There are additionally some new skins that you can unlock for Crypto by completing all of the optional objectives on specific stages. Mootivational, isn’t it?

Destroy All Humans! is an absolutely faithful remake of the 2005 release, that manages to simultaneously stay true to the original while advancing the graphics and game systems to make it feel like a current-gen title. While aspects such as the mission structures and AI behaviour definitely still feel dated, this return to a more classic game design presents the player with simple yet delightful entertainment.

I had a blast playing through Destroy All Humans!, and I genuinely feel that both fans of the original and newcomers to the series will find a wealth here to enjoy. What other game allows you to take control of the other side of an alien invasion and trounce through a playground of destruction with a variety of over-the-top weaponry alongside a hilarious cast of voice actors? It’s an experience you won’t find elsewhere, and after completing it I am hopeful that we will see the same caring service applied to Destroy All Humans! 2 in the coming years.

Destroy All Humans! should be part of the textbook for developers who are looking to recapture the magic of their classic games.