GIANTS Software has released its 10th and 11th fact sheets, in keeping with the developer’s commitment to share a set of detailed information on equipment each week in the lead-up to Farming Simulator 19’s November 20 release date. Previous “Fact Sheet Friday” posts can be found here:

This set of fact sheets shows off a New Holland skidsteer loader, a Valtra T-Series tractor pulling a Kuhn manure spreader, and the highly-anticipated and highly-requested Krone Big M mower. 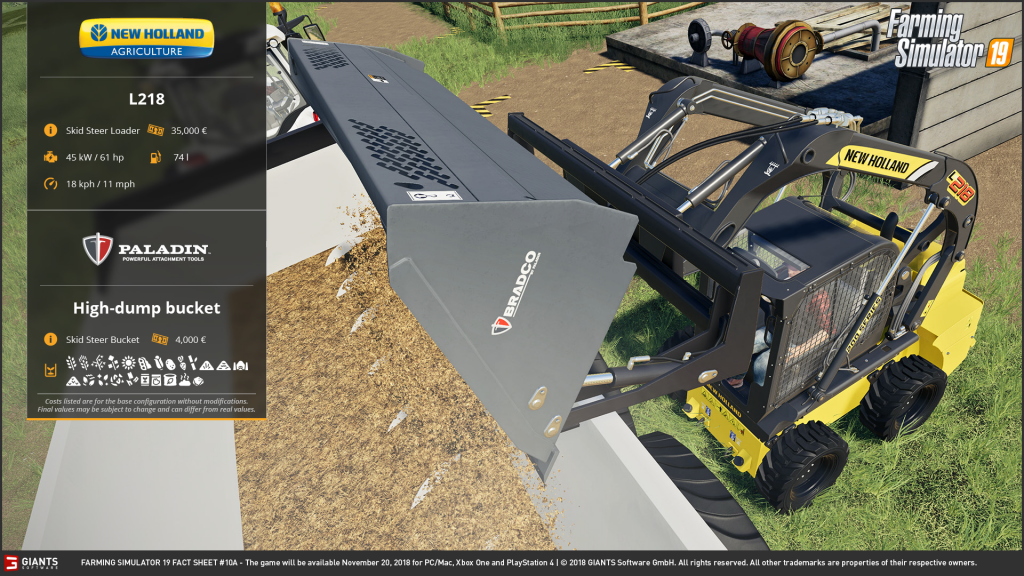 Skid steers were introduced in Farming Simulator 17, and provided players with a good option for a small, affordable loader for tasks such as feeding animals, loading pallets, or stacking bales. Due to their slow movement speed, these machines are best left in one area of the map (e.g., near the cow enclosure) to be used for tasks around that part of the farm when needed. Otherwise, you’ll likely want to load the skid steer on a trailer and truck it to wherever you need it.

JCB’s skid steers were featured in Farming Simulator 17, and it’s nice to see another brand join the mix with New Holland adding their L218 to the game’s lineup. The Paladin high-dump bucket looks quite useful, since it features its own hydraulic system to dump, and is less likely to get caught on the edge of tippers or whatever the player is dumping material into. It can pick up pretty much any material in the game, and is shown loading manure into the Kuhn manure spreader… 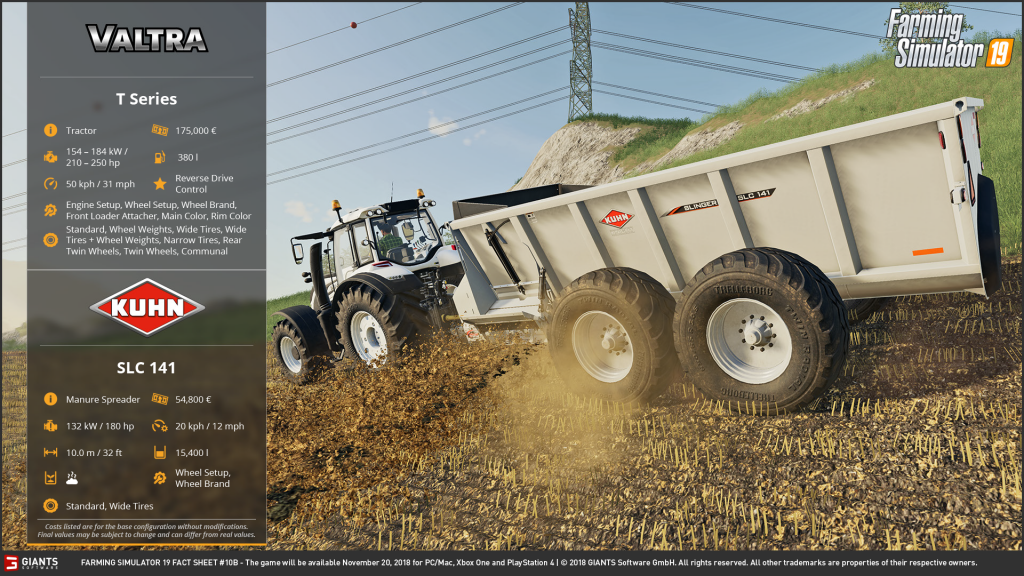 Many players, myself included, have felt that this type of manure spreader has been underrepresented in past Farming Simulator games, so I’m happy to see the Kuhn SLC 141 here. A relatively mid-sized manure spreader, this should provide a good option for players running a similarly mid-sized operation. Manure spreaders are quite handy,as they allow you to spread the manure generated by animals on your farm as a form of fertilizer, which helps avoid the need to purchase solid or liquid fertilizer. Since the spreader only has the option of standard or wide tires, you’ll want to use the manure spreader to fertilize your crops before you plant them, or else risk destroying some along the way.

Also shown in this fact sheet is the Valtra T Series tractor, which had its first appearance in Farming Simulator 17 with the introduction of the AGCO lineup of tractors. Valtras quickly gained a reputation in the Farming Simulator community as a versatile tractor, capable of performing many tasks and allowing for significant customization. Given the sheer number of options listed on the fact sheet, it’s safe to say that this has been maintained in Farming Simulator 19. The T Series will allow for a wide array of wheel setups while providing several options for engine power and also offering the ability to attach a front-end loader. In addition, players will be able to customize both the main colour and rim colour of the Valtra, effectively allowing them to make it look however they’d like. 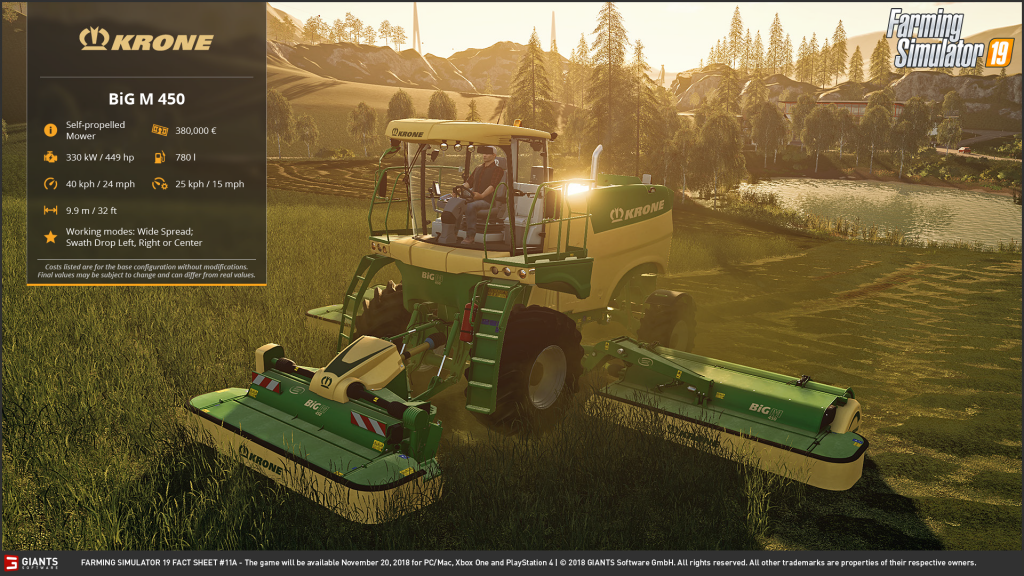 The Krone BiG M was included in the equipment lineup in Farming Simulator 13, but was noticeably absent from 15 and 17 (though it did appear in both games later on as a player-created mod). Many players were happy to see the BiG M featured in the Gamescom gameplay trailer, and now we get to see the details on this beastly mower. With a working width of 9.9 metres (32 feet), it’s slightly smaller than the Pottinger three-mower combination seen in Farming Simulator 17 (which spans approximately 11.5 metres, or 38 feet), however it’s self propelled and won’t require an additional tractor to run.

The Krone BiG M also offers the ability to choose between several working modes, such as wide spread, and dropping a swath (also known as a windrow) either to the left, right, or center of the machine. This will allow players to work more efficiently in their hay fields, choosing how and where to lay down the cut grass to be baled or picked up by a loading wagon. And with a working speed of 25 km/h (15 mph) this machine will make quick work of even the largest fields.

That’s all for this week’s Fact Sheets, check back each Friday for more! Scholarly Gamers will be covering all the news on Farming Simulator 19 leading up to its release, so be sure to stay tuned for more.